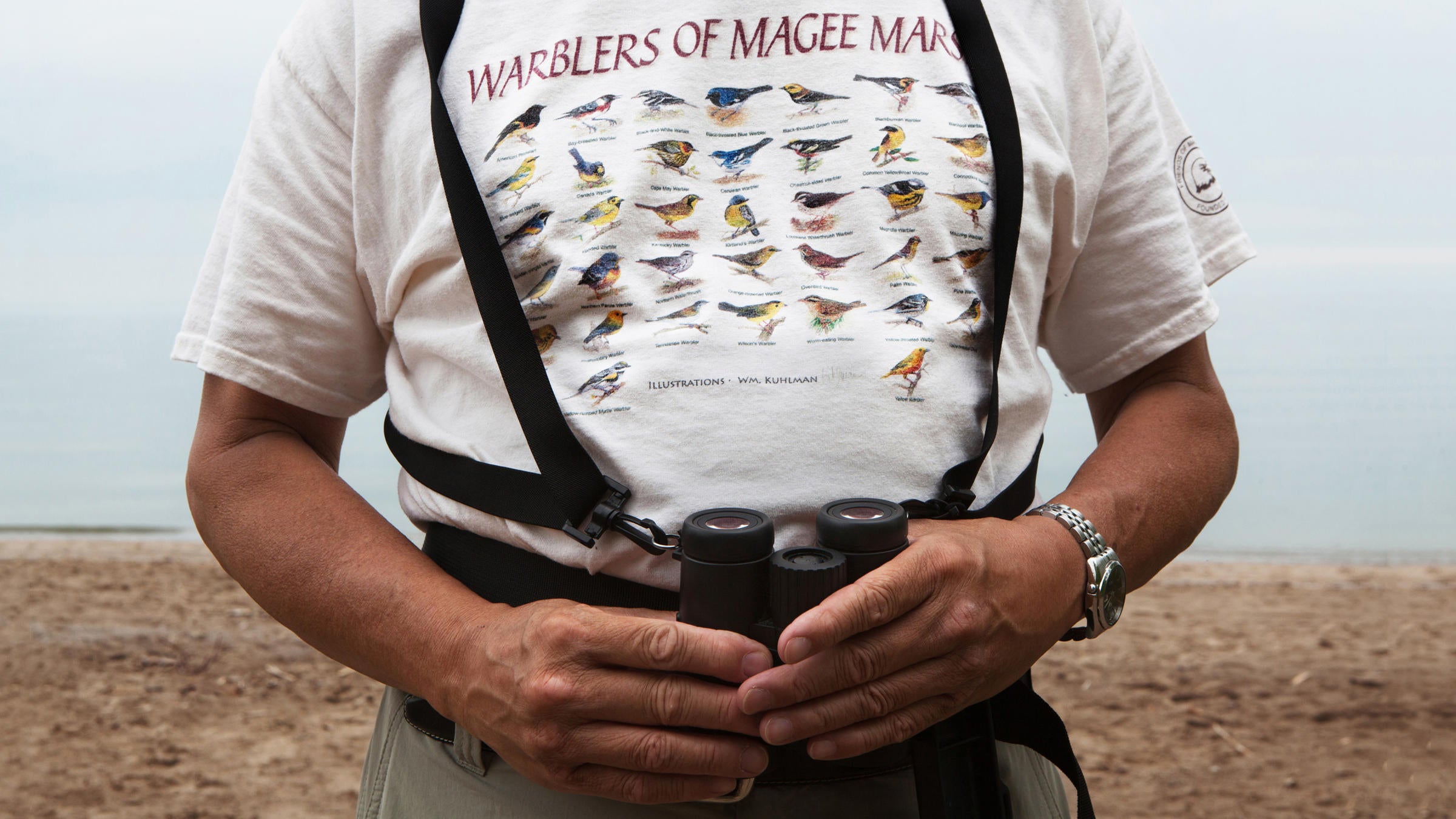 Every May the quiet little town of Oak Harbor, Ohio, turns into a madhouse. More than three dozen species of warblers—the males decked out in their flashiest breeding plumage, the females trying not to look too impressed—stop to rest and refuel among the box-elders, elms, and Kentucky coffeetrees in Magee Marsh after a grueling migration. Close on the parulids’ tiny heels come the human warbler geeks. Laden with fancy cameras, giant scopes, and two-pound warbler guides, the groupies descend on this 2,000-acre wetland at the foot of Lake Erie for a 10-day festival known as the Biggest Week in American Birding.

This spring some 75,000 birdwatchers ventured to the region, and about 2,000 of them showed up for the Biggest Week, when as many as 37 warbler species pass through. With thousands of rabid birders and thousands more of their highly mobile quarry crammed onto a mile-long boardwalk, things at Magee can get rowdy. When word spreads that a Mourning Warbler has surfaced on the east end, for instance, the crowd surges in a way that could capsize a ship, desperate for a glimpse of the black-bibbed bird playing coy in the undergrowth. Doting fans stalk the boardwalk in droves, ranting about Worm-eating Warblers, chanting out the GPS coordinates of a wayward Kirtland’s.

A lucky few attendees are shepherded around by birding legends during sold-out workshops and tours; when they’re not busy coaching, VIPs mingle with the masses. Kimberly and Kenn Kaufman are quickly buried in hugs, handshakes, and to-be-autographed field guides (she is the executive director of the local Black Swamp Bird Observatory, which hosts the Biggest Week; her spouse is Audubon’s renowned field editor). The Crossley ID Guide’s Richard Crossley crouches to help an eight-year-old boy learn to tell the difference between a Scarlet and a Summer tanager, while nearby, Tom Stephenson and Scott Whittle, authors of The Warbler Guide, happily parse birdsongs for their riveted fans. Actress Lili Taylor is here, doing double duty as a festival attendee and a judge for the tattoo contest (the best bird-inspired ink wins a pair of prized binoculars; contestants then head off to a fierce karaoke throw-down).

“This ain’t your grandma’s birding festival,” says Kenn Kaufman. (Tell that to 73-year-old Ilene Meyer, who scandalized her husband by getting a Baltimore Oriole tattoo. “He said, ‘Over my dead body,’ so I got one,” she recalls proudly.) “Many people refer to it as Warblerstock,” adds Kim, who used her Ohio-farm-girl work ethic to transform the fledgling festival into a powerhouse event in just six years. She’s the brains behind the Birds and Business Alliance, a network of local shops and companies that gets a healthy boost from the bird migration, which brings an average of $37 million to the area’s economy each spring. Proceeds from the Biggest Week itself, a more modest $40,000 or so, benefit the BSBO’s research and education programs as well as the festival’s conservation partners, which include the Snowy Owl Project and the Save the Golden-Wing Project. 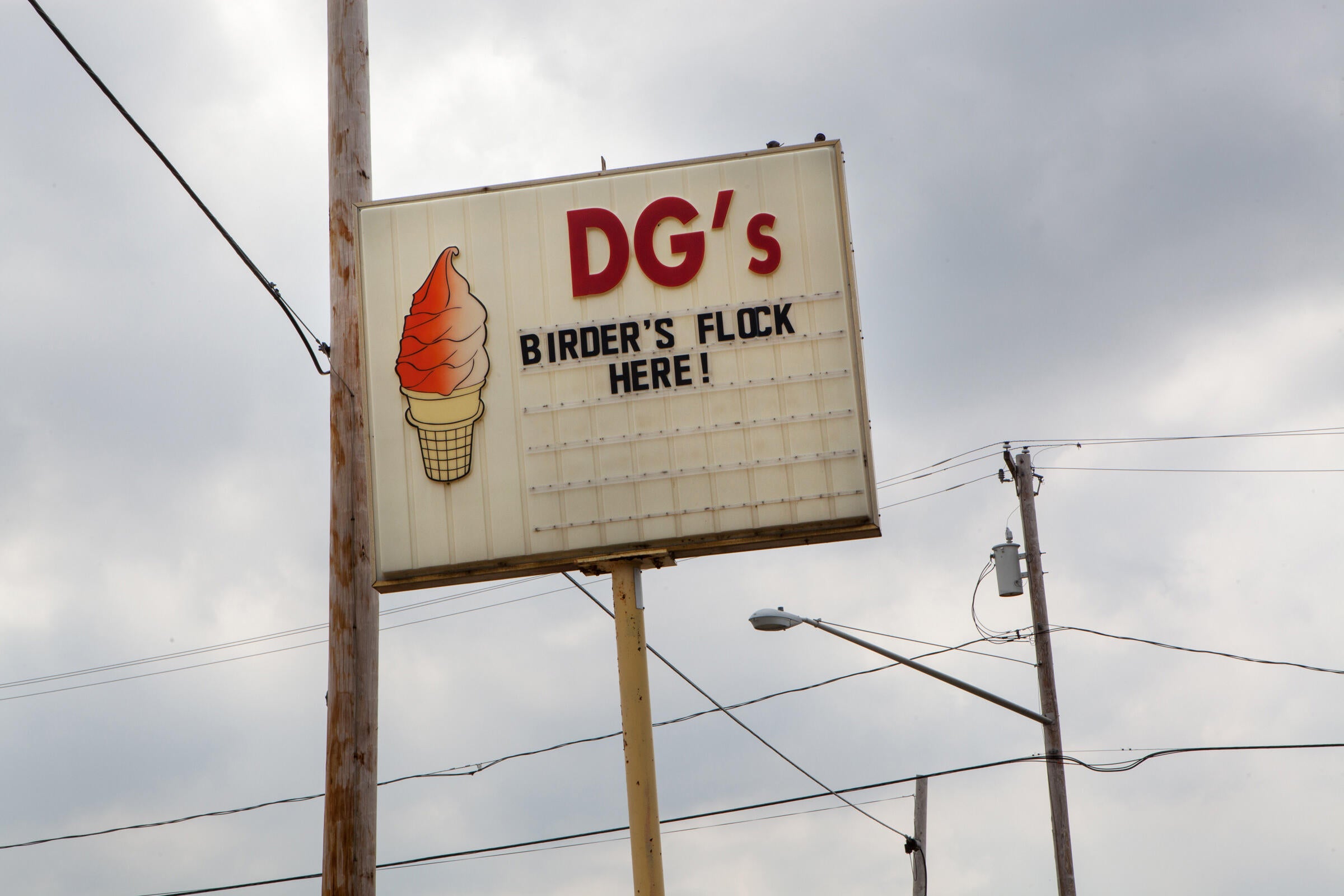 During the festival, the towns neighboring Oak Harbor, Ohio, roll out the red carpet for birders. Tourism timed to the annual spring migration pumps millions of dollars into the local economy. Photo: Camilla Cerea/Audubon

While The Warbler Guide’s Stephenson is too humble to comment on his own star power—one 64-year-old man can barely contain himself after catching Stephenson’s birding-by-ear class—he certainly understands why warblers have so many groupies. “Warblers are sexy,” he says. “That’s why people love the hell out of them.” As if to prove his point, a male Blackburnian shimmies along the branches of a nearby dogwood, baring its flaming chest in a kind of bird burlesque.

The warblers, of course, don’t care about their human worshipers. They’ve got more pressing agendas. Some, like the Yellow, Black-and-white, and Prothonotary warblers, will nest in Magee and neighboring marshes, while those that prefer conifers will make a break for boreal forests in Canada. Others, such as the rugged Blackpolls, will travel all the way to the Arctic Circle. “The birds are programmed hormonally and instinctually to leave based on day length,” says Mark Shieldcastle, the BSBO’s cofounder and research director. “They have it down to the microsecond.”

No matter the species, the journey is risky; 80 percent of migrants don’t make it, explains Shieldcastle. But those that do probably hit the same stopover sites every year. In 2006 the BSBO banders caught six Blackpolls that had been previously tagged at the station. Recaptures represent a slim fraction of the birds nabbed in mist nets each season, but they show how valuable these marshes—replete with insects, water, and low-hanging foliage—are in the long run. According to Shieldcastle, “This area might be the most important habitat these birds have during migration.” 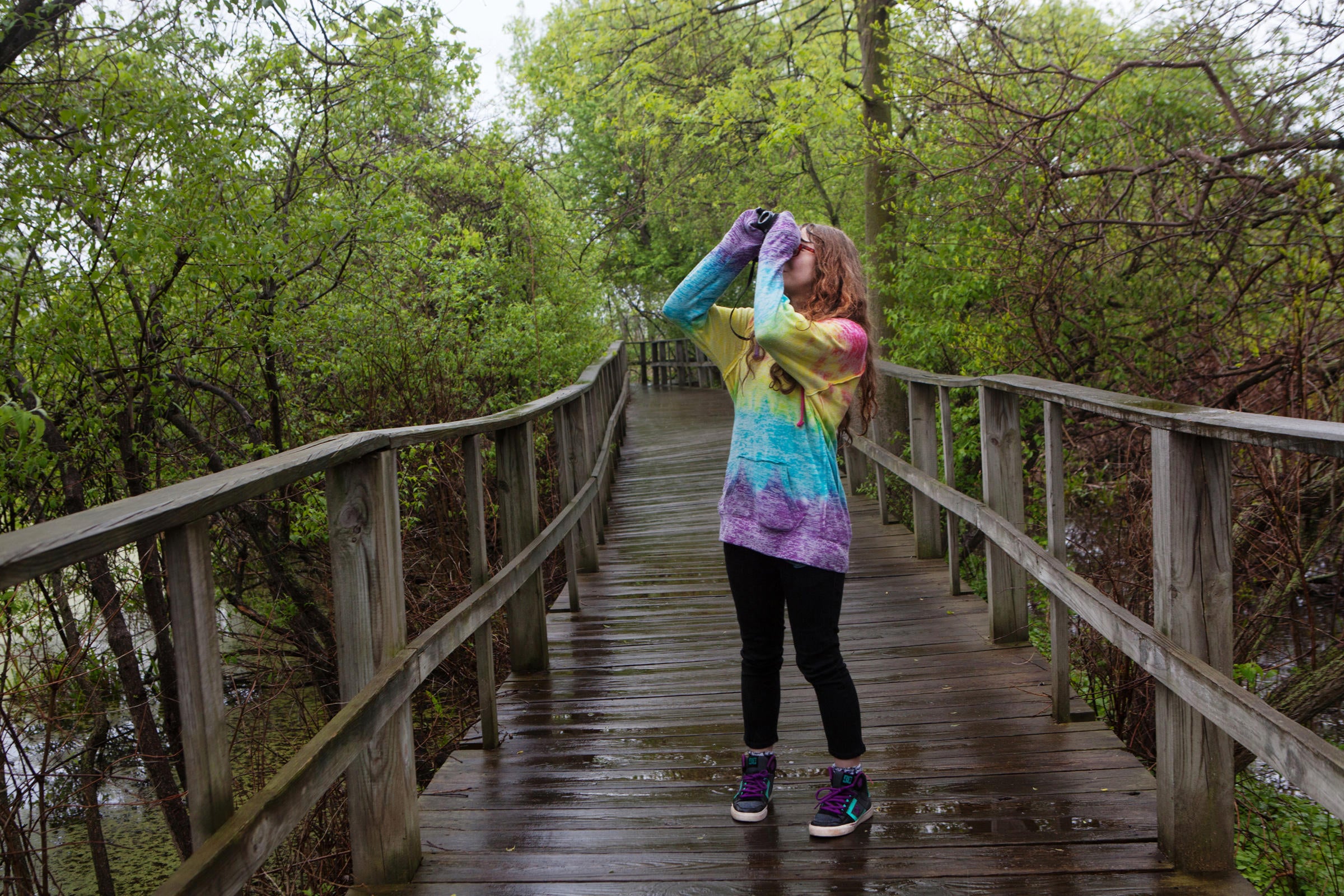 Even as the festival rolls on, Shieldcastle and his dedicated team of banders work behind the scenes, tagging birds, as they have seven days a week every spring and fall for nearly a quarter-century. The data they’ve collected on more than 500,000 individuals provide a crucial record of how and when warblers use this stopover habitat—one station on a lengthy biannual journey that scientists are just beginning to unravel.

Geolocators have revealed that every winter the most far-ranging of these thin-beaked insectivores, like the Louisiana Waterthrush, disappear into the depths of Central and South America. Come spring they do a complete 180, cruise over thousands of miles of water and terrain, and hide away in their breeding grounds in the far north. Just this past April scientists reported that GPS-tagged Blackpoll Warblers have shown that these birds are capable of covering 1,500 miles in 72 hours, fueled by a mega-calorie binge. That’s the longest nonstop oversea route documented in any land bird yet.

Although the travel plans of many warbler species remain a mystery, scientists think they know why so many end up in Magee. While coming over the Gulf of Mexico or along the Allegheny Mountains, the birds run into a spiraling wind cell, which forms from a mass of warm air-—pushed east by the jet stream—combined with warm fronts from the Gulf. The birds then ride the northeast-flowing current as it rises through the cool spring nights, ultimately funneling millions of migrants between the Mississippi and Ohio river valleys into northwestern Ohio’s Great Black Swamp.  There they hit 10,000 square miles of water—Lake Erie—and “get wet feet,” as Shieldcastle jokes, eventually deciding to crash or recharge for a bit. “It’s a geographic perfect storm.” 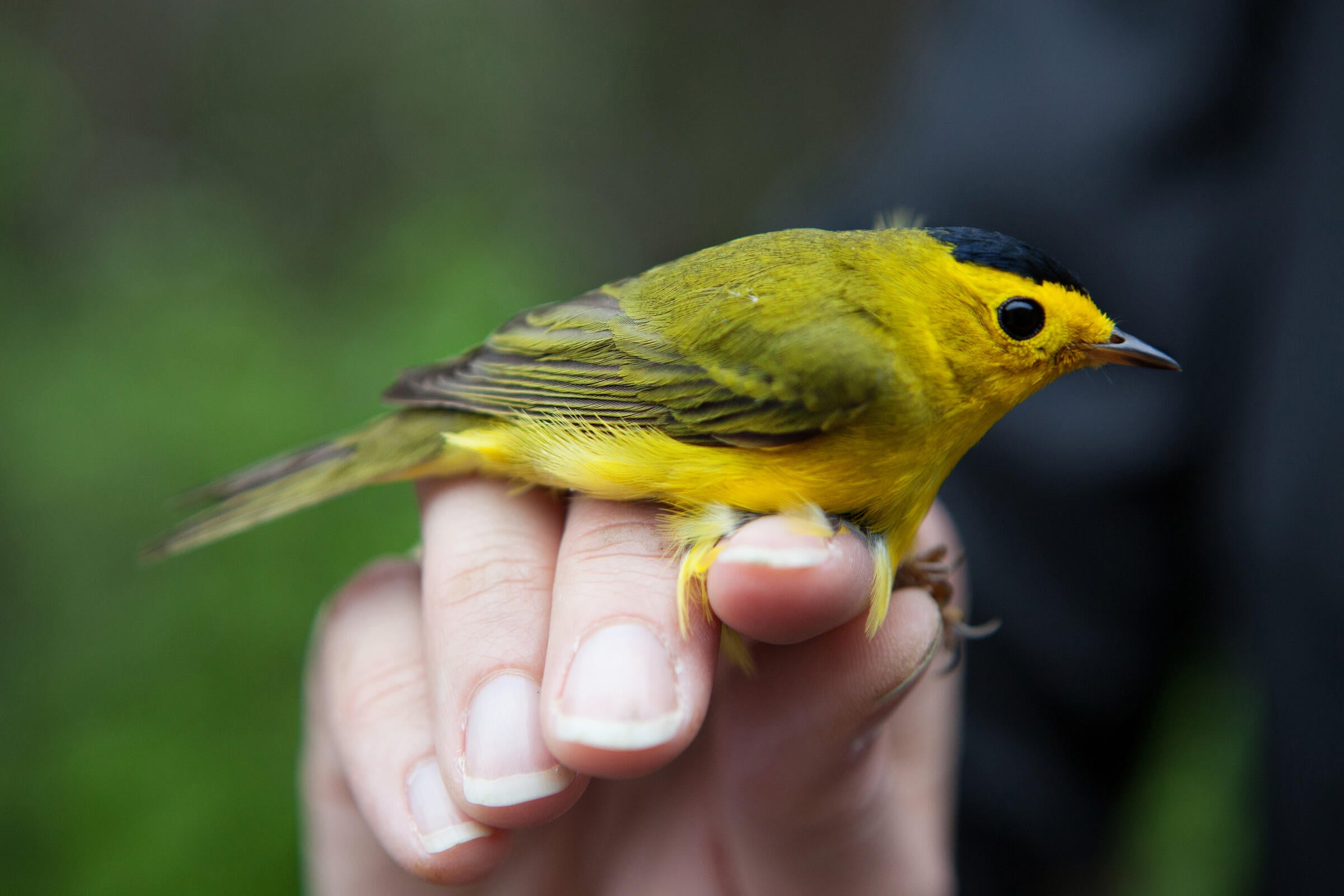 A male Wilson's Warbler, marked by a black toupee, during a banding demonstration at the Black Swamp Bird Observatory. Photo: Camilla Cerea/Audubon

Not all of the species arrive at once. Kyle Horton, a warbler researcher at the University of Oklahoma, says that these vernal wind cycles deliver new songbirds almost every week. In fact, BSBO scientists have separated the flood into three waves. (Each species sticks to a rigorous schedule based on its breeding patterns and internal clock.) The first, called the “overflight,” occurs in late April and consists of Yellow-rumped and Palm warblers, joined by males, mostly Yellow-throated and Kentucky warblers, that shoot too far and too early. This macho scene breaks up after a few days as the Yellow-throats and Kentuckies realize there are few females in sight and flee southward in search of company. The second wave, in early May, is the largest and contains the bulk of the mature males and females—many Magnolia Warblers and a wide range of other species. The final stage in the cycle brings straggling females and younger birds, loads of Connecticut Warblers, and pocket-sized flycatchers.

Wind patterns might give the birds a lift, but the journey is still exhausting. Magee has everything the birds need to recharge: The beach ridge protects the wetlands from floods, and is stocked with fuzzy flies called chironomid midges that are the warblers’ staple food source; coffeetrees, dogwoods, and other low, herbaceous plants provide great habitat for displaying and foraging. A single cypress tree might hold Northern Parulas, American Redstarts, and Bay-breasted, Magnolia, Black-throated Green, Black-and-white, and Cape May warblers. 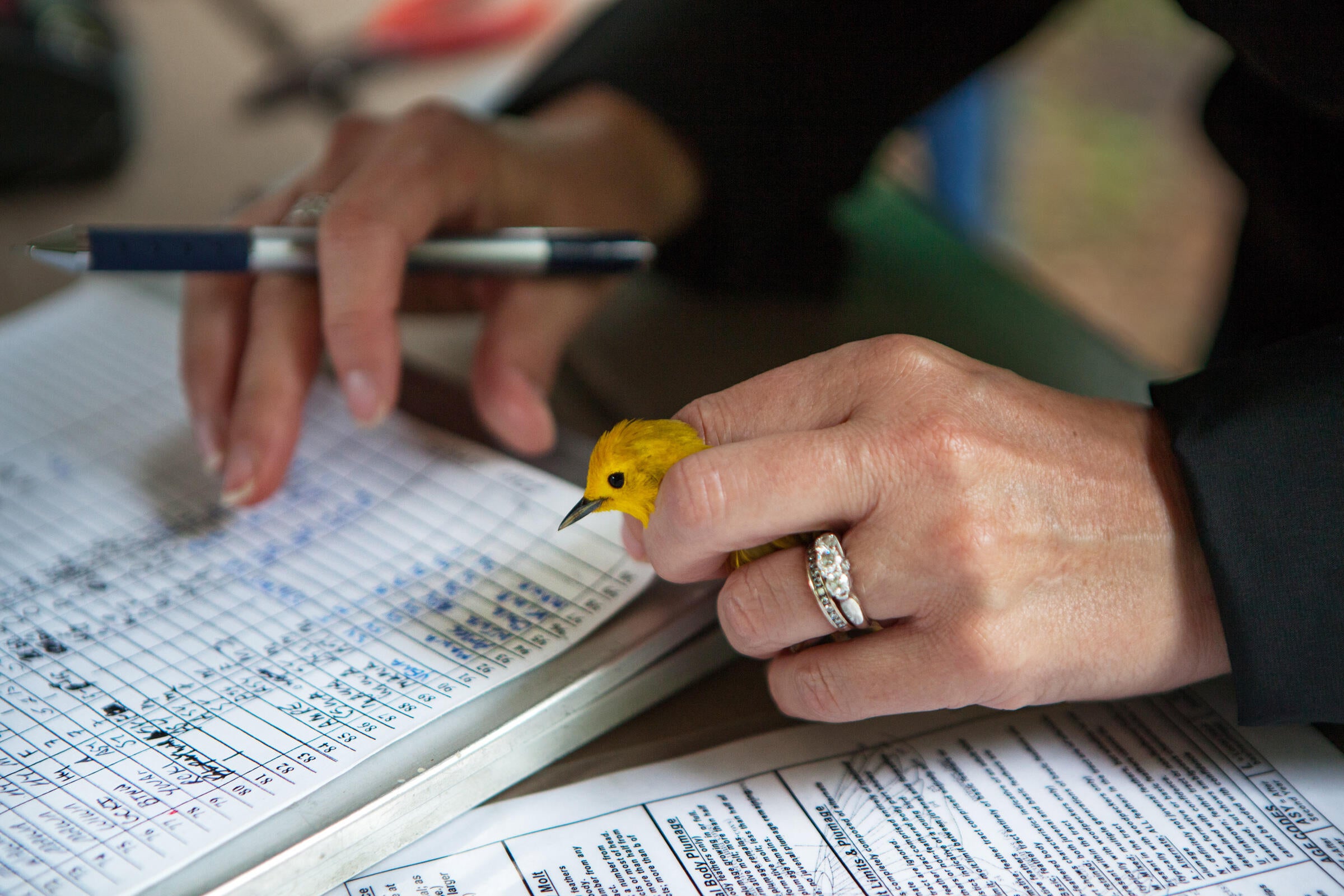 Kim Kaufman holds a Yellow Warbler, loosely but securely, in a "bander's grip" while recording measurements. Since the 1990's researchers at the Black Swamp Bird Observatory have amassed a goldmine of data on more than 500,000 migrant birds. Photo: Camilla Cerea/Audubon

That incredible diversity, plus the promise of coming eye-to-eye with a warbler, is what draws folks to the festival from all over the United States and 22 other countries. But Shieldcastle worries about the changes global warming might wreak on these travel-weary avians. As temperatures continue to rise, trees and insects may spring up sooner, meaning early birds will be rewarded and later migrants will have to fight to survive. “There will be losers,” he says, referring not only to the swamp and the birds that shelter there but to the warbler-crazed humans as well. Without its dashing Prothonotary Warblers (a five-inch bird with a seven-syllable name) and brawny Hooded Warblers (its beard is bigger than its face), Magee Marsh could lose its spotlight. Even the young birders, through all their wide-eyed excitement, are anxious about that possibility. Twelve-year-old Delaney Hayes, a BSBO volunteer who loves the tiny chapeau on the Wilson’s Warbler, is “worried that climate change won’t let [the birds] make it.” Once she graduates to banding in a few years, she’ll help to add to the understanding of how higher temperatures might be affecting them.

As long as the warblers keep returning to Magee, however, the groupies will keep gathering here every spring. They will leave no bird bling left un-bought, no Cerulean left unseen, no mom-and-pop ’80s track left unsung. Some will strap their babies to their backs—hello, Ging-Wargo family!—and some from warmer climes will wear mittens to battle the 60-degree “chill.” Doesn’t matter how: If the birds are here, the people will be here, too, and Warblerstock will live on.

Meet the Warblers Behind the Madness

Migration route: The Northern Parula is one of the most mysterious warblers when it comes to migration. They breed throughout the eastern half of the United States and the southeastern edge of Canada. Many parulas have been observed traveling through Florida in the fall to get to the Caribbean islands and eastern Central America, but no one knows for sure when they migrate to. The birds return early in spring, typically in March.

Habitat: Like the waterthrushes, this warbler sticks to swamps and slow-moving bodies of water, nesting in lichens and mosses.

Cool factor: The parula is a polite eater: After gulping down its prey, it usually wipes its bill on twigs and branches. But it's also got a boorish side—parulas are known to settle conflicts by slugging things out with an “aerial dogfight."

Migration route: The entire population moves down to the Bahamas and the Turks and Caicos in late summer and early fall. By May and June the birds are back in their North American range, which is limited to a tight ring around the Great Lakes. Michigan hosts the most individuals.

Habitat: This is species is highly specific to sandy, young jack pine forests, and is listed as endangered because of rampant habitat loss.

Cool factor: The Kirtland’s Warbler skips from twig to twig, using its fast feet to distract predators. Living in conifer forests also makes it a total sucker for pine sap and blueberries, when they're in season.

Migration route: The Northern Waterthrush's breeding grounds are mostly concentrated in Alaska, Canada, and Northeastern U.S. Then it travels over the Gulf of Mexico and Caribbean to winter in the mangroves of Central and South America and the Caribbean islands.

Cool factor: Despite its deceptive name, this little brownie belongs in the wood warbler family. Its tendency to hop rather than walk is a telltale sign of its warbler-ness. For example, if a path is too steep, the thrush turns to its side and starts hopping up—like a true Double Dutch champion.