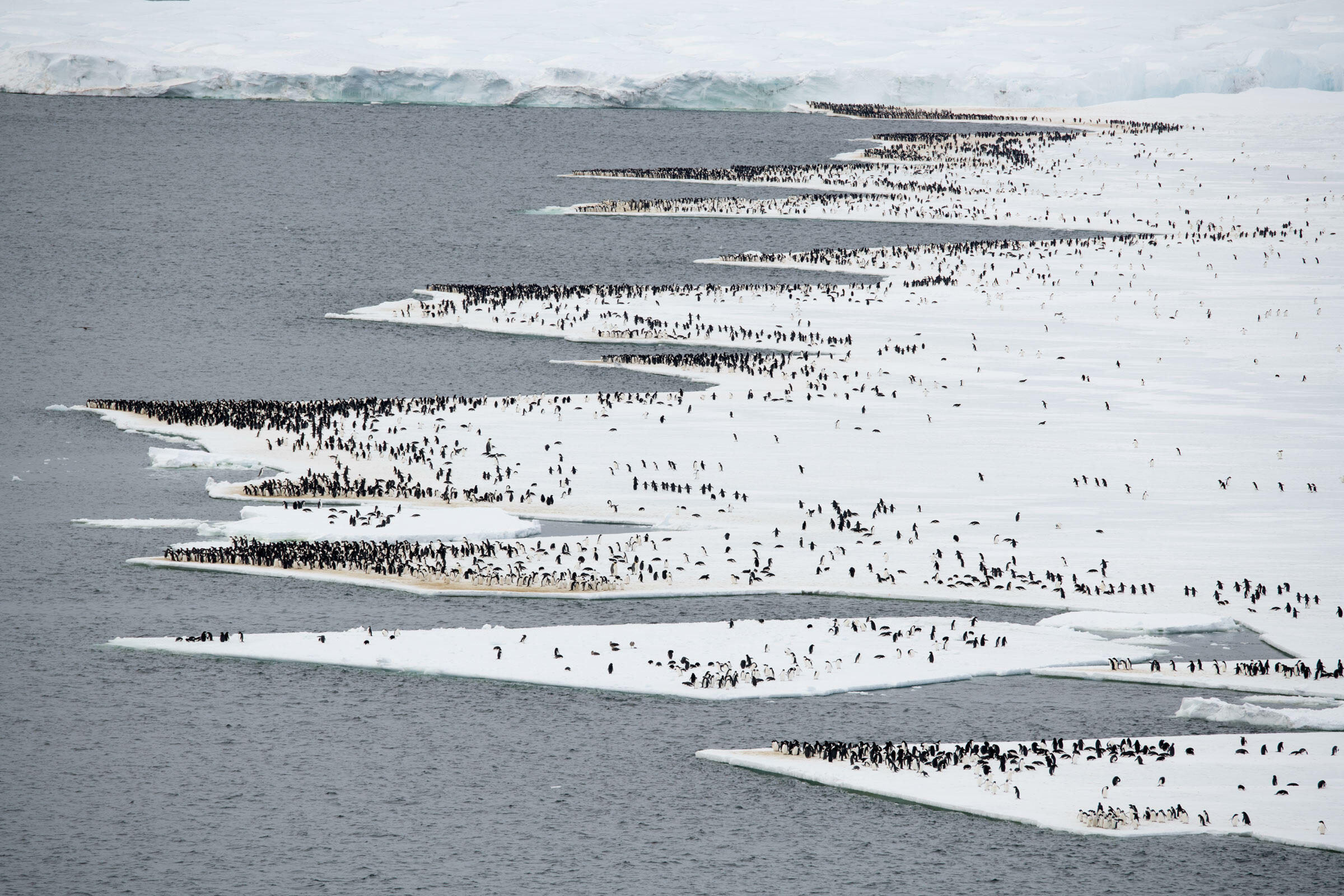 Follow Adélie Penguins On Their Journey Into the Long Polar Night

During the austral summer, Cape Crozier—a 40-minute helicopter ride from the McMurdo Antarctic research station—is home to a million or so Adélie Penguins. The curious and charismatic birds like to nest near productive open water to provide their fast-growing chicks with as much food as possible. Even in remote Antarctica, it would be hard for them to find a better site than here on the edge of the Ross Sea.

Considered the world's most pristine marine ecosystem, the Ross Sea teems with penguin food, like krill and silverfish, and their predators, including whales, seals, and other seabird species. This diversity of life thrives in waters far from the oil spills, nutrient runoff, invasive species, and destructive fishing that plague other marine areas worldwide. In 2016, 24 countries recognized the region's importance by protecting 600,000 square miles as the Ross Sea Region Marine Protected Area (MPA).

However, no MPA can protect Cape Crozier's Adélies from rising global temperatures, which are already reshaping the continent’s icescape and weather patterns. Climate models project that the Ross Sea's ice will persist longer than anywhere else in Antarctica—which potentially makes this breeding colony the species’ best hope of survival. “Adélies are sea-ice obligate and so as the sea ice goes, so does the species,” says penguin scientist David Ainley. Even as Adélie populations shrink on the Antarctic Peninsula, the Ross Sea population continues to grow: Its 870,000 pairs now make up one-third of Adélies globally.

For more than 20 years, Ainley and other scientists have been studying Adélies when they come ashore on this windswept landscape to breed. Yet where Adélies forage during the winter is mostly a mystery. A new study seeks to track the penguins’ behavior during the long polar night—information that could help conserve the species as climate change rapidly transforms the glacial continent. 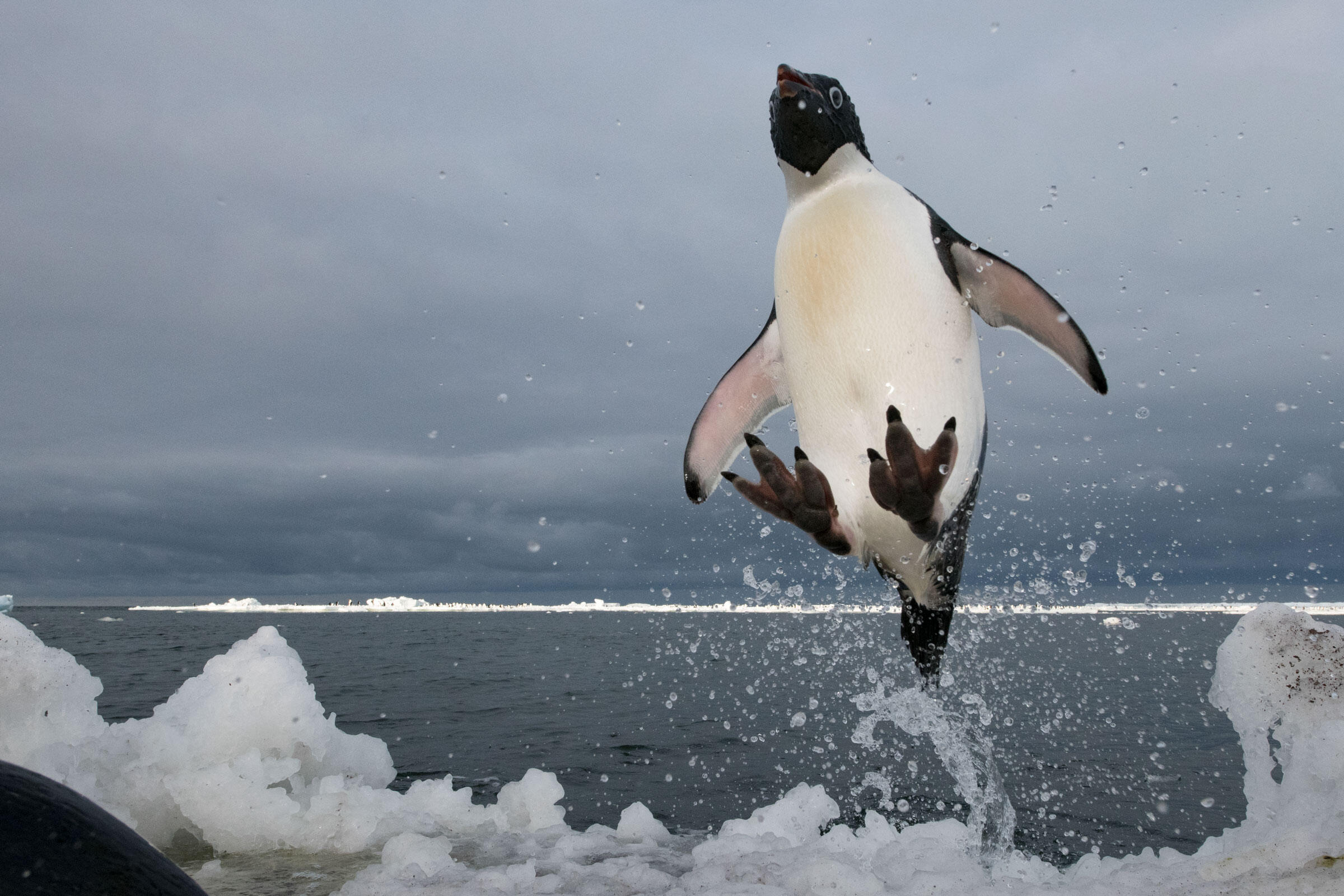 An Adélie Penguin makes an explosive return to Cape Crozier after hunting at sea for its chick. The black-and-white rocket can shoot six feet into the air to clear the ice edge in one jump; if it misses the mark or stumbles, it risks becoming easy prey for leopard seals patrolling below. When it returns to its nest, it regurgitates krill and silverfish into the mouths of one or two chicks, and then heads back out to sea or swaps places with its co-parent. Either way, the hunting never ceases—and neither does the chick feeding. That's because Adélies are visual predators that need light to hunt; indeed, their lifecycle is pinned to the light cycle. In the South Pole the summer sun shines 24 hours a day, which lets Adélie parents hunt around the clock. 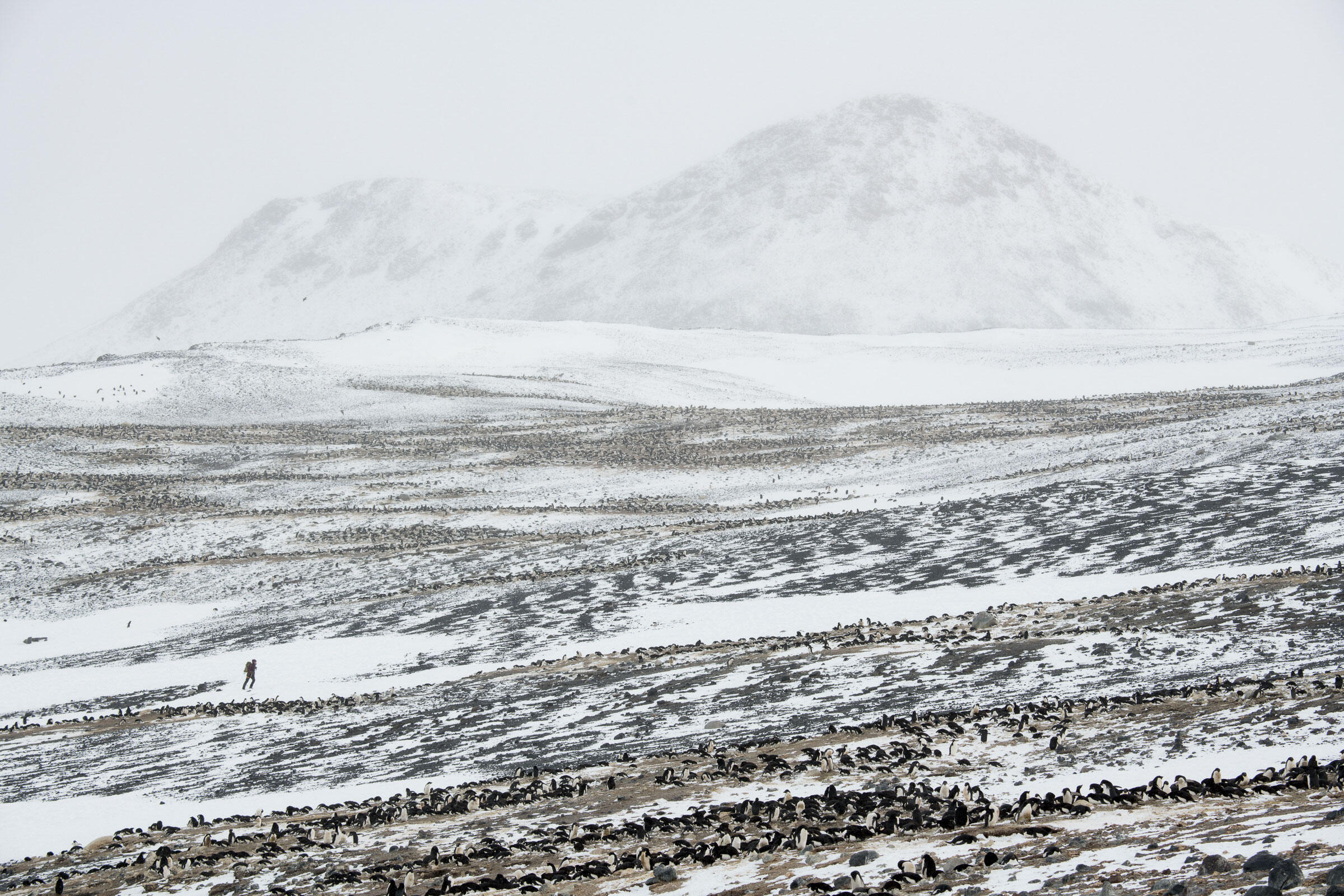 Annie Schmidt, who runs the Adélie Penguin ecology program for the nonprofit Point Blue Conservation Science, treks across the Cape Crozier colony during a storm. When collecting data in the field, scientists stay in a small wooden hut on a hill above the colony; otherwise, all that's out there is snow, ice, penguins, and the ocean. Every seven to 10 days, they lead a systematic search of the entire colony to take notes on any penguins sporting metal wing bands with an identification number. By tracking individual birds throughout their lives, researchers hope to understand how physical factors like ice cover influence chick survival.

Three years ago, the researchers turned to new technology to better track the penguins. They now attach an ankle tag, which records light, depth, and pressure, to 150 penguins each season. A small battery keeps the device collecting data for an entire year—until the following field season, when they remove the ankle tags and download the data to a computer. Schmidt can calculate the penguins' locations and hunting behavior from just light, depth, and pressure data.

These tags revealed for the first time where the penguins spend the winter: The birds migrate some 8,000 miles in a circular pattern, sticking close to the ice edge as it expands. This way, they ensure they have ice to rest on and also stay in latitutes with sunlight as Antarctica descends into winter's 24-hour darkness. "They’ve evolved to find this happy zone where there’s the right amount of ice and the right amount of light for them to forage," says Dennis Jongsomjit, a Point Blue researcher who's spent three field seasons at Cape Crozier. "If that shifts north or south a little bit by the changes brought about by climate change, that will have consequences on their ability to feed and survive." 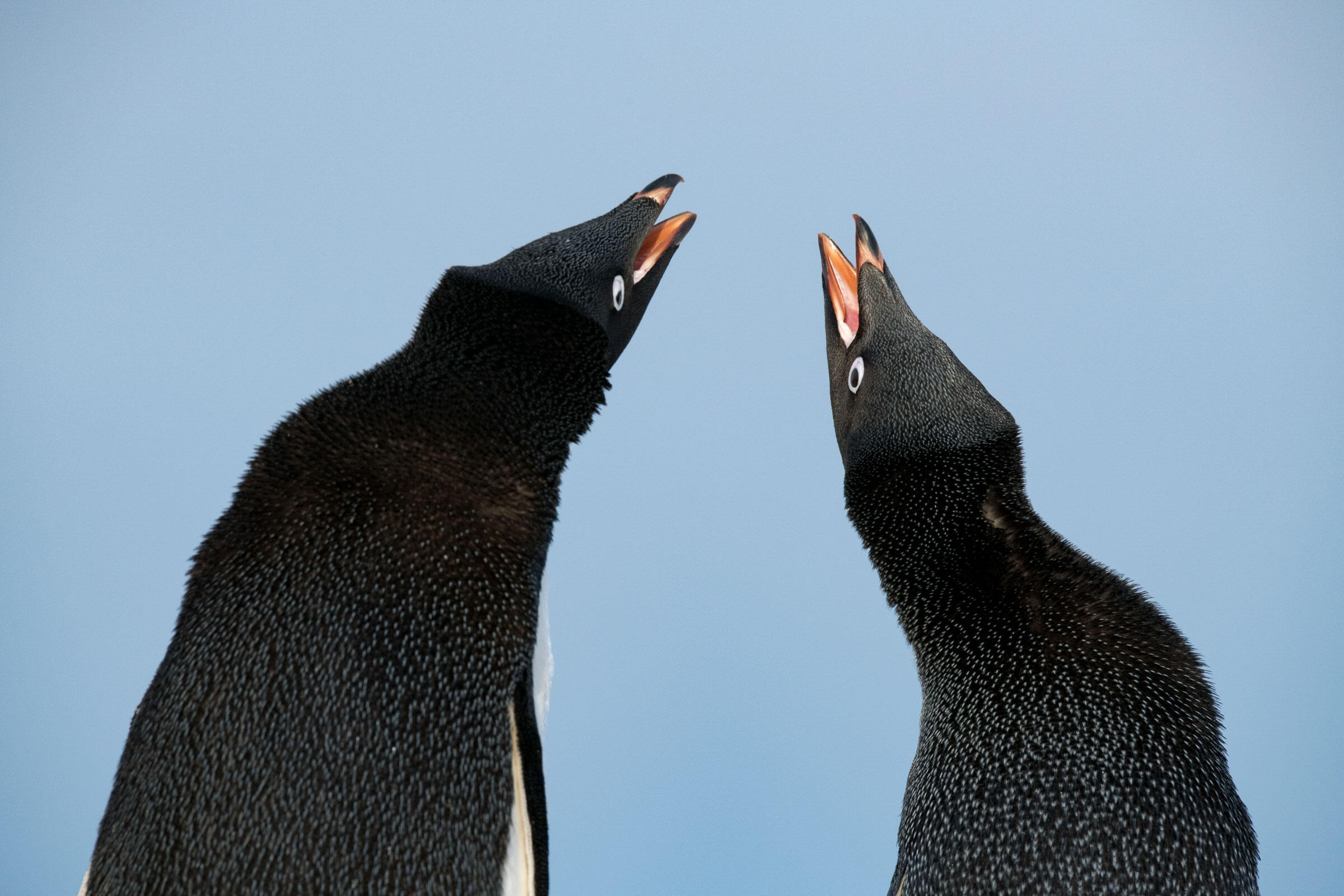 A pair of Adélies performs their greeting ritual, which precedes each nesting duty change and involves loud, staccato calls and vigorous head swaying. Adélie Penguins are faithful to their partners and also to their nest sites. They come back to the same nests every year, almost to the inch, Jongsomjit says. "In winter, they're swimming thousands of miles into the ocean, and then they’re coming back to the colony and finding the same nest they nested in a year ago," he says. That makes it easier for the researchers to re-find tagged birds and remove their ankle tags to download the data. "We know who’s going to be where," he says. "We have highly detailed maps that let us find them." 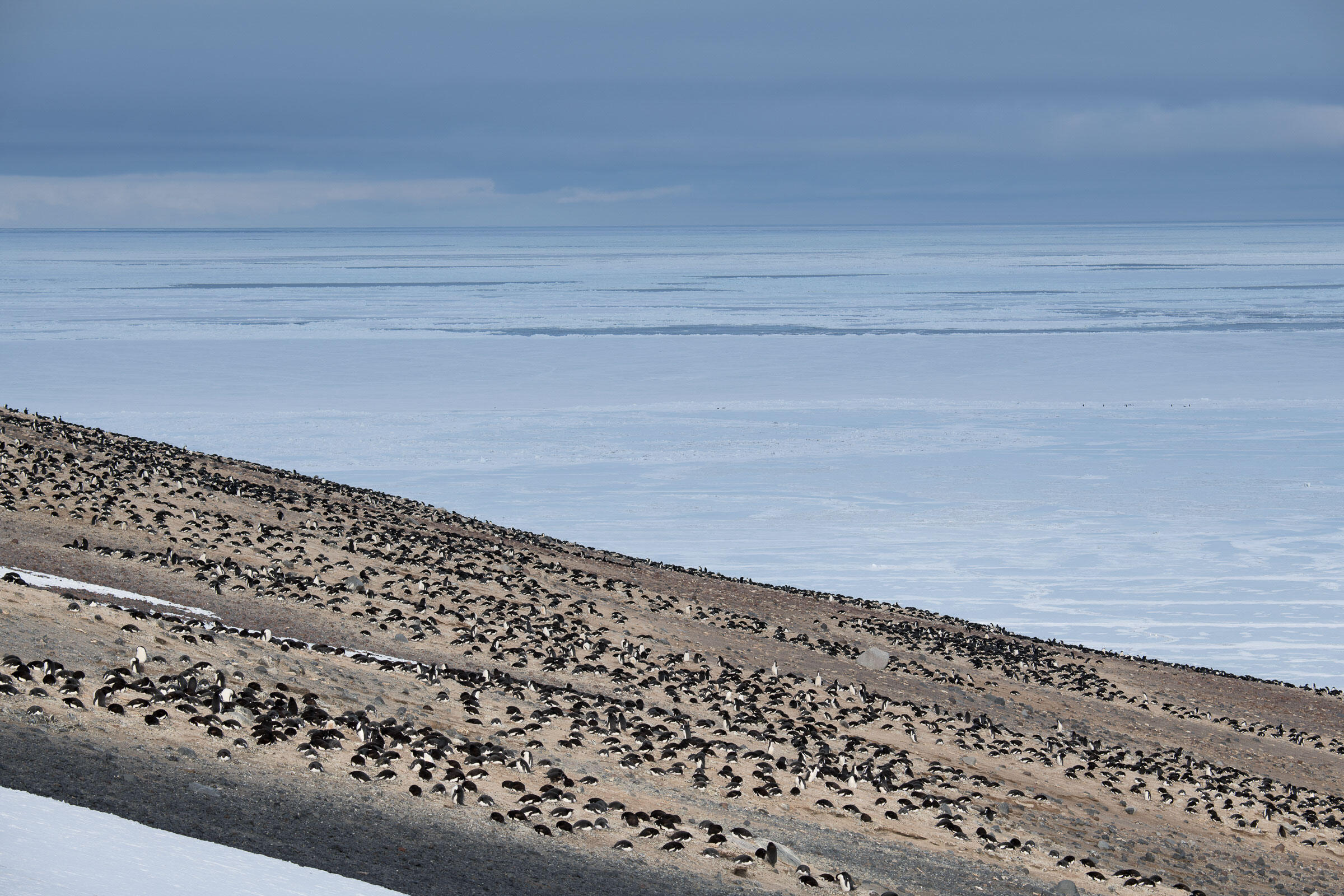 In early December, sea ice stretches to the horizon offshore of Cape Crozier. By the end of the month, at the height of Antarctic summer, incessant winds will have blown the ice far offshore. The persistent open water is the main reason why Adélies nest at Crozier: It gives them consistently easy access to hunting grounds.

The birds presumably need easy access to hunting grounds in winter, too. Ainley’s team is partnering with NASA to combine new tracking intel with the agency’s satellite data to learn how the penguins use the sea ice and where they forage most successfully during winter. That knowledge may help scientists identify important feeding grounds to protect, giving Adélie Penguins their best shot at surviving a warmer future.

A metal wingband is imprinted with a unique identifying number so that researchers can keep track of individual penguins throughout their lifetimes. The researchers typically attach the bands at the end of the season when the chicks are nearly grown, but don't yet have the adult feathers required to go out to sea. It's the perfect time when parents aren't hovering, and researchers also don't have to worry about hurting the chicks. Indeed, the chicks more often hurt the researchers by flipper-bashing them and scratching them with their feet. They attach wingbands to 500 to 1,000 young penguins every year. 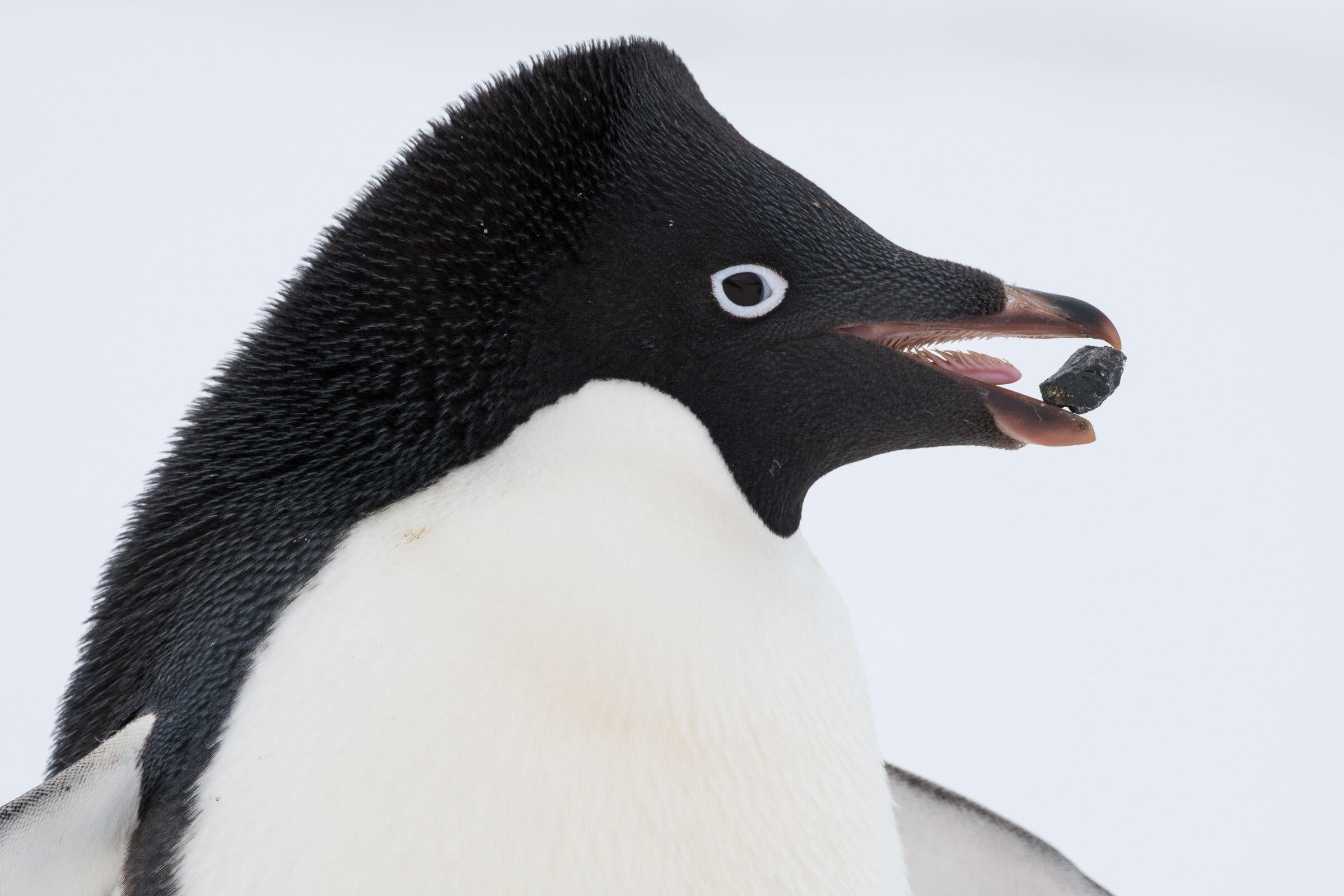 Adélies build their shallow nests from the tiny pebbles left by receding glaciers. The birds are often seen carrying their precious stones for long distances through the colony. 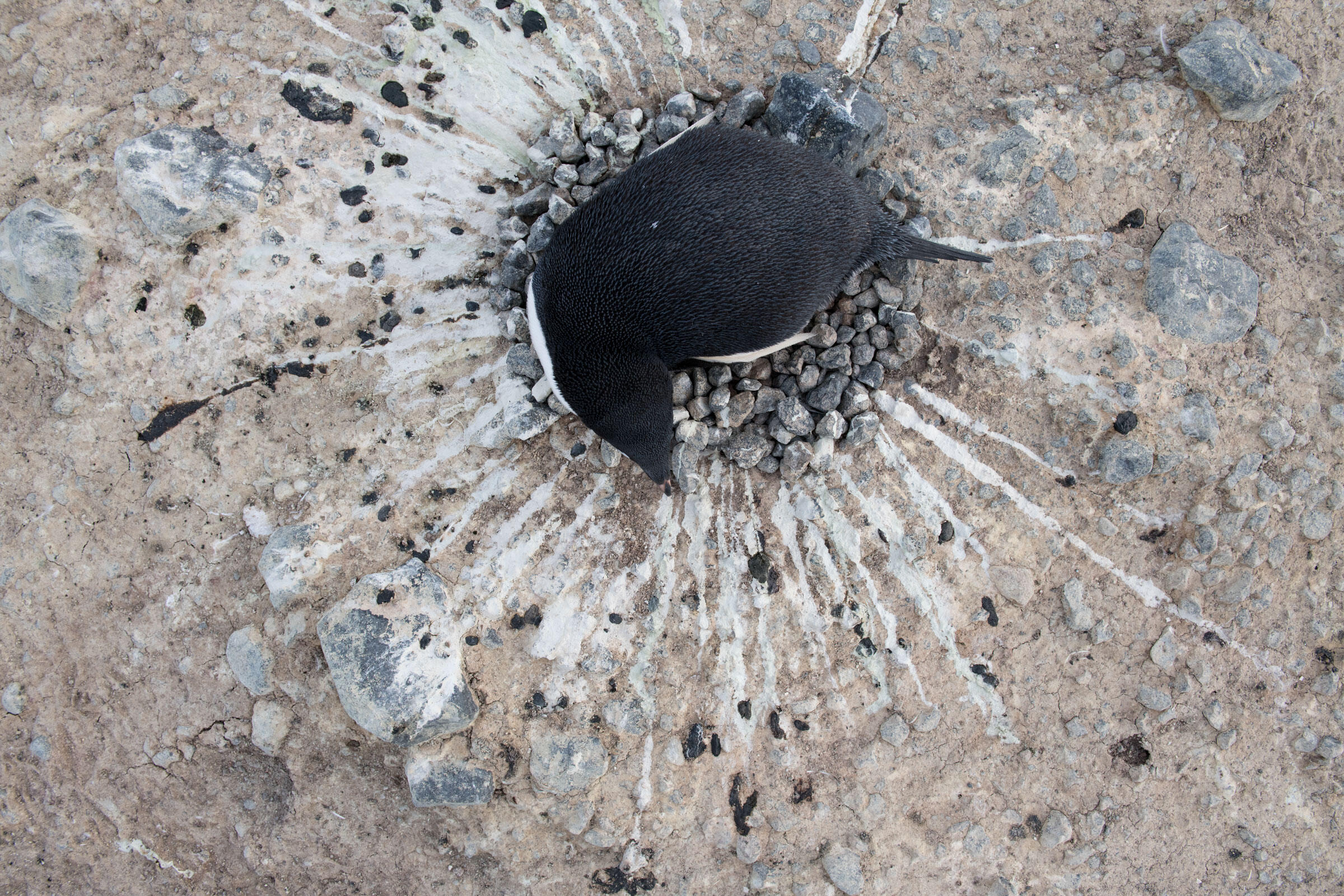 When their offspring are young, the parents take turns at the colony: One adult rests and protects the chick, staying put on a pebble nest framed by a spray of guano, while the other hunts at sea. Once the chicks are grown and austral summer turns to fall, Cape Crozier’s Adélies head to sea. 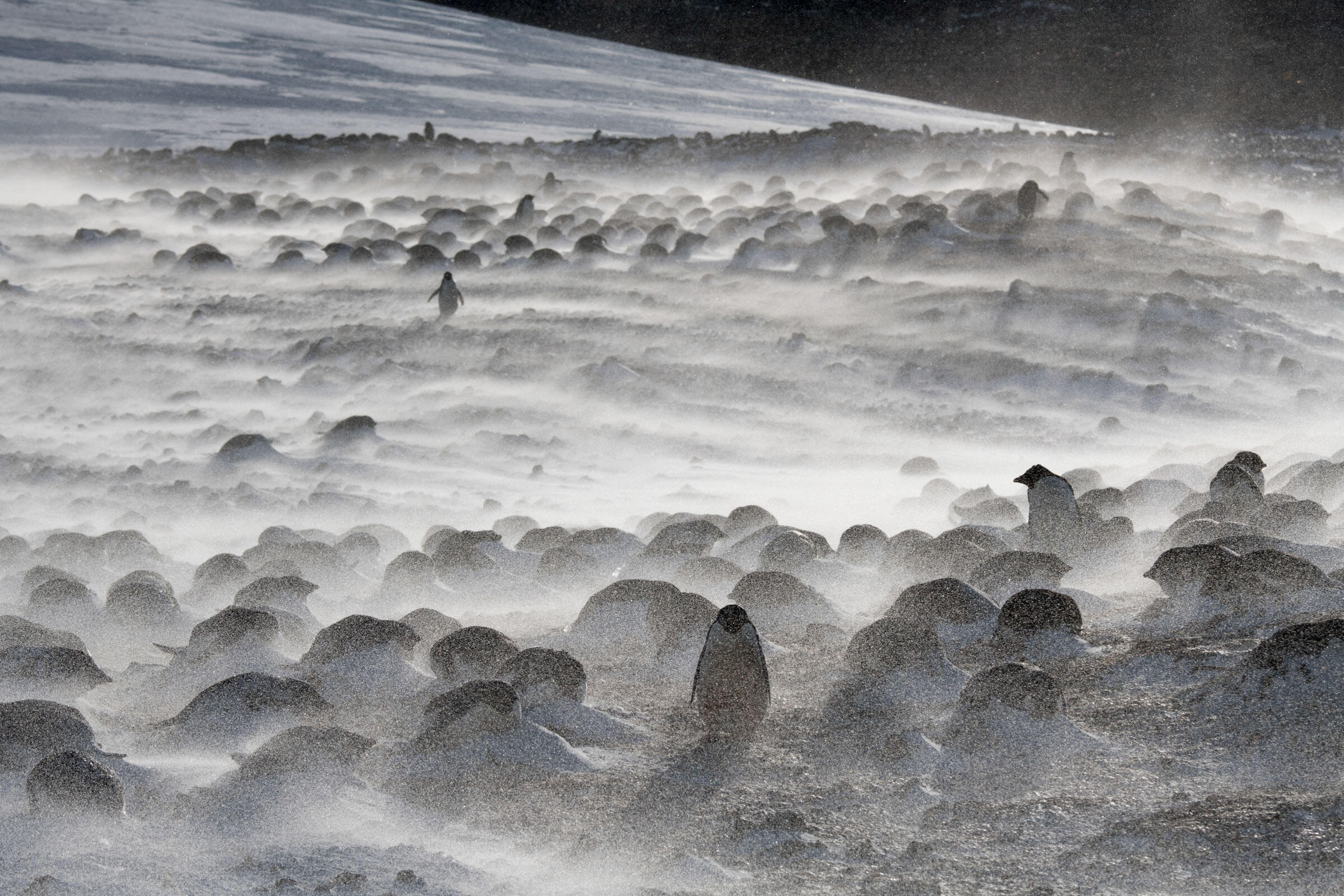 Furious winds blow a mist of snow over Adélie parents hunched over their young. It may look uncomfortable, but those strong winds make Cape Crozier an ideal nesting spot. In addition to blowing ice offshore, wind prevents snow from piling up in drifts and burying nests. 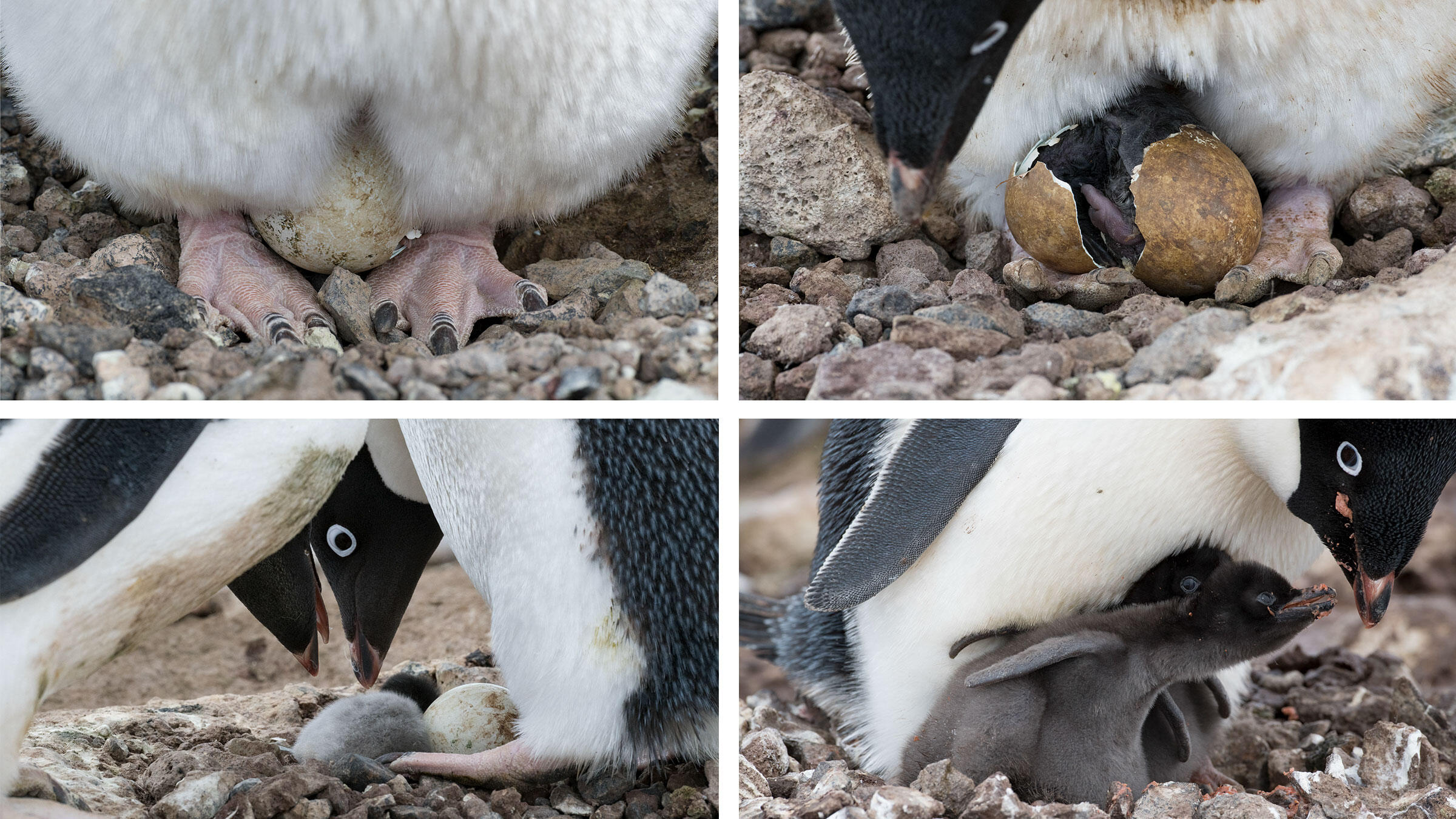 After a month of incubation, the first cracks appear in an Adélie egg—and out comes a brand new chick. (Parents typically lay two eggs per nest). Even when the chicks are very small, Adélie parents greet each other within hearing range. That way, the chicks learn the distinctive call of each parent. This is important later when the chicks live away from the nest in a crèche (think: penguin daycare) and need to find their parents. 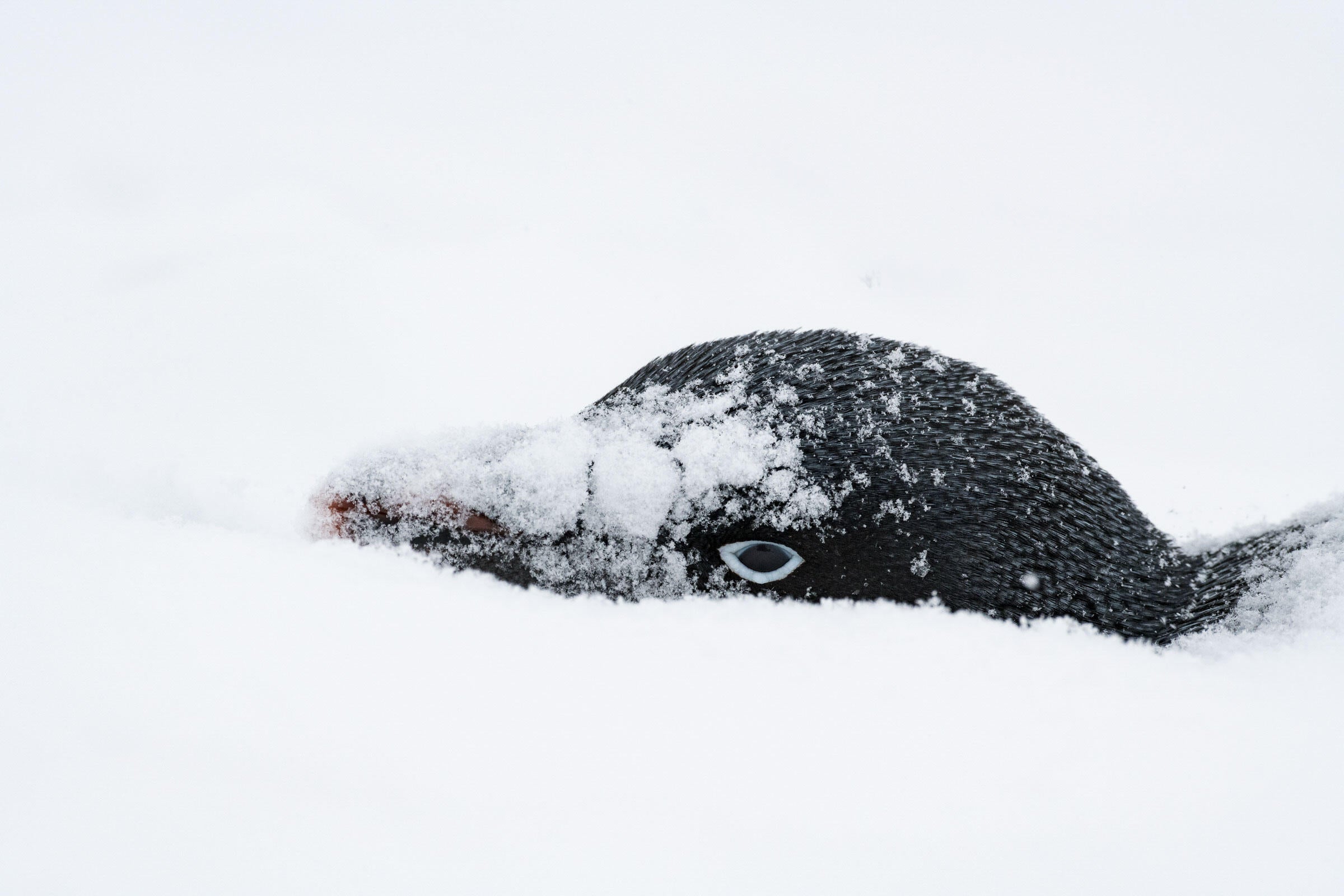 A Cape Crozier blizzard buries an Adélie up to its beak. At a windy location like Cape Crozier, snow rarely accumulates. Hopefully strong winds cleared this snow drift without delay. 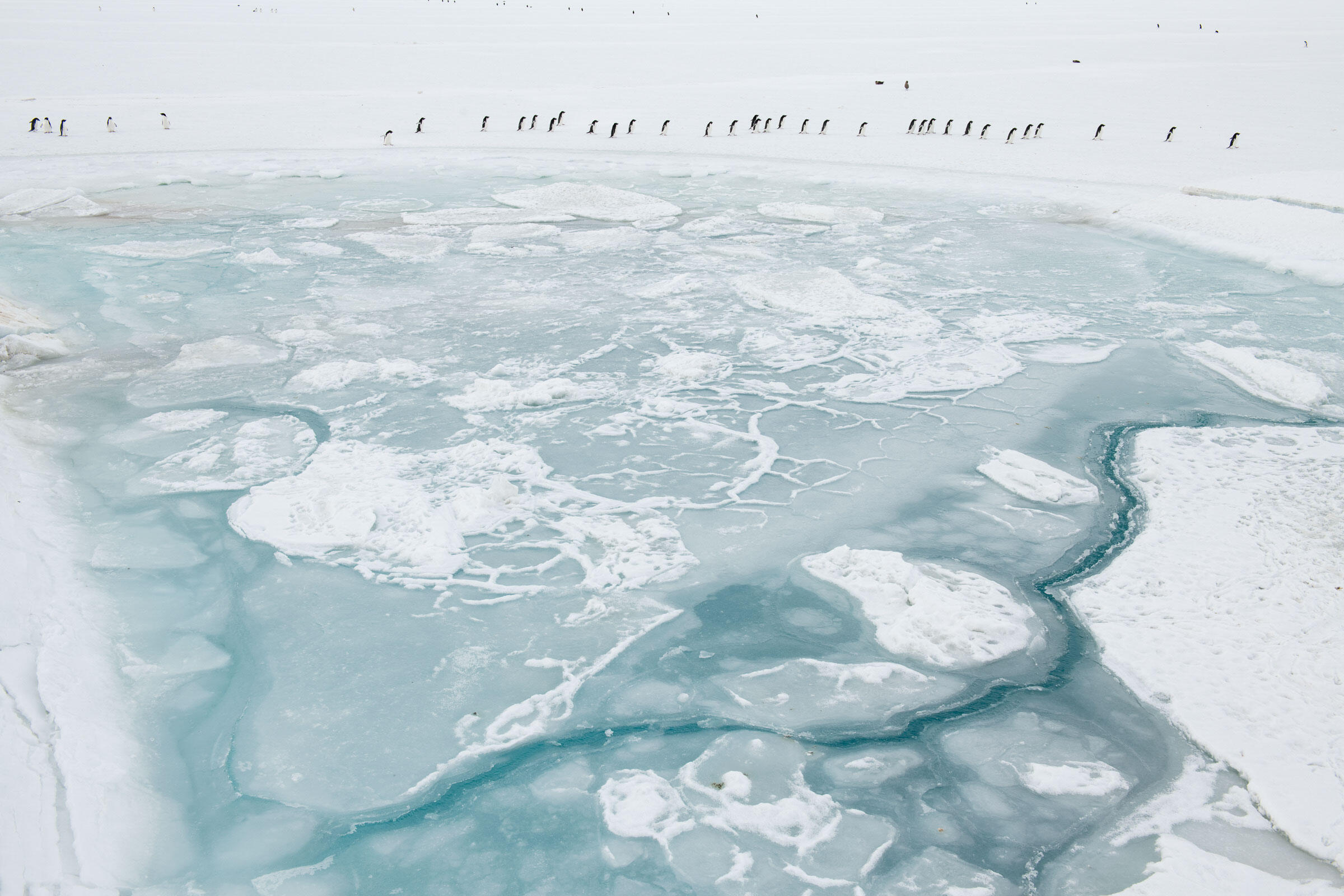 Always wary of predatory leopard seals, Adélie Penguins skirt the edge of a crack in the seasonal fast ice—sea ice that is attached to the shore. When a group of Adélies approaches open water to hunt, they typically crowd near the ice edge, waiting for a brave individual to jump—or be pushed—into the water, where leopard seals may be waiting below. If the pioneer survives, the rest will follow, plunging into the frigid Ross Sea. 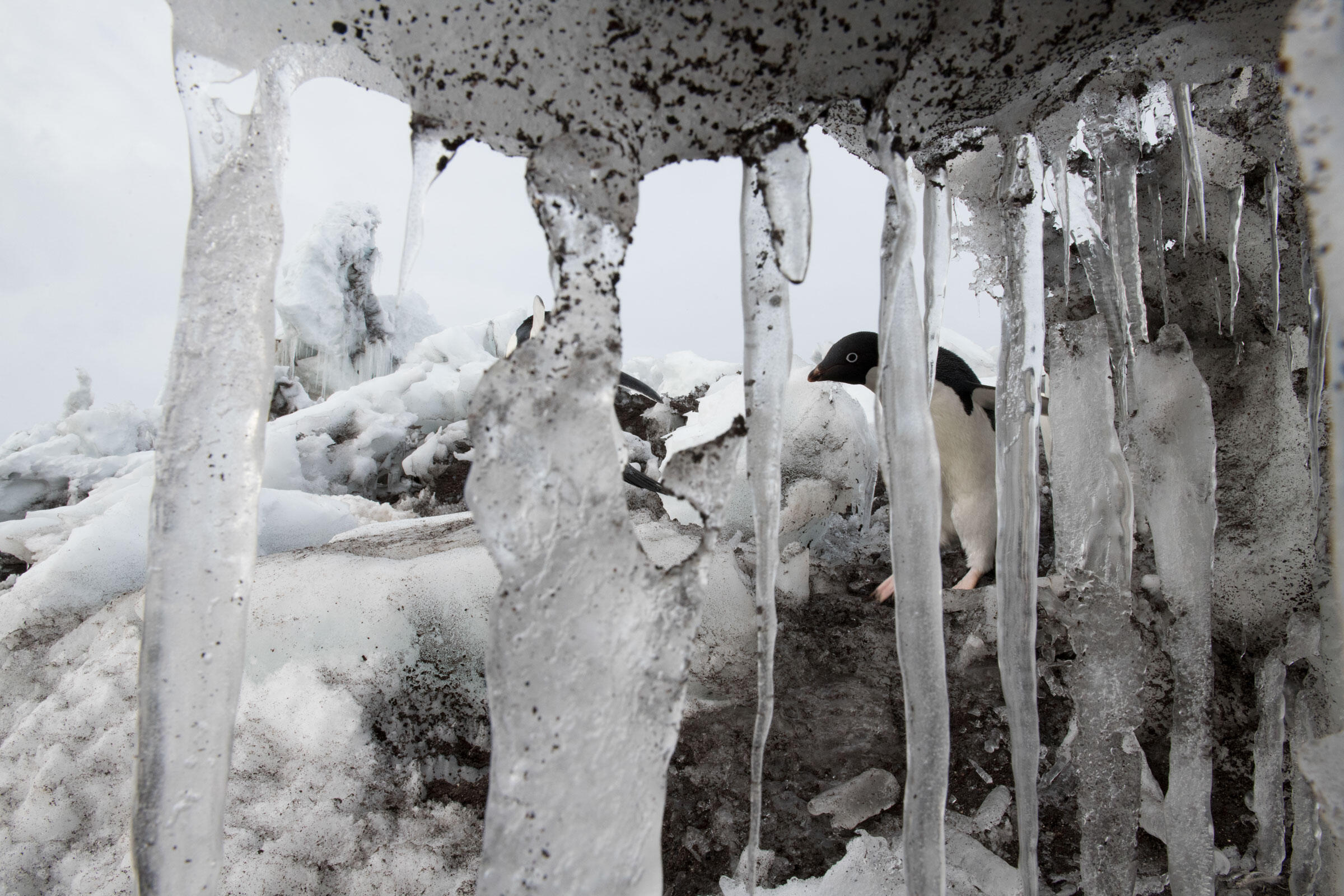 An Adélie penguin navigates a jumble of sea ice blocks to bring food back to hungry chicks. In the summer, when the sun never sets, icicles begin to form on the sea ice ledges and overhangs.

The guano-stained hillsides of Cape Crozier, Antarctica are home to nearly a million Adélie penguins every summer—a figure that has exploded over the past 15 years. Elsewhere in Antarctica, where sea ice is in decline, populations are declining, too. But here, for reasons that aren't clear, sea ice is actually expanding (even as it is less thick). This provides better hunting platforms for the ice-obligate species, and better access to polynyas—areas of open water ideal for penguin foraging.

Sea ice alone can't explain the population boom at Cape Crozier. Ainley also attributes their success to the fishery for Antarctic toothfish that operates in the Ross Sea outside of the MPA. Toothfish and penguins compete for the same prey: Antarctic silverfish. As the fishery removes more toothfish from the system, that leaves more silverfish available for penguin chicks (and adults). Scientists are currently exploring this hypothesis in more detail.

Adélie Penguins migrating north in winter pass through several areas where toothfish and krill fishing is allowed, Ainley says. By tracking them through the winter, and partnering with NASA to use satellite data and pinpoint the penguins' use of sea ice, Ainley hopes to better understand how they use these fishing grounds—information that will help inform how the area is managed in the future. 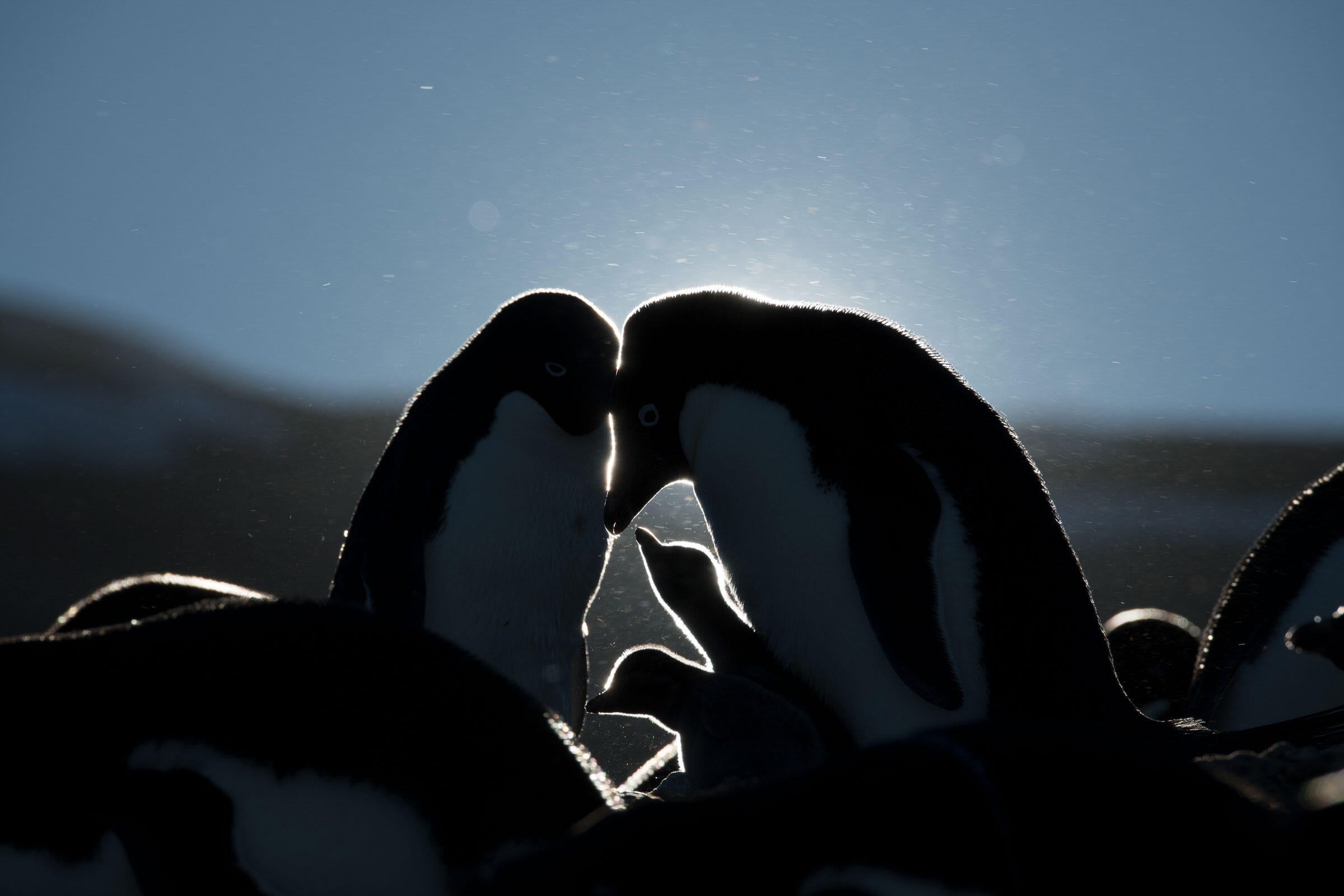