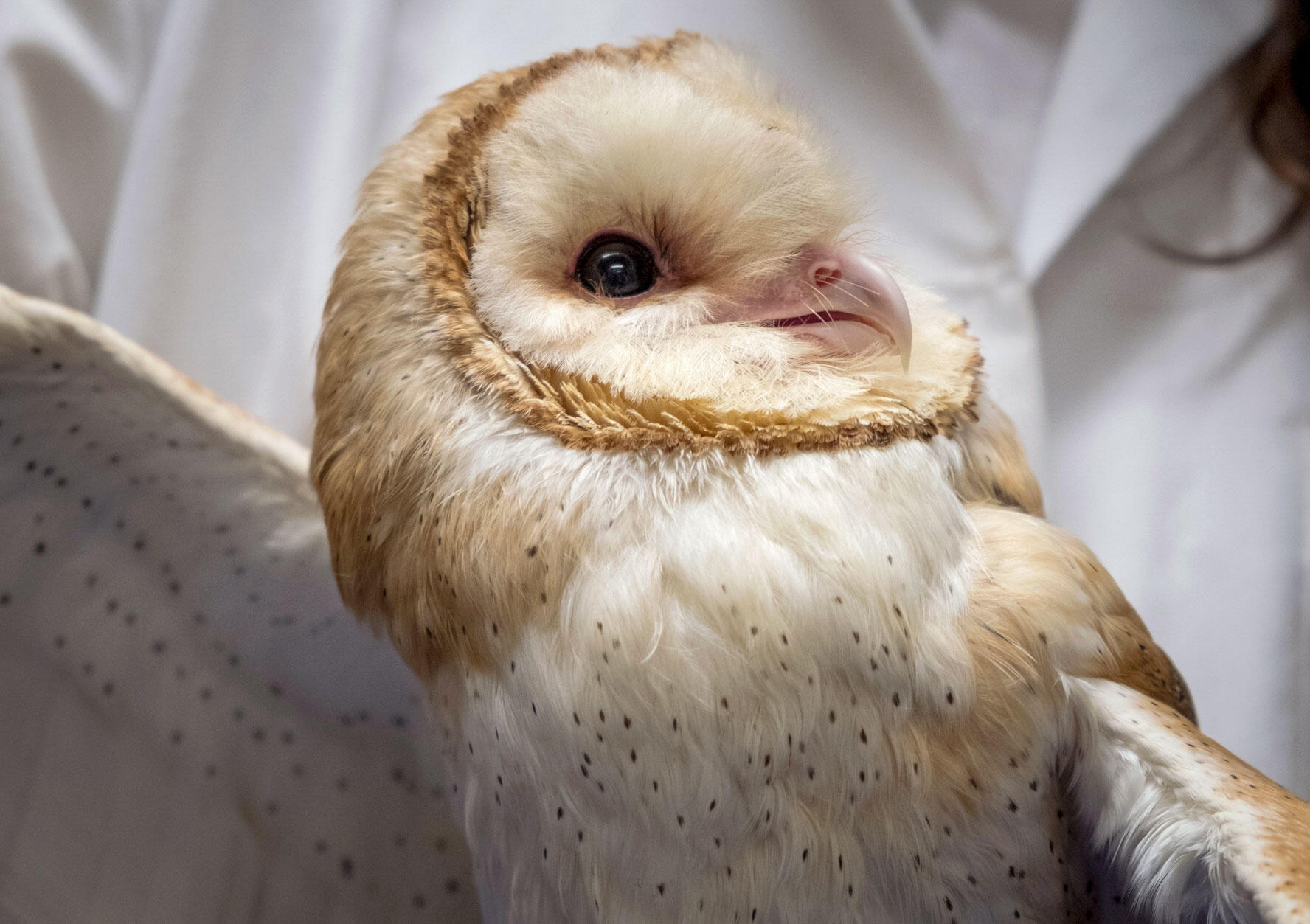 Barn Owls have given us new insights on concentration and midbrain activity. The birds are sourced from a licensed captive-breeding facility and are not subject to invasive experiments. Photo: Meredith Rizzo/NPR

How a Hunting Raptor Could Teach Us to Tune Out Distractions

To treat human disorders like ADHD, neuroscientist Shreesh Mysore has unlocked the key to the Barn Owl’s extraordinary focus.

Editor’s Note: In “Medical Mysteries,” Audubon is featuring scientists who’ve turned to birds to solve age-old health dilemmas and answer questions about our own biology. Read about Rock Pigeons that inspect mammograms and heart scans, Ostriches that lay detoxing antibodies, and below, Barn Owls that cut through the sensory fray.

When Shreesh Mysore started his PhD in 2000, he never imagined he’d learn more from owls than algorithms. At the time the mathematician was looking at decision-making in robots, but he soon became frustrated with abstract systems and decided it’d be better to study the same processes in real brains that had evolved over millions of years.

And so, Mysore landed on the Barn Owl. When the bird hunts in the dead of night, it displays impressive mental and physical discipline. Superb hearing and vision—the species can see up to 100 times better than humans in low light—mean the raptor notices every leaf rustle and shadow crossing its path. But not all of these sensory details signal a tasty rodent within talon’s reach. As its brain homes in on what’s important, a Barn Owl exhibits something countless humans struggle with: intense focus.

For Mysore, now a neuroscientist at Johns Hopkins University in Maryland, the Barn Owl makes a perfect model for investigating how all kinds of animals filter out distractions and target their attention.

“If we’re able to get answers to how Barn Owls might solve this problem,” Mysore says, “then we can start testing how this translates to brain circuits in mammals and humans, including those related to disease.” He hopes his research could one day unlock therapies for attention-deficit hyperactivity disorder (ADHD), which affects upwards of 11 percent of children in the United States, and other cognitive conditions in people.

For decades scientists who study focus have fixated on the forebrain: the neural region in humans and primates that controls higher learning and decision making. But most animals need to distinguish between essential and extraneous information to survive, and this hinted to Mysore that other parts of the brain must be involved. That’s why he’s turned his gaze to the midbrain, an ancient region responsible for analyzing sounds and images. It’s also where birds such as Barn Owls shine, says Eric Knudsen, a Stanford University neuroscientist and one of Mysore’s past collaborators: The avian midbrain is among the most elaborate in vertebrates. Over the past 12 years Mysore’s hatched a series of lab experiments to see whether the Barn Owl’s midbrain really does block out distractions.

Unlike most lab subjects, owls aren’t docile creatures. Mysore learned that the hard way as he met his new counterparts at a licensed captive-breeding facility. “I was very scared,” he says. “I didn’t have any experience working with live animals before. I never even had a pet all my life.” Whenever he went to the owlery, the birds would screech and flap their wings, warning him away.

It took Mysore four months to learn how to hug the owls to his chest to calm them down. Finally, when he and his subjects were comfortable with each other, the tests began. Mysore’s team used a screen and special earphones to present dots and sounds to more than a dozen captive-bred birds. As the moon-faced subjects sized up the stimuli, the scientists monitored their brain activity to see which neurons lit up and which stayed dormant. This revealed how owls specialize in making quick decisions: They have a nerve cluster that seems to select what sensory triggers to react to and pairs with other neurons to maximize processing power.

For instance, a weak light flashing to the left of an owl’s head might trigger a certain group of neurons in the midbrain. But that same cluster of neurons will also respond to a beam coming from the right, Mysore explains, telling the bird to pay attention to the stronger stimuli. This helps the owl brain pare down commands and function more efficiently. “The brain does not simply copy and paste information,” Mysore says. “It actually uses a few neurons to do a big job, constantly picking out the location that is the most important for the owl.”

In the real world, the Barn Owl’s intricate network of receptors helps it to assess the direction and distance of its prey, allowing the bird to make mid-flight corrections as it advances on a moving target. Mysore hasn’t been lucky enough to see the ability in action just yet, but he’s hoping to run into a few hunting owls in his backyard soon.

Armed with his new avian knowledge, Mysore is now looking at the same midbrain neurons in mammals to test how attention can go awry. “One of the things we’d love to do is take the hypothesis we’ve generated and collaborate with folks who study attention in humans to understand what happens in actual patients,” he says. This, he adds, is the first step to developing new genetic or pharmaceutical therapies for ADHD, Parkinson’s disease, and similar syndromes. What started with a hunch about a bird’s mental acuity could someday lead us to better mind control.

Correction: An earlier online-only version of this article incorrectly described Mysore’s tests as non-invasive, whereas a surgical procedure is required. The lab reports that all procedures for animal care and use were approved by Johns Hopkins and in accordance with NIH guidelines.

How the Biggest Birds on Earth Could Help Fend Off Epidemics

Veterinarian Yasuhiro Tuskamoto has a flock of 500 Ostriches—and, in their huge eggs, a way to fight infectious diseases.

How Do Barn Owls Fly So Silently?

The secret to an owl’s stealthy flight lies in the shape of its feathers.