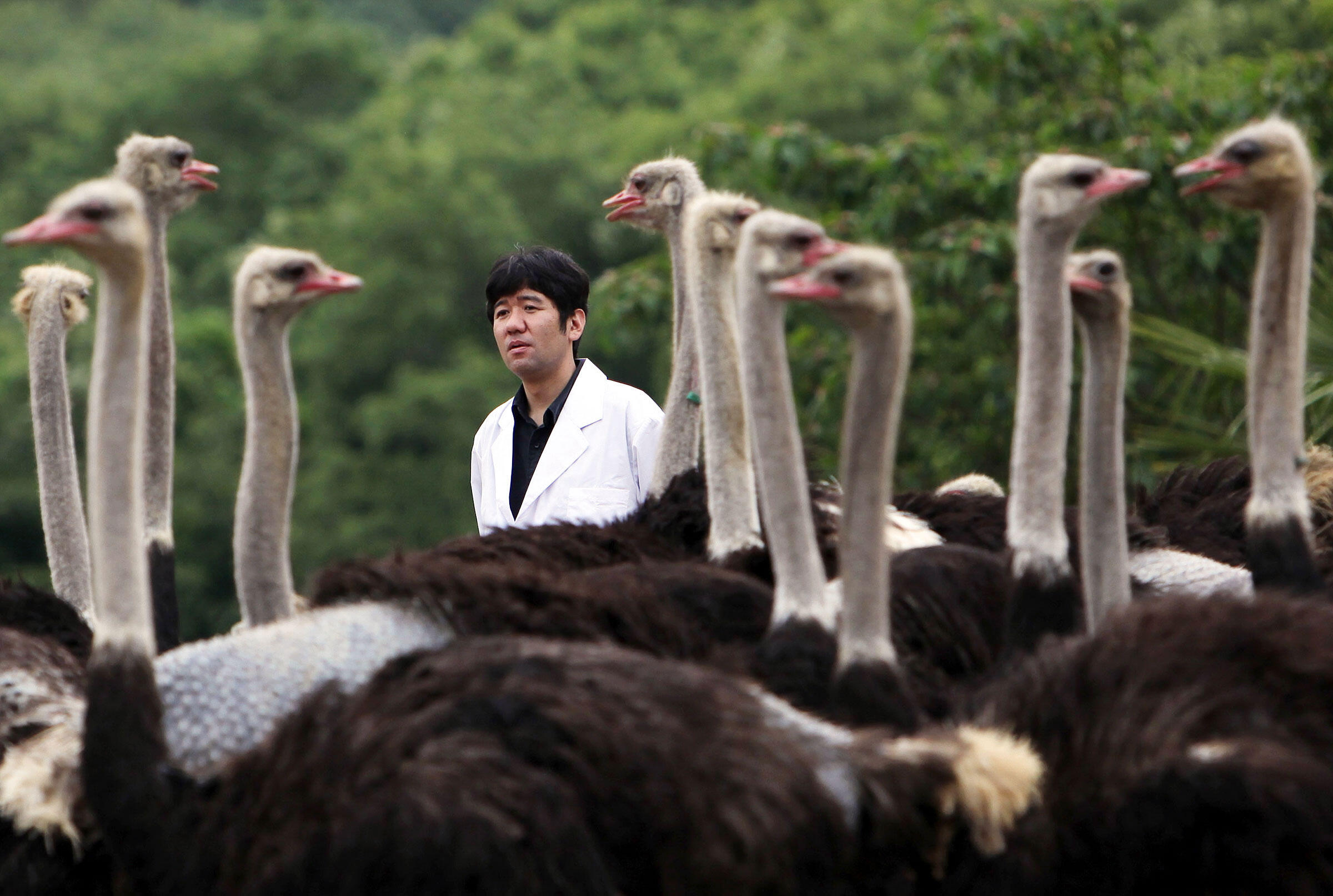 How the Biggest Birds on Earth Could Help Fend Off Epidemics

Veterinarian Yasuhiro Tuskamoto has a flock of 500 Ostriches—and, in their huge eggs, a way to fight infectious diseases.

Editor’s Note: In “Medical Mysteries,” Audubon is featuring scientists who’ve turned to birds to solve age-old health dilemmas and answer questions about our own biology. Read about Barn Owls that cut through the sensory fray, Rock Pigeons that inspect mammograms and heart scans, and below, Ostriches that lay detoxing antibodies.

Since he was a child, Yasuhiro Tsukamoto had wanted to do research on dinosaurs and birds. Ostriches, he determined, were the best middle ground. “They have fingers and nails on the inside of their feathers, which makes them very primitive and near dinosaurs,” Tsukamoto writes.

Now, as a dean in veterinary science at Japan’s Kyoto Prefecture University, he gets to work with the giant dino-birds every day while harnessing their heavyweight properties to fight human afflictions.

Tsukamoto keeps a flock of 500 captive-bred Ostriches at four sprawling ranches in central Japan. He was originally tasked to study them for a project in which the birds were fed surplus soy beans, which they would then poop into fertilizer for local farms. But that all changed in the early 1990s when he noticed his charges were surprisingly disease-free compared to other captive species. This high level of immunity, he and his colleagues soon gathered, could be traced back to the hefty five-pound eggs the birds made.

In the last stages of pregnancy, mothers throughout the animal kingdom boost their young’s defenses by passing on antibodies—blood-based proteins that neutralize bacteria and viruses. Mammals do that through their placentas and breast milk. Birds do it through the yolk in their eggs.

Tsukatomo had an idea: What if he could cus­tomize the antibodies in an unfertilized Ostrich egg and extract them to make various medicines for humans? That question led to his research over the next decade. Like before, the Ostriches could roam freely in the mountain valleys and eat bean sprouts, alfalfa, and a specially-developed mixed feed. But this time, they’d produce excrement and eggs. Thousands and thousands of eggs.

As the female Ostriches cranked out the goods (each one can produce 50 to 100 a year, over a 50-year lifespan), Tsukamoto’s team experimented with how to harness the birds’ detoxing power. First, they’d inject egg-laying hens with inactive viruses, allergens, and bacteria. The shots wouldn’t make the birds sick, but would kick their immune systems into overdrive, causing them to turn out extra antibodies that target each threat.

The process isn’t entirely novel. Typically, to make vaccines, antibody ingredients are sourced from duplicated mammalian cells—such as mice, rats, and goats—or, sometimes, from chicken eggs. But Ostrich eggs come with a few bonuses. First, there’s the rapid pace at which the antibodies form in the egg yolks—about six weeks after the hen is injected with a pathogen or vaccine. Second, they can be collected without harming the parent or young. Finally, there’s cost: “Antibodies from other animals are very expensive [to grow] and prone to degeneration,” Tsukamoto says. Ostriches’, on the other hand, are extra resilient. The proteins can withstand temperatures up to 250 degrees Fahrenheit and highly acidic conditions. That means scientists could even add them to products like candy or cough drops, which require extreme cooking temperatures that would break down most antibodies.

Scientists hope to use the Ostrich eggs to rapidly develop treatments for mutating viruses and bacteria, like in the case of cholera. “We think about this as an inexpensive prophylactic that makes sure you don’t contract the disease at all,” says Stu Greenberg, CEO of OstriGen, a biotech startup in Massachusetts working to commercialize Tsukamoto’s research into ointments, pills, weight-loss supplements, and boosters. “Vaccination is obviously the best protection,” he explains, “but if a new form of a virus comes out, it takes a long time to develop a response."

Most recently, Tsukamoto’s group announced in a press release that they’ve distilled antibodies that can neutralize all four strains of the dengue virus in the lab (the work has not yet been published or peer-reviewed). Dengue, a mosquito-borne disease common in tropical and subtropical climates, infects about 390 million people around the world each year. There is already a vaccine for the infection, but it’s far from perfect, says Ashley St. John, an immune pathologist at Duke-NUS Medical School. “The current vaccine is supposed to be used to prevent secondary dengue in people who have already had the virus,” she adds. “There’s still a need to develop other therapeutics and vaccines that could serve more of the population.”

St. John, who isn’t involved in the Ostrich experiments, is intrigued by the antibody research coming out of Tsukamoto’s lab. “The idea of using Ostrich antibodies for therapeutics in general is a very interesting concept, particularly because of the advantages of producing the antibodies from eggs,” she says in an email.

Tsukamoto’s team plans to further develop their dengue therapy and ultimately, put it up for sale. But first they’ll have to contend with several regulatory challenges. Currently, Tsukamoto has U.S. patents for his antibody manufacturing process. The research, though, is still in the preclinical phase, which means it hasn't yet been tested for safety or efficacy in humans and hasn’t been approved by the U.S. Food and Drug Administration. It could be years before that happens, if at all.

Even if Ostrich egg-derived shots are a ways off, Tsukamoto’s lab has shown progress on the innovation front. He’s recently started testing the antibodies as a topical treatment for people with hair loss and acne and as an oral medication for cholera. They’re also being used as additives in skin-care products and even air filters. (During the bird flu scare in Japan and China in 2008, the Ostrich team developed and sold masks embedded with antibodies.)

The dengue treatment, however, would be far trickier to roll out. Once the team perfects the quality of antibodies, they’ll have to take the fight to the bloodstream, where the virus originates. That, St. John explains, will require more rounds of testing to ensure that the disease-fighting proteins are just as effective in IVs and injections.

While he waits for his research to become reality, Tsukamoto continues to tend to his flock in hopes of unlocking more of their powerful qualities. Even after a recent mishap with an irked subject, his dedication to the birds hasn’t faltered. “I was kicked by a huge male Ostrich and broke my right knee,” he writes. “I spent two months in the hospital, but my love for the Ostrich never changed.”

Correction: The article was updated to reflect that cholera is a bacteria-based infection rather than a virus.