Behind the Scenes at Connecticut’s Biggest Baby Bird Nursery

That’s the life of a baby bird. It’s a simple routine, but one that keeps the volunteers at the makeshift wildlife hospital at Sharon Audubon, in northwest Connecticut, on their toes. From sunrise to sundown, they cycle through hundreds of begging mouths, delivering freshly prepared meals such as dog-food-and-mealworm mush, hacked-up fruit salad, and whole, thawed-out mice. Between feedings they squeeze in other chores: mopping up excrement, wiping down cages, and running endless loads of laundry. It’s a hugely messy, largely thankless job, but the 26 dedicated volunteers are hooked. “This is my happy place,” says Vicki Lynch, a dental hygienist who’s been moonlighting as a mama bird for half a decade.

Now in its 40th year, the hectic baby unit is part of Sharon Audubon’s wildly successful rehabilitation program. The 1,000-acre center, founded in 1961, is one of the only facilities in the Housatonic Valley that specializes in avian care. To keep up with its ever-expanding roster of patients, the staff installed two new outdoor flight cages last year, with help from the Wiederhold Foundation. “We had lots of patching up to do,” says center director Sean Grace. “Everyone in the community—human and beyond—uses us as a resource. There’s a lot riding on us.”

An average 350 birds come in for rehab each year, though 2016 has been especially busy, with 280 patients so far. Most of the youngsters are brought in during the spring and summer by locals who pick up “abandoned” infants from the ground. Some of these birds are truly orphans, while others are simply testing their wings outside of the nest. Songbirds and raptors make up 80 percent of the clientele—and they’re not all helpless newborns. A smattering of adults always turns up, sporting injuries from clashes with windows, cars, and even pets. With all of the birds, once they’re healthy enough, they’re released; if they can’t survive in the wild, they become permanent residents that join the center’s ranks of education birds, which include Eastern Screech-Owls, a Broad-winged Hawk, a Turkey Vulture, and a Peregrine Falcon.

While the vast majority of the animals the center treats are birds, it has an open-door policy for all creatures—rabbits, turtles, and even insects are welcome. It’s thanks to the volunteers that the program is “flourishing,” says Sunny Bettley, Sharon Audubon’s wildlife rehab and outreach specialist. Bettley took over the facilities last year after working at the largest rehabilitation facility in Indiana. Grace describes her as a know-everything, can-do-anything type of leader. She has her personal remedies—tiny foot boots cut out of yogurt containers, honey to sterilize and clot open wounds—which she readily shares with her helpers, such as Nicole Castaneda, a recent college graduate from Virginia.

Castaneda puts in 8- to 12-hour shifts multiple days a week. The commute is easy—she’s living on the second floor of the center for the summer—and there’s not much else to do in town, she says. Picking up uneaten mouse tails is a small price to pay for the ultimate reward: freeing the youngsters she's cared for. “Once they’re like, ‘I don’t need you anymore,’ ” Castaneda says, “that’s really what we’re going for.” For the volunteers, it’s bittersweet. But there’s no time to dwell on the parting; there’s always a new baby that needs looking after. 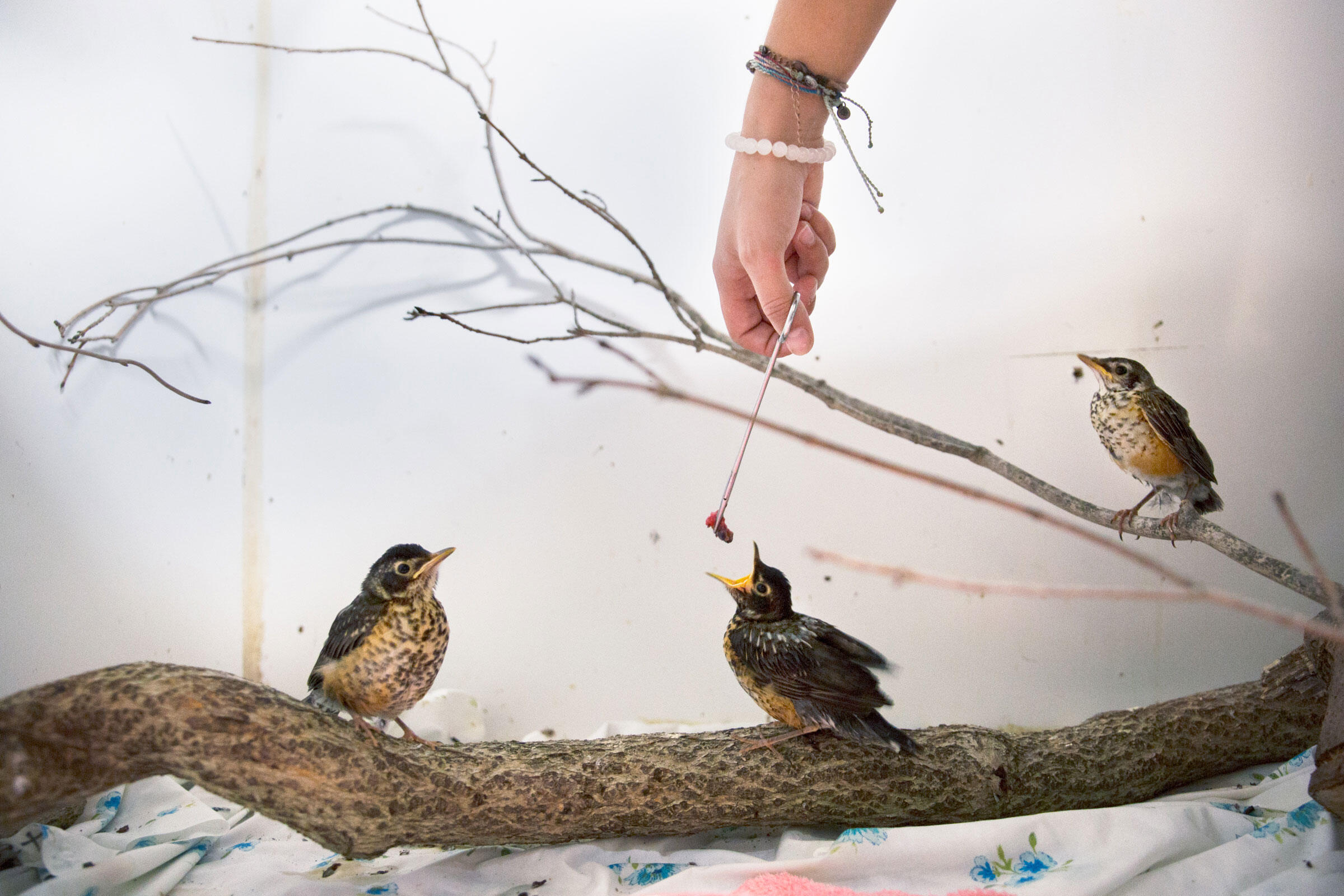 These fledgling robins were fed just a few minutes ago, and they’re already squawking for their next helping. Castaneda is at the ready with a healthy mix of apples and berries. “I think they get better meals than I do,” she says. 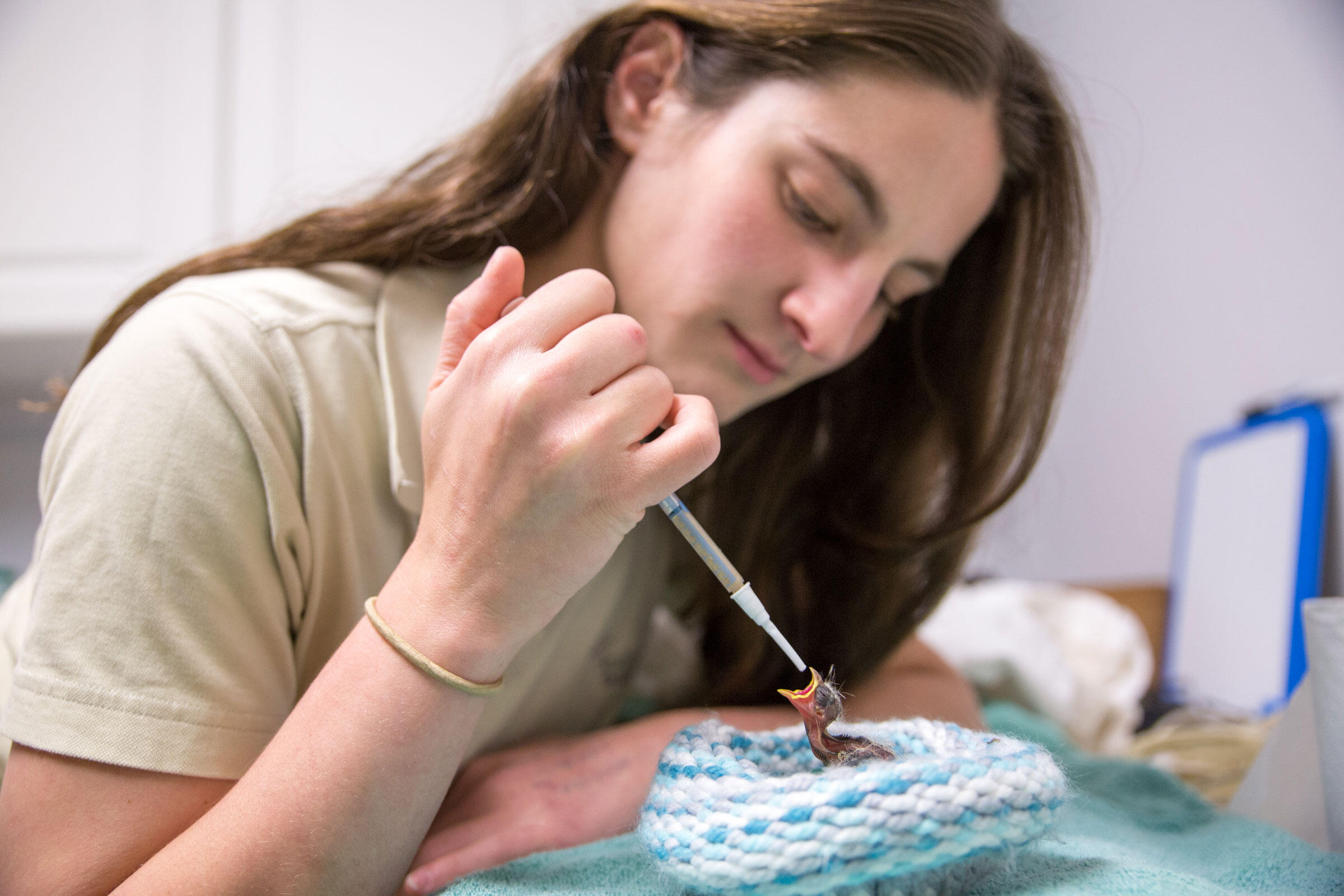 This days-old nestling is so delicate that food is visible as it slides down its translucent throat. All it needs is a few drops of formula, but its appetite is constant. While it’s too young to tell the species just yet, Bettley says it could be a Tufted Titmouse. 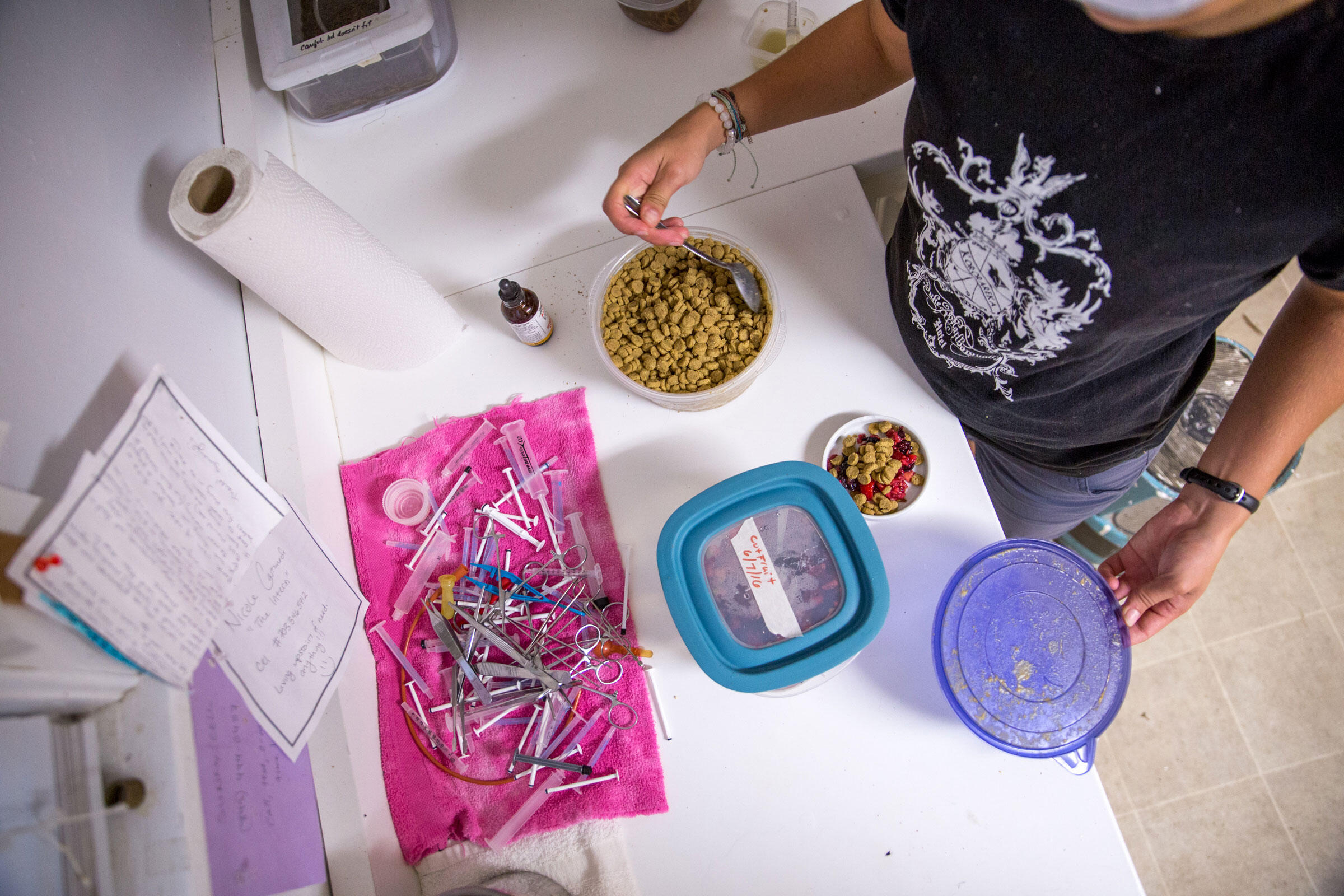 Menus are customized for different species and age groups. For newborns and nestlings, it’s a microwaved stew of soaked dog food, vitamins, live mealworms, and (human) baby food. Fledgling songbirds get trail mix: seeds stirred in with bits of fruit. 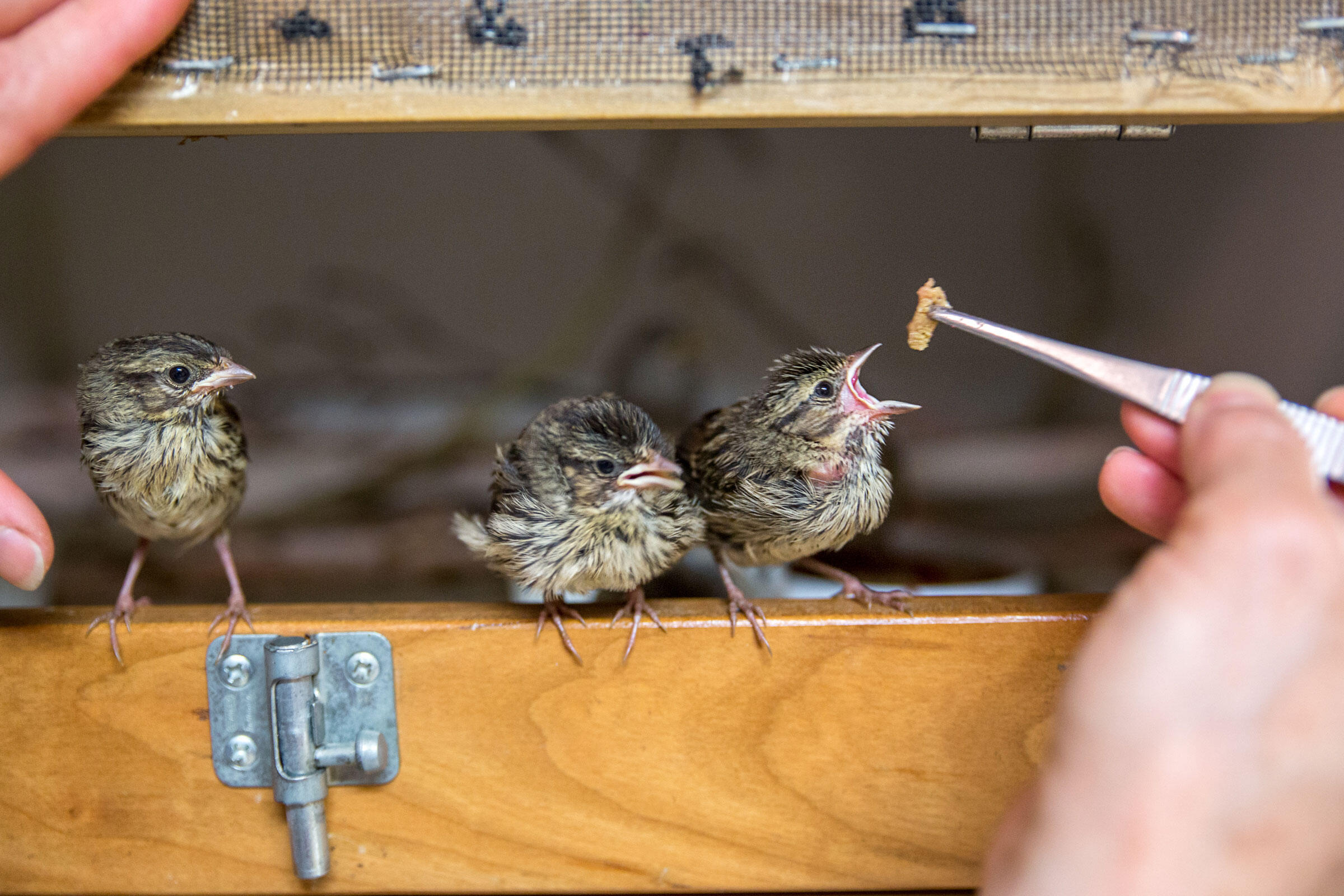 Fledgling Chipping Sparrows eagerly await mealworms. Young sparrows have a tendency to keep eating—to the point of death, if unchecked—so the volunteers manage their portions carefully. 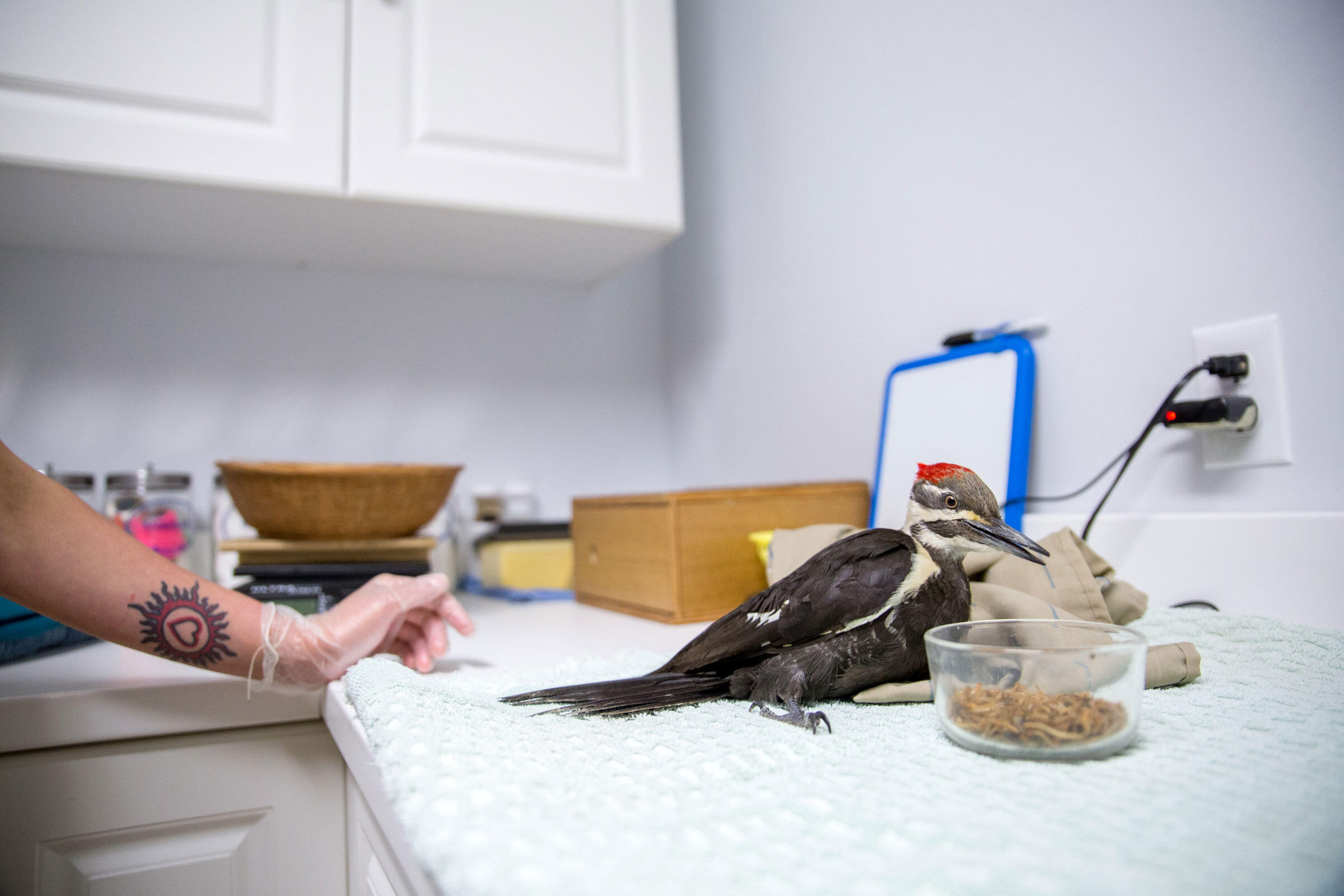 A young Pileated Woodpecker is about to devour a fresh bowl of mealworms, which arrive in wriggling masses via snail mail. It costs tens of thousands of dollars a year to feed the patients, including $39,000 on mice alone, though much of those costs are offset by donations and grants. 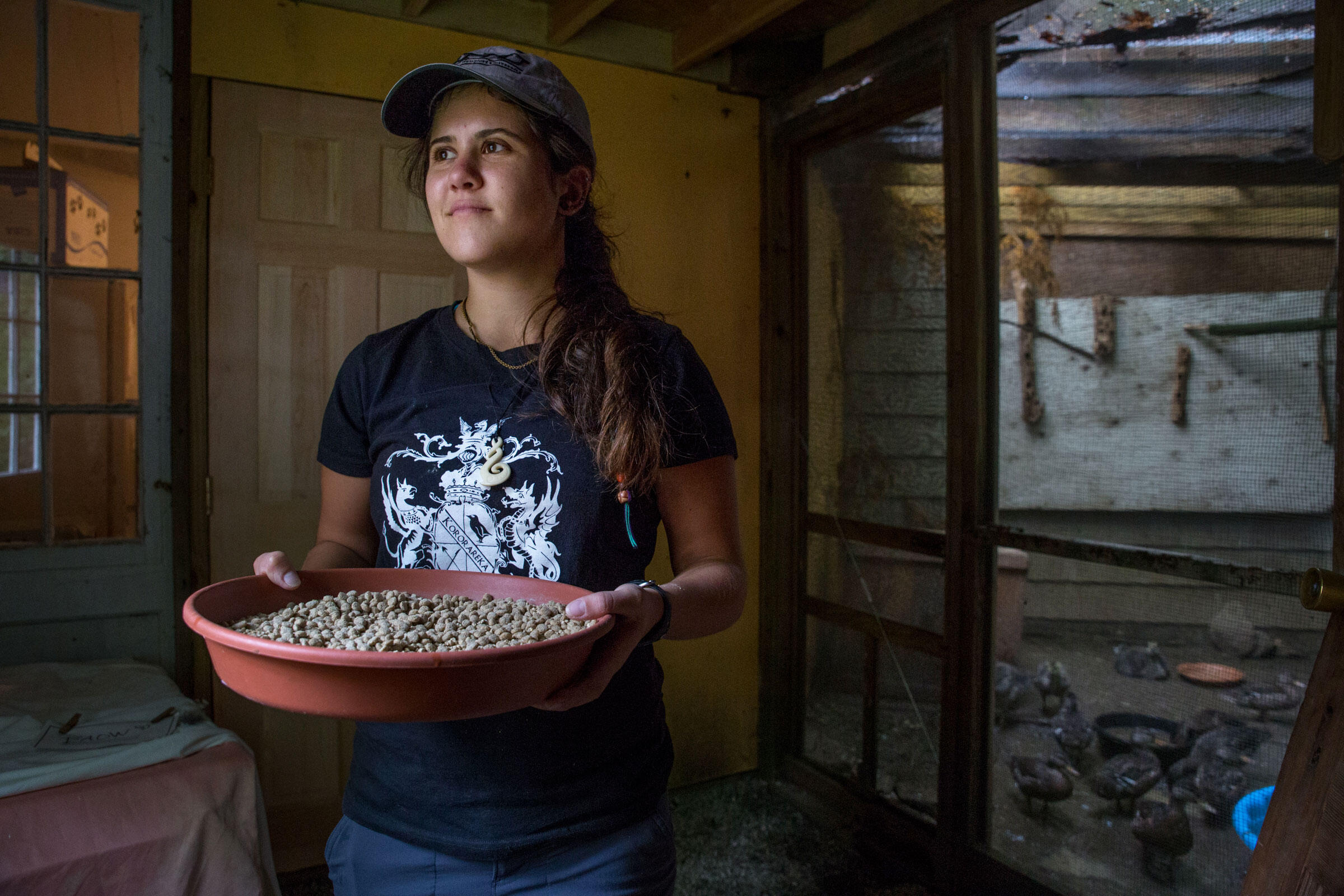 While Castaneda never stays in one place for long, this is her second straight summer in Sharon. Her shifts are mostly taken up by feeding, cleaning, and doing laundry, but she also shadows Bettley to learn the more delicate medical procedures. Here she is with the center's Mallards—a mud-loving bunch that's always in need of a fresh pool of water. 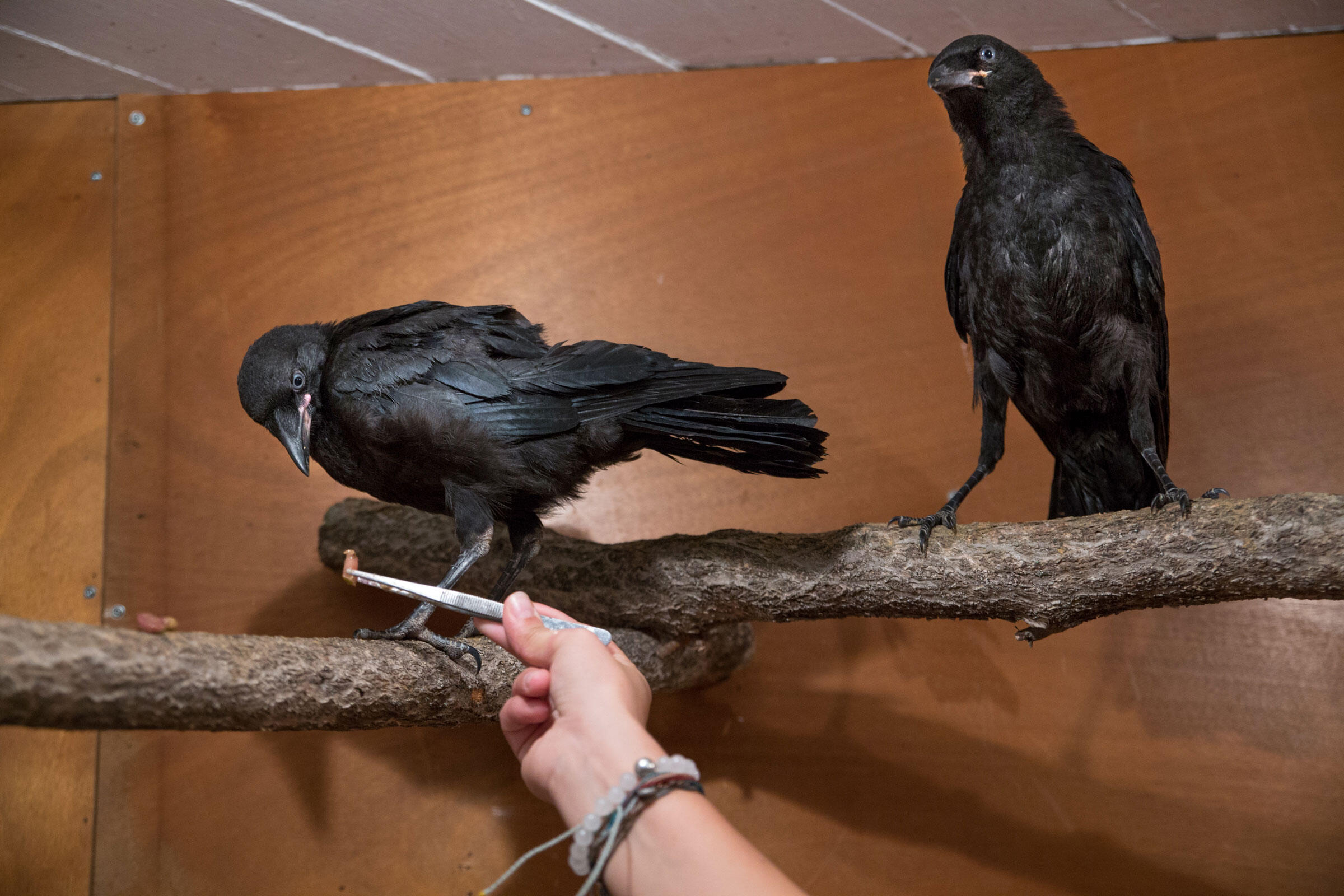 These American Crows have graduated to the next level of hospital care, which prepares them to be self-sufficient in the wild. They have their own flight cage, and are being schooled to pick up mouse entrails off of branches and the ground. 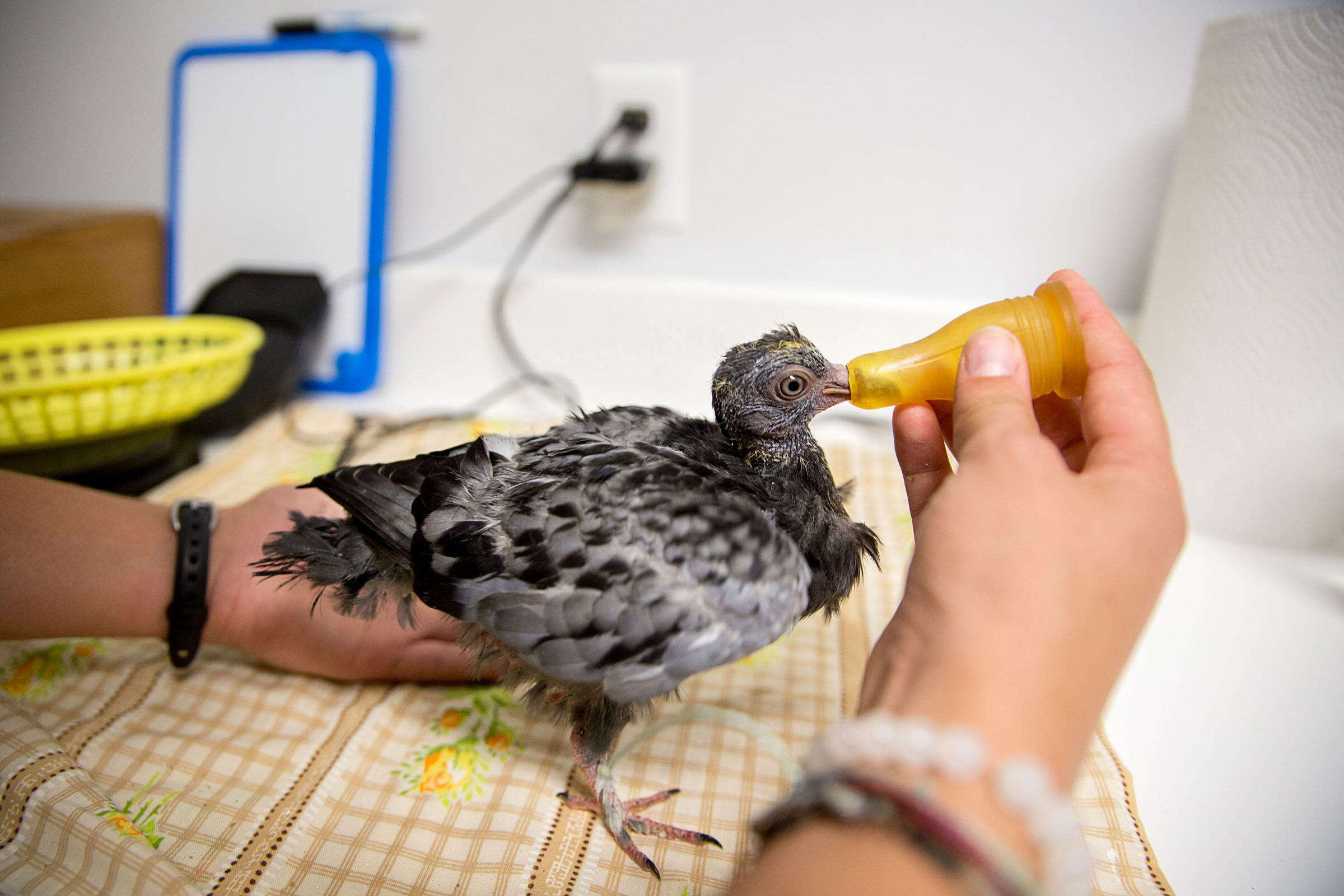 A baby Rock Pigeon feasts on protein-rich mush delivered in a nipple. The center’s staff and volunteers are constantly adapting their methods of care to suit each individual’s needs. In this case the nipple works best because it fits the bird’s beak and doesn’t inflict any cuts, as plastic might, Castaneda says. 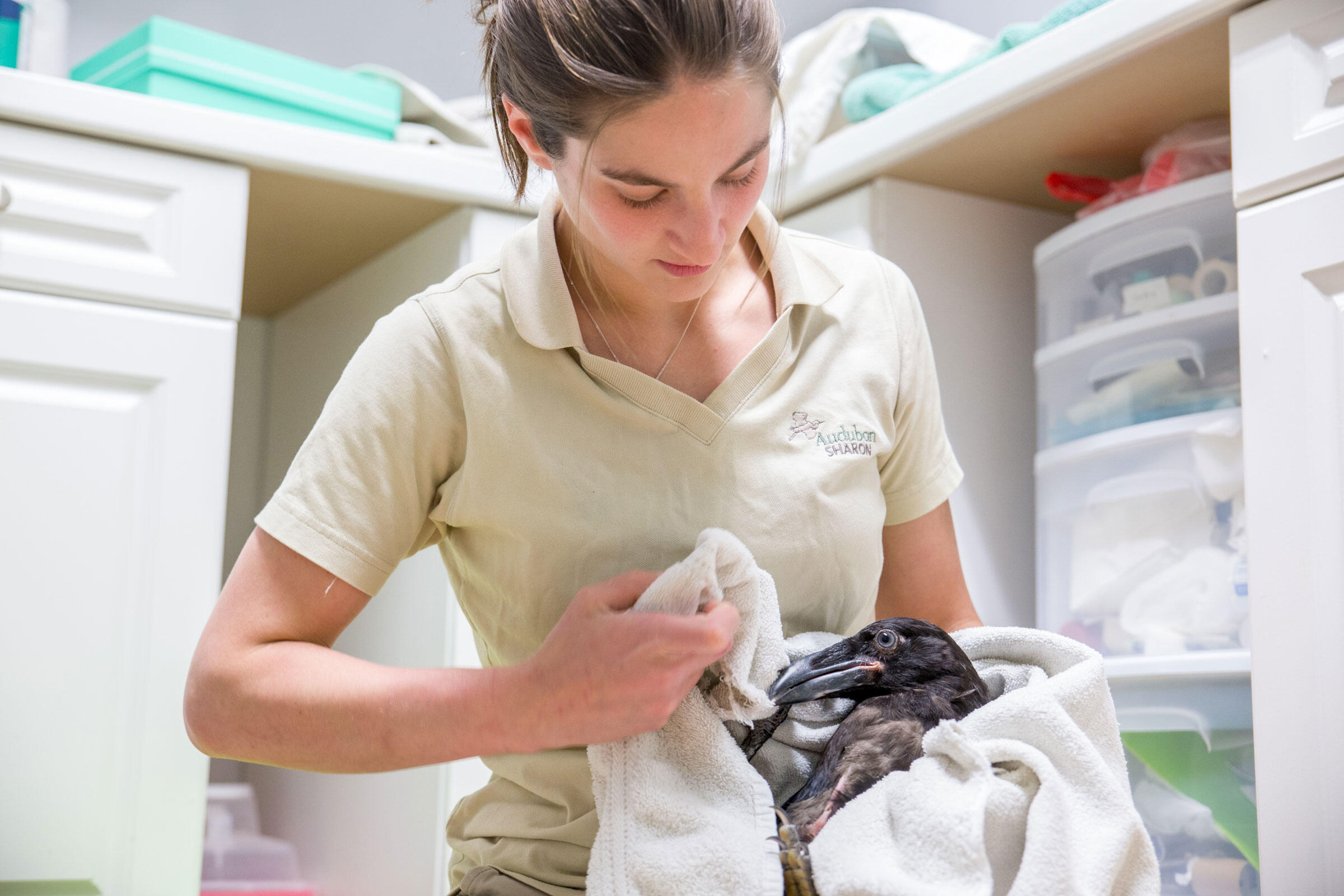 Bettley gives a newly admitted juvenile Common Raven a physical exam. The bird was found next to a deer carcass and a dead adult (possibly its parent). Based on the calluses on its keel and its frayed tail feathers, Bettley surmised that it had been dragging itself on the ground—unusual behavior for a young raven. Her prescription: a quick test for respiratory parasites and plenty of nourishment.

Learn more about how to support and volunteer with the baby unit on the Sharon Audubon website.