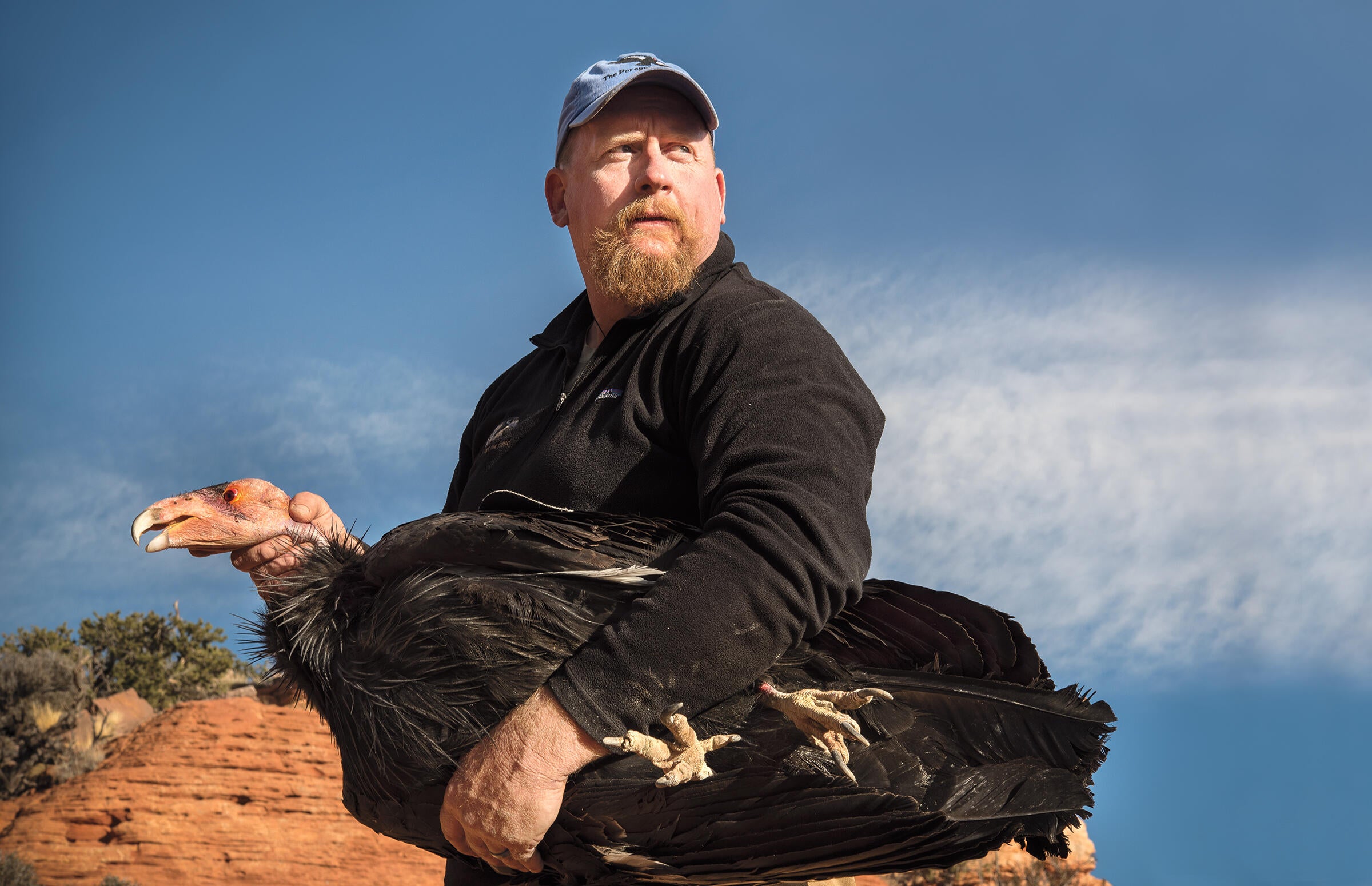 Chris Parish treated this female for lead poisoning last year, returning her to wild the after a couple of weeks, when she was healthy. Photo: Dawn Kish 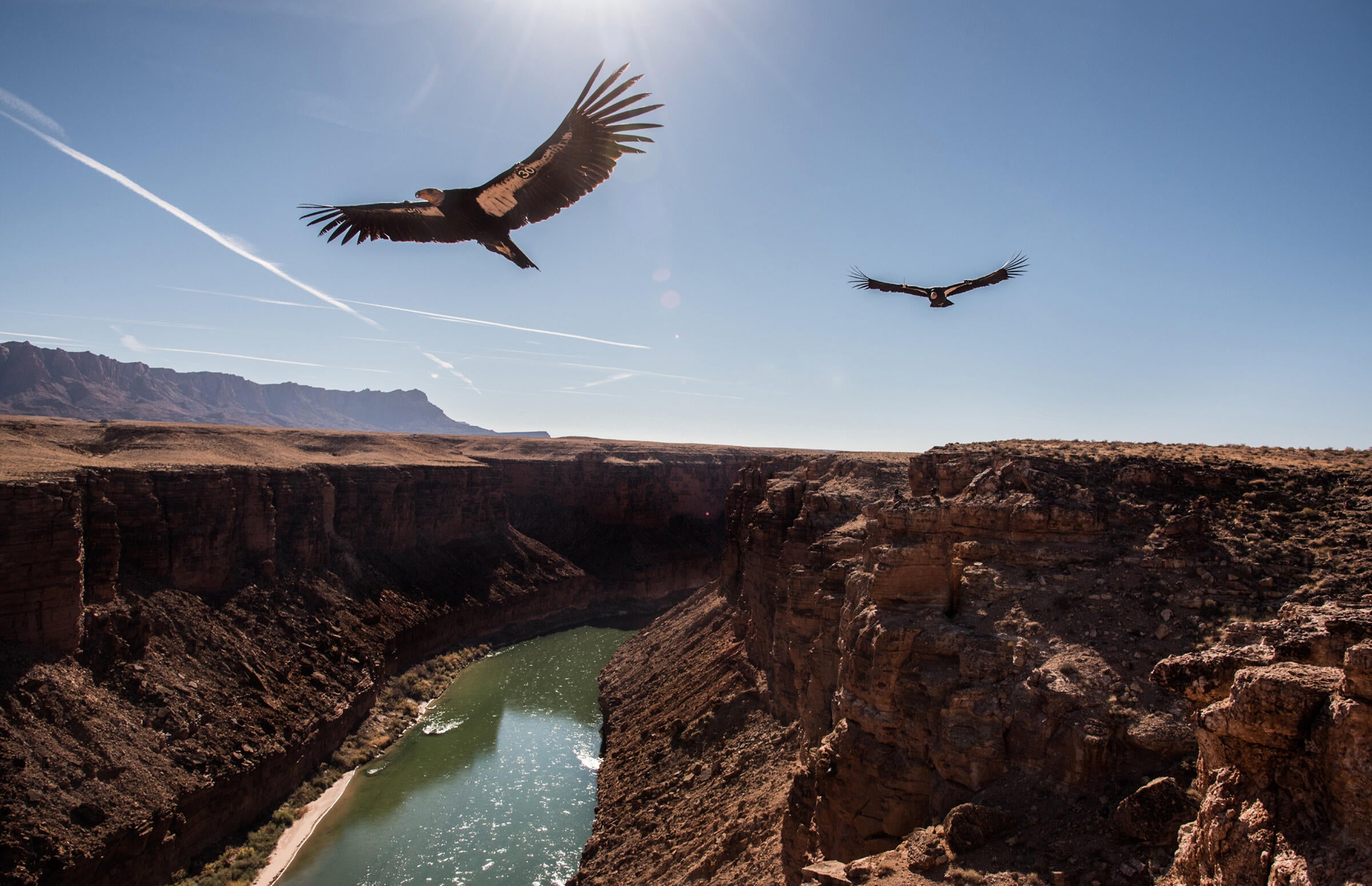 The Navajo Bridge is one of the best places to spot condors in Arizona from mid-winter to early spring. Photo: Dawn Kish 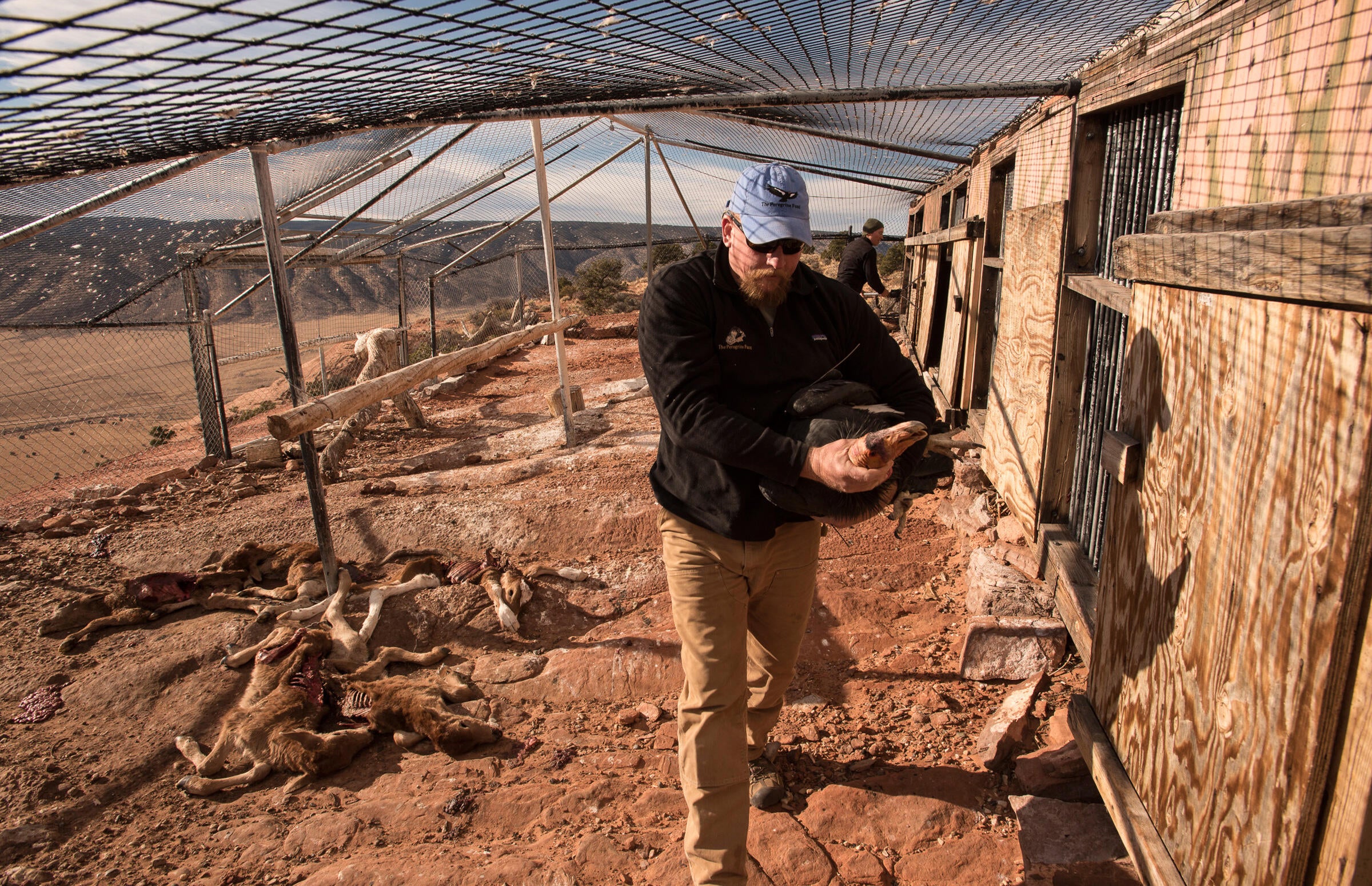 Chris Parish transports a recently captured bird from a holding pen to a processing area where he’ll take blood samples to determine whether the bird is suffering from lead poisoning. Photo: Dawn Kish 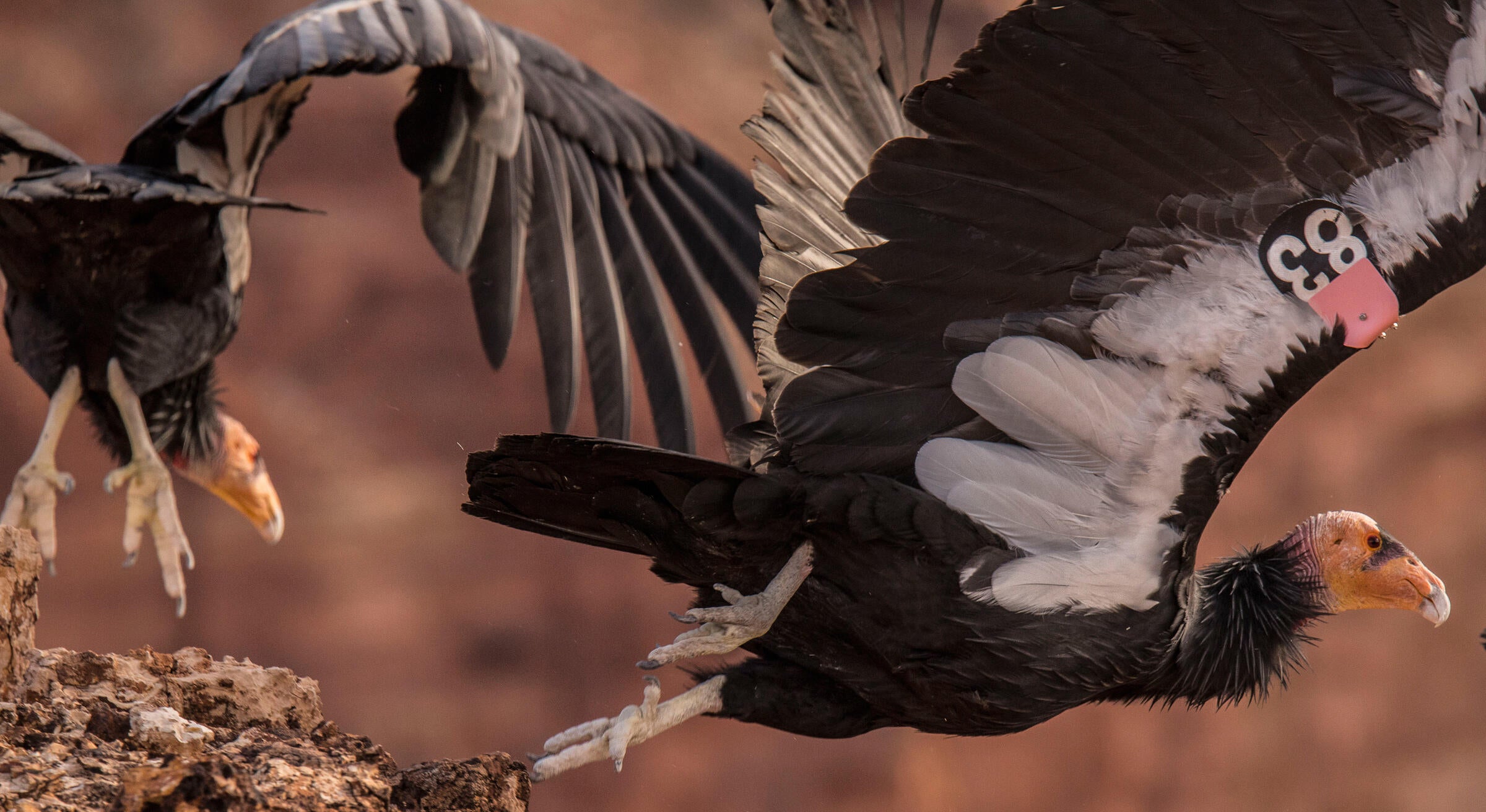 Condor #83, which hatched at the Peregrine Fund’s World Center for Birds of Prey in Boise, Idaho, in May 2005 and was released in Arizona in 2008, soars in Arizona skies. Photo: Dawn Kish 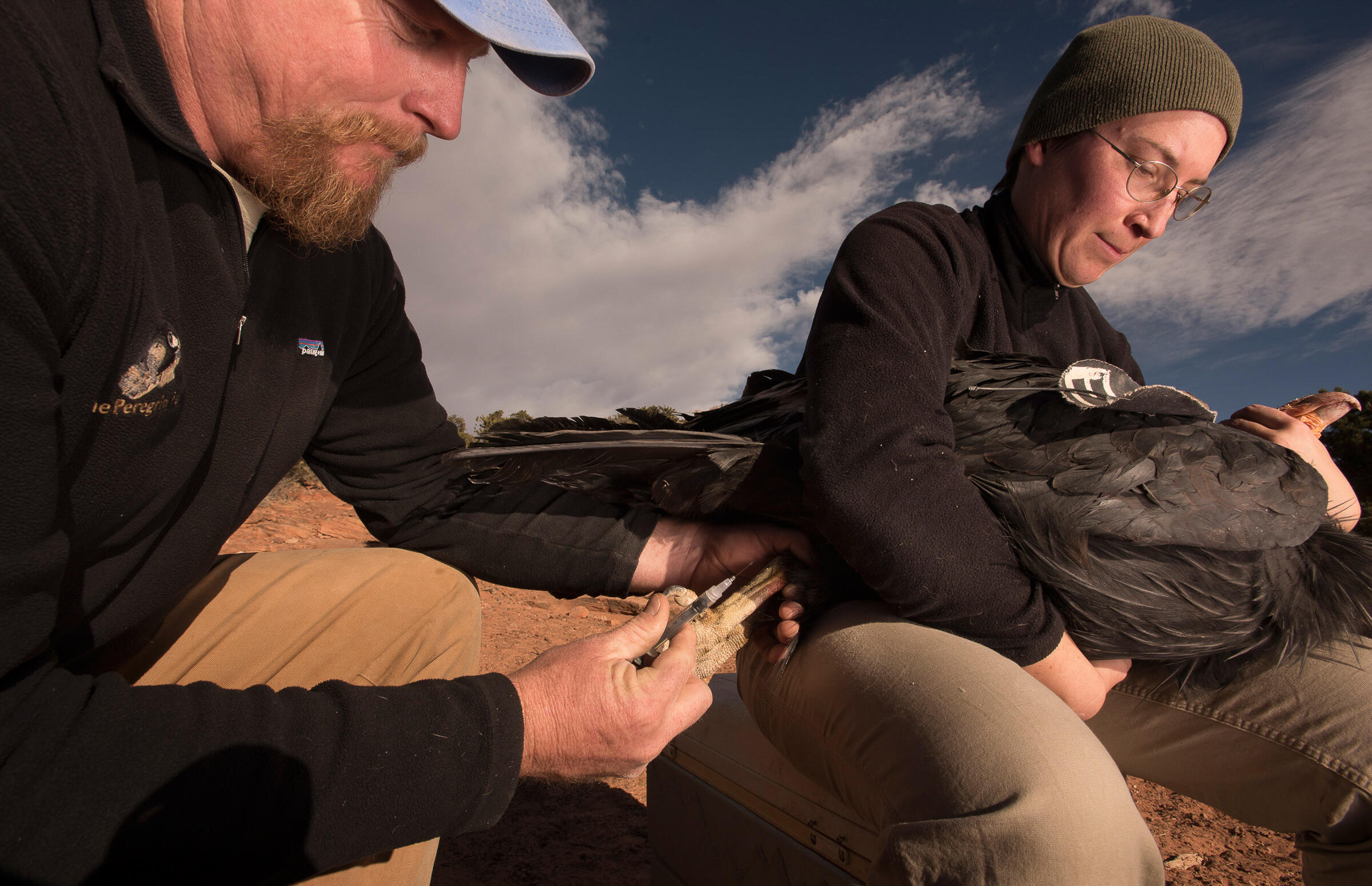 Chris Parish and condor biologist Erin Brannon, also of the Peregrine Fund, use a 1.5 ml syringe and 22-gauge needle to draw blood from a recently trapped condor. Photo: Dawn Kish 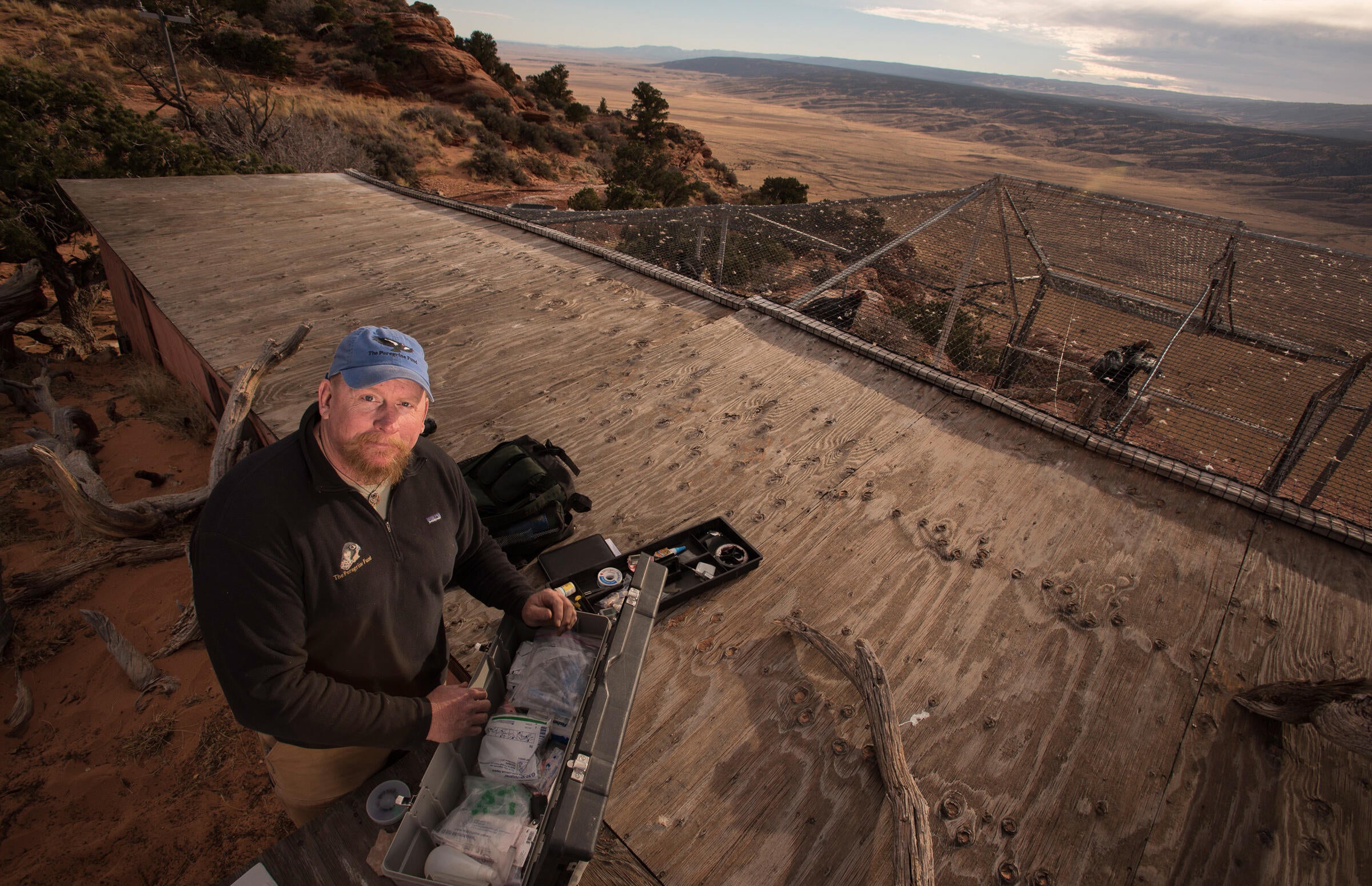 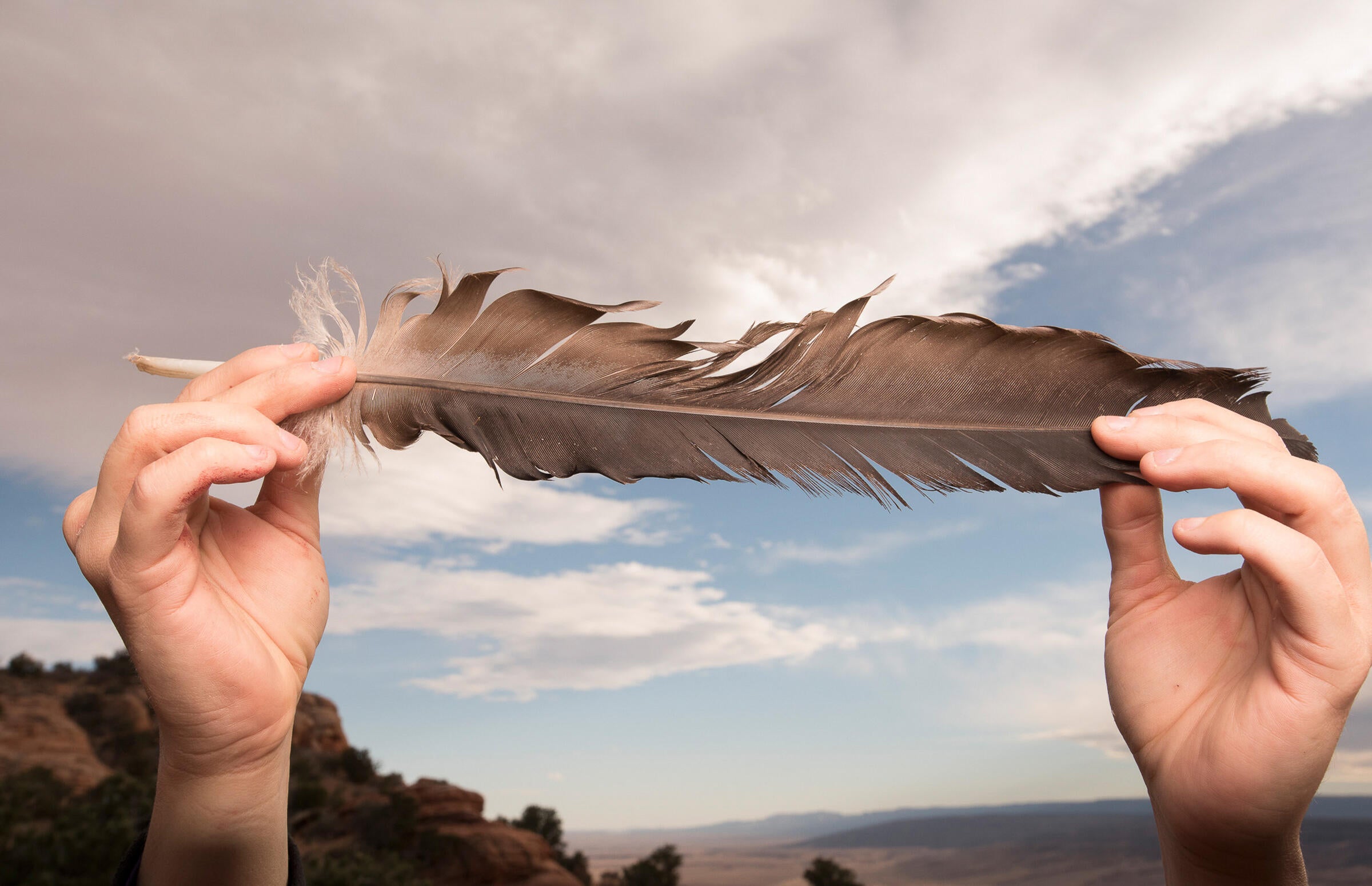 Erin Brannon holds a condor feather at Arizona’s Paria Plateau; it’s illegal to posses the feather of a condor, an endangered species, without a federal permit. Photo: Dawn Kish

By Jonathan Carey and Dawn Kish

By Jonathan Carey and Dawn Kish

Last year Chris Parish’s crew captured 70 or so California Condors in Arizona and Utah. Parish, condor project director for the Peregrine Fund, is testing the enormous scavengers for lead poisoning; they risk ingesting deadly amounts of the heavy metal from fragments of ammunition in carcasses they feed on. Twenty of the captured birds received chelation therapy, and all were ultimately released back into remote wilderness in the two states, where Parish has helped to successfully reestablish a population over the last two decades.

A hunter and conservationist, Parish has a particular affinity for condors, which clean up the remains left by hunters and predators. “They have unique personalities,” he says. “Each  is an individual.” The species almost blinked out three decades ago due to habitat loss, hunting, DDT contamination, and, above all, lead poisoning.

Today there are 410 in all, up from 23 in 1982. Up to 80 percent of hunters in Arizona and Utah have volunteered to stop using lead ammunition or to remove lead bullets from carcasses, thanks in part to Parish’s work raising awareness of the condor’s plight. Condors aren’t yet out of danger, but Parish is dedicated to giving them the best shot possible at survival.