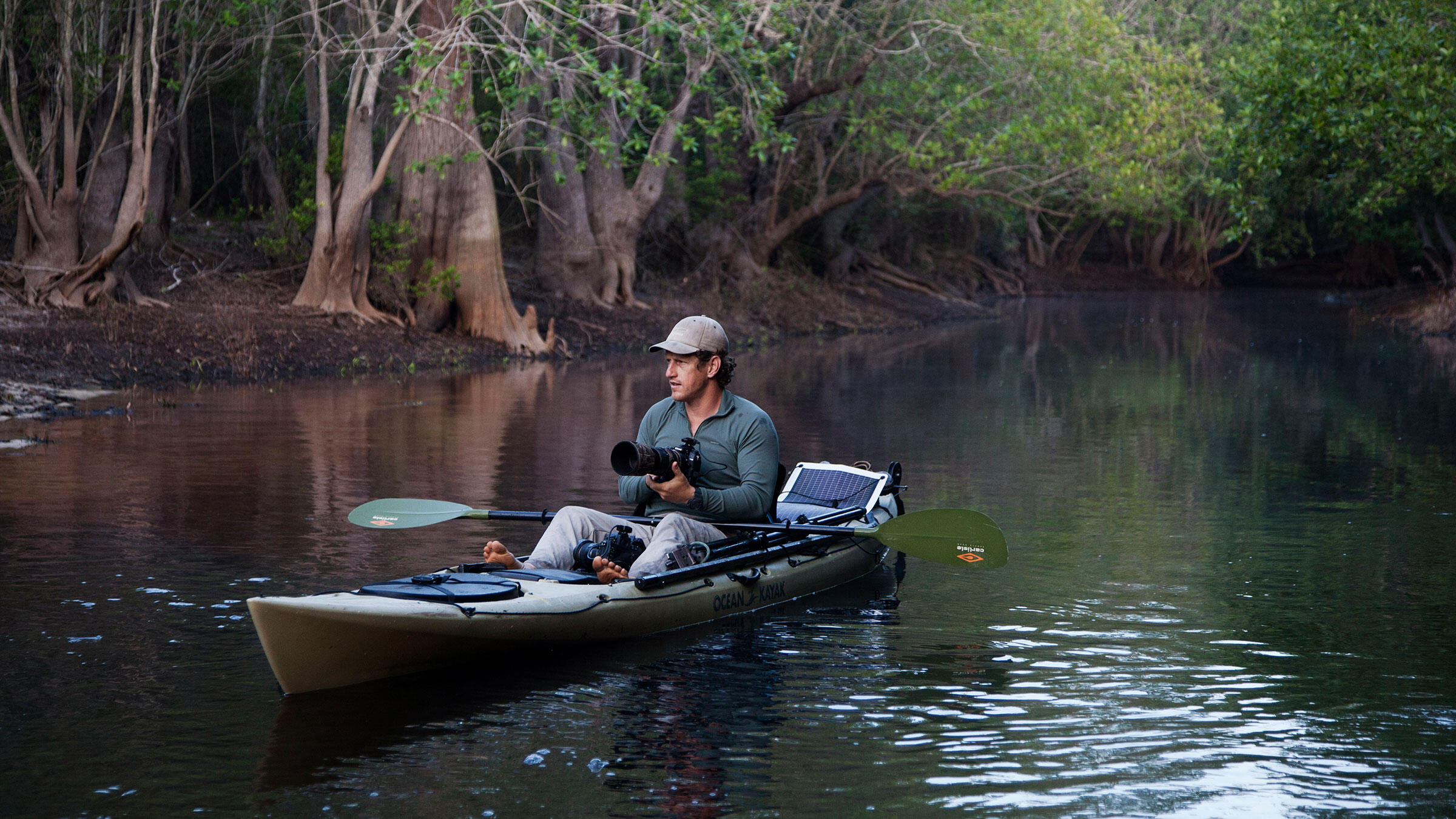 Photographer Carlton Ward Jr. in the Okefenokee Swamp. By using a boat, you're likely to see, and shoot, birds in an entirely new way. Kayaks can usually handle rougher water than canoes, though in open boats can carry more gear. Photo: Mac Stone

Photographing Birds From a Boat: A Guide to the Basics

For a whole new perspective, try a trip where you float.

You know the photo you really want. Maybe it’s a Common Loon navigating a remote lake in northern Minnesota. Or an Atlantic Puffin perched on Eastern Egg Rock, off the coast of Maine. Or a bunch of Roseate Spoonbills feeding in a backwater of the Everglades. The good news is that you can get that shot. The bad news is that it won’t be waiting for you at the end of a boardwalk. No, to get this photo, you’re going to need a boat. While water-based photography is in many ways similar to shooting on land, it does require extra precautions. Here’s how to stay dry and hold steady.

A fast flier of deepwater zones, the Black-capped Petrel is almost never seen from land in North America, except during hurricanes. But it occurs in good numbers over warm waters of the Gulf Stream. To photograph it, join a pelagic birding trip off the Outer Banks of North Carolina.

Power Trip: Head Out to Sea

Seabirds that feed on open water can be found from inshore waters to the edge of the continental shelf, which extends a few miles offshore in the Pacific and as far as 60 miles in the Atlantic. For photos of these birds, your best bet is booking a small charter or signing up for a pelagic birding or whale-watching trip.

Tripods are essentially useless on a pitching deck (and some captains actually forbid them), so good handheld-shooting skills are a must. Check carefully for potential tripping hazards, keep a wide stance, and steady the camera with both hands. Shoot in burst mode with a fast shutter and the aperture wide open; most modern autofocus can lock onto subjects as you follow them. Whenever possible, shoot with the sun behind you to avoid blank silhouettes, and use waves, clouds, or other compositional elements to add some interest to what could easily become a fairly spare frame.

The best spot onboard is usually the stern, where you’re closer to the water and where crewmembers might toss chum to attract birds like shearwaters, gulls, and albatrosses. No matter where you are in the boat, the spray means you’ll need extra protection, for you and your gear. Wrap your camera to shield it from corrosive saltwater, and layer yourself in well-fitted, waterproof clothing, including boots (no floppy hats or ponchos; they get in the way). Seasickness can ruin a trip, so stave off nausea with a dose of motion-sickness meds (non-drowsy!) and crackers.

Self-Propelled: Go for a Paddle

With a kayak or canoe, you can take your bird photography to places inaccessible by foot. Kayaks, which sit low in the water, can handle nearly any aquatic environment—from ponds and lakes to offshore swells. Their shallow draft puts you at eye level with birds. Chop or swells can make steadying a camera impossible, so choose your moments carefully: Wait for calm water, and then shoot handheld or use a camera bag on the deck to support your lens.

Canoes sit higher in the water, making them best suited for lakes and swamps. There’s room for extra equipment—perhaps a mid-telephoto lens—or even a friend. Extra stability means you can set up a tripod without it tipping. Be wary of sabotaging it yourself, however: Use a double-headed kayak paddle, rather than a canoe paddle, to avoid hitting your setup.

Camouflaging your kayak or canoe typically doesn’t fool birds, but too much movement will spook them. When paddling, keep the blades low to the water, and try to glide as you near the birds.

Kayak photographer Gary Luhm tried for 10 years to record the courtship ritual of the Western Grebe. Three years ago he finally captured it on the Potholes Reservoir in Washington State. The birds carry out an intricate dance that culminates in a quick-footed maneuver called rushing. “It’s just fabulous to watch,” he says. —C.I.

On a remote lake in the Everglades, three miles from her canoe launch, Connie Mier spent a morning shooting a rare flock of 30 wild American Flamingos. It was her first, and only, time photographing the towering waders. “Standing straight up they looked five or six feet tall,” she says. “They were huge and beautiful.”

Near-shore islands offer both relative safety to colonial nesting birds, such as herons and Roseate Spoonbills, and unique opportunities for kayak- or canoe-borne bird photographers. They also require particular care, since flushing birds off their nests leaves eggs or nestlings vulnerable to predators and the elements. As you approach a rookery, remove your paddle from the water, and glide forward quietly. Stay at least 50 yards away. If you seem to be disturbing any of the birds, back off. Never land on the island or get out of your boat. You’ll get the most interesting photos during the nest-building and chick-rearing stages. It’s hard to get good shots on sunny days unless you shoot very early or late. Better to choose a bright, overcast day, which will allow for even lighting on all sides of the island. Keep your shutter speed high, at least 1/500th of a second. If your camera has image stabilization or vibration reduction, make sure they’re turned on. Last, stay into the early evening, when you can get some great flight shots of birds returning to roost for the night. —Melissa Groo

Clean Sweep
Remove salt spray when you’re back on dry land. Use a microfiber lens cloth and fluid to wipe the lens, and carefully swab the body (including inside the battery compartment and under the pop-up flash, if you have one) with cotton pads soaked in rubbing alcohol.

Lighten Up
Stepping down from a full-frame camera quickly reduces heft. Photographer Gary Luhm sometimes switches from a Canon DSLR to a cropped-frame camera (in his case, a Sony a6300), which allows for a smaller, kayak-friendly lens while still getting a good reach.

Ditch the Anxiety
As you’re getting ready, consider 1) how comfortable you are in a boat and 2) the value of your camera gear. If the answers are 1) not so much and 2) really high, you run the risk of turning an enjoyable outing into a high-stress trip.

The steady Necky Manitou 130R kayak (top; $1,500) has a large cockpit, ample storage, and a rudder for precise navigating. A canoe/kayak hybrid, the Native Watercraft Ultimate 12 ($949) has great stability and an open design, making entry and camera set-up simple and safe. While on the water, keep your gear secure and dry: Ultra-light and waterproof, Pelican’s 1525 Air Case ($225) stows a DSLR body and telephoto lens; the waterproof zipper on Watershed's Ocoee dry duffel ($105) locks out moisture better than roll-top closures; and Vortex’s Media Storm Jacket (from $38) fits snugly to shield a DSLR lens hood from the elements. Protect yourself, too: The low-profile Stohlquist Spectrum ($80) life jacket won’t impede your movements. Unlike most breathable rain jackets, the water resistance of Columbia’s OutDry Ex Gold Tech Shell ($175) won’t wear off; a new fabric blocks moisture without the need for chemical coatings. —Alisa Opar