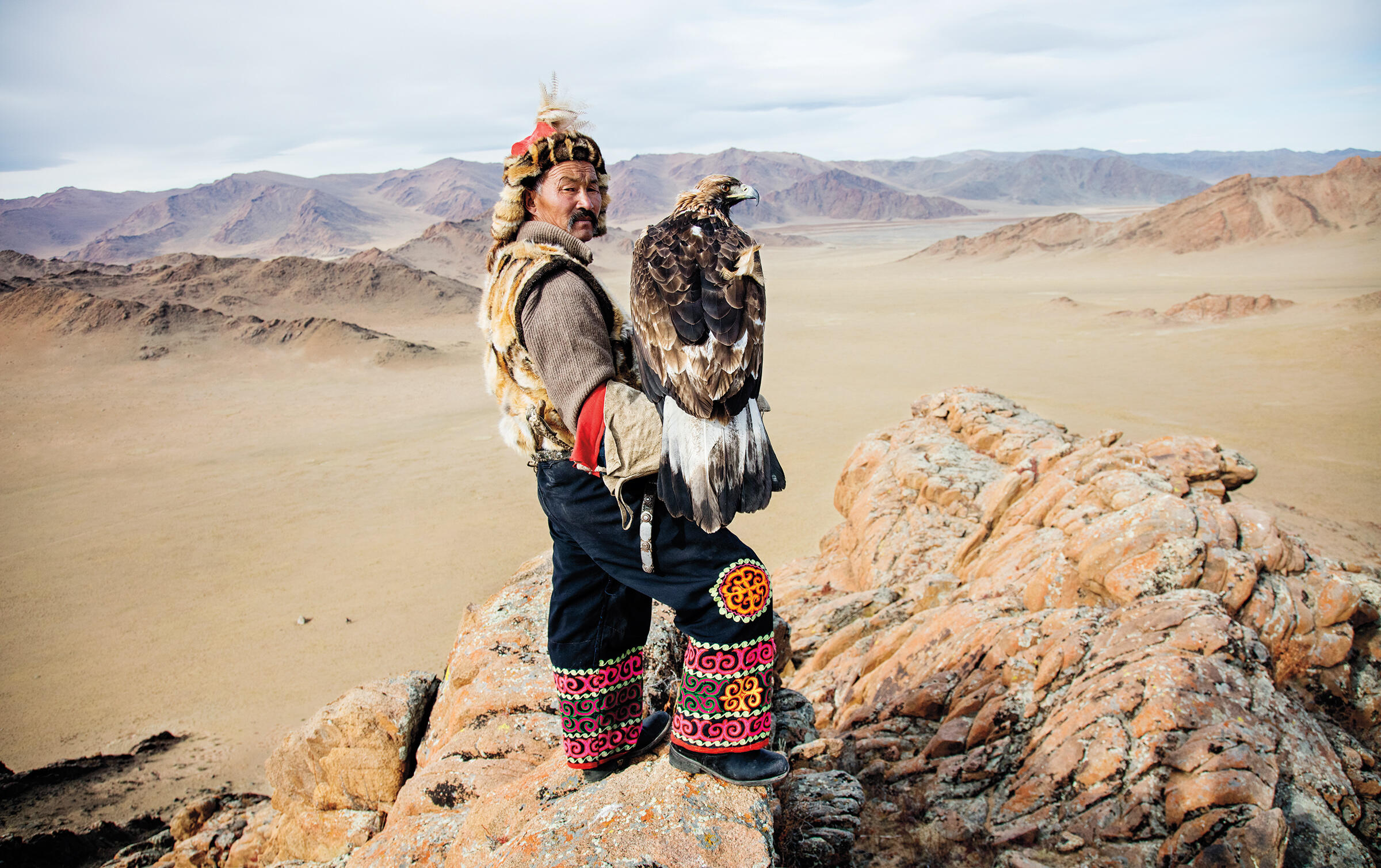 Since the time of Kublai Kahn, the Kazakh people have allied with raptors to find sustenance in a barren, mountainous land.

By Jonathan Carey and Cedric Angeles

By Jonathan Carey and Cedric Angeles

Atop the ridges of the Altai Mountains of western Mongolia, Dalaikhan Itale and his trusted companion prepare for the hunt. When Itale spots a fox or hare in the valley below, he’ll release the Golden Eagle to swoop down and capture the prey.

For centuries burkitshi, or eagle hunters, have provided the Kazakh people with food during the frigid winter months. Eaglets are captured from their nests high in rocky crevices and live for many years with the families of hunters, who begin training them at age 13. Only female birds are selected, as they ultimately grow to be larger than males, giving them an edge as hunters. The bond between trainer and bird is deep; she answers only to his voice.

The burkitshi tradition dates back to the reign of Kublai Khan, who went out hunting with thousands of birds and falconers. These days, the burkitshi’s ranks number several dozen.

Dalaikhan Itale, an eagle hunter for more than 35 years, continues to work to perfect his calls and landing techniques. Photo: Cedric Angeles/Intersection Photos

Leather straps called “jesses” attached to the legs of Cheruch’s eagle dangle in flight. When she’s sitting on his forearm, he grips the anklet to keep her from taking flight. Photo: Cedric Angeles/Intersection Photos

Itale's saddle is equipped with a baldak, a Y-shaped rest made from wood or bone that supports his arm so that he can hold his eagle while riding on horseback. Photo: Cedric Angeles/Intersection Photos

An eagle hunter on horseback high in the Altai Mountains scans the valley for foxes and hares; once the prey is spotted, he’ll release the eagle to capture its target. Photo: Cedric Angeles/Intersection Photos

Some eagles are transported by vehicle for longer trips; covering their eyes keeps them calm while traveling. Photo: Cedric Angeles/Intersection Photos

Tradition calls for hunters to set birds free after about a decade, so one spring morning Itale will let her go. If necessary, he’ll hide or wait until dark to ensure she doesn’t follow him home, and that she lives out the rest of her life in the wild.