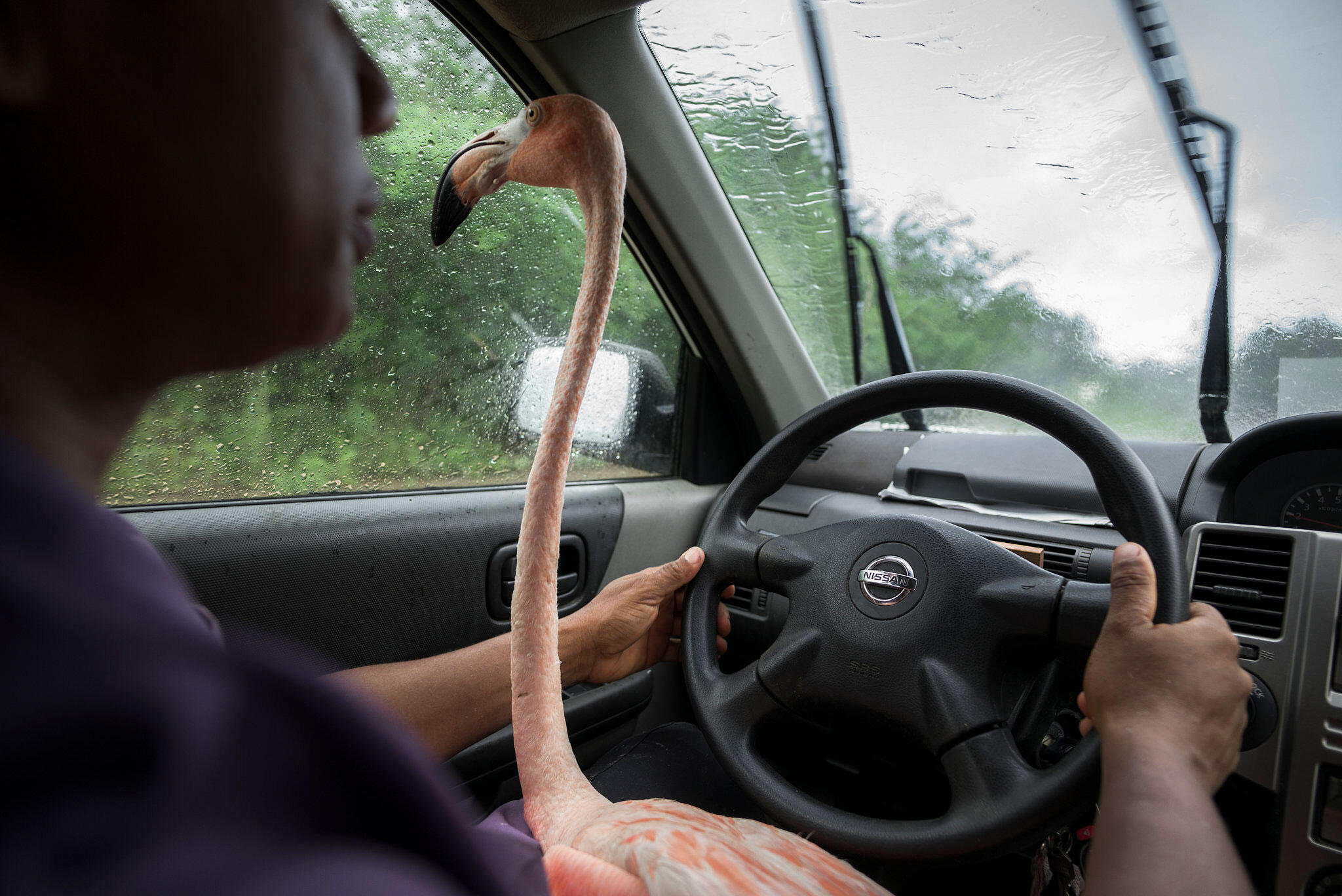 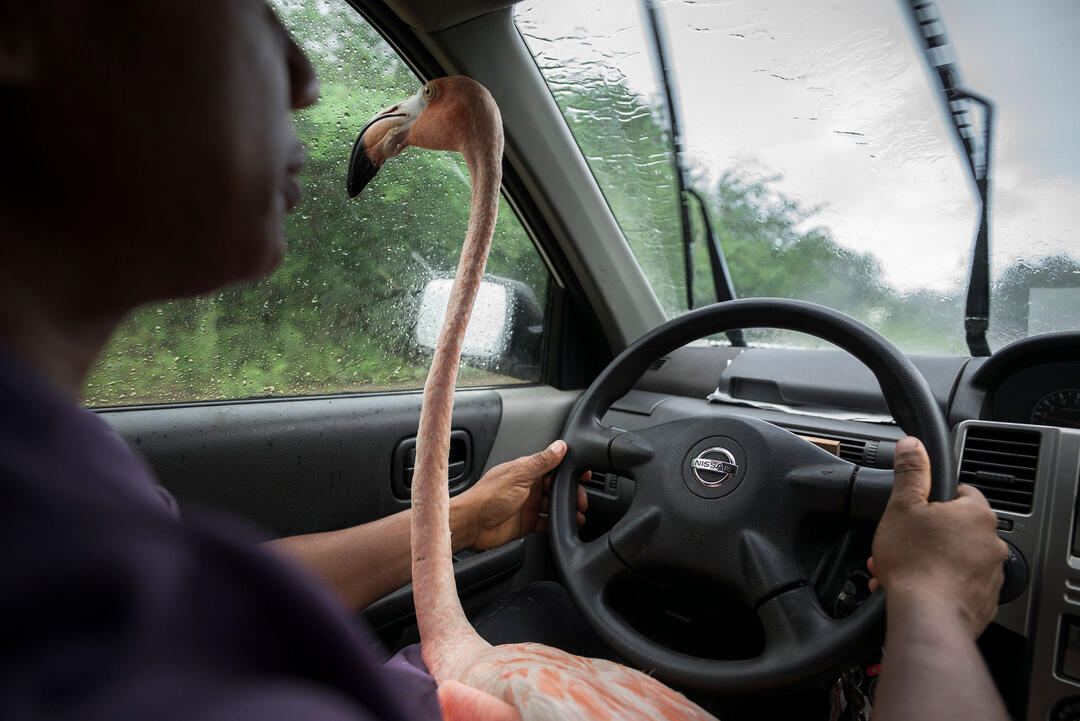 The Busy Life of Bob the Flamingo

Once badly injured, the recovered bird now teaches residents of Curaçao about the importance of conservation.

By Jasper Doest and Meghan Bartels

By Jasper Doest and Meghan Bartels

When veterinarian Odette Doest arrived at her local radio station on the Caribbean island of Curaçao for an interview about wildlife conservation, her companion, Bob, startled the staff. Doest told them she’d be bringing a flamingo, but they’d assumed she meant the plastic variety.

The unlikely duo met in October, after Bob (whom Doest named spontaneously when  the radio host asked his name) crashed into a hotel window and collapsed near the pool. Doest,  an exotic-pet veterinarian who rehabilitates wildlife on the side, learned of the accident via Facebook and rushed over. She quickly realized Bob couldn’t be released, because of his unnatural affinity for human company. So Bob became part of Doest’s rescue flock, which includes macaws, boobies, and a caracara. The birds live on her yard and porch-turned-aviary, next door to her office.

When wildlife photographer Jasper Doest visited his cousin Odette, he was so enchanted by Bob’s charisma that he began documenting the flamingo’s busy life. Doest brings Bob to schools and media outlets to educate locals about his wild kin. The island is home to around 250 of the elegant waders, but most of the country’s almost 160,000 inhabitants aren’t familiar with the birds or the threats they face, such as resort development encroaching on feeding and nesting habitat or injury from loose dogs. “I’m often surprised that my fellow islanders don’t really know what’s out there in the wild,” Doest says.

While Doest would have preferred to free Bob, she says he’s helping to instill a conservation ethic in the next generation. Kids want  to know all about the four-foot-tall pink bird: how his life differs from that of his free-flying cousins, why his feathers are pink (as a result  of compounds in the shrimp and algae he eats), and his favorite snack (caviar, which he tries to eat straight out of Doest’s hand). After each school visit, Doest asks one student to carry Bob back to her car. “You see them glowing with pride,” she says of the newest members of Bob’s growing fan base. 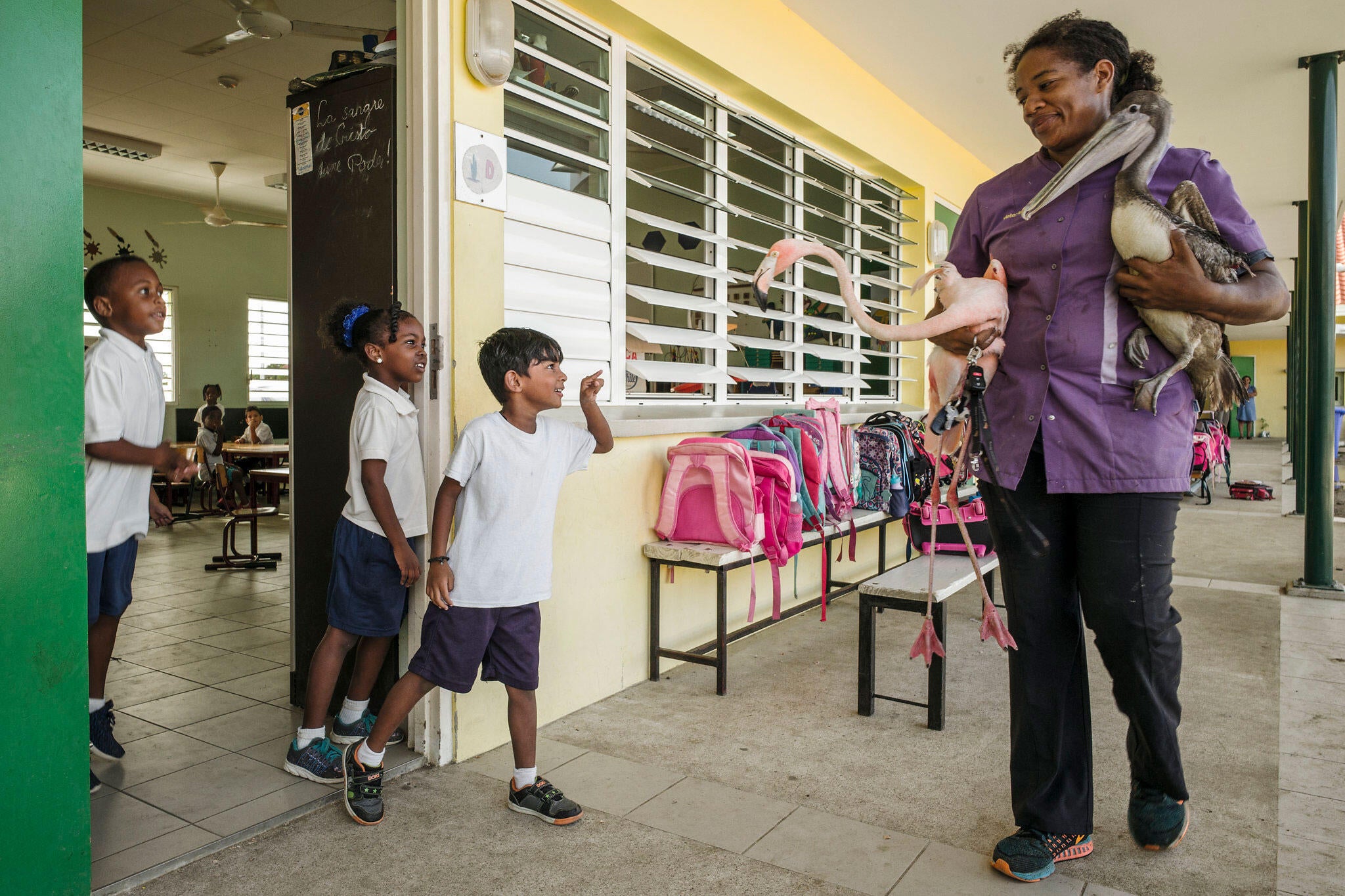 Odette Doest arrives at the A.E. Goiloschool in Julianadorp with Bob and a pelican that lost a wing. Doest originally funded her rehab work herself, but the climbing costs of caring for the birds spurred her to set up a foundation in order to accept donations. Today she treats four or five rescue birds in a typical week. 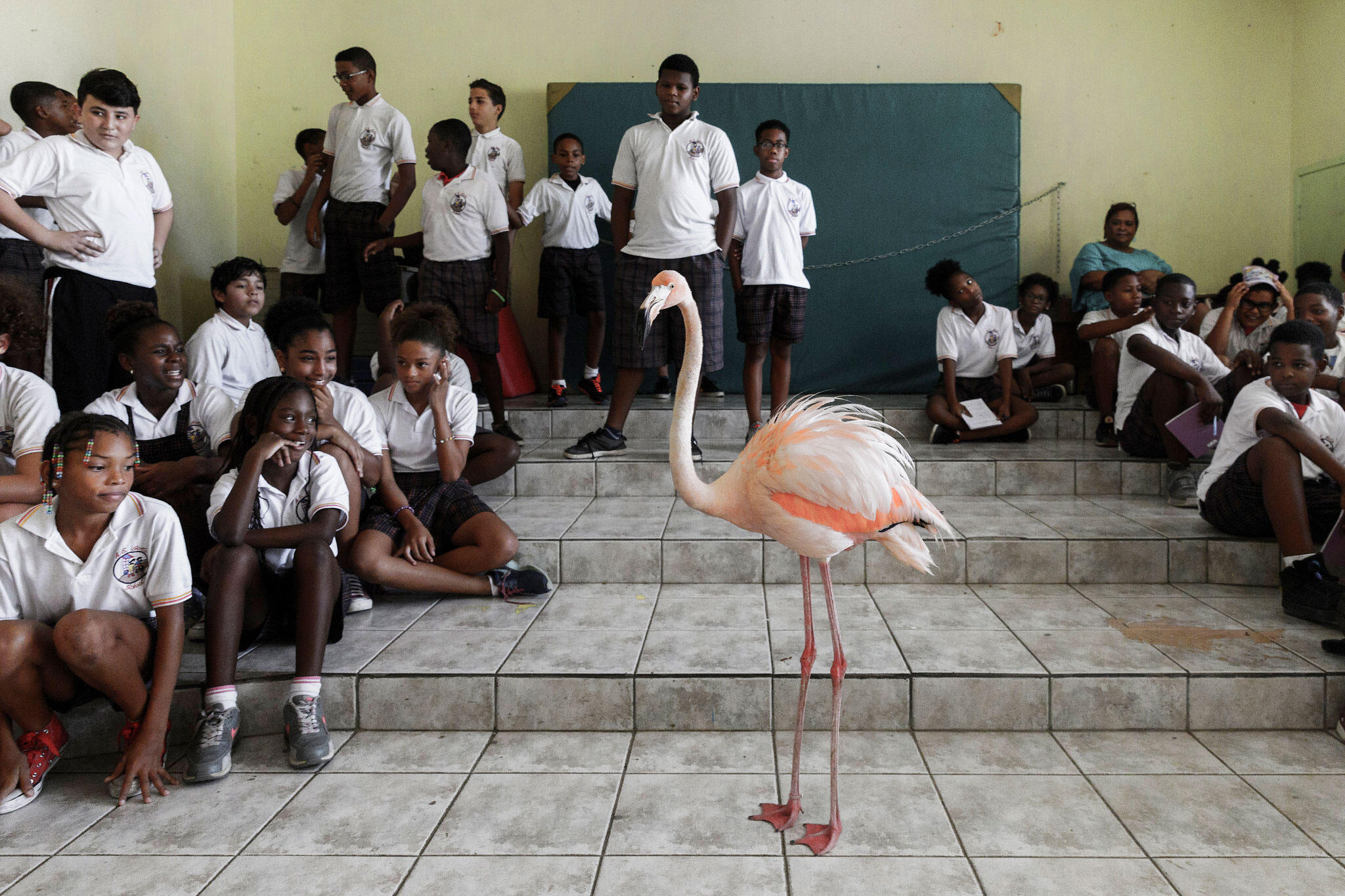 The students knew they’d be meeting a veterinarian, but they didn’t realize she would be bringing live birds with her. “It was a big surprise for them,” says Jasper Doest. Visiting the school was one of the photographer's favorite parts of his visit to Curaçao. Some of these children had never seen a flamingo in the wild, much less up close, and it was fun to see the kids' enthusiasm for the tall, pink visitor. “I could have done that for a full week,” he says. 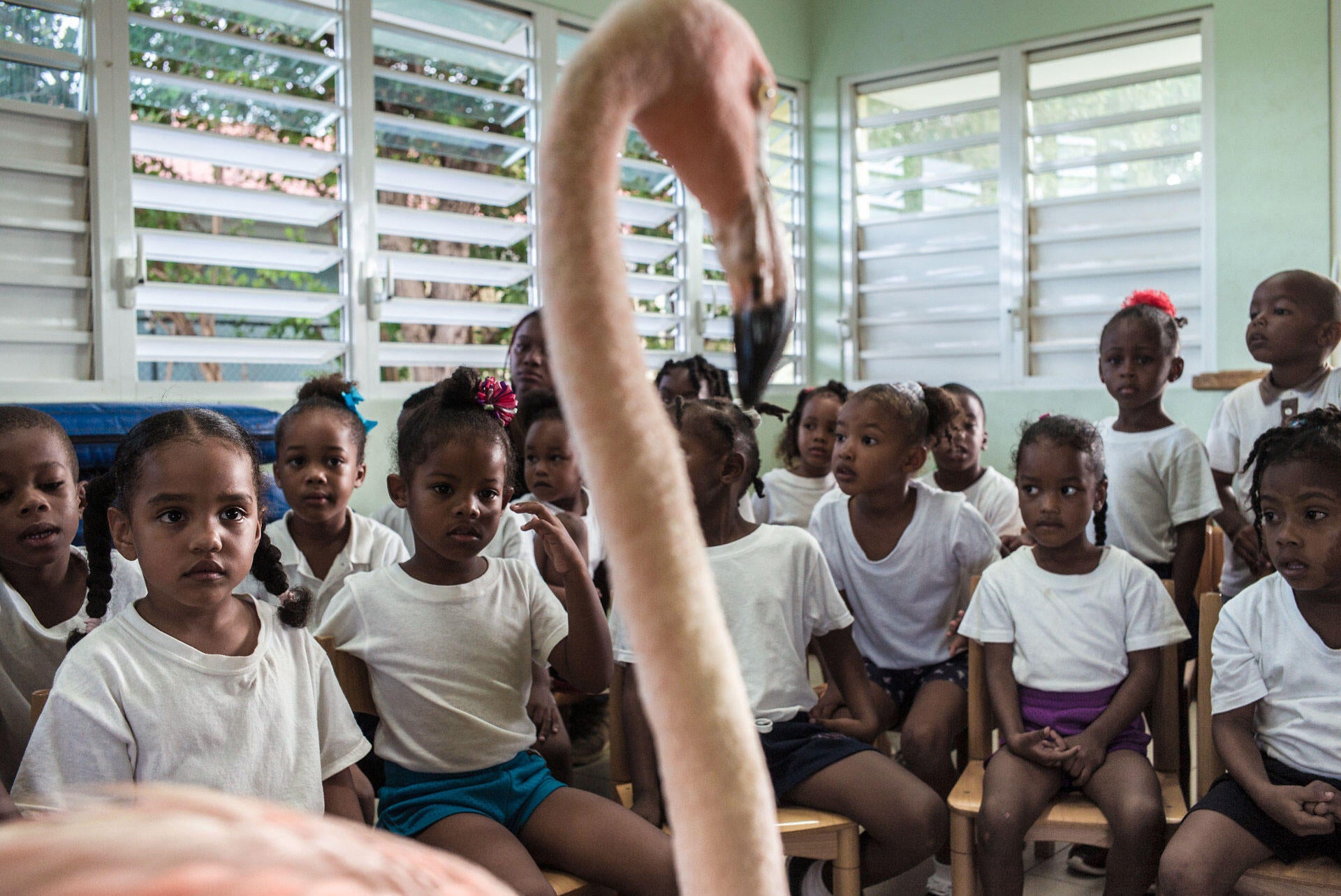 Flamingoes and people have a strained relationship on Curaçao. Resorts encroach on the birds’ feeding and nesting habitat, and loose dogs attack and injure, or even kill them. Our obsession with selfies also harms the birds; Doest says some people trying to get the perfect shot throw stones to get photos of the birds in flight. 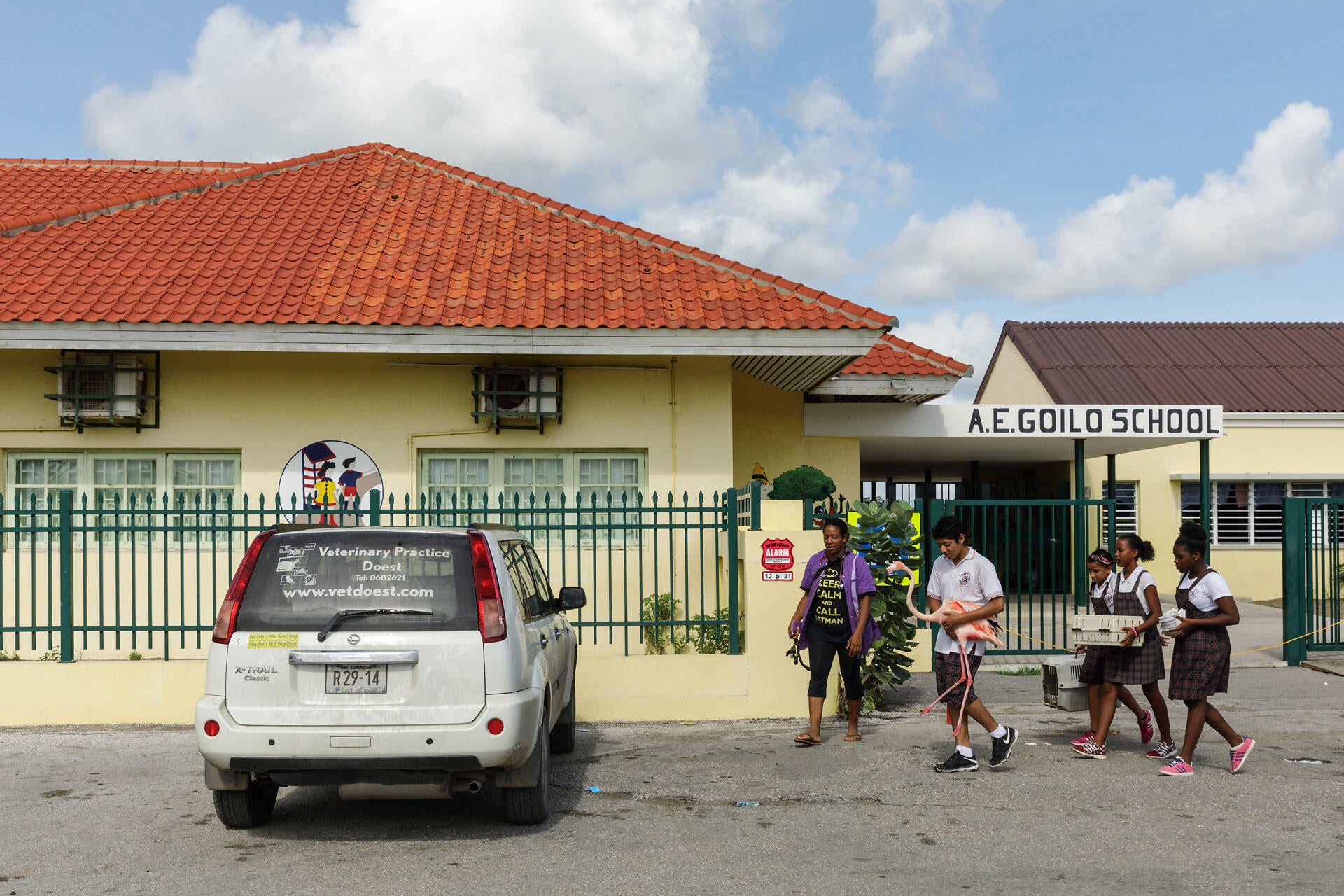 Being carried back to the car by a student doesn't perturb Bob, who has spent most of his life in the company of humans. Odette Doest has learned that he was raised by people as part of a private flock, and then released into the wild by his owners last year. 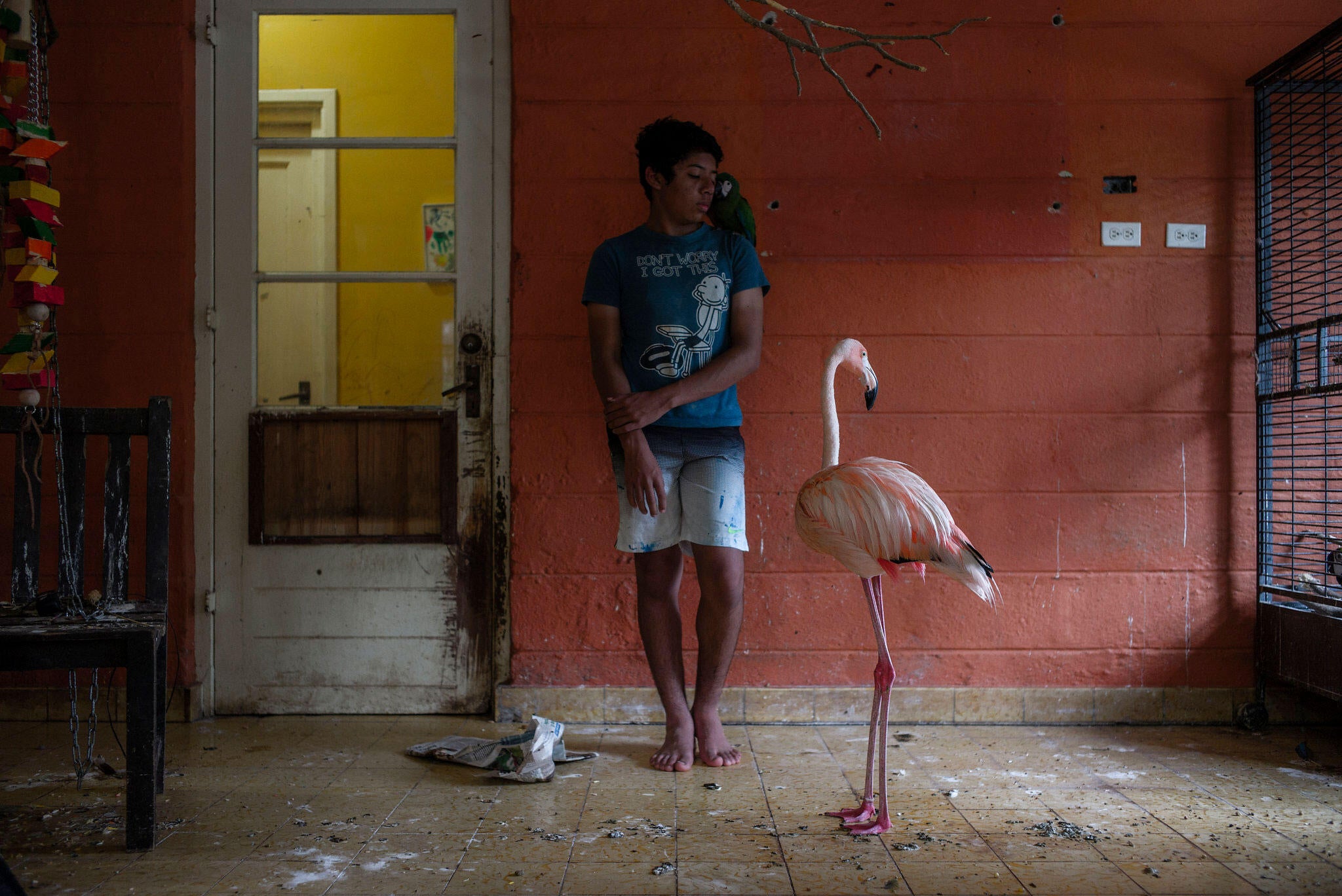 Bob with Odette Doest’s son and the family’s pet parrot on the porch, which has been converted to an aviary for rescue birds. 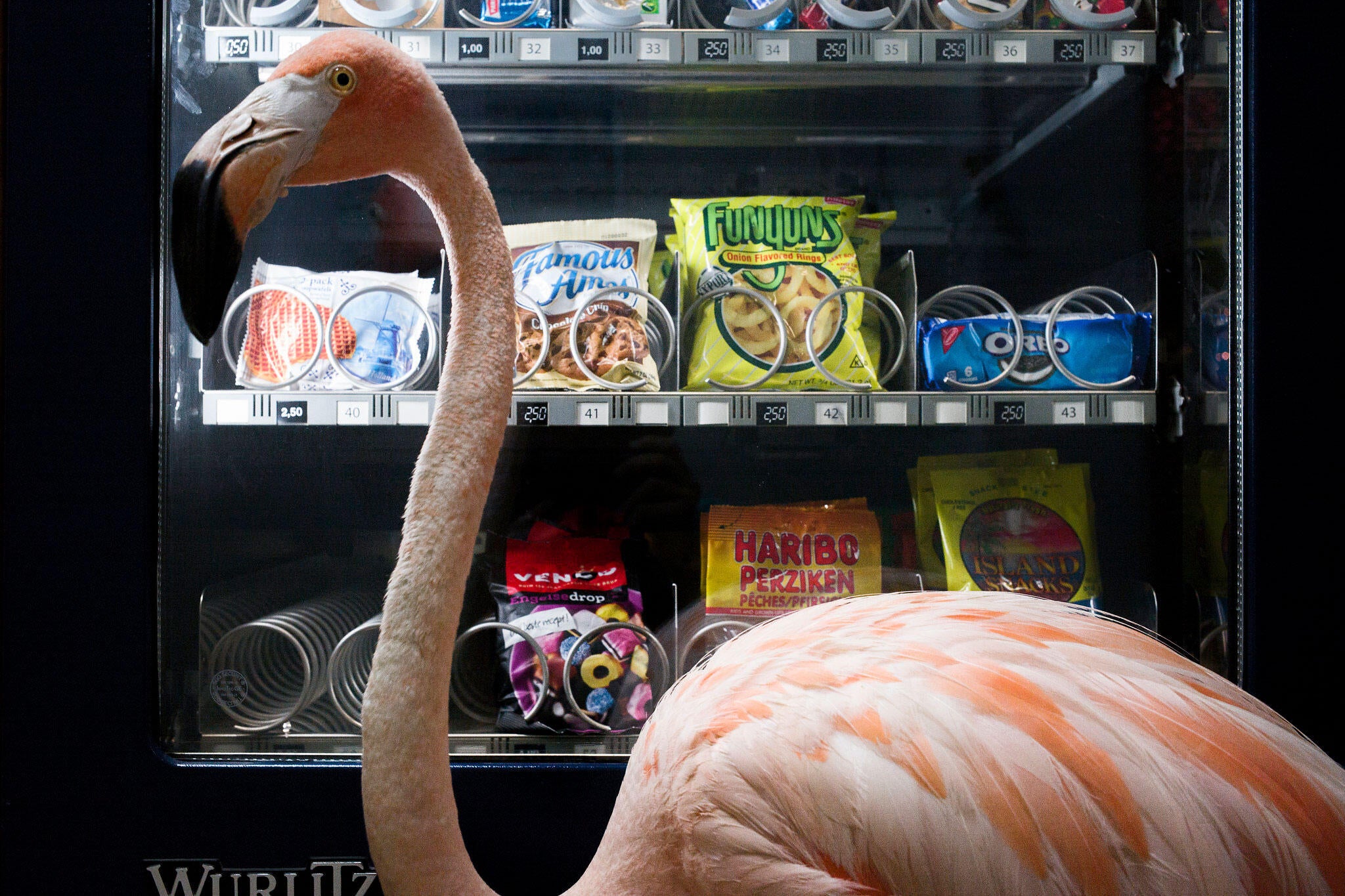 Bob is likely struck by his own reflection—rather than a case of the munchies—when he wanders over to the vending machine on his visit to a local television station. Again and again during his visit, Jasper Doest found himself enchanted by the humorous contrast of the gangly pink bird in human settings. “Some of the images are so funny or so bizarre,” he says. 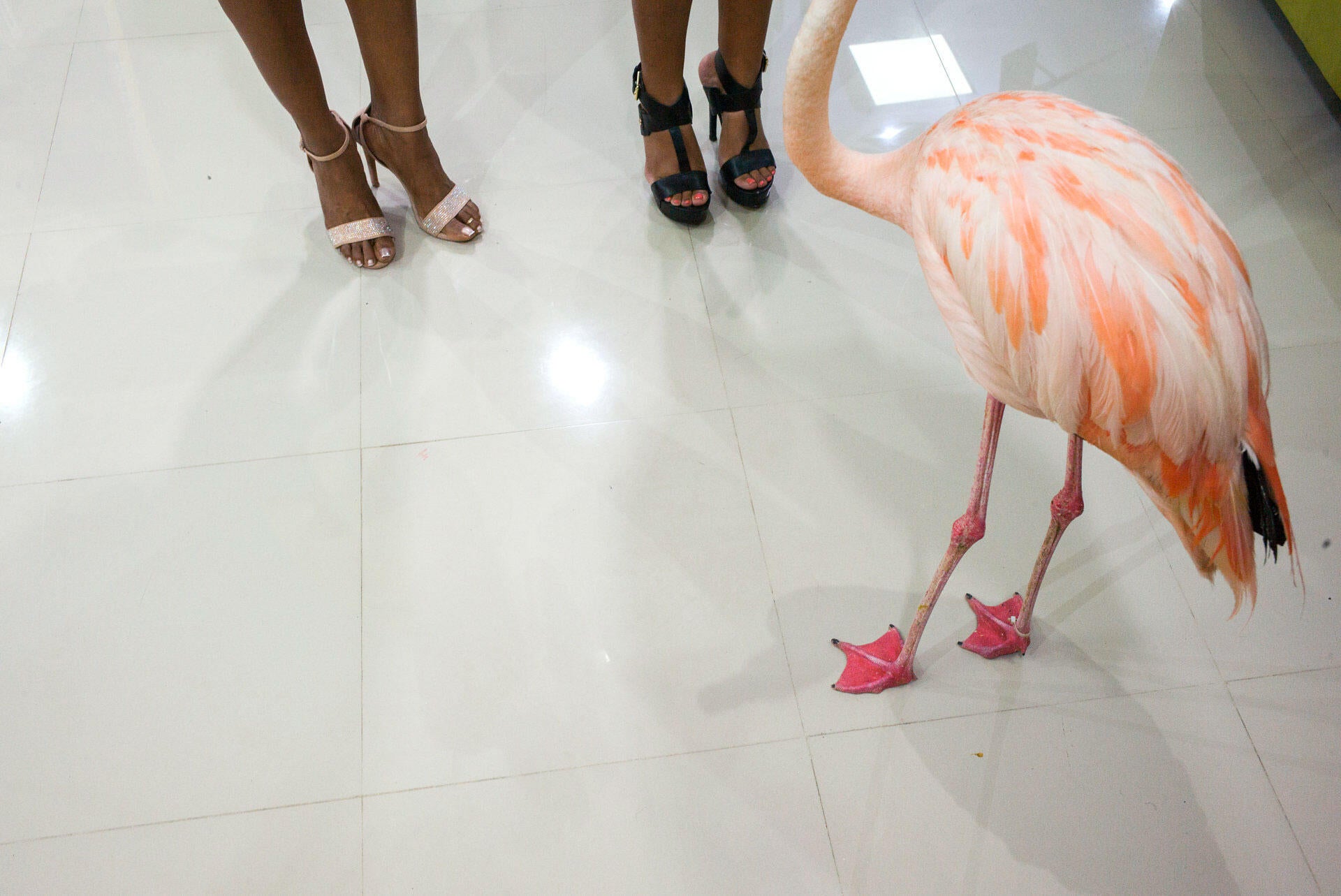 Both Doests wish Bob could make his way in the wild, but they take comfort in his newfound role as a conservation symbol. During Jasper Doest’s visit, Bob appeared on a local television news show, in addition to other social engagements. “He’s making a difference for all those flamingos out there on the mudflats,” Doest says.