When a male Boreal Owl visits its nest, it doesn’t linger long. The hunter arrives in the dead of night to deliver prey to its mate and chicks, then immediately flies away to start the ritual again.

In 2012 Markéta Zárybnická, an ecologist at the Czech University of Life Sciences Prague (CULS), set out to catch these fleeting moments in detail with her colleagues. The birds are endangered in the Czech Republic, and learning more about their eating and breeding habits and how environmental factors affect these activities could help the researchers determine how to protect them. But because the raptors are nocturnal, little is known about their lives. “It’s very difficult to follow such a species,” Zárybnická says.

So her team developed a clever solution: the Smart Nest Box, a wooden contraption (covered with slippery aluminum plates to thwart pine martens) that furtively films its tenants. Once an owl breaches the infrared light beam at the entrance, it takes just 16 milliseconds for one camera to start recording the door, then another to kick in and document the action on the box’s floor. The researchers also installed a microphone, temperature sensors, and a radio-frequency ID reader to log tagged birds.

After months of finessing, the team deployed four of the boxes in the Czech Republic’s Ore Mountains in 2014. The videos they’re recording (see montage above) open up a window into the quirks of Boreal Owl parenting. For instance, the footage shows that male birds always place prey directly in the female’s or nestling’s beak rather than tossing it on the floor. When the young birds are ready to fly, the male sometimes appears with food, but then departs without giving it to them, probably to encourage the fledglings to leave their home.

Occasionally, the female accepts the male’s prey, then exits the nest to enjoy a meal alone. “She wanted some calm place where she could eat it,” speculates team member Jiří Šindelář, a biologist at CULS. The female is particular in other ways as well: She will arrange dead mice and voles in neat rows, placing the heads in the corners of the box. And on colder days, she’ll spend more time sitting on the eggs to keep them toasty. Collecting this basic, yet fascinating, information could allow scientists to pinpoint abnormal adult behaviors and diagnose problems such as scarce food, Zárybnická says. 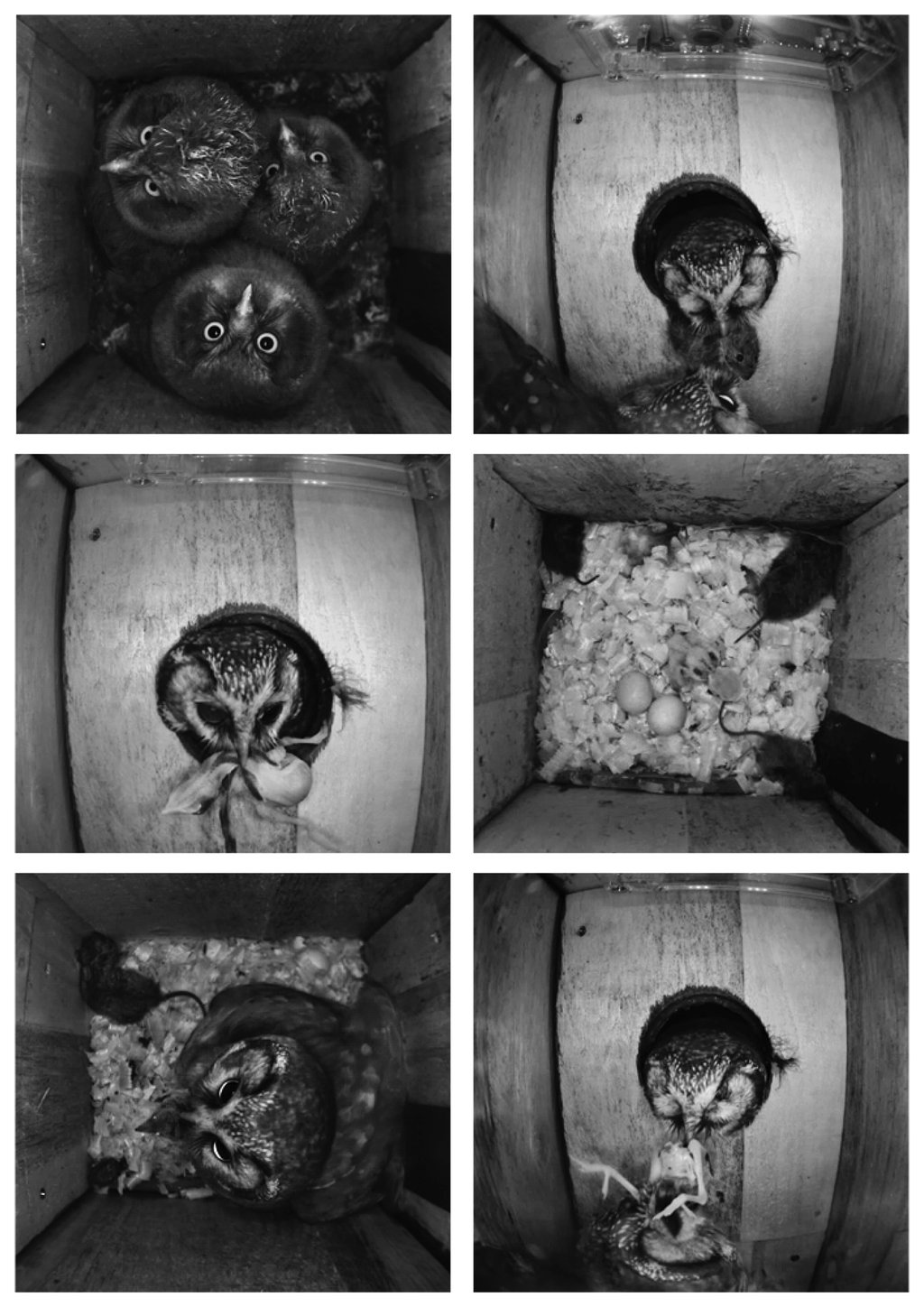 While the idea of gathering video or environmental data from nest boxes isn’t new, the Czech technology is novel in its integration of several sensors, says Charles Eldermire, Bird Cams project leader at the Cornell Lab of Ornithology, who was not involved in the research. This makes it easier to investigate how environmental factors such as temperature affect the owlets’ lives.

And the box has as-yet-untapped potential: Zárybnická believes it can be used as a tool to educate students, entertain hospital patients, and forge a closer connection between science and the public. In 2012, while she was on maternity leave, a few parents questioned her on why she studied owls; Smart Nest Boxes could be the way to bring more light to bird research, she thought. So Zárybnická's crew began setting up more of them, mainly at schools and private homes. Since 2016 more than 30 boxes have gone up around the Czech Republic and neighboring Poland to record owls and backyard birds. The result is a treasure trove of more than 300,000 videos, available online at birdsonline.cz.

The clips, which are viewed in local classrooms, play like a highlight reel of the daily dramas of avian families. In one scene, a European Starling spruces up a bed of grass with a buttercup; in another, a Eurasian Blue Tit removes a fecal pellet from a nestling’s bottom. More somber glimpses reveal Great Tit chicks succumbing to parasitic mites, and a pine marten wriggling into a Boreal Owl nest to gobble up the eggs.

The videos inspired some young viewers to write and illustrate “bird books,” including a story of a Great Tit named Petr who organized a pentathlon for females to compete for his affection. And one biology teacher noted that the project was a useful way to demonstrate nature to students through enriching lessons. “This is one possibility to show real life,” Zdeněk Borna says.

Zárybnická’s team wants to debut the Smart Nest Box in the United States by 2018. They also plan to use it for more research: to compare Boreal Owl behavior in different habitats and analyze how light pollution affects songbird routines. One thing’s for sure . . . with the camera constantly rolling, there will always be fresh enigmas to explore.

It’s easy to help out this threatened bird—here’s how.

A Bird Flies Into a Bar

In Norway’s latest melodrama, there are fewer tears, more tweets.