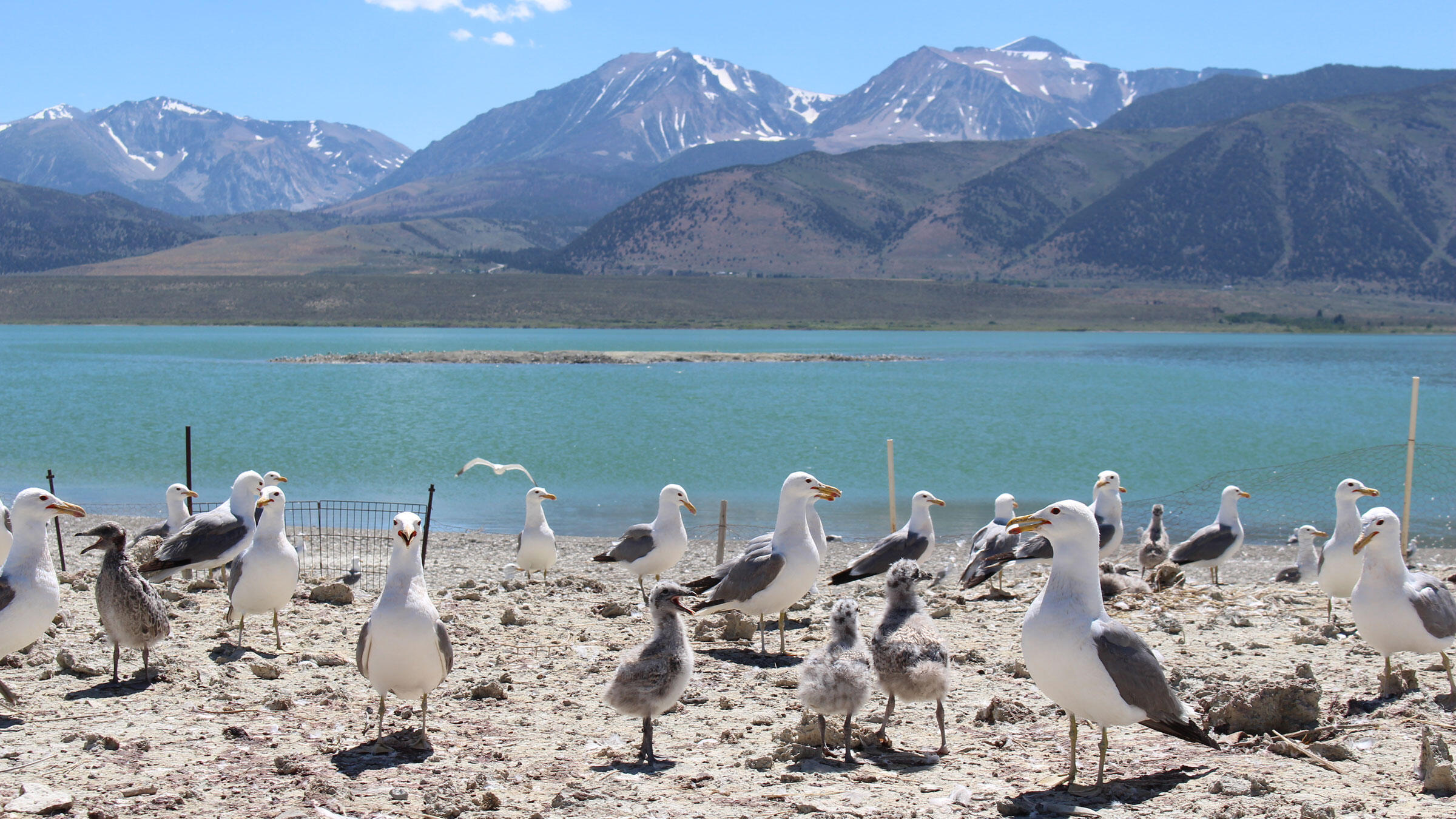 California Gulls nesting on the islets in the Mono Lake Basin. When water levels are up in spring and summer, the colonies are protected from predators on shore. Photo: Courtesy of Mono Lake Committee

An electric fence might provide a quick fix, but what the lake really needs is water. 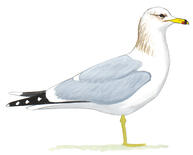 A dusting of snow has settled over the sage-covered hillsides, barren volcanic isles, and tufa towers of California’s Mono Basin—a promising start to a critical season for this ancient inland sea. The 70-square-mile lake at the eastern edge of Yosemite National Park has been gradually losing water since 2008, but a wet winter would provide a boost to its dwindling levels, which supply a feast of brine shrimp and alkali flies to more than 100 species of birds, including one of the world’s largest rookeries of California Gulls.

The water also forms a natural barrier against wily, hungry coyotes. Most years the mile-wide moat between the shoreline and the atolls is enough to keep the birds safe. Yet five consecutive drought years and a weak El Niño have left Mono Lake at its shallowest in two decades. If the water drops another foot (a possible outcome over the next season) it threatens to expose multiple landbridges, putting the eggs and chicks of roughly 45,000 nesting California Gulls within scarfing range of coyotes.

"Once coyotes realize there are eggs for the taking, there's little we can do to outsmart them," says Geoff McQuilkin, executive director of the Mono Lake Committee, an organization devoted to protecting the region's unique ecosystem. Kristie Nelson, who studies California Gulls for the wildlife-research group Point Blue Conservation Science, notes that a single coyote could wipe out hundreds or thousands of nests on each yacht-sized islet. That’s what happened in 1979, when a canine invasion caused entire gull colonies to abandon ship, limiting breeding counts for at least three seasons. A similar disaster ensued in 1990.

“Coyotes are not the enemy,” McQuilkin says, “but no one wants to see the gull colonies decimated.” His camera trap caught the carnivores lurking along the perimeter of the lake on several occasions this year. To avert disaster when the birds return in spring, officials are installing a four-foot-high, mile-long electric fence in early 2017. The barrier will include several strands of electric wire to shock predators into keeping their distance. It will be placed more strategically than two previous fences, which were not entirely effective, McQuilkin says. The first one was built after the coyotes had already caught wind of the nests; the second one dissolved in the lake’s briny water.

The effort to save California Gulls is just the latest crusade to protect the iconic lake and its spare, sweeping vistas. One of the oldest water bodies in North America, Mono’s decline began in 1941 when the Los Angeles Department of Water and Power began diverting the basin's feeder streams to supply a sprawling metropolis 330 miles south. By 1974, the city was funneling four-fifths of the natural flow into an aqueduct. Eight years later, the lake was reduced to its lowest level on record.

As the waters receded, salinity increased. Dust filled the air over the basin. But it was the plight of Mono Lake's birds that drew the most public outrage. Ornithologist David Gaines grew alarmed by the ecological changes caused by the reduced water levels. In 1978 he and a handful of fellow students formed the Mono Lake Committee, launching a passionate grassroots campaign. "Save Mono Lake" bumper stickers began appearing on cars throughout the West.

After more than a decade of public hearings and court battles, legal action by the National Audubon Society led to a 1994 public trust victory, limiting the amount of water Los Angeles could withdraw. "This lake would have been long dead without protection," McQuiklin says.

Water levels started to recover with the return of fresh stream water. But by 2008 they were again on a downhill slide, this time due to a state-wide drought. 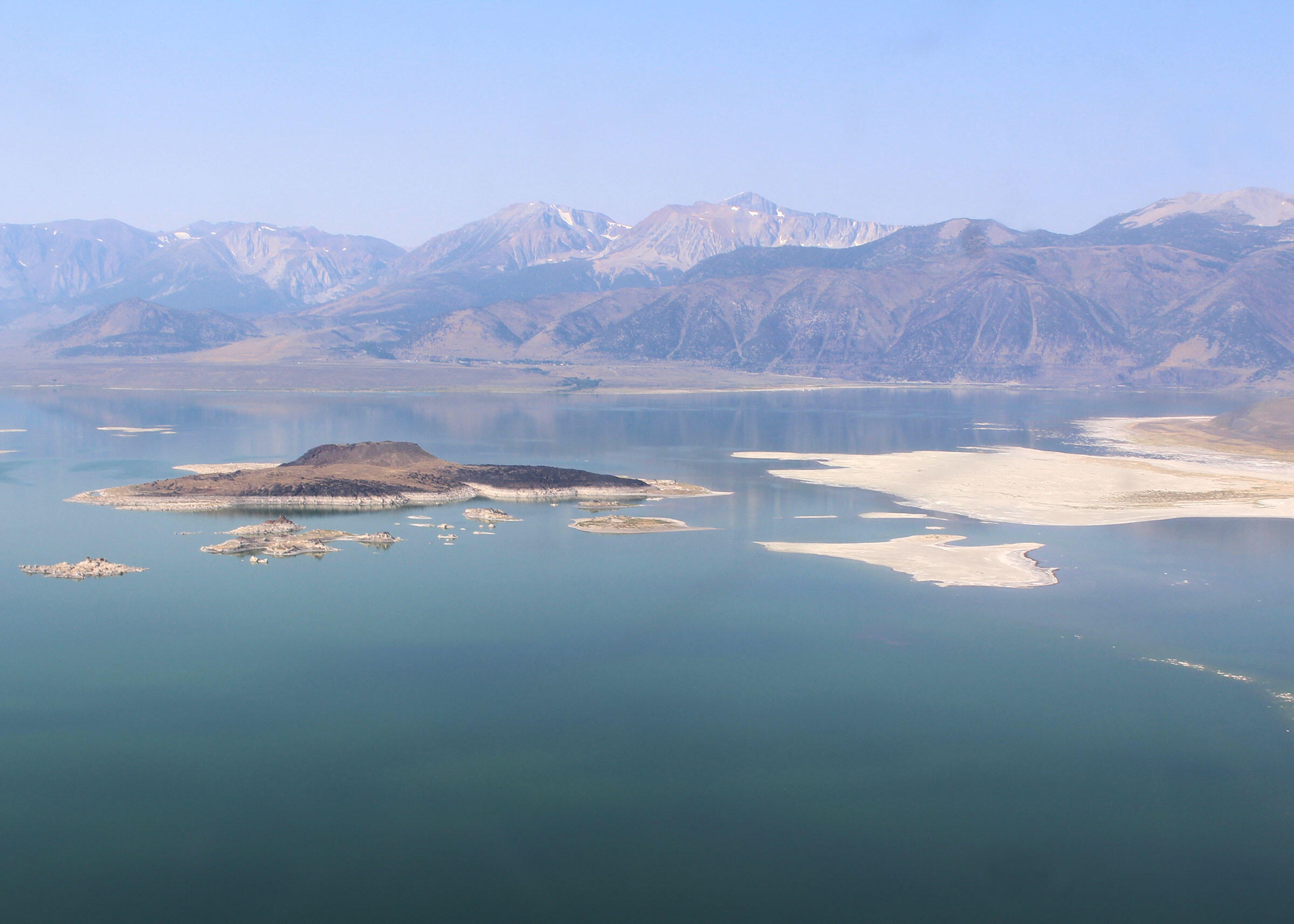 As current conditions worsen, scientists are monitoring salinity levels to see how they might affect the algae, brine shrimp, and alkali flies that make Mono Lake one of most productive ecosystems in the world. Any negative trends could ripple up the food chain and affect migratory birds, such as Eared Grebes and Wilson's Phalaropes. At the moment it doesn’t look like they’re in any danger, McQuilkin says.

But the gulls are. Even if the fence thwarts the coyotes, the basic predicament at Mono Lake isn’t predators eating prey: It’s the loss of water. The snow that began falling in late November has raised hopes, but temperatures are still historically high in the region, causing faster melt rates in the Sierra Nevada.

For McQuilkin, building the fence is something humans can do to protect a species. But after decades of grassroots action to save the lake, he’s planning for the worst and hoping for the best.