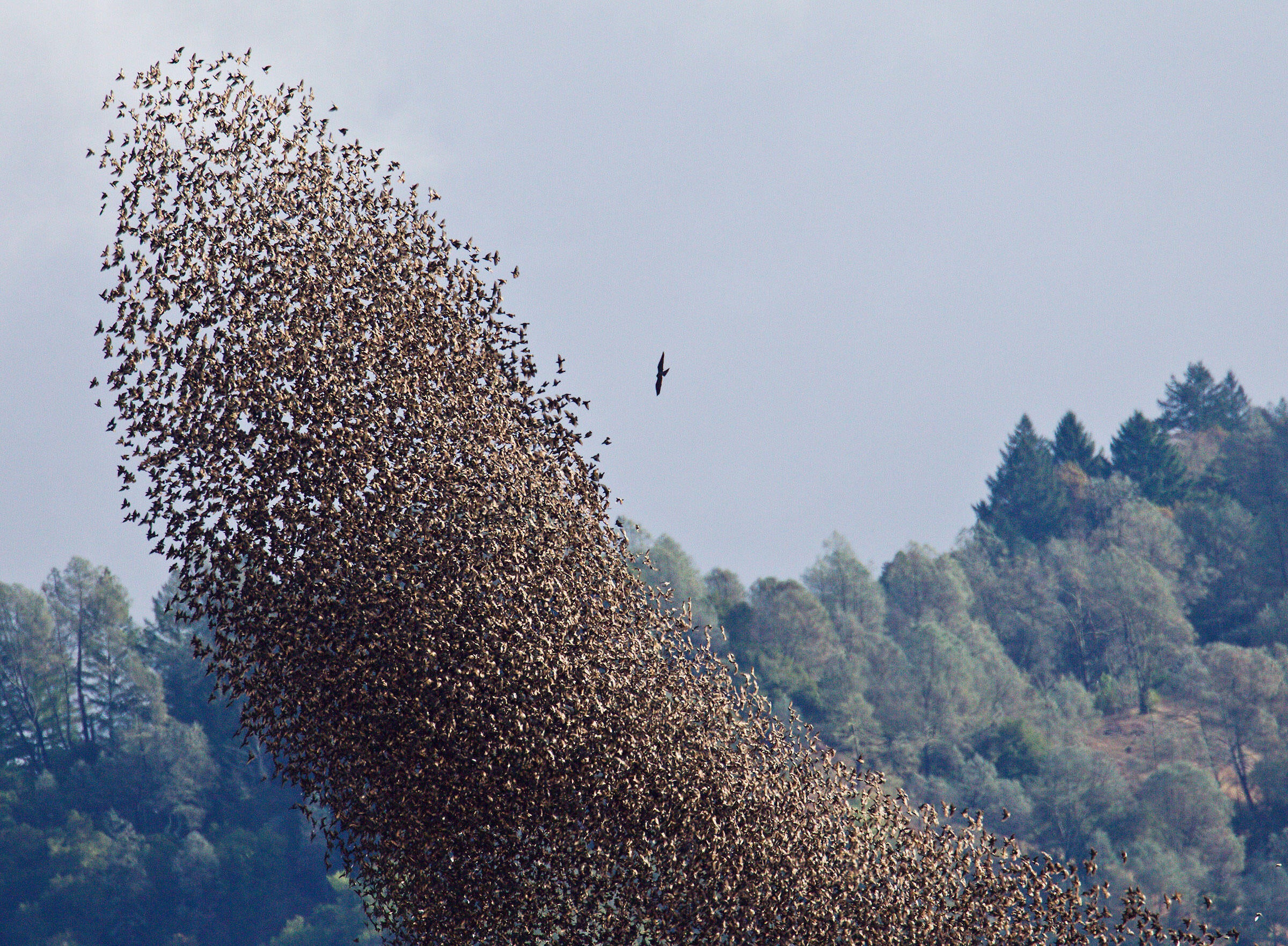 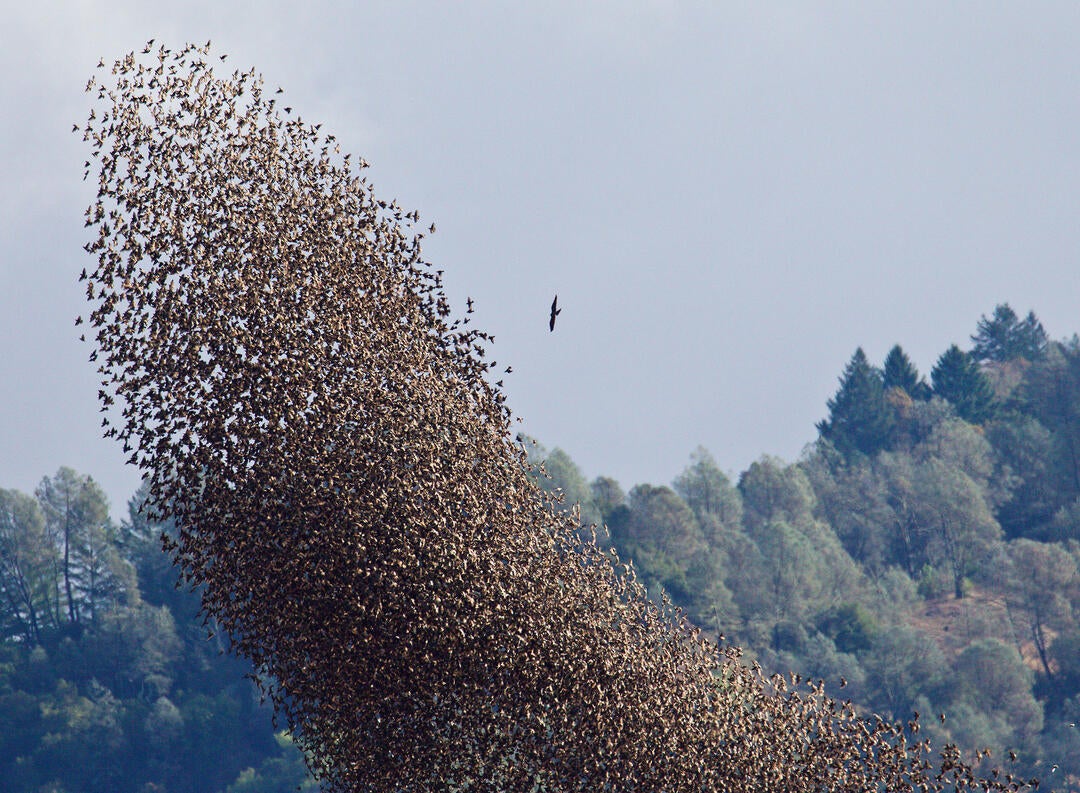 Starlings are easy to find. But capturing their twisted formations as they evade predators takes commitment and vision.

Every October the Central Valley’s vineyards, hilltops, and sun-streaked cumuli serve as a dreamy backdrop for starling murmurations. The flocks take the scenic route during migration, creeping southward as they savor the finest culinary options in the countryside. But even as they'd blot out fields and skies, Nick Dunlop wouldn't give them very much thought. Since high school, the part-time photographer has been solely focused on birds of prey—first in falconry, then out in nature.

To that end, about a decade ago, Dunlop found himself crouched in a marsh in northern California, waiting for a Peregrine Falcon to make a kill on camera. As he hid among the shorebirds he noticed a dark funnel twisting in the distance. After investigating further, he discovered that it was a pack of European Starlings being ambushed by a raptor. “It didn’t last long, and I wanted to see it again,” Dunlop says. “It was pretty wild.”

The lure of the starlings' sublime choreography—along with the challenge of actually photographing it—sent Dunlop on a chase around the Valley. He singled out locations where he could study and memorize the behavior of the prey, followed by the predators. But it took several more seasons and breakneck pursuits before Dunlop could get close enough to document the aerial attacks. Along the way, he beefed up his raptor knowledge by chatting with his biologist buddies and training himself to identify distant silhouettes. He learned that around the Valley, Peregrines were the most common aggressors, although sometimes Red-tailed Hawks, Cooper’s Hawks, and Prairie Falcons would join the melee. The hunters typically came in low and motored upwind, pushing the starlings up. The targets always stayed in formation to keep away from the assailants' talons: “It’s everybody for themselves” in pulling for the safest position, Dunlop says. They’d veer and weave to throw the predator of their tails, and more often than not, the raptors would give up.

Once he had a successful shoot under his belt, he was hooked. He would stake out dairy farms where starlings would roost (after asking permission from the landowners) during peak weeks in spring and fall and keep watch for circling falcons and hawks. “If you want to find the largest flocks, you have to find their food source,” Dunlop says. Farms usually have extra grain lying around, which attracts migrating birds and ultimately, raptors. Sometimes, he’d even get phone tips from the locals who knew about his odd ventures. Being a real-estate appraiser by day, he says, also helps with scouting out the best properties.

To capture the height of the action, Dunlop starts by picturing the position of the murmuration. While the raptor agitates the birds on the ground, he mentally maps out their course along the horizon and visualizes the scene he wants. Then he waits for them to rise. As soon as the first birds hit the air, he takes off on foot. The window only lasts for a minute or so, before the “megaflock” gets too far up to photograph with his high-speed Canon EOS-1D. Near misses are familiar to Dunlop; one time he tracked an assault deep into a canyon, only to see the cloud dissipate before he could get the shot.

It’s also important to consider the shape of each bird in play. “You need to make sure the falcon’s outline is prominent and doesn’t blend in with the flock,” Dunlop explains. “It’s better to wait for that moment and not push the shutter.” With the raptor orchestrating the formation, there’s no telling what the exact result will be. It's what pulls Dunlop back into the field time and time again. Every season is another chance to perfect the practice and capture new spectacles.

See more murmuration photos from Dunlop's book, “Chaos in the Sky,” below. And watch the action unfold in his short video. 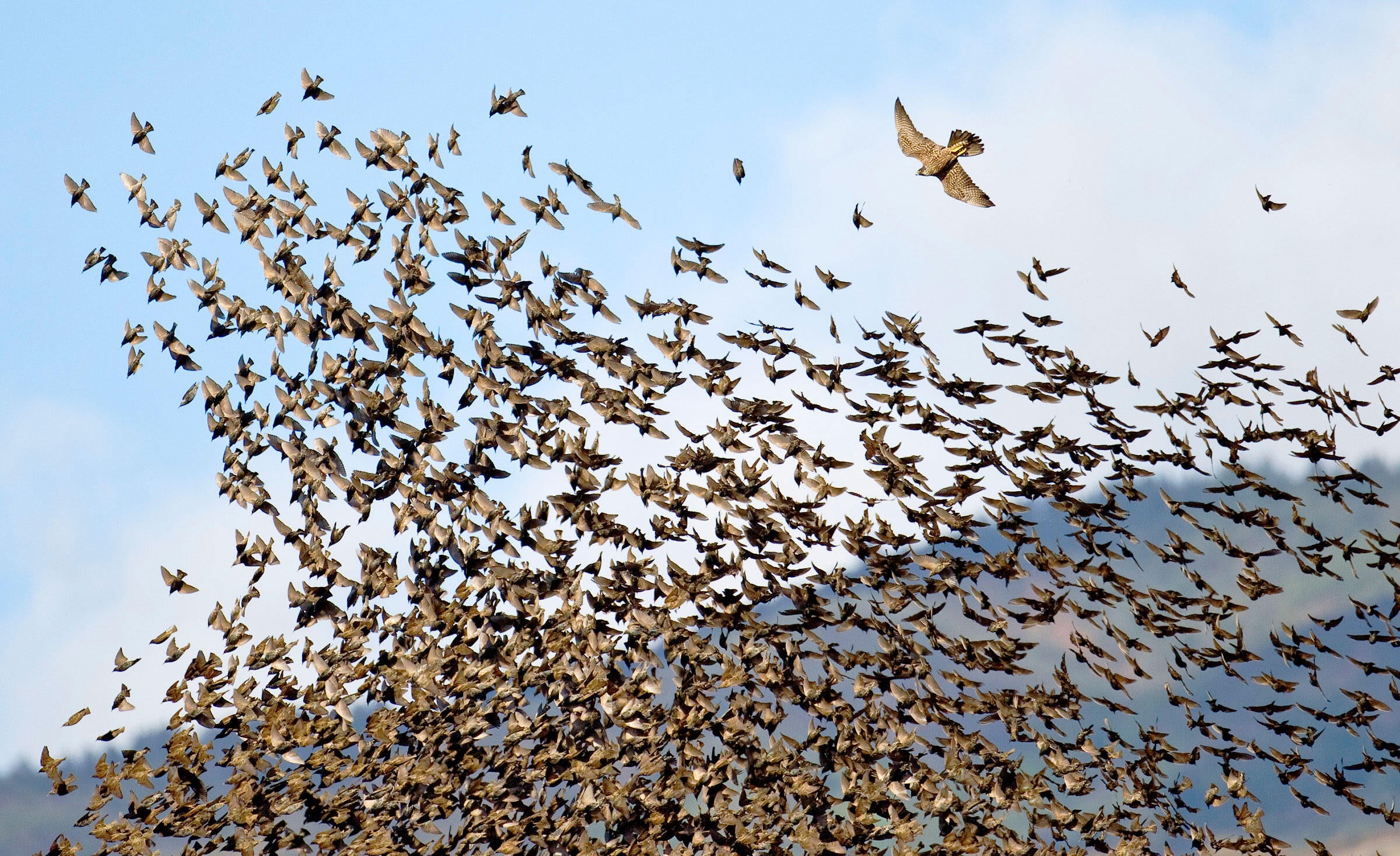 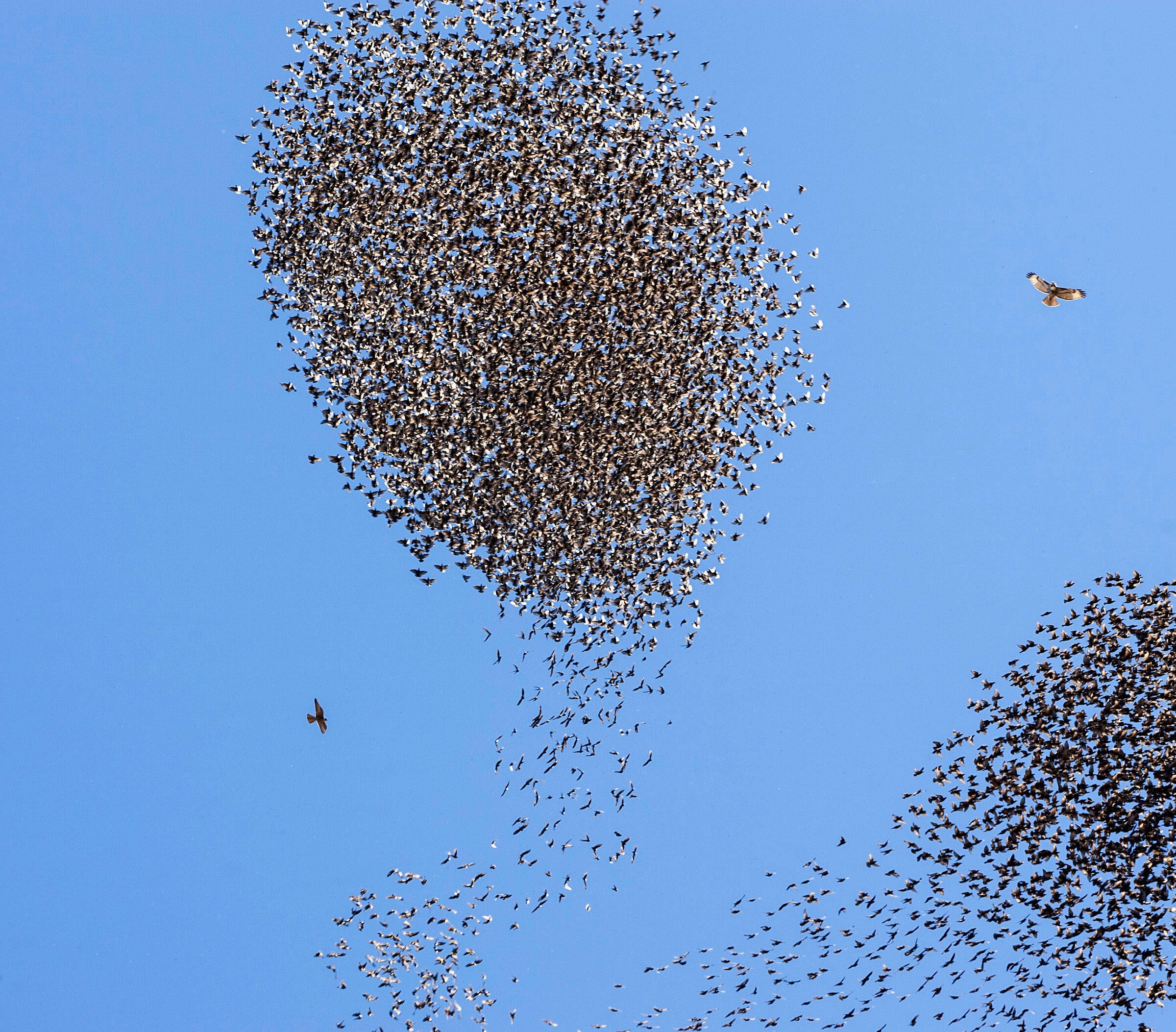 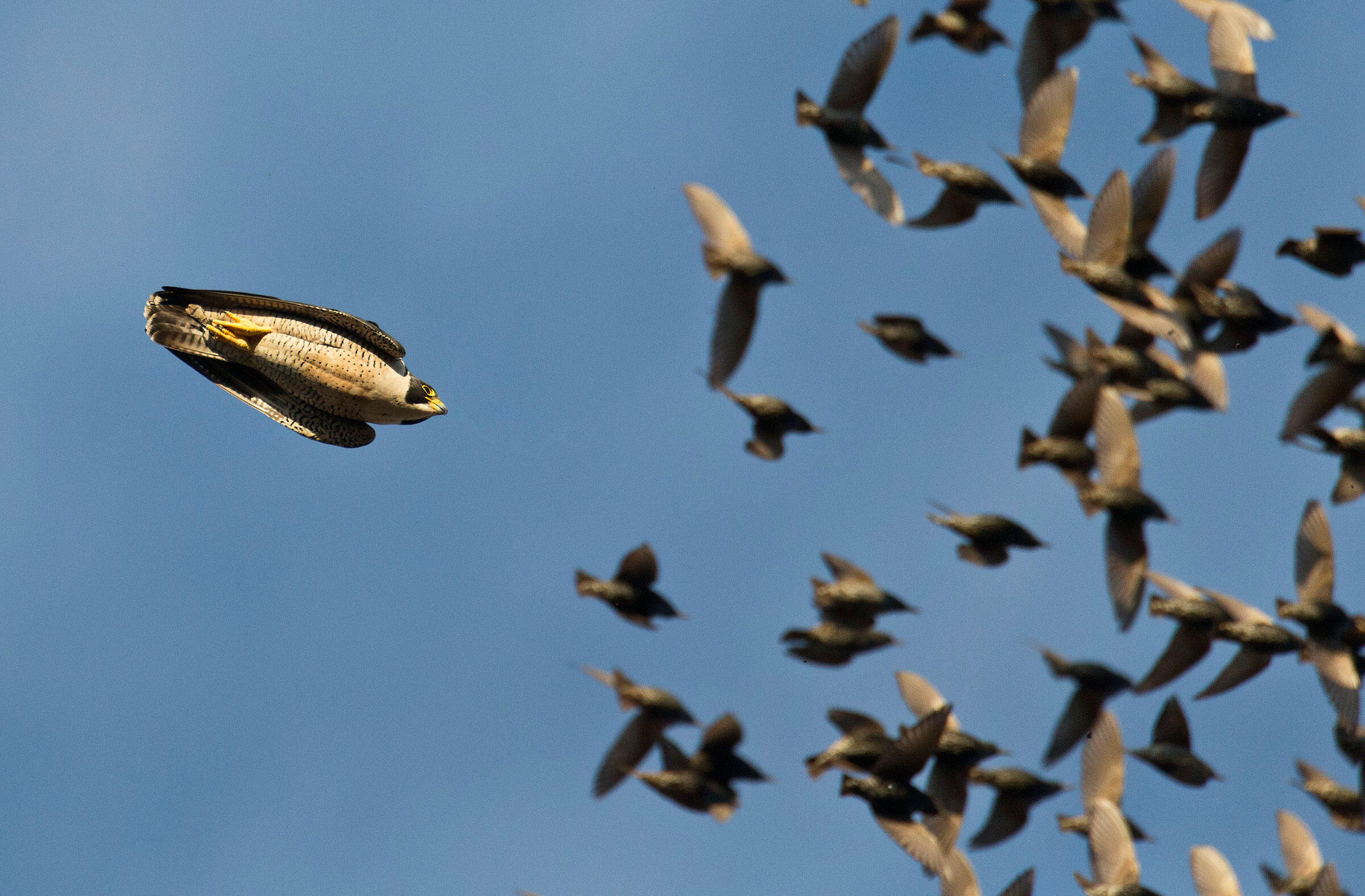 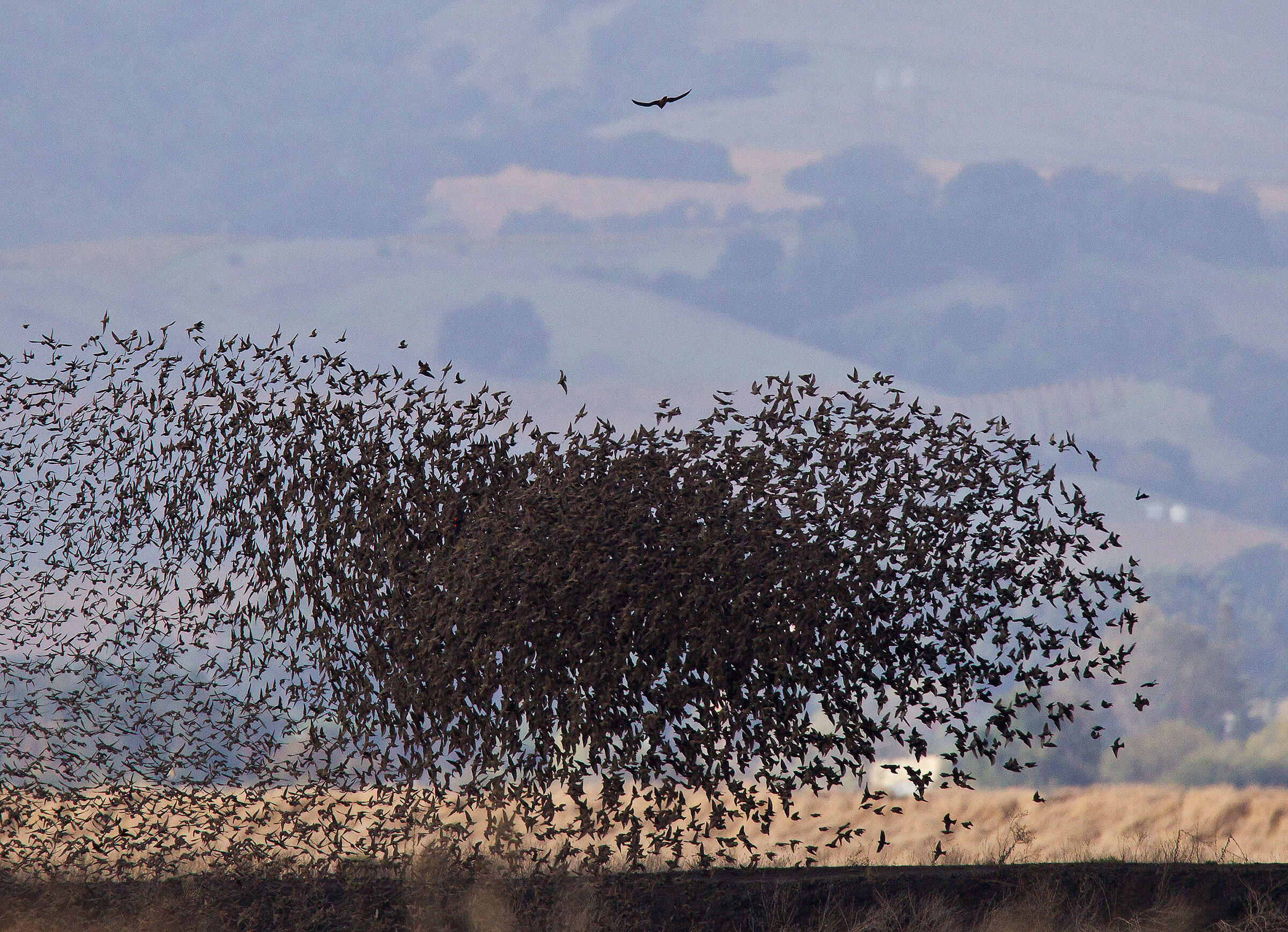 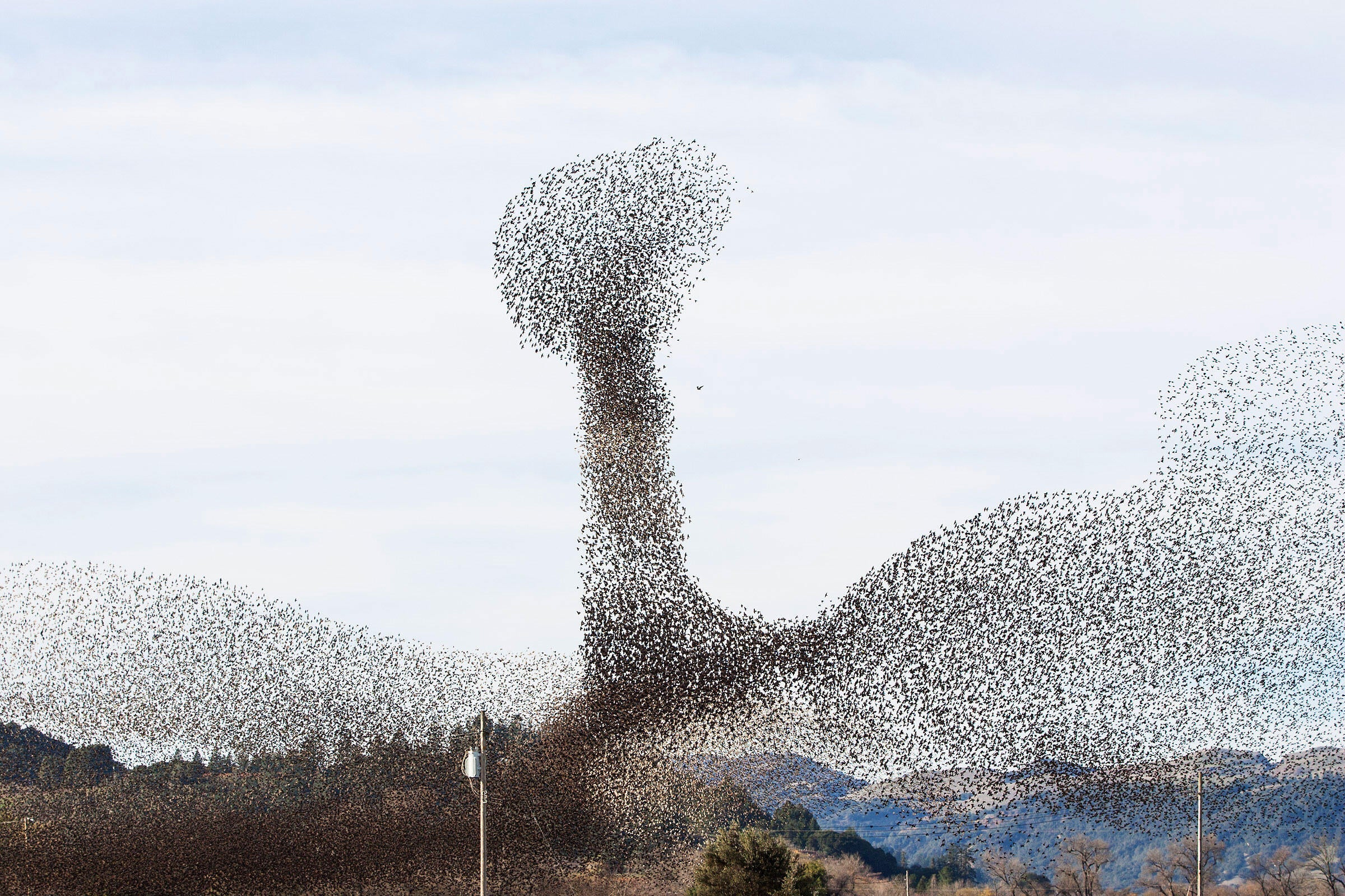 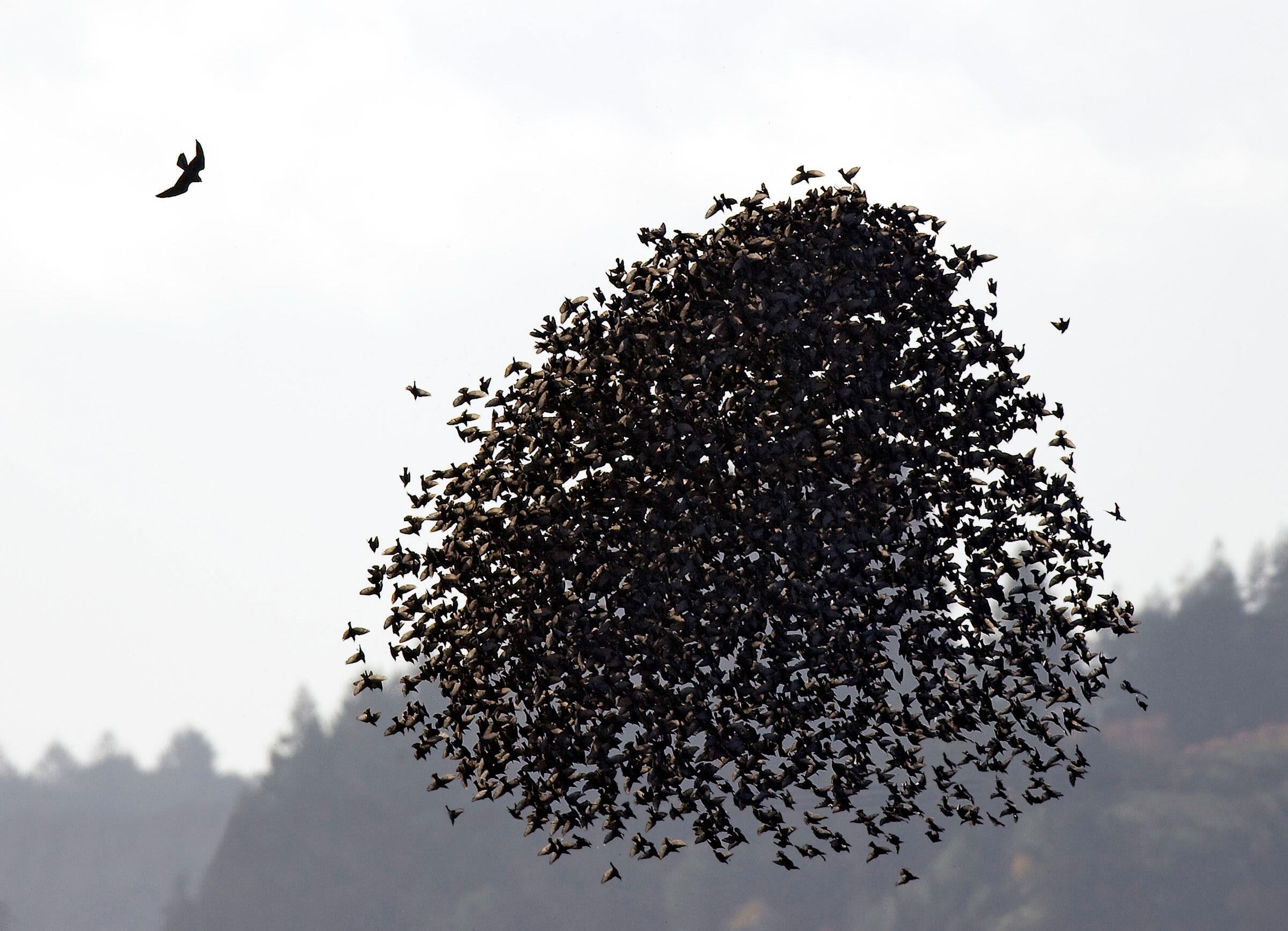 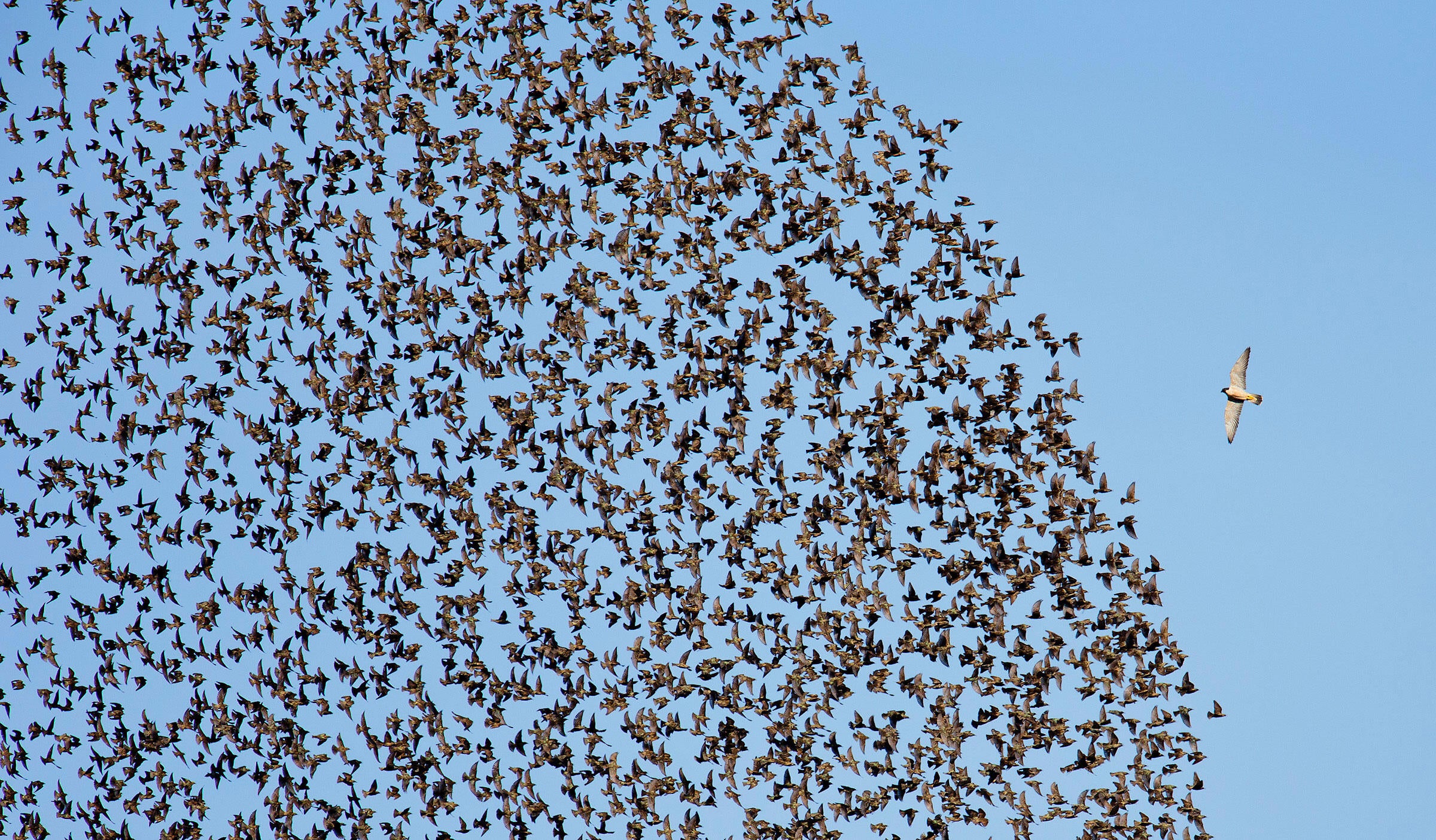 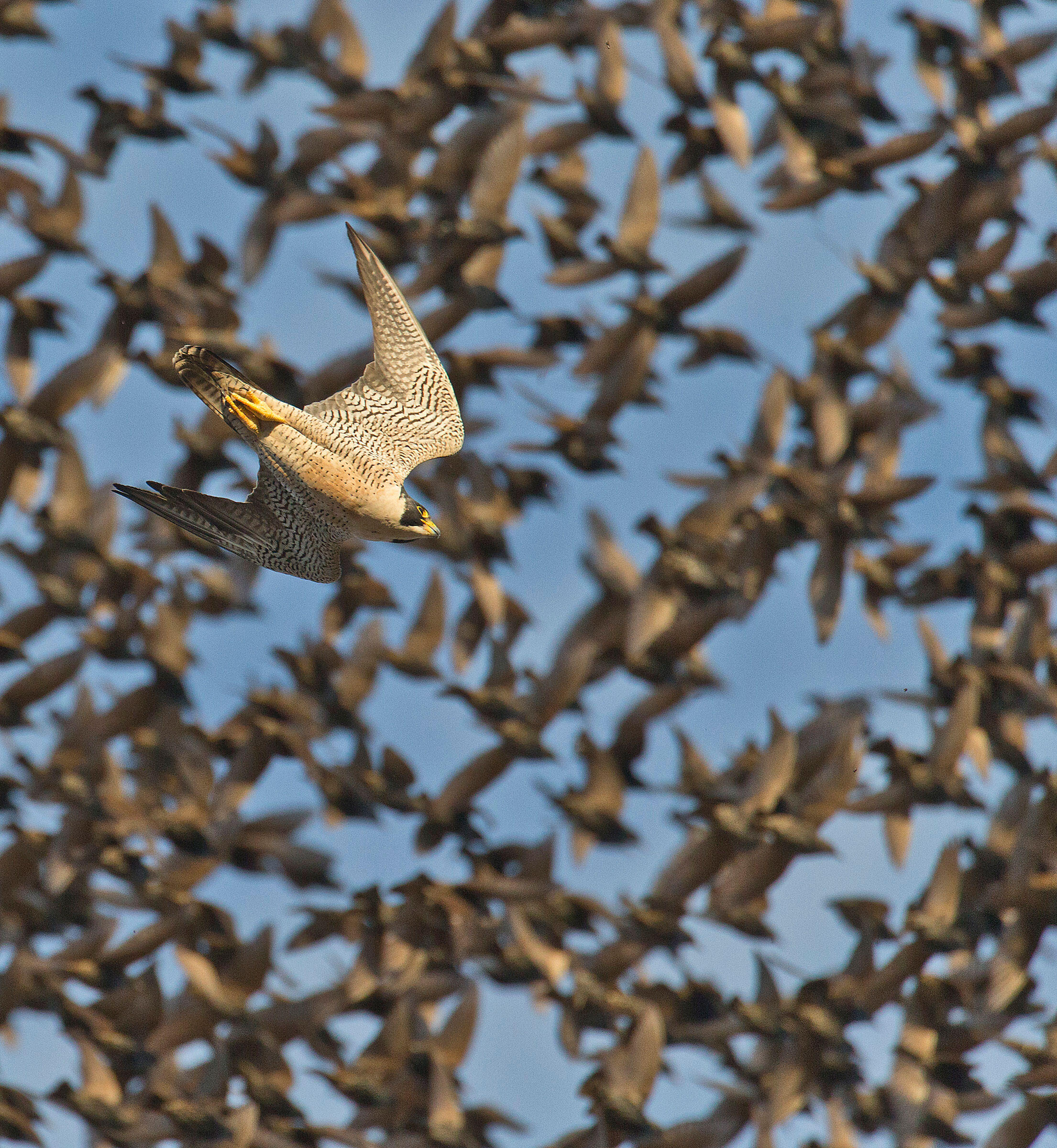 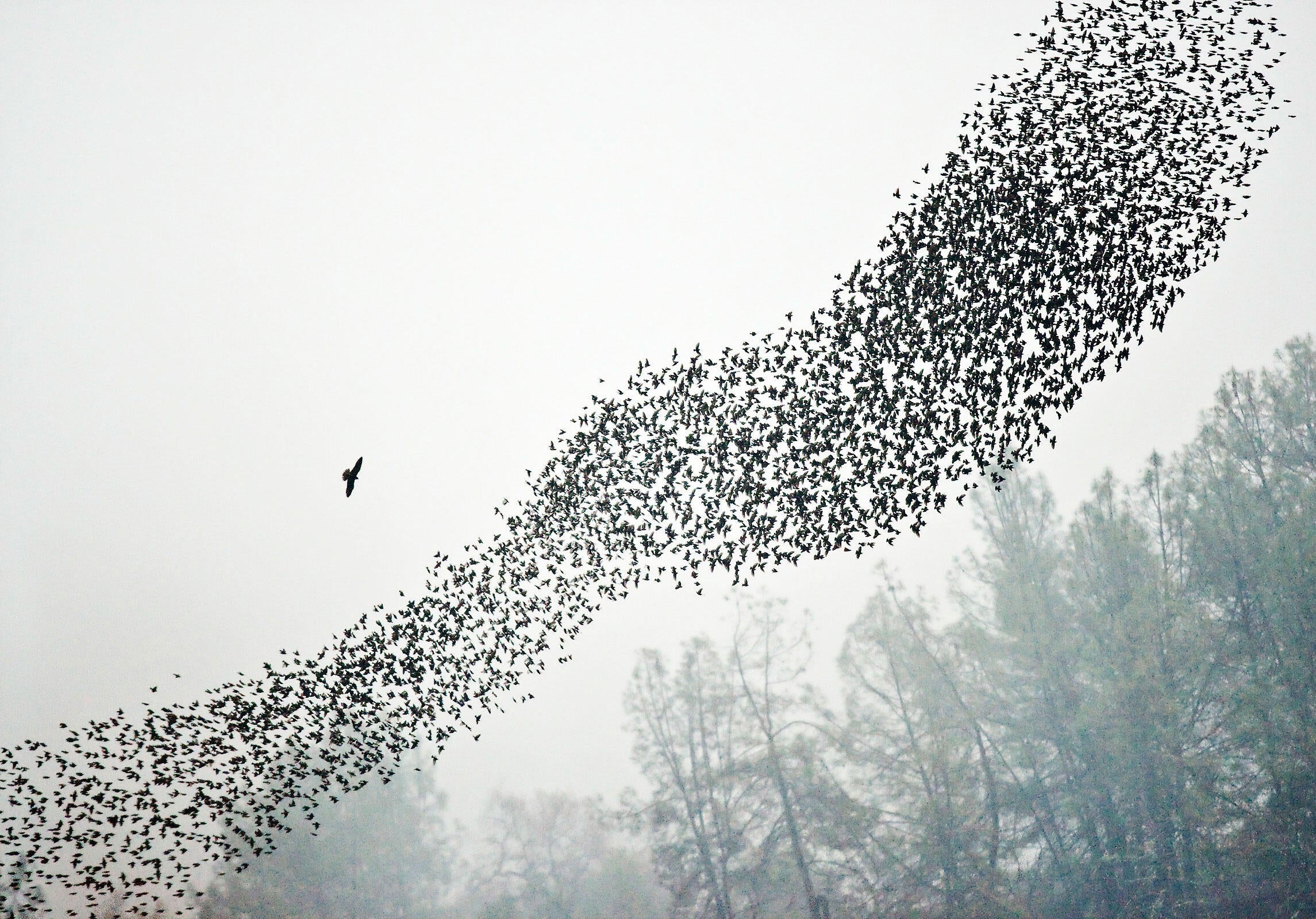 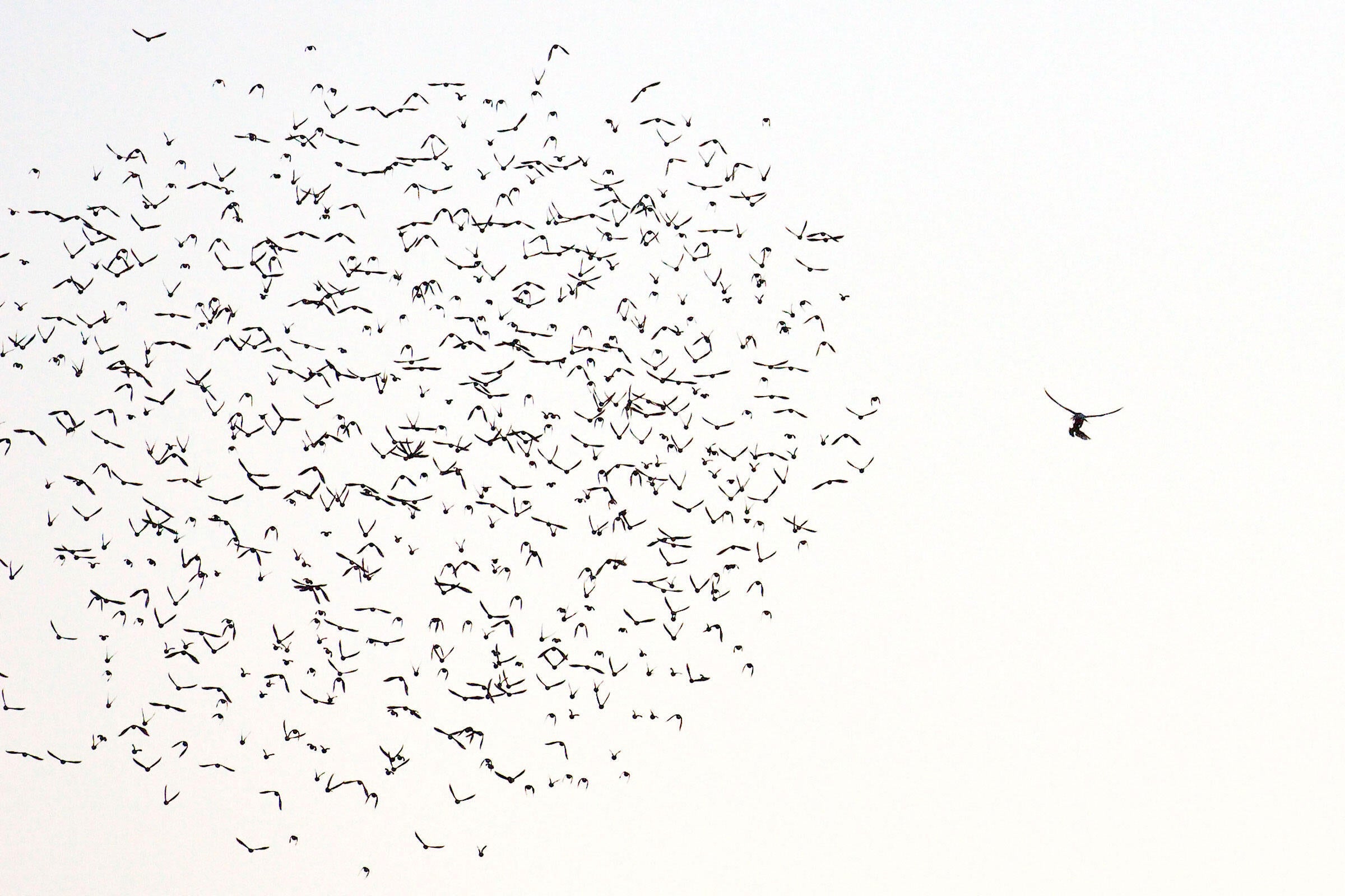 Correction: Dunlop does most of his photography in the Central Valley, not Napa Valley as previously stated.