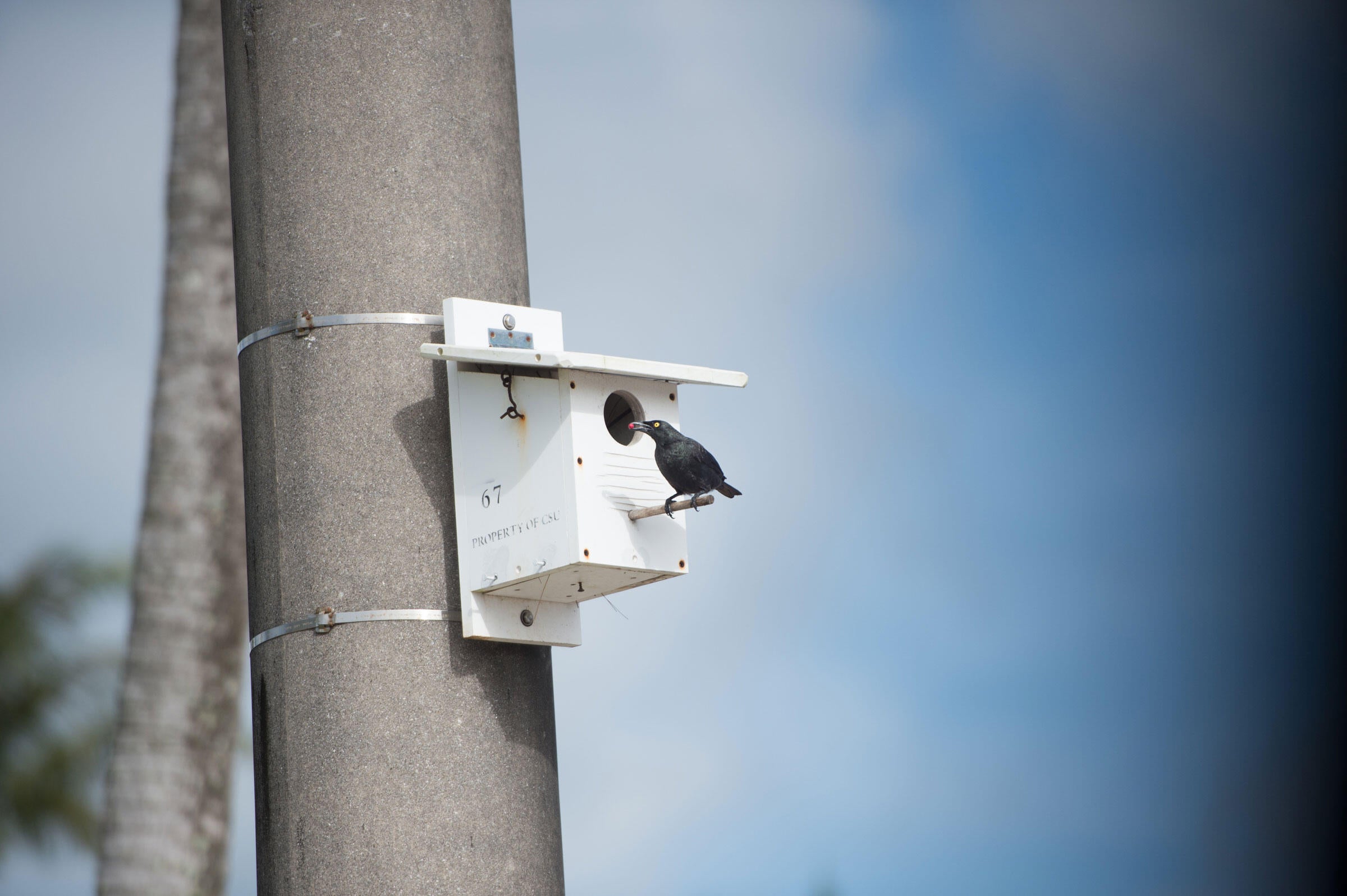 A Micronesian Starling perches at the entrance of a nest box on the Andersen Air Force Base in Guam. Once widespread on the island nation, the species now numbers in the hundreds. Their human-made dwellings are hung on smooth concrete poles to prevent brown tree snakes from climbing up and eating the nestlings. Photo: Nancy Borowick

Are Starlings the Key to Making Guam's Forests Sing Again?

Decades after the brown tree snake wiped out Guam’s birds, biologists have an ambitious plan to bring native species back to the stunning island.

The forests of Guam are eerily quiet. Ever since birds disappeared a few decades ago, only the hum of insects and rustling of leaves float on the humid air of this 210-square-mile island in the Western Pacific Ocean. If a bold avian reintroduction project is successful, however, the mountainous terrain might once again brim with song.

The story behind Guam’s near-silent forests is a classic in the annals of ecological invasion. It begins around 1949, when brown tree snakes hitched a ride on U.S. military craft from Manus Island in Papua New Guinea. The reptiles, which can grow up to eight feet long and have a native range from Australia to the nearby region of Melanesia, multiplied and ate their way through Guam’s avifauna. By the time biologists grasped the problem in the 1980s, snakes had rendered 13 of the island’s 22 breeding birds extinct in the wild, including six endemics. The 12 forest species were hit especially hard, with only the Island Swiftlet and Micronesian Starling still clinging to existence on the snake-free grounds of a U.S. Air Force base. Others, such as the Guam Rail and Guam Kingfisher, survive only through captive-breeding programs.

Iowa State University biologist Haldre Rogers and her team are working to resurrect some of those lost species—and in doing so, help rebuild the larger ecosystem. In the absence of birds, Guam’s karst limestone forests, which cover a third of the island, have changed ­significantly. The density of cobwebs can be up to 40 times greater on birdier isles, hinting that spiders—which compete with avian predators—now overrun the woods. Many plants, meanwhile, have declined. Seventy percent of tree species, including the ­berry-packed ­åplokhateng and åhgao, rely on birds to gorge on their fruits and spread the seeds far and wide. (Some are up to four times likelier to germinate after passing through a bird’s gut.) Rogers found that because of the snakes, the number of seedlings for two common species plummeted by as much as 92 percent, thinning once dense canopies.

By the time biologists grasped the problem, snakes had rendered 13 of the island‘s 22 breeding birds extinct in the wild.

Enter the Micronesian Starling. Known locally as Sali, it’s a glossy black bird with a yellow eye and a clear song. “It’s probably the most effective fruit disperser of the birds that used to be here,” Rogers says. “This means it’s the best candidate for restoring ecosystem function.”

Historically widespread, in 2016 fewer than 1,000 Sali survived on Guam. As cavity nesters, the birds are easy pickings for the tree-bound snakes. So the first step in bolstering their numbers was to protect the starlings until chicks fledge. Rogers’s collaborators hit upon a simple solution: They hung PVC nest boxes on poles too slippery for the reptiles to scale. Since they installed the contraptions around Andersen Air Force Base in 2015, 589 young have fledged.

The next stage is to build new boxes—with help from Guamanian students in shop classes—­outside of the friendly confines of the base. That’s at least a year off and a considerable challenge, given that 2 million brown tree snakes still slither around the island. The population has been stable since the 1990s, despite localized eradication efforts that include airdropping mice laced with acetaminophen, which is toxic to reptiles.

“Snakes are definitely still a concern,” says Rogers. But she is not content to wait while communities of trees wither without their birds. Even if a fraction of the young starlings make it to adulthood, it will help stem, and maybe even reverse, the decline of swaths of forest. “It’s a small step,” Rogers says. “But an important one to produce a functioning, more diverse ecosystem.”

Her hope is that ultimately the lessons her team learns from the starlings can pave the way to reintroduce the Guam Kingfisher, another cavity nester that’s being raised in the Philadelphia Zoo and other U.S.-based institutions. Like the Sali, they’re waiting in the wings, ready to come back home.

Correction: The chewed-up fruits in photo no. 5 were originally misidentified as being left behind by fruit bats. Some captions were also edited to clarify that the nest boxes were designed and installed by a separate team from Colorado State University.

This story originally ran in the Winter 2018 issue as “Island of Silence.” To receive our print magazine, become a member by making a donation today.