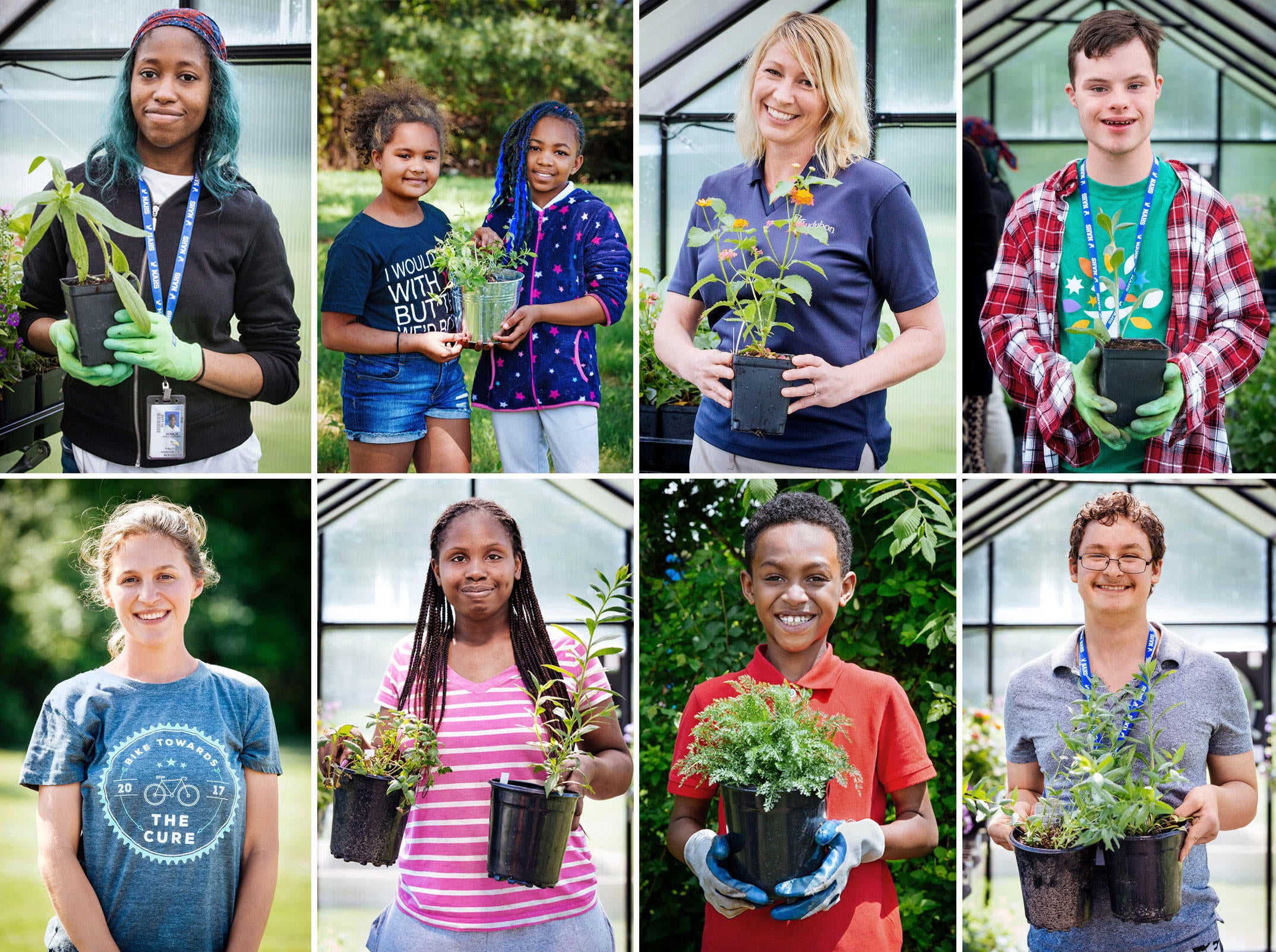 Thanks to some seeds, soil, and a lot of dedication, students are learning about science, connecting with nature, and greening the city of Norristown.

The half-dozen fourth ­graders are supposed to be hard at work weeding garden beds with their science class at Gotwals Elementary School in Norristown, Pennsylvania. But for a moment on this spring day, the plants will have to wait. The kids have made a discovery.

A garter snake has scaled an overgrown weed to catch a few rays. “Doesn’t it look like a branch?” an educator asks. “Nature lets it hide in plain sight.”

The students huddle for a closer look at the harmless reptile as the conversation turns to native plants. Across the playground, other students wielding kid-size binoculars scour the skies for birds. A third gaggle, armed with gloves and garbage bags, train their eyes on the ground to collect litter.

Buzzing around the scene is Carrie Barron, manager of the nearby John James Audubon Center at Mill Grove. A tall, genial woman with a perpetual smile, Barron exudes roll-up-your-sleeves enthusiasm. The kids watch attentively as she demonstrates how to coax goldenrods and bleeding hearts from their pots and pat them gently into the soil.

This is what science class often looks like at Gotwals: a blend of exploratory learning, physical work, and lessons in native-plant gardens that students sow and tend. What began as an effort to revitalize science teaching and promote environmental awareness at one school has become a fully integrated conservation-education partnership across Norristown, population 34,000.

Over the past seven years, Barron and the center have introduced native-plants programming to six elementary schools and two high schools in the Norristown Area School District, providing a gateway into the natural world that can’t be replicated inside classrooms. Special-needs and at-risk students cultivate plants in Audubon-sponsored greenhouses at their schools, gaining skills that may help them find future employment. Hispanic community groups in town offer after-school programming in their own gardens. And students practice entrepreneurship with sales of greenhouse-grown native species, which help to turn the city into a thriving habitat for insects, birds, and other wildlife. What makes the effort more remarkable, and vital, is that the town isn’t an affluent enclave. One-third of students come from economically disadvantaged households, one-tenth are English-language learners, and nearly one-fifth have special needs.

All this, jumpstarted and generated by the passion of one woman who rallied a community around native plants.

It all began with a fateful science-fair competition. Barron was a fresh hire as the John James Audubon Center’s first education staffer when she was invited to judge the science fair at Norristown’s Marshall Street Elementary School in 2011. It wasn’t the former middle- and high-school science teacher’s first fair, though she’d never seen such low-quality work. One student investigated which chewing gum tasted best, exhibiting the results by gluing wrappers to a poster. “It was heartbreaking to think that was a science project,” Barron recalls. “It told me that students didn’t have the tools or the knowledge to understand what scientific inquiry is and how to utilize it to solve real-world problems.”

She resolved to help improve science education in Norristown, and looking out on the school’s central courtyard, disused and overgrown with weeds, inspiration struck. She’d previously seen the power of getting kids out of traditional classrooms and exciting their curiosity. Research supports her observation: A 2015 study, for instance, concluded that physical engagement with science content activates students’ sensory and motor systems and enhances their learning and recall.

Barron approached the principal with a proposition. In addition to helping kids develop stronger science-fair projects, she’d transform the courtyard into an outdoor-learning space populated with native plants provided by the center. The principal jumped at the offer, with an additional ask: that Barron also develop lessons in the space for fourth graders, who take a standardized test in science at the end of the school year. The teachers, she explained, could use the support.

The following fall, under Barron’s guidance, students and teachers from each of Marshall Street’s four fourth-grade classes designed and planted gardens. Then the plants were put to work: One day per month, a center educator taught a science lesson in the garden, focusing on seasonal changes and other garden activity, such as visits by foraging and pollinating birds. Teachers brought classes outside independently, too, to take advantage of the rare opportunity to experiment with experiential teaching.

To Barron’s delight, at the next science fair, projects followed the scientific method: hypothesis, control, experiment, conclusion. What’s more, she saw that many children drew from their work in the gardens, presenting on how plant cuttings fared when placed in different liquids, for example.

Student journals at the end of that first year were another encouraging indicator. “We asked the kids what they thought of the program,” Barron says, “and they’d write, ‘I didn’t even think about birds before,’ or ‘I didn’t know about native plants,’ or ‘I used to let the water run while I was brushing my teeth and now I shut it off.’” Over the next few years, she hired more staff and extended the curriculum to fourth graders in all six of the district’s elementary schools.

Barron approached the principal with a proposition: She’d transform the courtyard into an outdoor-learning space populated with native plants.

“Observation, making connections—that’s what learning is about,” says Janet Samuels, who retired as district superintendent this past summer. “[The curriculum] is not just learning in a classroom, and that makes an incredible difference.”

Before long, Barron realized she needed ever more plants to fill existing and planned gardens. Students, she thought, might be the answer. She brainstormed with Samuels about what they’d need to begin a propagation project—a small greenhouse, equipment, seeds, and soil—and which students would benefit most. 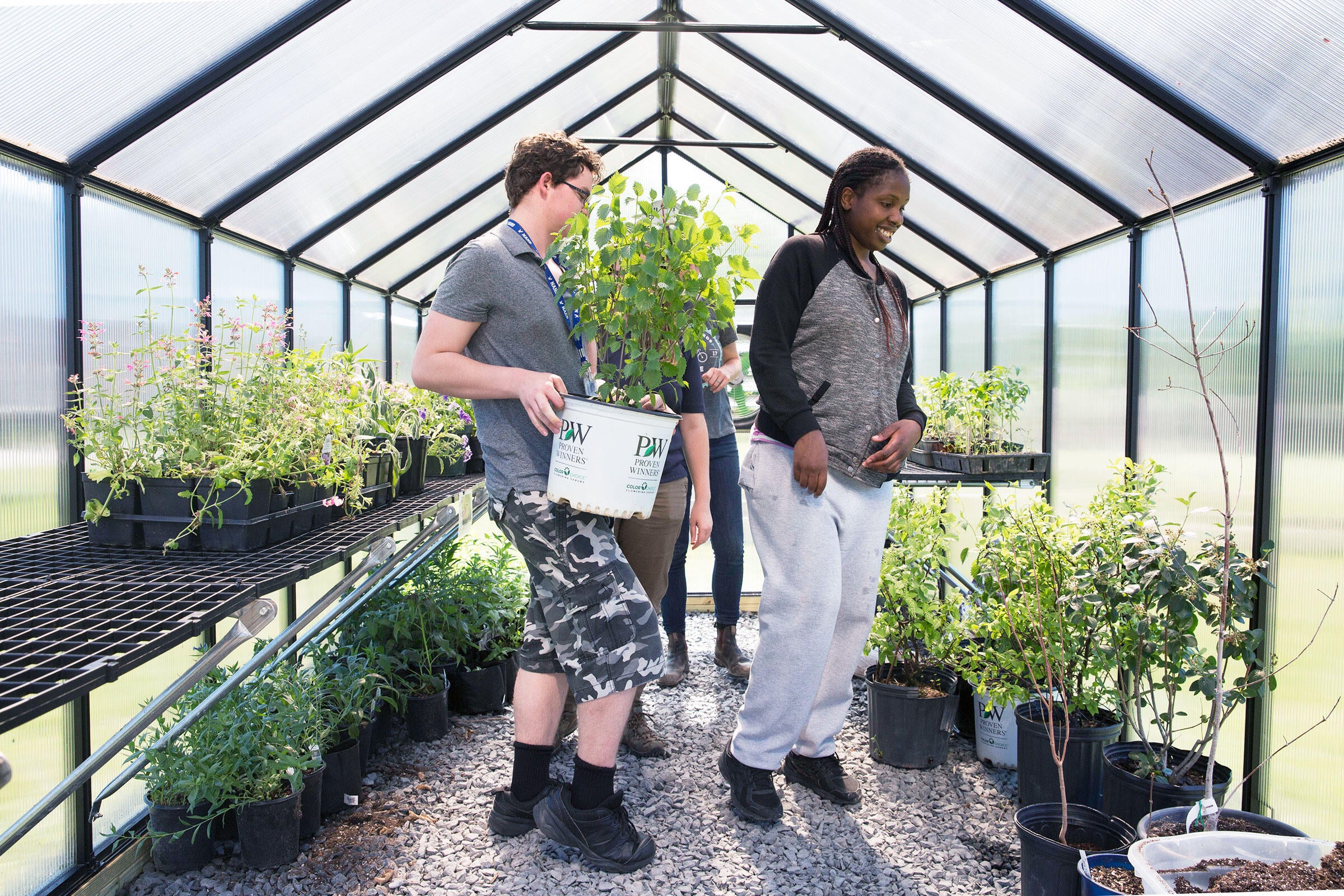 They decided that special-needs students in Norristown Area High School’s Job Skills classes would be a great fit. Not only might the experience help them secure employment at a nursery or landscaping business, but research also shows that hands-on activities help special-needs students connect with their peers and improve science grades. The district, in partnership with the John James Audubon Center, would supply a portion of the plants required each season, keeping costs down while introducing another facet of horticulture into Norristown science classes.

Now students in the Job Skills program work in the greenhouse each week, learning to raise young plants. On one overcast Wednesday morning in early summer, the teens divided and repotted black-eyed Susans in the glass-walled structure. “I think plants are peaceful,” says Semaja Mikell-Counsel, a sophomore, who accessorized her bright blue hair with neon-green garden gloves. “We take care of them and make sure they have food, water, and sun.”

Plants that Mikell-Counsel and her cohort tended have since spread throughout the city. Some have been transplanted to raised beds adjoining the greenhouse and other schoolyards; others adorn private gardens; and still more, planted in collaboration with the one-year-old government program Keep Norristown Beautiful, bloom along the banks of the Schuylkill, where they curtail erosion along the city’s Riverfront Park.

One of the school’s most striking features is a rustic greenhouse whose potting tables and planters went unused for years. When principal Carla Queenan heard about the greenhouse being erected at Norristown Area High School across town, she reached out to Barron with a vision of her own: to revamp Roosevelt’s greenhouse into a sanctuary for students to learn and build skills. “Teenagers are so into tech,” Queenan says. “I want them to be able to put that aside and focus on taking care of something, seeing it grow, and being responsible for it—to connect with something besides a screen.” 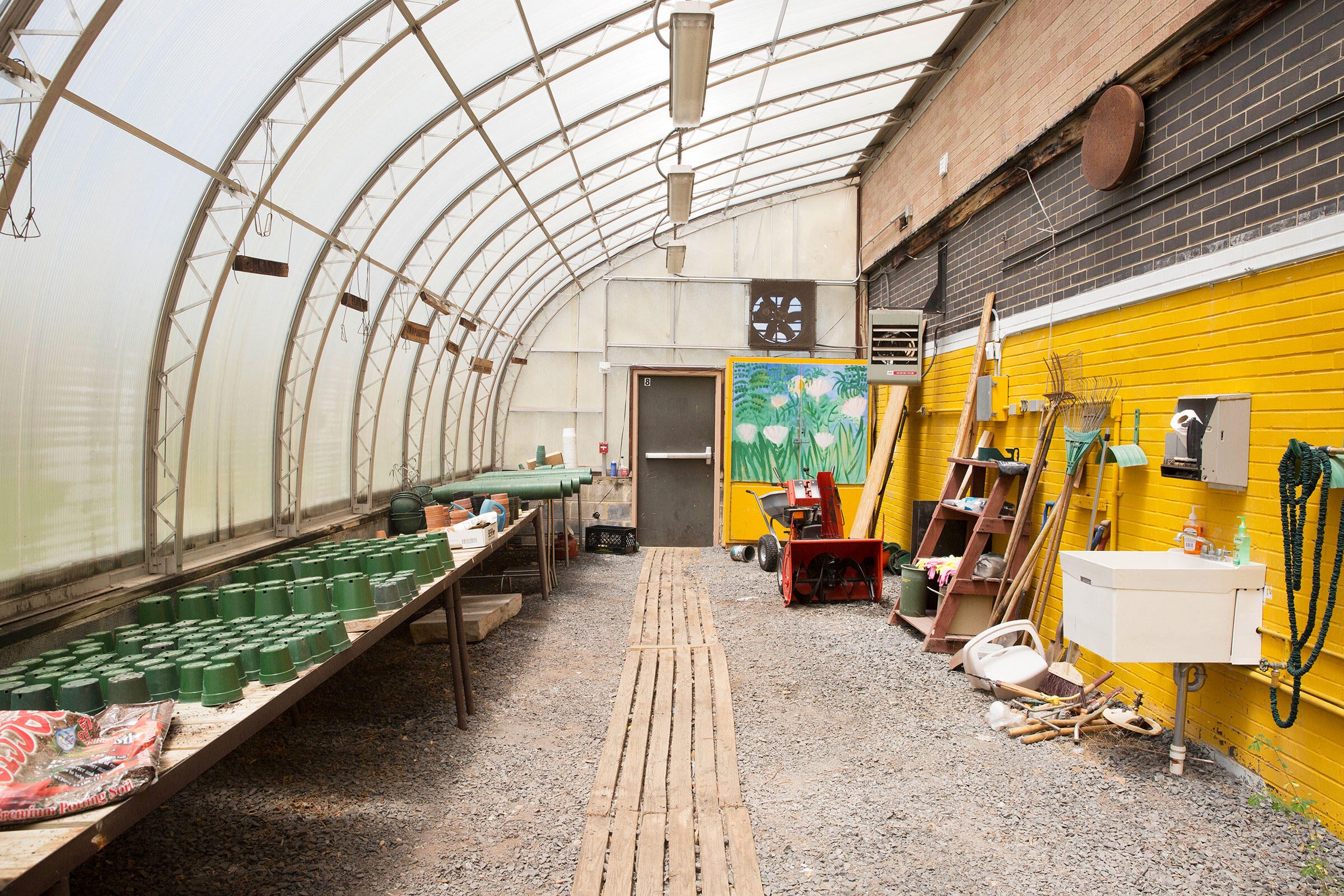 The greenhouse at the Roosevelt Alternative School needed a fresh coat of paint, among other things. Local grants helped fund an overhaul, and by this spring the structure was ready for plantings again. Photo: Rachel Wisniewski

With Barron’s help, that vision is becoming a reality. A $9,000 grant to Audubon from Pennsylvania American Water covered the installation of a new floor and sturdy tables this summer. CCATE student artists painted a colorful mural on one wall, and this fall the raised beds that students constructed and planted sprouted goldenrod, purple coneflower, and other species that support pollinators. When greenhouse renovations are completed this winter, students will cultivate and then transplant 1,000 native plants along the Schuylkill River and nearby Stony Creek.

On a brisk, sunny Saturday in October, the inaugural cohort of Roosevelt’s horticultural program held a plant sale at the greenhouse. (The program began with eight students; next semester, it will accept 20.) Families stopped by to shop and support their teenagers’ work, and dozens of community members picked out specimens for fall planting. Barron was also on hand, introducing customers to Oscar, a one-eyed Eastern Screech-Owl who is one of the Audubon center’s educational birds.

While Barron prefers to focus on the kids, her hard work hasn’t gone unnoticed. In April the Pennsylvania Association of Environmental Educators honored the John James Audubon Center at Mill Grove with an Outstanding Environmental Education Program award. “Ms. Barron is the epitome of an educator,” says Samuels, who nominated the program. “She’s passionate about science, she’s passionate about the work she does, and you see that multiplied.” 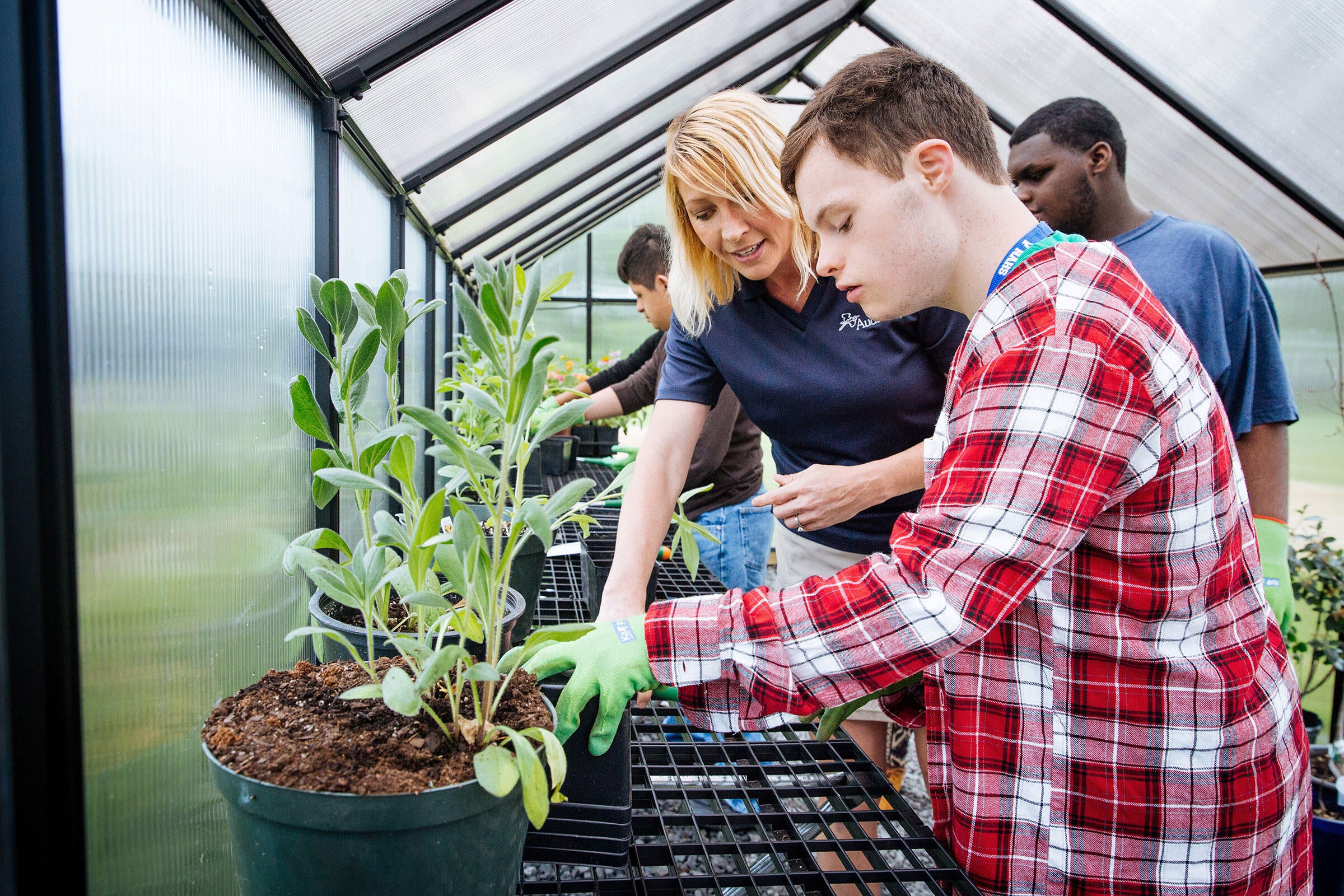 Barron helps Mahon re-pot plants at Norristown Area High School. Mahon is part of the job skills program, which has incorporated the greenhouse into its lesson plans. Photo: Rachel Wisniewski

Barron doesn’t want her impact to stop at Norristown. An online toolkit she’s created for Audubon state offices, centers, and chapters includes everything they need—lesson plans, grant applications, presentations—to start similar collaborations in their communities. Closer to home, she’s working with the Valley Forge and Wyncote Audubon chapters to expand the pilot to schools elsewhere in Pennsylvania, including Philadelphia. “Laying the groundwork for programs like this to be replicated is the biggest accomplishment,” she says, “and all the success of the kids learning and being engaged and creating habitats for birds is what drives me.”

Roosevelt senior Ta’Nya Webb can be counted among those successes. Her grandmother is a gardener, and now the two bond over what Webb discovers in the greenhouse.

“I like learning different things about flowers and plants—like, we’ve never seen this type of bird before, but because we planted this type of flower, it’s going to come,” she says. “We’re in school to do schoolwork, but then we’re having fun on the side with planting and gardening. We’re learning more about nature and experiencing more.”

All it takes is a little soil, water, sun, seeds, and a whole lot of dedication.

This story originally ran in the Winter 2018 issue as “Norristown in Bloom.” To receive our print magazine, become a member by making a donation today.