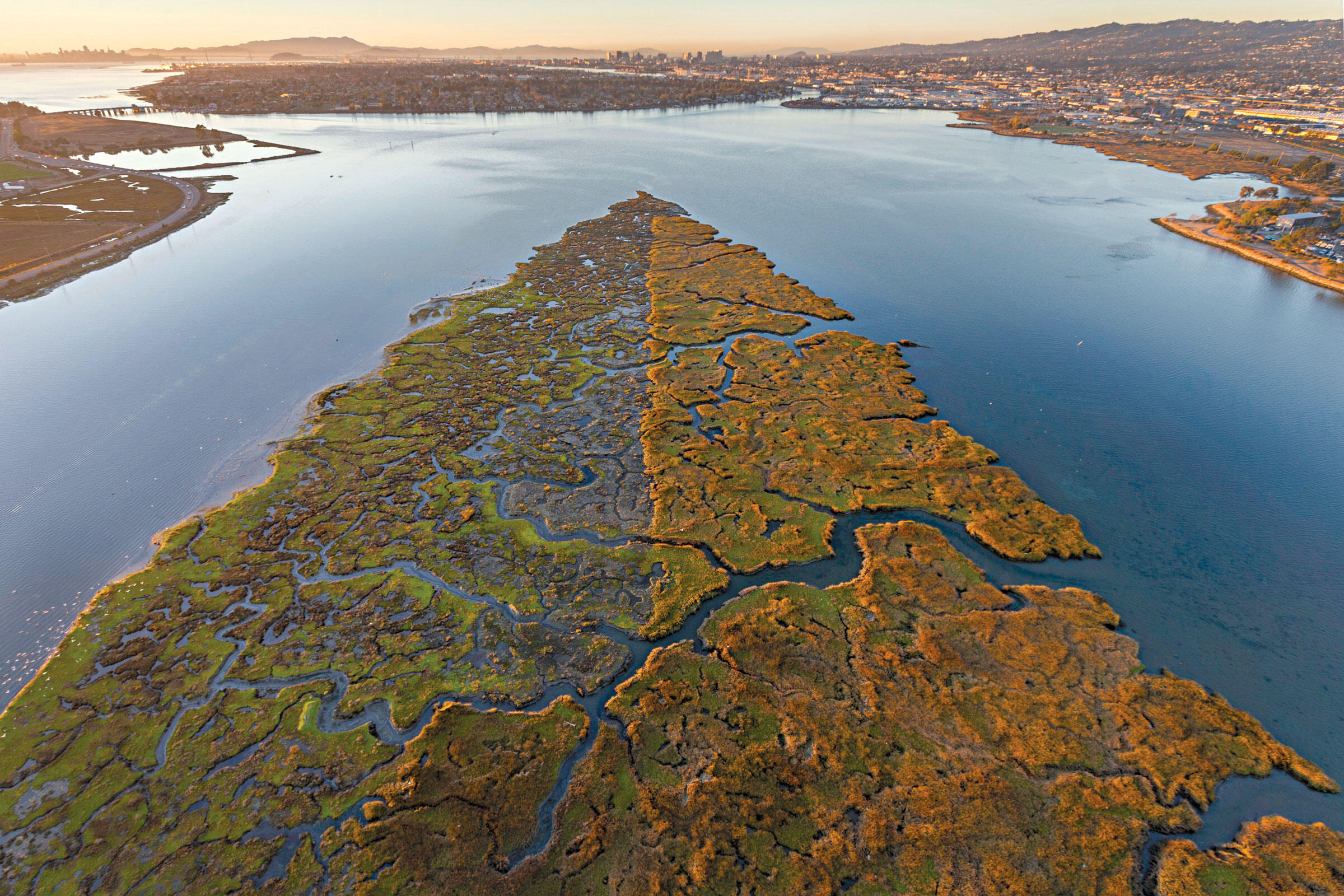 These U.S. Cities Are Proactively Planning for Climate Change

Guided by science, coastal hubs like the Bay Area are building in resiliency before disaster ensues.

When Oakland, California, loses two professional sports teams in the next few years, it will gain prime waterfront real estate. The stadiums for the Oakland Raiders and Golden State Warriors will be razed, creating space for thousands of affordable new homes. According to climate models, however, that housing might not last much longer than its athletic forebears: The bay around the neighborhoods is prone to as much as two feet of sea-level rise by 2050.

The good people of Oakland aren’t about to let that opportunity wash away. They’ve pressed their government to confront climate change before it wreaks havoc on the city’s 19 miles of shoreline. The mayor and council have responded with action: a road map that melds natural defenses with green infrastructure, and a pledge to update it as projections change over time.

Oakland isn’t the only populace locked in the battle against global warming. Two months ago the Intergovernmental Panel on Climate Change (IPCC) projected that, at the current level of fossil-­fuel consumption, the world could see a rise of up to 2.7 degrees Fahrenheit in the next few decades. Higher temperatures, it noted, mean more extreme disasters—a narrative that’s already playing out on U.S. coasts. As storms, wildfires, mudslides, and erosion plague communities East and West, a number of cities are preparing for the worst. “Some are all over this,” says Katharine Jacobs, director of the Center for Climate Adaptation Science and Solutions at the University of Arizona. Places that aren’t, such as North Carolina, have suffered. In 2012 legislators there banned agencies from applying sea-level rise data to policies. Two weeks after Hurricane Florence, neighborhoods in the southern part of the state remained underwater. Similarly, Houston, Texas, saw catastrophic flooding following Hurricane Harvey last fall.

Some governments have taken those disasters as a wakeup call. In October, North Carolina Governor Roy Cooper cited the need for investing in natural infrastructure. “Our future success will depend on the measures we take now,” he wrote in a 74-page Florence recovery plan. Meanwhile, New York City is five years into its $20 billion climate-resilience plan, which it released on the heels of Superstorm Sandy. “People certainly don’t want to experience another Sandy,” says Jainey Bavishi, a senior city official. “That’s an important motivator.”

New York’s strategy incorporates local climate models to set guidelines for construction and building design. Finding that data presented a challenge, Bavishi says. To map out flood-prone areas, the city had to assemble its own panel of climate experts to draw customized projections and solutions to match. In general, forecasts for sea-level rise can vary based on global pollution rates, the state of polar ice sheets, and land conditions. So while there are “reasonably good estimates” for how quickly seas will rise until 2050, beyond that, the models “become deeply uncertain,” says Robert Kopp, co-director of the Coastal Climate Risk and Resilience initiative at Rutgers University in New Jersey. Cities might find it more useful to cast narrower geographic projections on multiple timelines, he explains.

Oakland, for its part, combined data from the IPCC, area academics, and state meteorological reports with input from public meetings and alliance groups to build its road map. Kristina Hill, a University of California, Berkeley ecologist and urban designer, is with the East Oakland coalition that’s helping to achieve the plan’s futuristic vision through restored wetlands, traffic and transit overhauls, and fresh approaches for leading Bay Area neighborhoods.

Hill’s blueprint re-engineers sections of Oakland to be adaptable in the long term, but also to reduce displacement in the short term. “Rather than remove the existing housing owned and occupied by communities of color, I think we can introduce canals,” she says. Her proposals include floating homes, tidal lagoons, and other features designed to protect current and new residents alike. “As all of this redevelopment happens, it’s an imperative,” both for climate action and social equity, Hill says.

In that opportunity lies a conservation upside. In 2016 Bay Area voters approved a property tax (backed by Audubon California) to fund ambitious wetland renewal, offering hope for tattered havens like Oakland’s Arrowhead Marsh and Redwood City’s salt ponds. When restored and expanded, these habitats can further support Ridgway’s Rails and Least Terns, as well as birds at risk of future floods. As important, they add a protective blanket around the stadiums, ensuring safer living for those who will soon call that land home.

This story originally ran in the Winter 2018 issue as “Bellwethers of Climate Change.” To receive our print magazine, become a member by making a donation today.