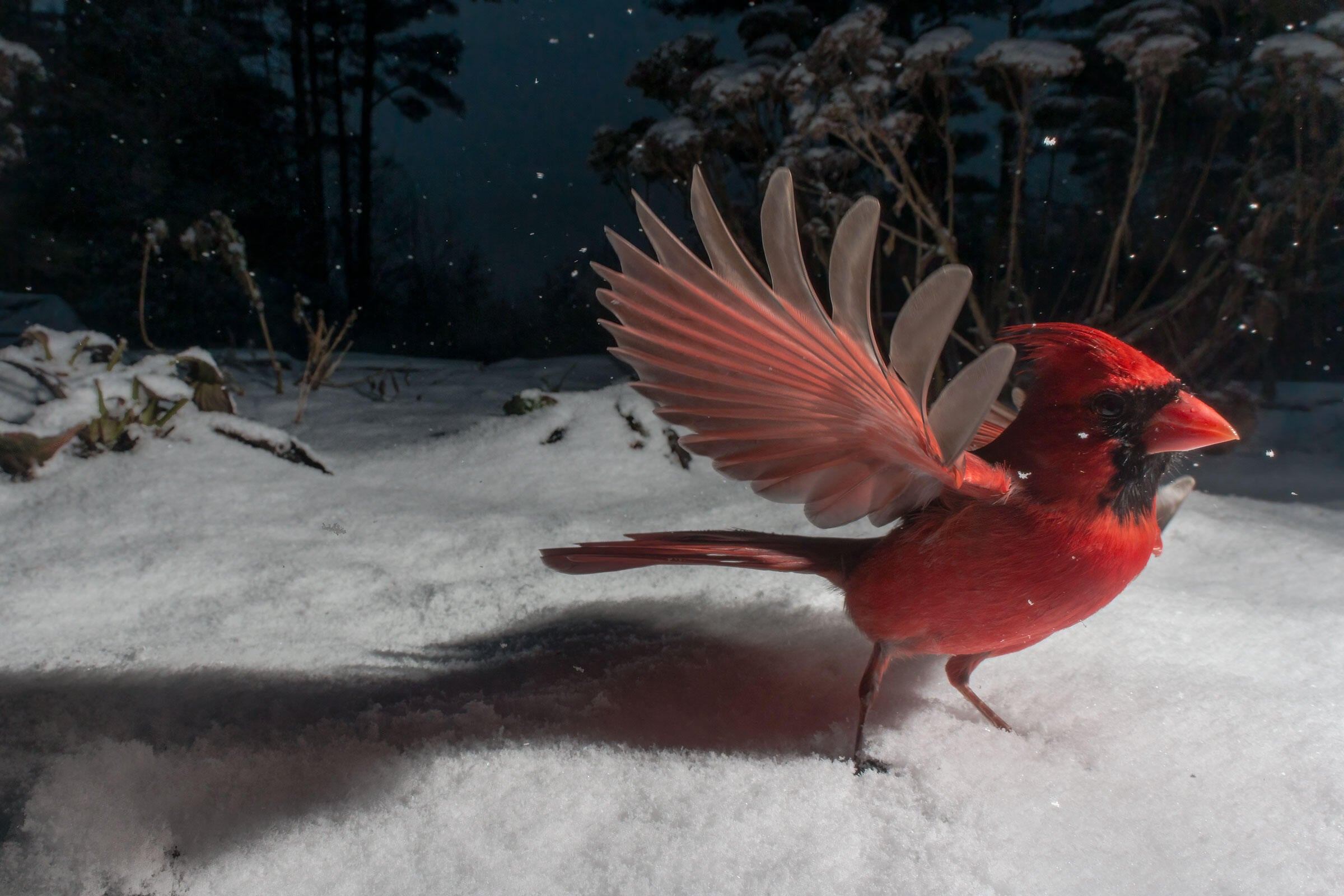 A photographer pursues common yard wildlife from a different perspective.

Amid falling snow, a Northern Cardinal spreads its wings. Its feathers fan out, each one discernible in the dwindling light of dusk. Beautiful moments like this one, captured by photographer Carla Rhodes, happen at feeders across the country—but common backyard birds, she says, are often overlooked.

Rhodes isn’t your typical artist. Before teaching herself wildlife conservation photography, she worked in comedy as a ventriloquist. It’s a career that gave her an interest in new perspectives and a tolerance for failure. She brought that to bear last December with a four-month effort to snap images of small, fast animals from underneath her yard’s bird feeder.

As birds ate from her SquirrelBuster Classic feeder, hung in a crabapple tree, they often dropped seed on the ground, where Rhodes had placed a Canon 5D Mark IV DSLR in a protective camera box. When animals foraged around the fallen seed, a wireless sensor detected their body heat and motion and then signaled the flashes to light and shutter to snap. Her wide-angle macro lens helped her also to capture the stunning backdrop of the Catskill Mountains in New York—but that meant her subjects had to come “within an inch” of the camera. She adjusted settings in advance: high aperture to focus on close-up critters and a fast shutter speed to create clear action shots.

“Guessing all that ahead of time and getting a good photo is pretty darn difficult,” she says. “You have to operate the camera when you’re not there, basically.”

Most of the shots were “duds.” But each day, she adjusted settings to improve her pictures. For some scenes, she slightly buried the camera in the dirt to get it at animals’ eye-level, using a small rock to test the focus. As Rhodes combed through hundreds of daily photos, she noticed stories unfold. Dark-eyed Juncos reliably appeared at the crack of dawn, and Northern Cardinals hung around in the evenings. By night, a mouse collected fallen seed and stashed it in a hole in the rock wall around the feeder. Rhodes watched, through the images, as squirrels, chickadees, and Tufted Titmice took morsels from the rodent’s cache.

Drawn to humorous shots that others may have discarded, Rhodes loved photos of three Mourning Doves “that look like they’re in a gang” and a Dark-eyed Junco that had a goofy face. In one image, a junco peers curiously at the camera from the side of the frame—a great photobomb, she says. She almost deleted that one, since there’s some frost on the lens. But, ultimately, she favored unique shots over perfect ones.

She prioritized safety of her subjects by dialing back the flash to avoid blinding animals and monitoring the creatures’ reactions using a nearby trail camera. “If I ever see that the behavior is negatively impacted, I will pull the setup,” she says, though all seemed well during this project. She also never baited animals, instead using only black oil sunflower, safflower, and other seeds that happened to fall from the feeder and occasionally raked up underneath. To protect birds from raptors and window collisions, respectively, she placed her feeder close to areas for shelter and far from windows. (Editor's note: Read our recent guide to safe bird feeding.)

Rhodes hopes her pictures show people a playful side of backyard birds. “People look past things that they see every day,” she says. “I want to intrigue them and make them curious about nature to hopefully see things in a different way.”

This story originally ran in the Winter 2021 issue. To receive our print magazine, become a member by making a donation today.