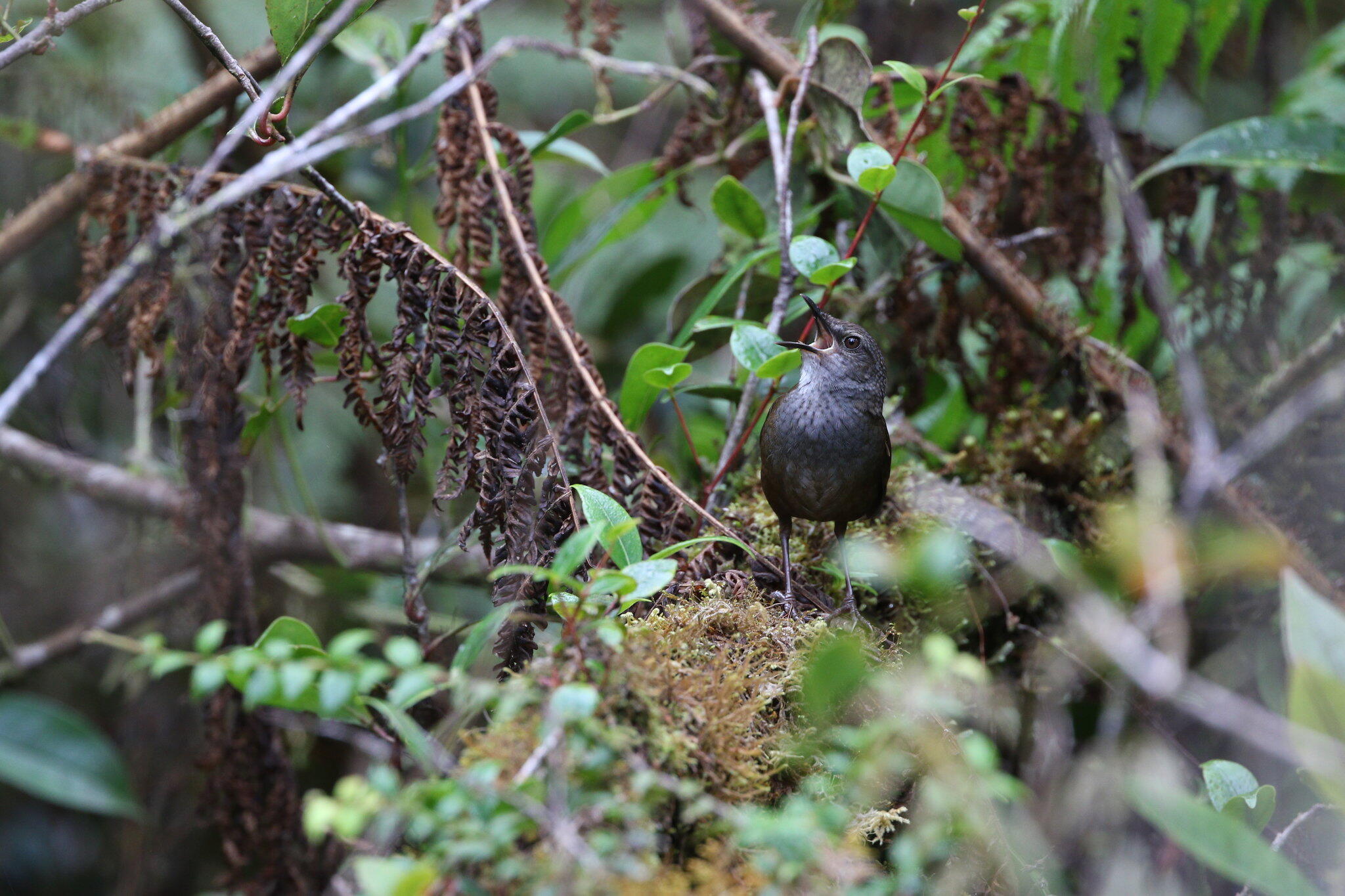 A six-week 2013 expedition to remote islands in the Indonesian archipelago turned up a treasure trove of unidentified songbirds.

Surrounded by deep ocean waters, the rugged island of Sulawesi exists at the crossroads of Asian and Australian fauna. Sulawesi is packed with endemic plants and animals, and its importance in the fields of ornithology and biogeography are rooted in the work of Alfred Russel Wallace, whose travels there in the 19th century led him to co-discover the theory of evolution through natural selection. Close to the equator, the region is still referred to as Wallacea for the naturalist, and hosts an incredible diversity of birds. While the discovery of new bird species peaked during Wallace’s time, new species are still slowly being uncovered, with the potential for big discoveries still possible.

In a study published today in Science, researchers describe five new species of birds and five new subspecies—10 new birds!—from Taliabu, Peleng, and the Togian islands off the eastern coast of Sulawesi. The completely new bird species include the Taliabu Grasshopper-Warbler, Peleng Fantail, Taliabu Leaf-Warbler, Peleng Leaf-Warbler, and Taliabu Myzomela. Making up the subspecies are the Togian Jungle-Flycatcher, Banggai Mountain Leaftoiler, Taliabu Snowy-browed Flycatcher, Taliabu Island Thrush, and the Sula Mountain Leaftoiler. All together, they make for the highest number of newly described bird species from a geographically limited area in more than a century, and the discovery speaks to the importance of continued field-based exploration.

Frank Rheindt, associate professor at the National University of Singapore and lead author of the paper first visited Sulawesi and its surrounding islands while on summer vacation as a doctoral student in 2009. After traveling across many of the well-trodden birding spots in Sulawesi, he sought an opportunity to make some fresh discoveries. “I had a discrete choice there because Sulawesi has a number of satellite islands,” he says. “The thought process was that I wanted to go somewhere with the potential for unique stuff.” To make his choice, Rheindt focused on islands surrounded by deep water that had never been connected by land bridges to Sulawesi.

It would prove to be an important decision. The deep-water isolation of Taliabu, Peleng, and Togian islands provided ideal conditions for speciation. Rheindt also knew that these islands had received fairly little attention by historical and modern collectors and ornithologists, especially to the islands’ lush and mountainous interiors. On his 2009 trip, Rheindt found all of the new birds detailed in the study, but to describe them and prove that they were truly distinct, he would have to return to the islands and lead an expedition.

Expeditions generate the raw material needed for new species discoveries, and extensive field biology typically goes into new species descriptions, including the recent announcement of a new flowerpecker in Borneo and a stunning new antpitta just outside the bustling city of Cali, Colombia. When he finally returned to the islands, it took Rheindt’s team six weeks of field work from November 2013 to January 2014 to collect the observations and specimens they needed to prove these birds were new.

Obtaining the necessary permits to conduct such an expedition is increasingly difficult in Southeast Asia, where governments and national researchers have become wary of foreign collectors, poaching, and biopiracy—essentially the looting of scientific discoveries by outsiders. It was Rheindt’s team-member, Dewi Prawiradilaga, who even made the field-work possible. A senior ornithologist at the Indonesian Institute of Sciences, Prawiradilaga worked for almost two years in obtaining permits, ensuring that the research could move forward in everyone’s best interest.

To locate the new species, the team had to ascend Taliabu’s tallest mountains

Permits in order, Rheindt’s team began by hitching a ride on an empty cargo ship to Taliabu. Once there, they beelined it for the small village at the base of the island’s tallest mountains, where they met with village elders. “In eastern Indonesia . . . if you go into the land that’s owned by a village, it’s like going into a stranger’s house," Rheindt says. “You need to make sure that they know what’s going on and involve them in the research.” After introductions, Rheindt spent several days reconnecting with villagers he met in 2009 and hired a team from the local community.

To locate the new species, the group had to ascend Taliabu’s tallest mountains. Using abandoned logging roads, they climbed more than 3,600 feet to reach their destination. The team dedicated mornings on the mountain to catching birds in mist-nets, taking measurements and samples from more than a 100 individuals on Taliabu alone. Afternoons were spent making sound recordings of the birds’ songs and calls.

“One species defied our best efforts,” Rheindt says. “The local porters had already started to disbelieve in this grasshopper-warbler. I kept telling them, there's this thing that sounds like an insect but it’s a bird. I played the sound to them, and they were like, ‘yea, that's an insect.’ ” The team finally caught the skulky brown bird, and for Rheindt, who enjoys the challenge of differentiating cryptic species, it became his favorite discovery. The locals, despite their skepticism, were less impressed.

After a successful collection on Taliabu, the team returned to mainland Sulawesi before heading to Peleng, the second island, a few days later. “You’re busy up there in the field,” Rheindt says. “There’s no vacation once you’re up there, no day off,” There were also hardships. The team encountered heavy rains that pushed them to the brink. “Outside the camp, it’s a mud-fest,” Rheindt says. “You’re starting to have fungus on your feet, and it’s expanding, and you don’t know what to do.”

The group's tour ended on the Togian islands, where an all-Indonesian team had recently discovered two new birds. Still, Rheindt’s team was able to collect and describe the beautiful Togian Jungle-Flycatcher, a new subspecies. Once they had collected the measurements, sound recordings, and specimens they set out for, the team took on the complex task of placing the birds taxonomically. “We looked at their morphology, at their plumage variation, but that’s by far not the most important thing,” says Rheindt, who says acoustic analysis and genetics were key factors for describing these birds. All of the species that Rheindt’s team encountered are songbirds, and each of them have relatives across the matrix of islands that form Wallacea. It was up to the them to figure out who was related to whom.

In an accompanying perspective on the study, Jonathan Kennedy at the University of Sheffield says the discoveries highlight "the importance of documenting biodiversity today, given the environmental threats that could condemn many as yet unidentified taxa to extinction."

The islands where these new species live also house tens of thousands of people, and Rheindt says the majority of the habitat there has been logged and degraded. Since the 1990s, about 165 new birds have been described, the majority living in South America. But Rheindt believes more and more new species will come from the more than 20,000 islands making up the Indonesian Archipelago, where he has already been involved with a flurry of other new-species descriptions over the years. “Our world needs a new impetus, a renaissance in biodiversity discovery,” he says. “We need more of that now because we can only conserve what we know.”

To that end, while the common names of the new birds simply refer to the islands where they live, the birds’ latin names carry deeper meaning. The stunning red Taliabu Myzomela is named after the village of Wahei that was crucial for the success of the expedition. Another species, the Peleng Fantail, has a latin name referring to the late third president of Indonesia, B.J. Habibie. Rheindt’s team gave the new birds these names hoping to generate local pride in the discoveries and boost the birds’ chances at survival. With local interest in these birds, there's a higher likelihood that the people living here will protect the forest, where additional discoveries surely await.