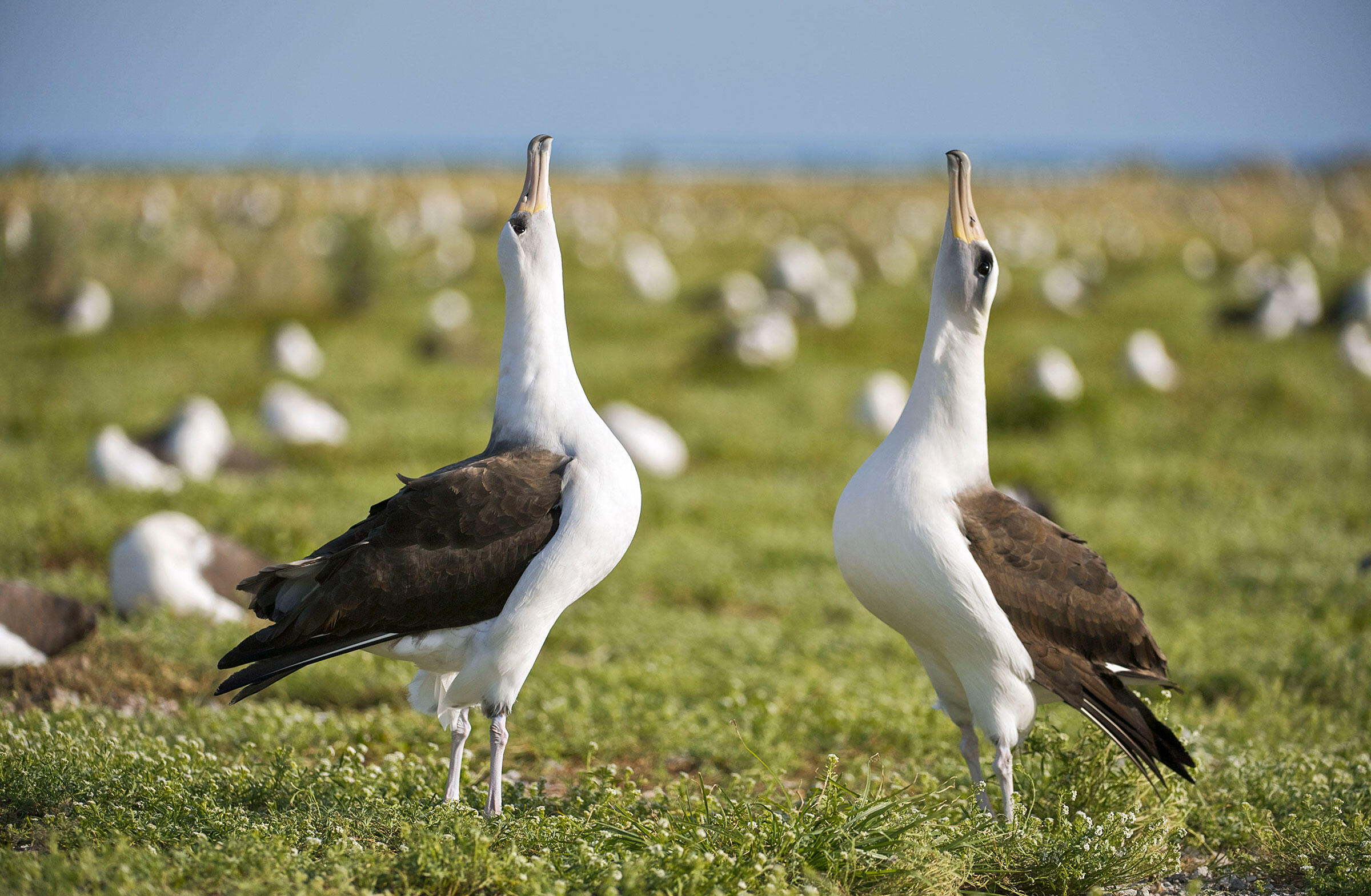 Nature has way better moves than the Funky Chicken.

Some people are simply born to dance—and the same goes for birds. Many species, once grown, find themselves overcome with a primal urge to bust a move.

Some male birds gather in leks, not unlike nightclubs, to dance in a group and invite curiosity from nearby females. Others perform feats of strength and endurance to prove their value. And in some species, males and females dance together to form a pair bond while putting on a show.

Without further ado, here we present a sampling of the best bird mating dances out there. Watch, learn, and maybe even take a few notes.

At around three years old, young Laysan Albatross return to their birthplace to start learning the ways of courtship. Deep in their bones they know the dance moves needed to woo a mate, but they haven’t yet developed their talent. At first, young birds gather in small groups to practice. As the years go on, those groups grow smaller, until finally the confident birds are ready for their big finale: a partnered dance. A new Laysan Albatross pair works hard to perfect their dance, combining stock moves like the “sky snap,” “rapid bill clapper,” and “bob strut” into a sequence unique to that couple. Only then will the birds lay their first egg, typically at age eight or nine.

In Central American forests, male Red-capped Manakins keep their wings tucked and heads down to draw a female’s gaze to their brilliant yellow thighs—and fancy footwork. The birds slide and glide along a branch as if living in a frictionless world, hopping and pivoting to change direction, all to catch the eye of a female with exceptionally high standards. Their pièce de résistance? A  moonwalk that rivals Michael Jackson's.

The Magnificent Riflebird, one of about 40 bird-of-paradise species, isn’t afraid to let loose on the . . . tree branch. He stretches his elegant black wings and then dramatically whips his head from side to side to display his blue iridescent throat. But don’t think that he wants to dance with the object of his affection; no, if a female approaches, he will continue dancing on his own, flicking his wings more strenuously while hopping toward her. Then, the choice is hers: to copulate with him and then raise the brood by herself, or wait for a better show.

The Magnificent Riflebird isn't the only bird-of-paradise with exceptional dance skills. Take a gander at the Vogelkop Superb Bird-of-Paradise sliding around with a bright blue frown.

A male Costa’s Hummingbird is better named Squidface. He begins flirting by swooping and diving over his perched crush, and twists his body acrobatically in the air. That takes a lot of energy and strength—but it’s not enough to impress her. Then, he flexes muscles in his face, and his gleaming magenta feathers flare out. When the sun’s rays hit them at just the right angle (from the female’s perspective), he hardly looks like a bird, and more like a Cthulhu with wings.

At first, you might mistake the male Blue-footed Booby for a demure romantic. He begins his dance by shyly drawing attention to his feet. He might also give the object of his affection a bow, or tickle her with his beak. But then, once both are warmed up, he brings out the big guns: He rotates his shoulders so his stretched long, dark wings frame his face, all while stepping delicately to remind her about those sexy blue feet. If he’s lucky, she’ll slow step right along.

If you’re looking for elegance in the bird world, you can’t do much better than Western or Clark's Grebes. In both closely related species, courtship begins with one bird mirroring the other’s movements, twisting and bowing their long necks behind them. And then, when the moment is right, they take the leap: Like ballerinas wearing pointe shoes, they rise fully out of the water, running side by side on the water’s surface with their wings stretched behind them. Their dance is both a feat of strength and a transcendent spectacle. (You can see examples of both species in the video shown here.)

If you prefer tango to ballet (or even if you don't like either), definitely also check out the bonkers mating display of the Hooded Grebe.

The dance of the Sandhill Crane is iconic, and also extremely awkward. The male begins by doing all he can to attract attention—stretching his wings behind him, bending his neck backward toward his body, and even throwing grass or clumps of dirt into the air. Once he’s caught a female’s eye, the pair begin their gangly dance. They exchange bows and then leap into the air and flap their wings, sometimes completing a 180-degree mid-air turn. It might not seem very romantic, but then again, we aren’t cranes. Who are we to judge?

Jackson’s Widowbirds, which live in Kenya and Tanzania, keep it simple when proving their worth with a good old-fashioned jumping competition. The males, sleek in shiny black feathers and brandishing a long, luxurious tail, gather in a field. Then, they jump as high as they can and for as long as they can. The winner of this endurance test can expect attention from mottled brown females watching nearby.

Sharp-tailed Grouse are the tap dancers of the bird world. At dawn, males gather in a group and begin their show: They rise up—with wings outstretched, heads bowed down, and tails up—expand their purple air sacs, and rapidly stamp their feet. They almost look like wind-up toys as they move forward, backward, and in circles, accompanied by the mechanical patter of their feet pounding the earth.

Love these moves? Learn more about the behaviors of the Sharp-tailed Grouse by downloading the free Audubon Bird Guide app.

What is there to say about the dance of the male Greater Sage-Grouse? It must be seen to be believed. The enormous chicken-relatives sport a regal look, with a spiked tail fan, frilly cravat of bright white feathers, and abundant chest displayed proudly. Then, just when sunrise hits the lek, they perform what’s known as a “strutting display:” The birds heave their chests forward to expand a pair of bright yellow esophageal air sacs (sometimes crudely called “chesticles”), generating a bizarre sound known as a “plop” that resounds for miles. That way, females know just where to find them.

From the City of Angels to the tip of Andes, these couples all have one thing in common.

A new film offers a rare glimpse of the critically endangered bird's dazzling courtship moves on the windswept plateaus of Patagonia.

A rarely seen (and heard) behavior shows us one way crows show affection.