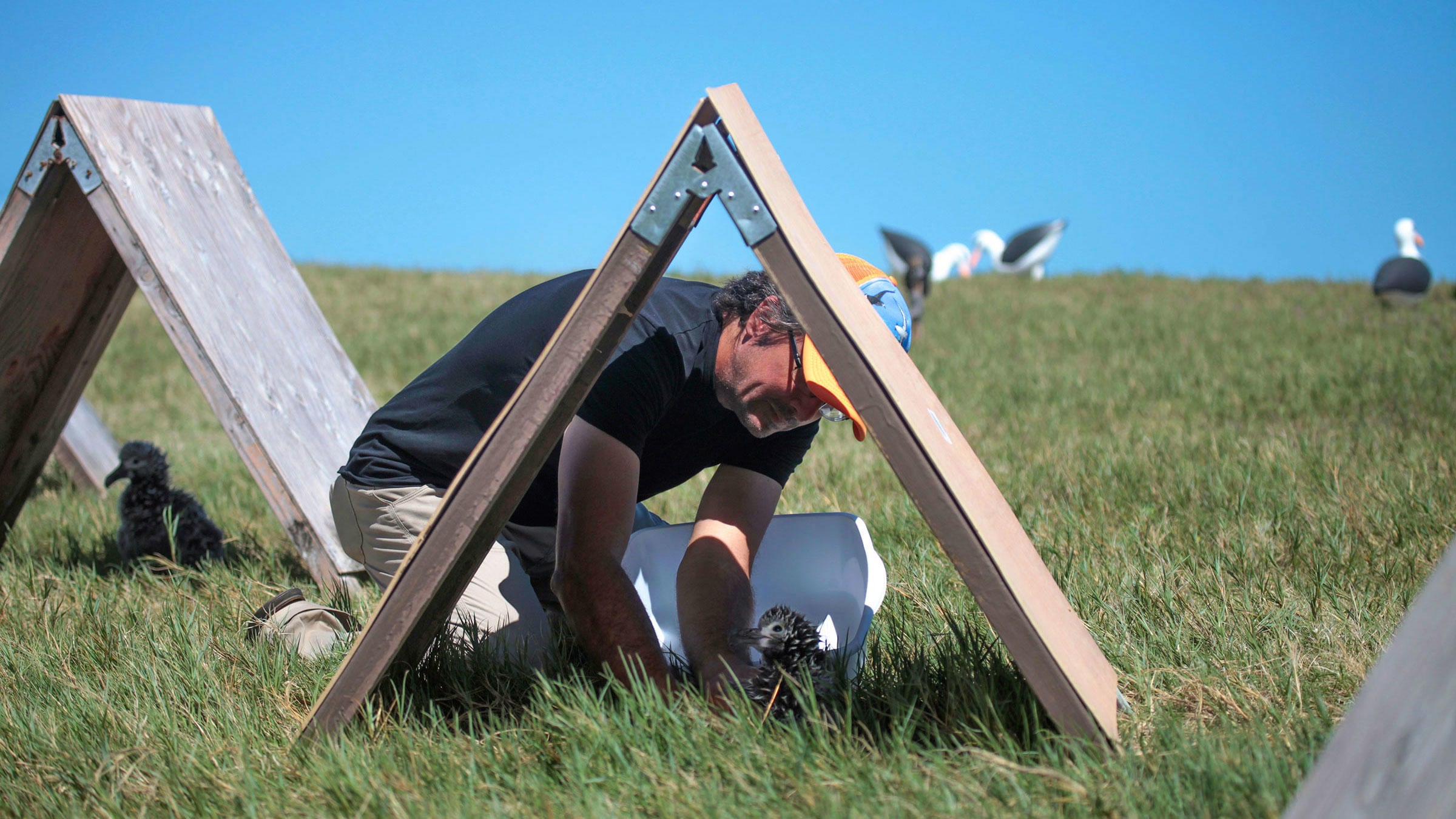 To Save Albatross From Sea Level Rise, an Experimental Colony Lifts Off

In Hawaii, conservationists dutifully tend to downy Laysan Albatross chicks at a new nesting colony created to ensure the species’ future. This is the second of three stories about efforts to save the birds, one egg at a time.

Earlier this month, inside a retrofitted shipping container on Oahu’s north shore, the drone of a high-powered kitchen mixer and stench of fish punctuated the air. Robby Kohley, an avian ecologist sporting an albatross-embellished trucker hat, was macerating a slurry of squid, sardines, and salmon oil with a liquid electrolyte, calcium supplement, and multivitamin—all the nutrients a growing albatross chick needs.

“I call myself a glorified bird janitor,” Kohley said when the Vitamix quieted. He’s understating his role, but his point is well taken. The biologist has spent his life hand-raising birds, starting with parrots in grade school, before transitioning to endangered Hawaiian species like the `Alalā (Hawaiian Crow), Hawaiian Petrel, Newell’s Shearwater, and now the Laysan Albatross. So he knows that most of the labor required to save a species—like prepping food and sterilizing equipment—is unglamorous. “It’s not as fun and interesting as feeding the chicks,” he said.

The chicks were 18 downy Laysan Albatross, and the slurry, divvied up into a few dozen 100-milliliter syringes, was for them. They’ve found themselves under Kohley’s care after a long journey that started at a U.S. Navy airfield on Kauai, where their eggs were laid. Then, as part of the egg translocation project I reported in January, they were flown to Oahu and adopted out to foster albatross parents. After hatching, they were brought here, to James Campbell National Wildlife Refuge (JCNWR) on the northern tip of Oahu, to found a new albatross colony high above the ocean's waves that may prove vital to the survival of the species.

With an estimated 750,000 breeding pairs, Laysan Albatross are not listed as endangered—yet. But some 99 percent of the species nests on low-lying islands and atolls, stretching nearly 1,000 miles along the Papahānaumokuākea Marine National Monument in the North Pacific Ocean, that face the impending threat of sea level rise, an inevitable result of climate change. At Midway Atoll, where more than 70 percent of the world's Laysan Albatross nest, birds occupy just about every available flat surface during nesting season—on land with a mean elevation of less than 11 feet. There, sea level is rising at a rate of around five millimeters per year, about twice the global average. 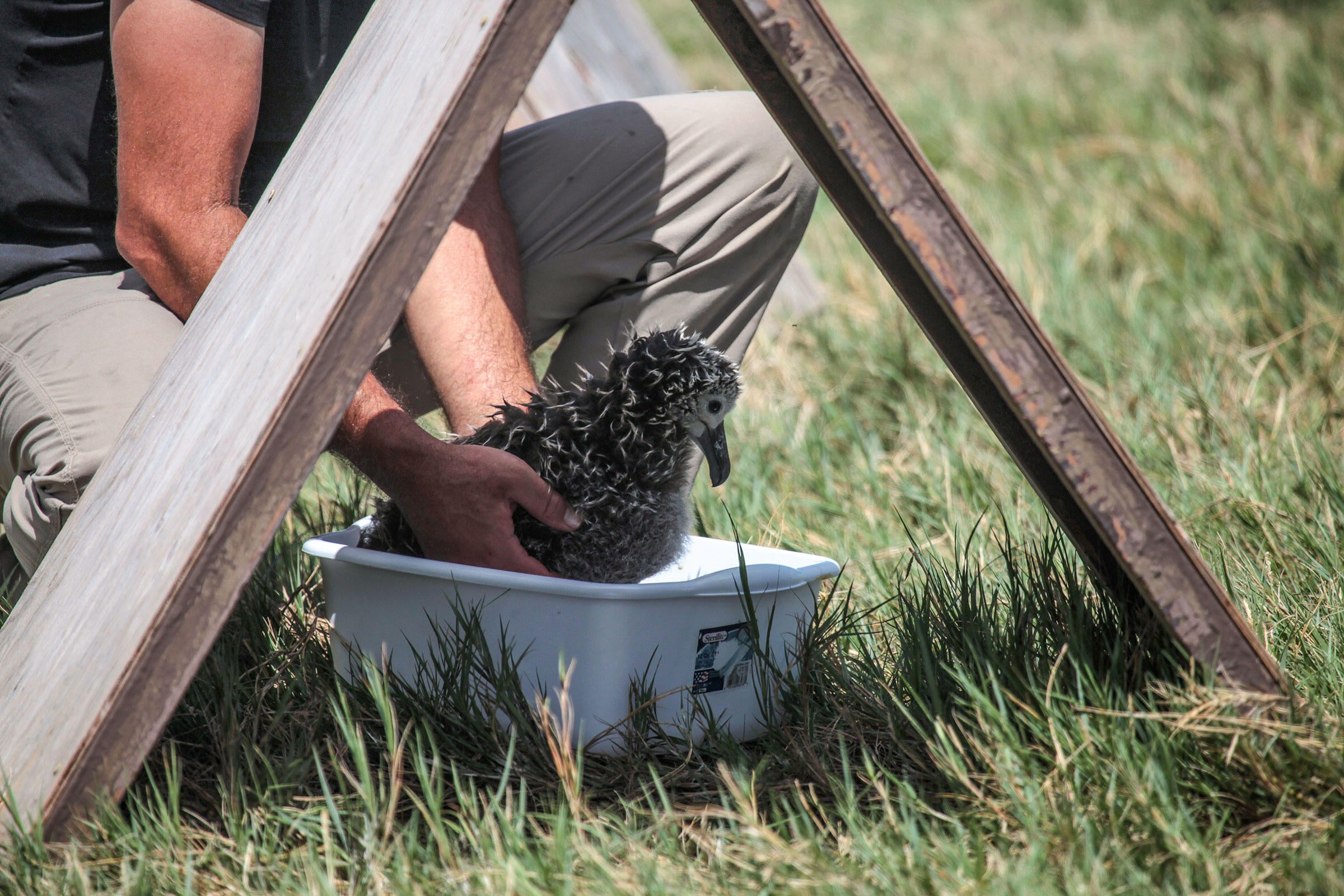 A Laysan Albatross chick gets seated before its quick trip to a weighing and feeding station at James Campbell National Wildlife Refuge. Kohley carefully calibrates seafood slurry feedings to each growing chick to ensure it gets enough food and nutrients. Photo: Kim Rogers

That rate isn’t hurried enough to immediately submerge swaths of nesting habitat. Instead, the problem is the accompanying increase in storm flooding, as waves roll onshore unimpeded and surge farther inland, washing over nests and wiping out chunks of a year’s cohort. It’s already happened. In February 2011, a storm hit Midway Atoll right as eggs were hatching and destroyed more than 40,000 nests, one-third of that year's production. If sea level rises a moderate six feet, a storm could inundate 60 percent of albatross nests at Midway, according to research by Michelle Reynolds, a wildlife biologist with the U.S. Geological Survey.

These high-water events immediately impact survival and reproduction. When Laysan Albatross lose an egg or chick, they do not try to nest again until the following season. And, as covered in the previous story in this series, they steadfastly return to the same nest location year after year, a trait known as philopatry. So it’s not as simple as them trying another nest site above the waves; they’re not wired to experiment that way.

For millennia these traits have proven to be evolutionary advantageous. But human-caused climate change, and its attendant sea level rise, is happening too quickly for them to adapt.

“It’s the frequency of increased flooding that will impact these philopatric birds,” Reynolds told me by phone. “If they lose their nests every year, their populations are going to decline. So it’s a pretty serious issue.”

Enter Kohley and the non-profit for which he works, Pacific Rim Conservation, which partnered with the U.S. Navy and U.S. Fish and Wildlife Service to proactively create the new Laysan Albatross colony on the higher-elevation island of Oahu. The goal of the translocation project is “no net loss”— that is, for every acre lost to sea level rise, an acre will be restored and protected for nesting in the main Hawaiian Islands. 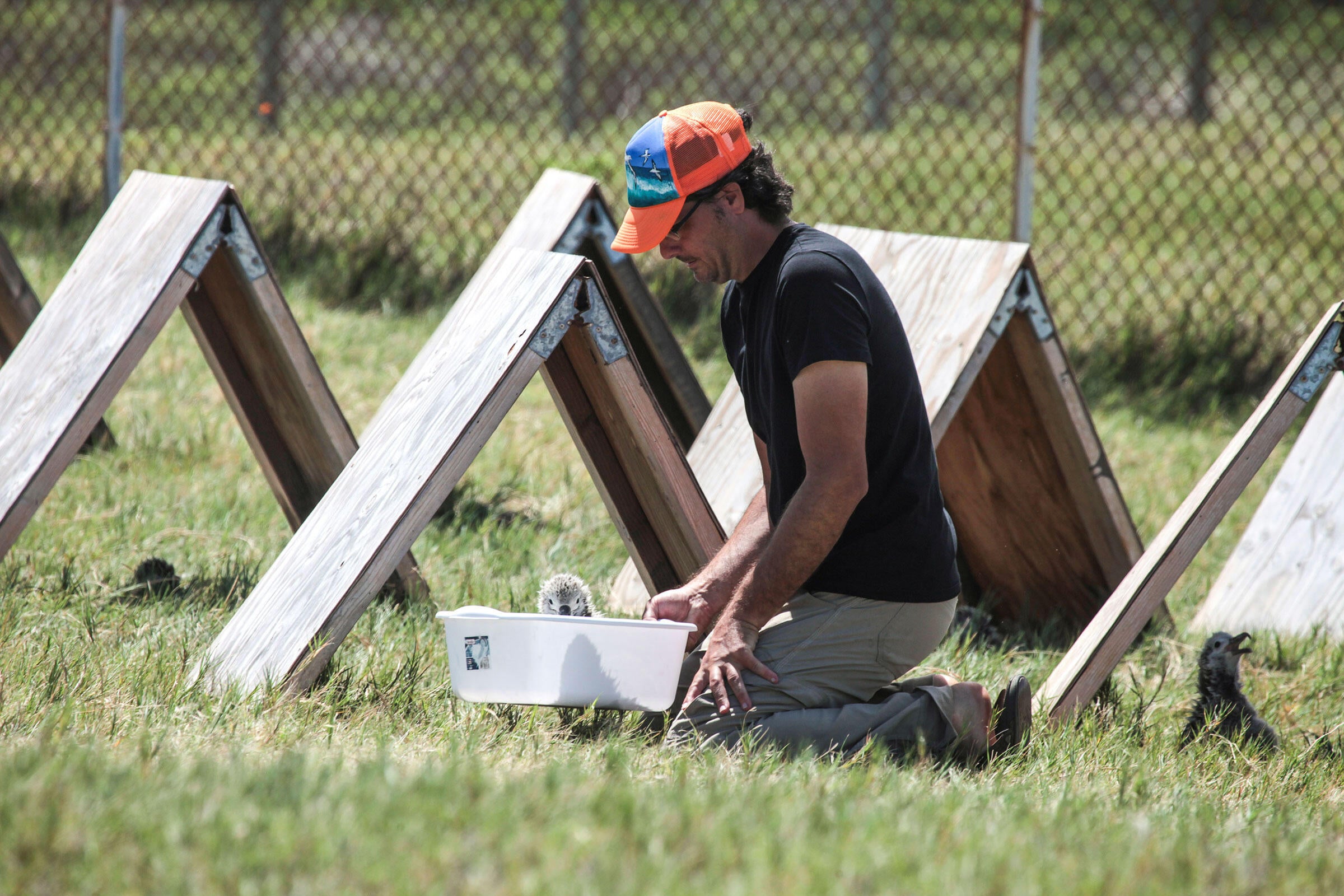 “I think it’s good that they’re starting early to get some of these other colonies going,” Reynolds said. “Because there will be many homeless albatross at the colonies [in the Papahānaumokuākea Marine National Monument].”

That’s what makes these new colonies in the main Hawaiian Islands—with their higher elevations—so important. This year’s 18 chicks cap a three-year effort at JCNWR that in years one and two raised 29 Laysan Albatross chicks to fledging.

Kohley, as the chicks’ dedicated janitor and caretaker, spends nearly every day with them. He feeds them in the mornings and conducts a quick visual check in the evenings. That gives him time to get to know the birds individually. As we packed his SUV with coolers of slurry and other chick-feeding gear, Kohley told me about a chunky one, a social one who invaded other chicks’ shade huts, a mellow one, and a “stressy” one.

The albatross chicks are located on a grassy rise of 16 acres. Recently planted saplings of native trees and bushes will one day offer shade but until then, each chick is provided a wooden A-frame structure as protection from the elements. All this is enclosed by a six-and-a-half-foot tall fence designed to keep out mammalian predators—dogs, cats, rats, pigs, mice, and mongoose. It’s these human-introduced animals that have devastated dozens of Hawaii’s native bird populations over the past 200 years.

If the colony takes off, the enclosed 16 acres could accommodate a few thousand breeding pairs of albatross: those grown chicks returning to breed and, possibly, non-breeding adults looking for mates. In fact, as we arrived, one interested adult flew off. Kohley and his colleagues make the new colony as inviting as possible, despite the lack of actively nesting parents. The adult prospector might have been attracted by decoys painted in the likeness of albatross and situated around the colony, or by the sound system blasting vocalizations of courting albatross, or even by the presence of the chicks themselves.

“Today’s hot,” Kohley said. “My priority is to move through the birds.” 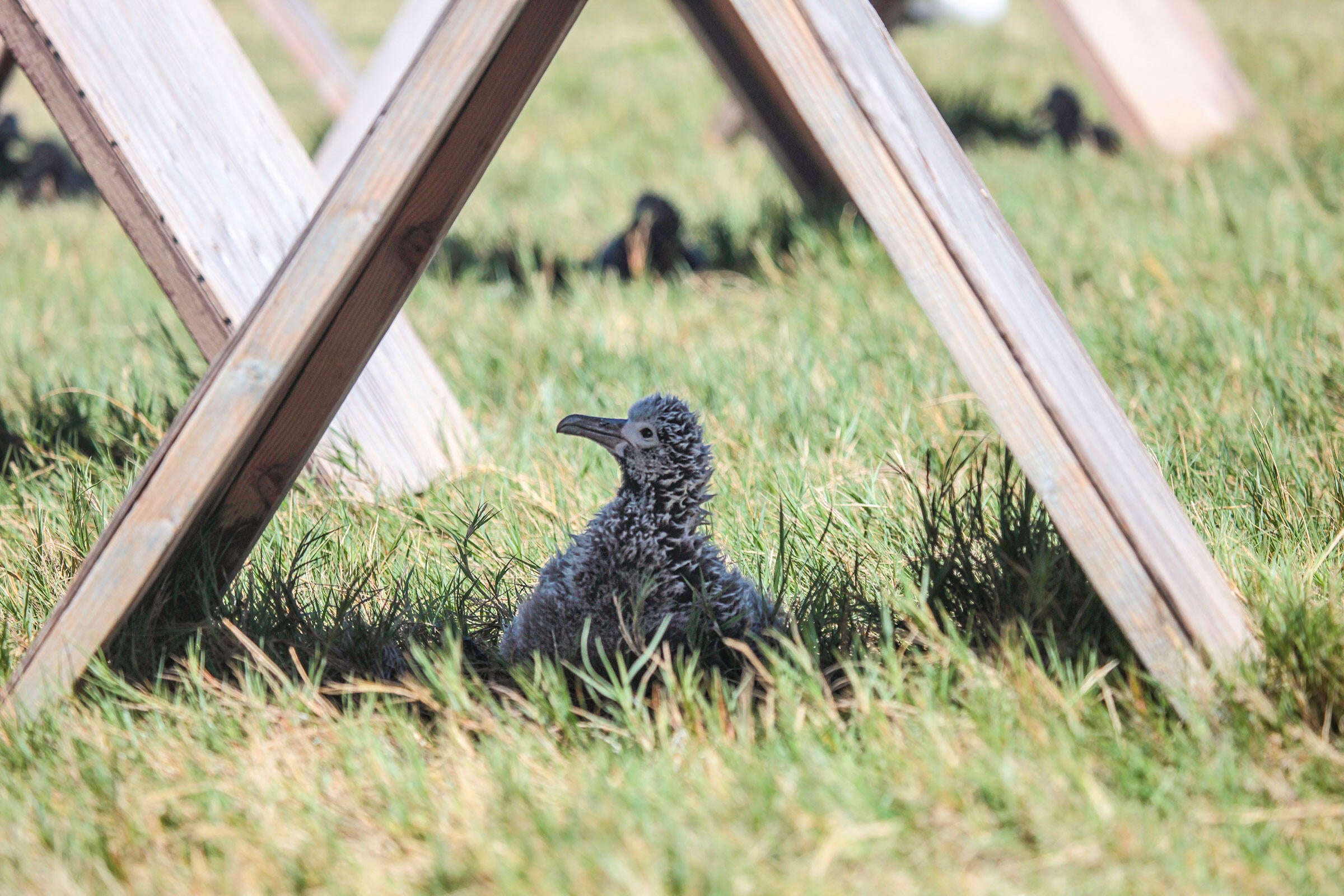 In four months, this Laysan Albatross chick—which started life near a U.S. Navy runway—will take to the skies and, hopefully, return to nest here at James Campbell National Wildlife Refuge within a decade. Photo: Kim Rogers

One by one, Kohley and his team of assistants delivered the slurry to the chicks by way of a tube slipped down their throats. He didn’t wear a mask or hand puppet to disguise his human nature, an effort that is necessary when hand-rearing other bird species like cranes or crows. “These birds came in already knowing they’re birds,” he said. For good measure, these chicks spent their first few weeks of life with foster albatross parents. And while Kohley will feed the chicks—eventually introducing whole foods—every day or so for the next four months until they fledge, that time amounts to minutes a day. For the remaining 23 hours and 55 minutes, the chicks hang out with each other and, hopefully, some non-nesting adults that happen to cruise by looking for mates. Perhaps the best gauge of the chicks’ sense of self is that, as the season wears on and the chicks become more mobile, many will attempt to evade Kohley when he shows up in the mornings.

For now, these hatch-year chicks are fattening up. Soon, their downy feathers will grow out and their wings will begin extending, eventually measure six-and-a-half-feet across. All the while, as the moon waxes and wanes and constellations of stars arc across the sky, they are imprinting on JCNWR. Come June, the fully feathered young adults will stretch their long wings and head out to sea.

When they do, Kohley might get a day off. But then the wait begins. The measure of the program’s success isn’t when the chicks leave the nest. It’s when Kohley’s hand-raised chicks return and start raising chicks of their own. Because albatross are long-lived birds with delayed maturation, it will take 6 to 10 years before the success of this program is known. Until then, Kohley will be watching the skies and awaiting their return.