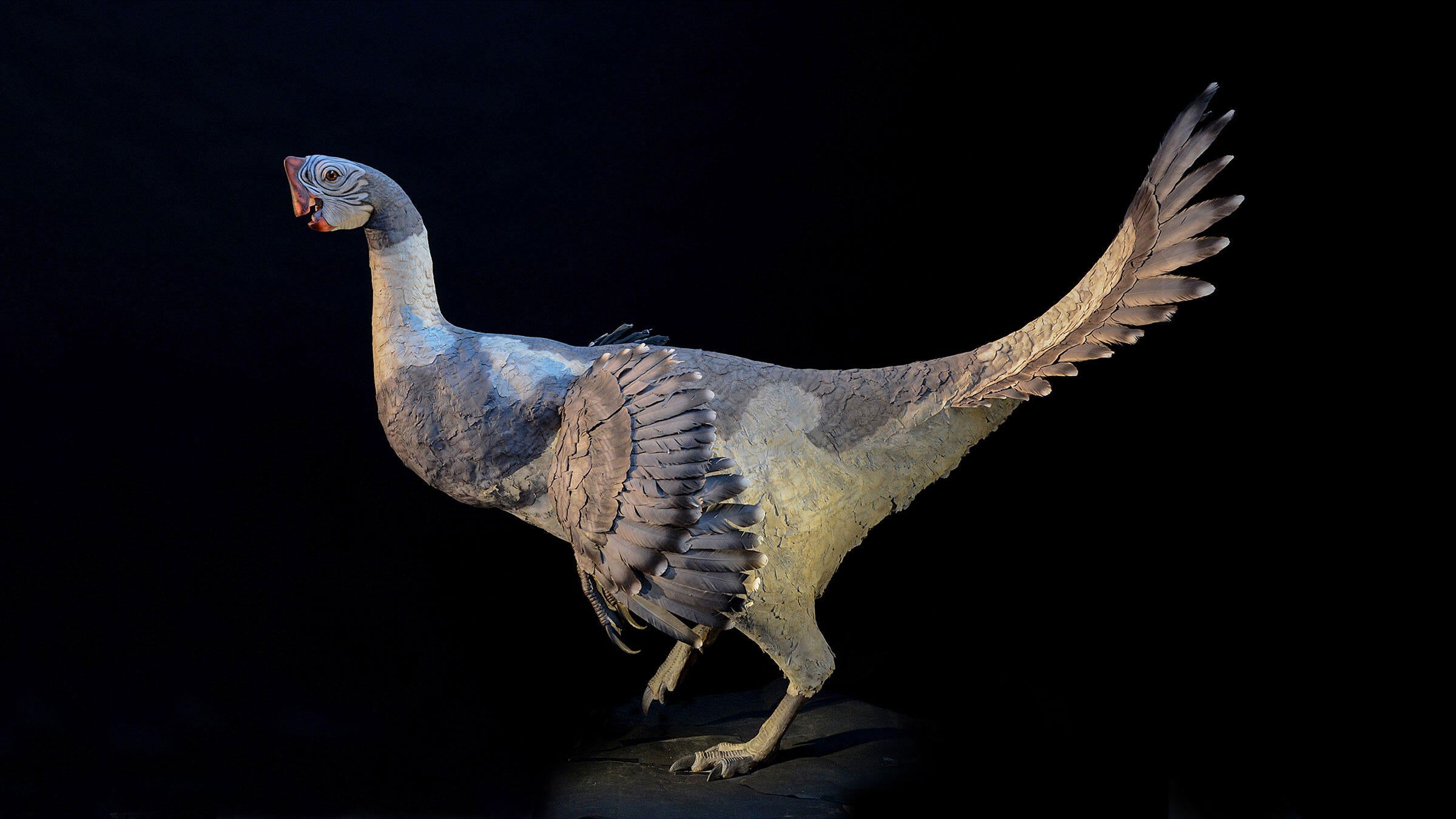 A Citipati osmolskae model from a new exhibit at the American Museum of Natural History in New York City. Photo: R. Mickens/AMNH

Feathers are what distinguishes birds from other existing lifeforms; but they’re also what connects them to the creatures of yore. Over the last two decades, thousands of fossils unearthed in China's Liaoning Province have confirmed what paleontologists long suspected: Dinosaurs rocked feathers long before birds took to the sky. The findings debunk the theory that feathers evolved specifically for flight, and opens a Pandora’s box to the other purposes they may have served.

A new exhibit at the American Museum of Natural History in New York City, titled “Dinosaurs Among Us,” allows us to dwell in the wondrous possibilities. The exhibit is not your typical paleontological scene. It pairs chalky, jagged fossils with models and drawings of dinosaurs extraordinary plumage. Visitors are also invited to build their own flying dinos and explore the anatomical and behavioral connections between birds and their prehistoric kin.

The displays offer a life-sized look at a host of bizarre and terrifying feathered beasts—like the Citipati osmolskae (pictured above)—that blur the line between birds and dinosaurs. And while giant dino chickens are bound to peak interest, it's the revamped models of the bristly, 23-foot-long Tyrannosaur and ruffled, dead-eyed Velociraptor that really stir the imagination. Meanwhile, illustrated reimaginings, like the ones below, further mystify this ancient era of time. 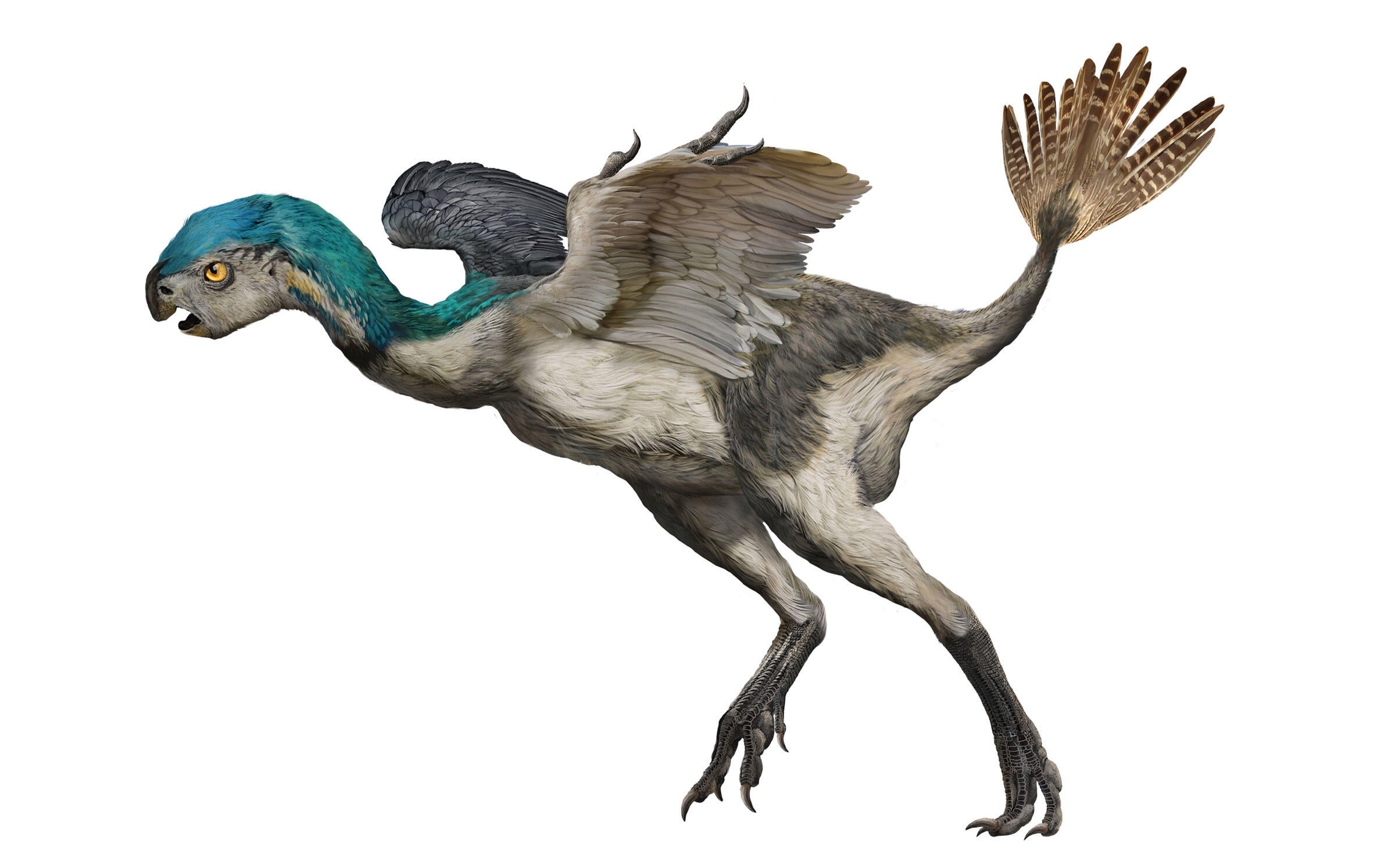 Oviraptorosaurs are cousins to T. rex, but closer cousins to modern birds. They are fairly small, bird-like dinosaurs, most with toothless beaks, wishbones, and skulls filled with air pockets. Some have even been found sitting on eggs in the brooding posture characteristic of modern birds. Illustration: Zhao Chuang/Peking Natural Science Organization 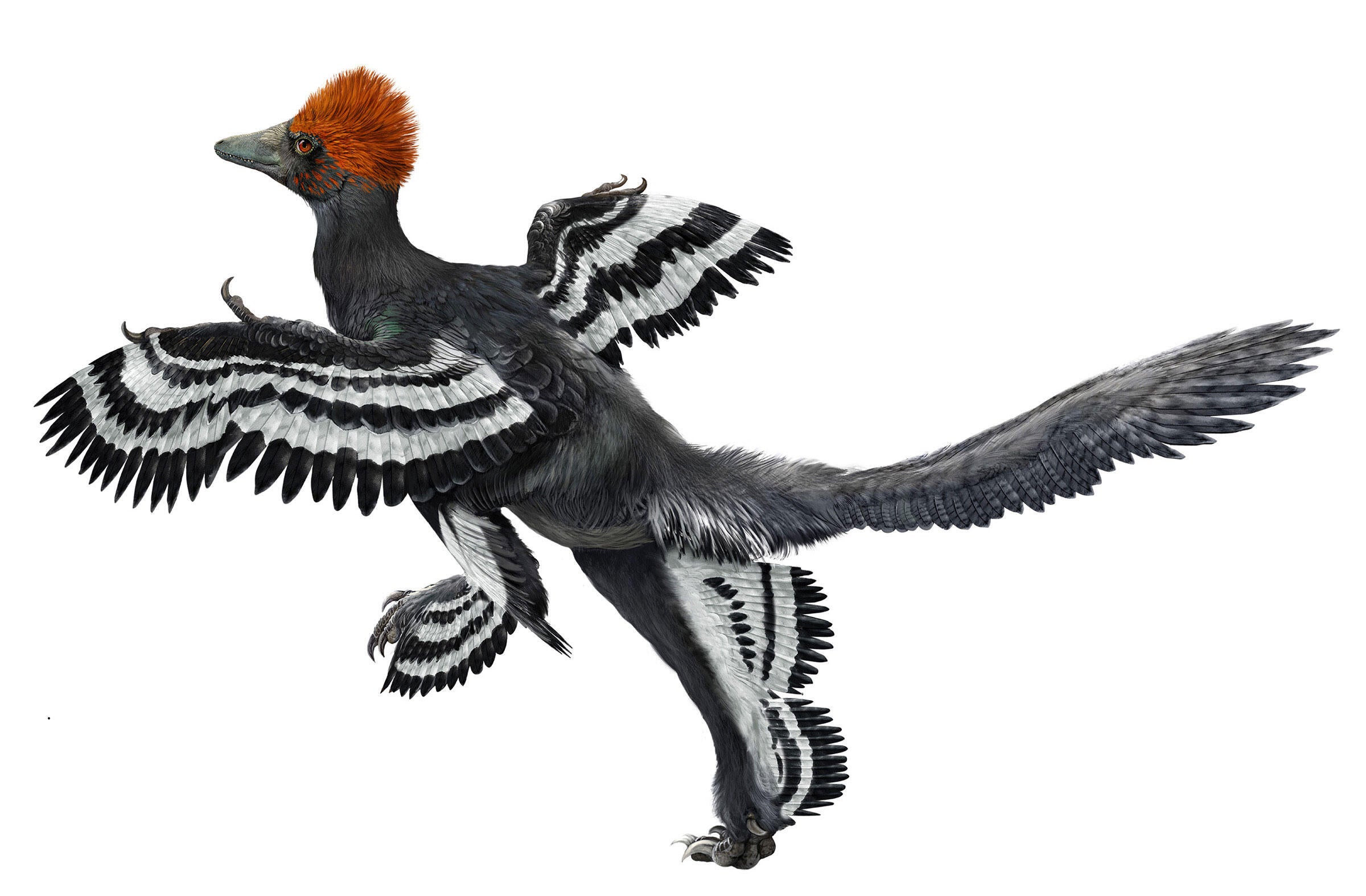 This feathered dinosaur, Anchiornis huxley, which lived in what’s now China about 161 million years ago, embodies the gradual transition from non-avian dinosaurs to birds. Its skeleton wasn’t built for powerful flapping, but its feathered limbs could have provided enough lift to run or jump up to high perches, and flap or glide back down again. Illustration: Zhao Chuang/Peking Natural Science Organization 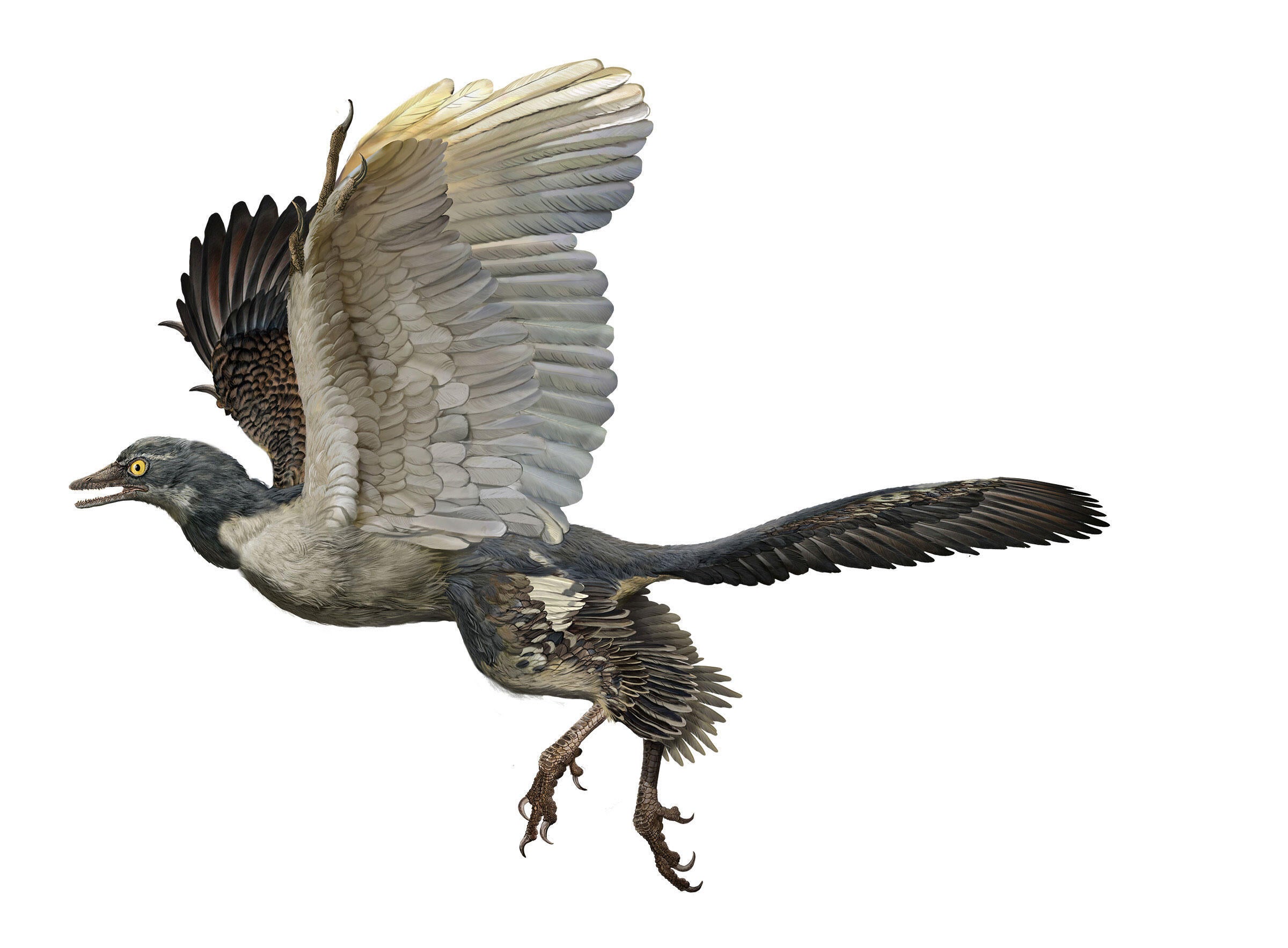 When Archaeopteryx was described in 1861, it caused a sensation. With wings and feathers, it was considered the first bird, although now scientists don’t think it could fly that well. But unlike modern birds, it also had teeth and a bony tail. Discovered not long after Charles Darwin proposed the theory of evolution by means of natural selection, Archaeopteryx provided an example of evolution in action—a fossil that showed the transition between non-avian dinosaurs and birds. Illustration: Zhao Chuang/Peking Natural Science Organization 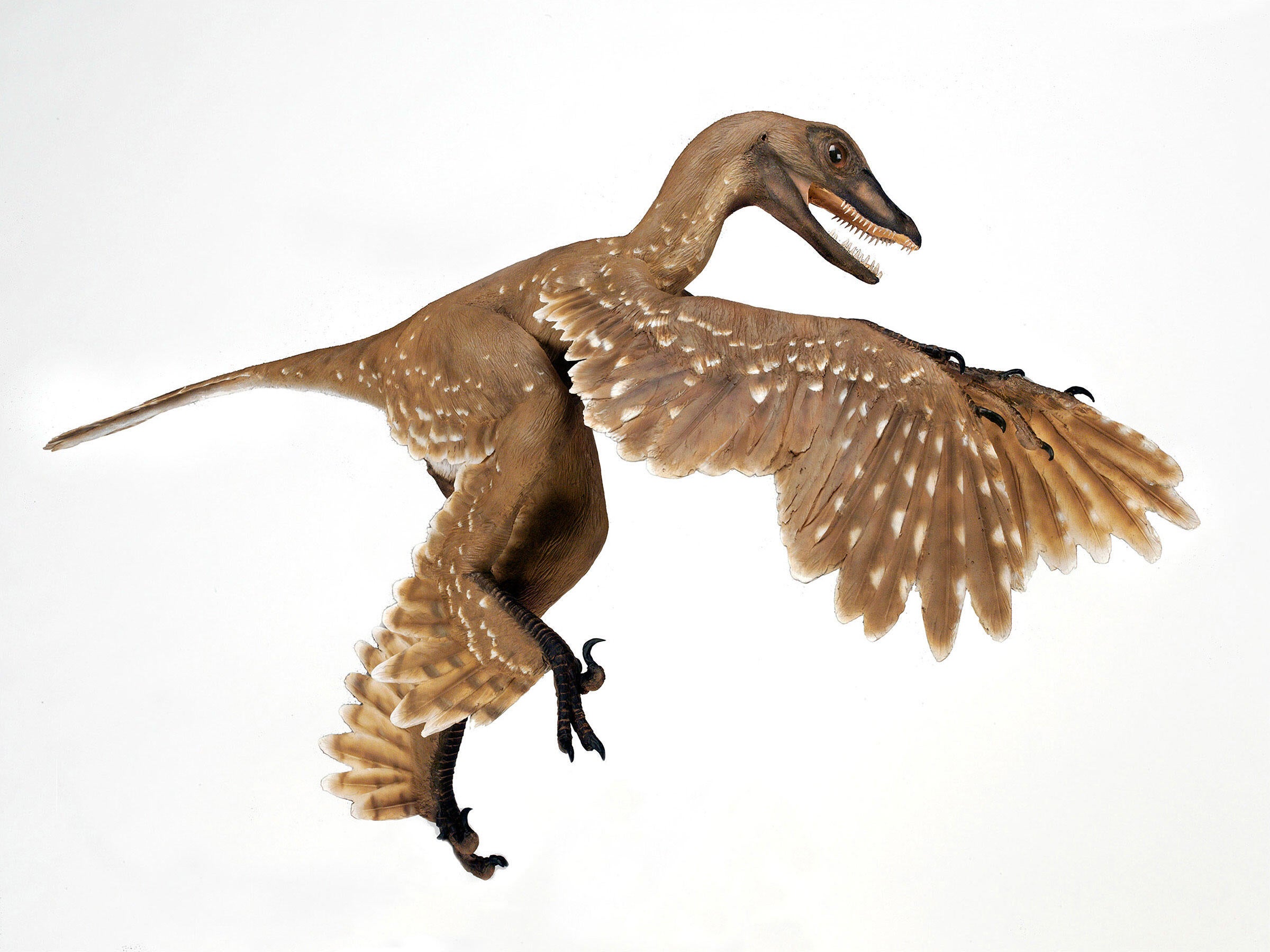 The feathered dinosaur Sinornithosaurus millennii had feathers similar to those of modern birds—even though the animal could not fly. This species was discovered by Chinese and American Museum of Natural History scientists. Photo: R. Mickens/AMNH 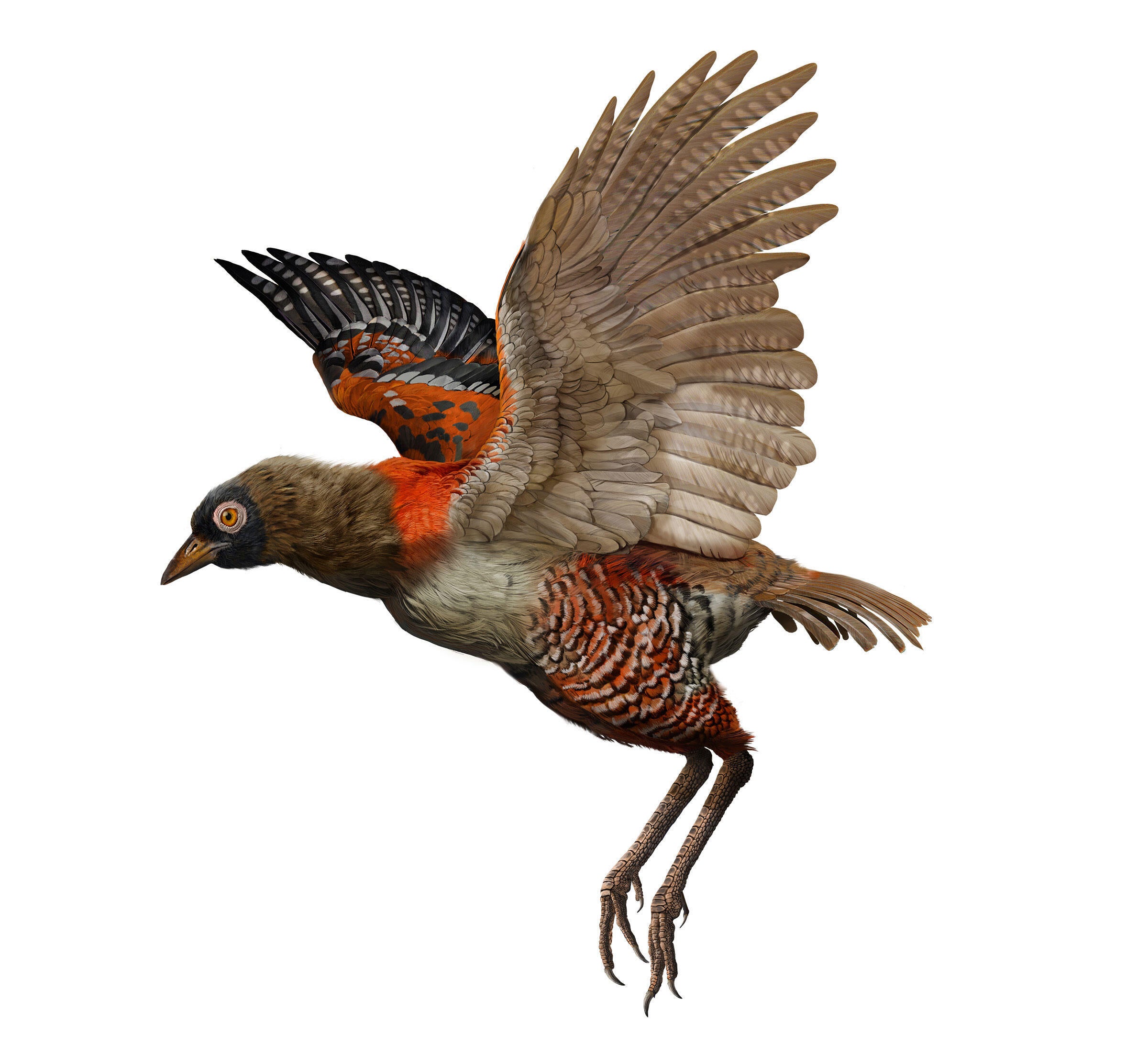 Fossils from the site of Messel, Germany, typically show exquisite details, and the remains of this bird that lived about 47 million years ago are no exception. The feathers of Messelornis cristata were preserved along with the bones. The feathers would have covered the bird’s entire body; but scientists don’t know what color they were in life. Illustration: Zhao Chuang/Peking Natural Science Organization 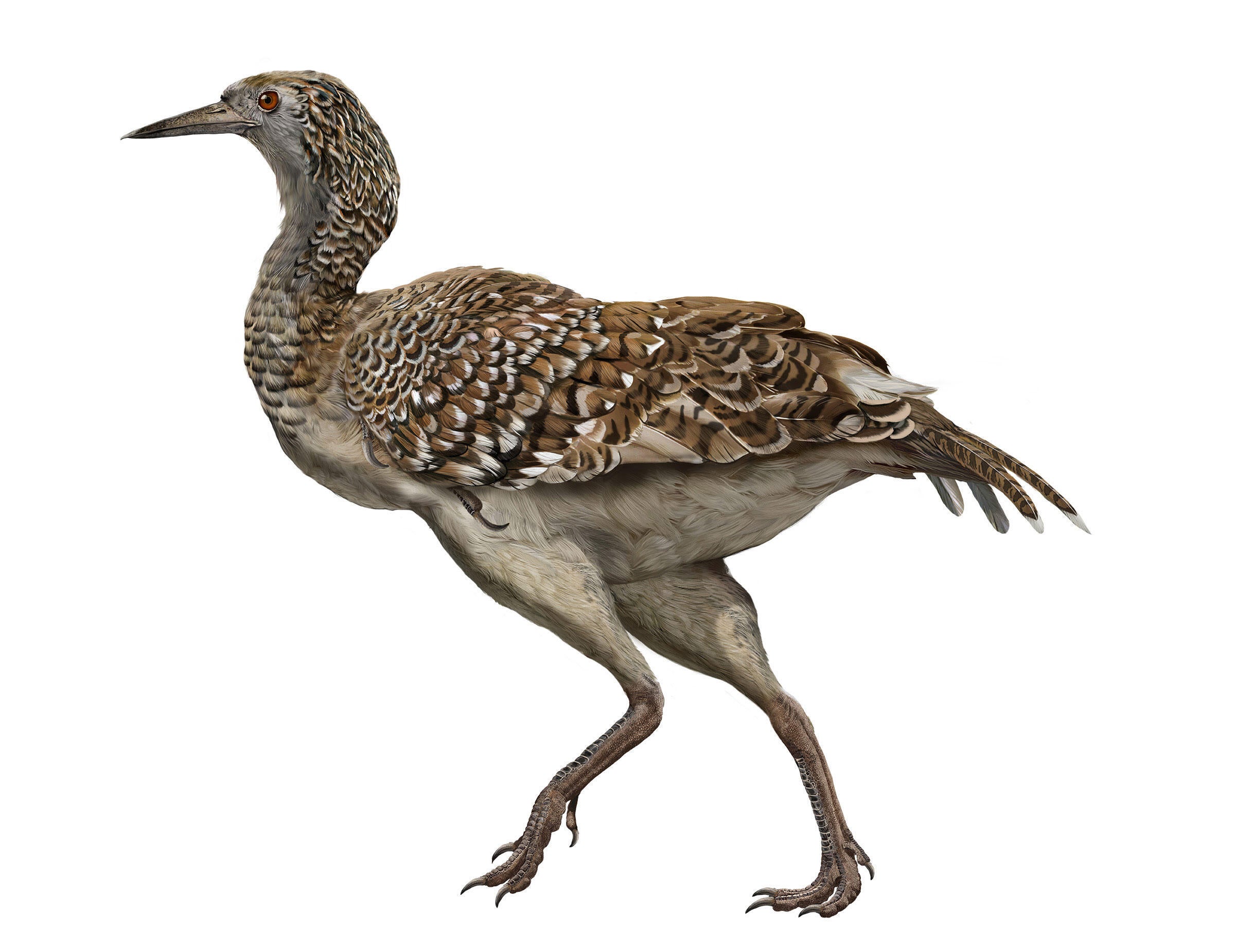 Lithornis is a close relative of Ostriches and Emus, but it could fly. It was once thought that large, flightless birds like Ostriches were a separate evolutionary group from flying birds. But in fact, all birds alive today—even Ostriches, Emus, and other hefty ground-dwellers—evolved from smaller, flying birds. Illustration: Zhao Chuang/Peking Natural Science Organization 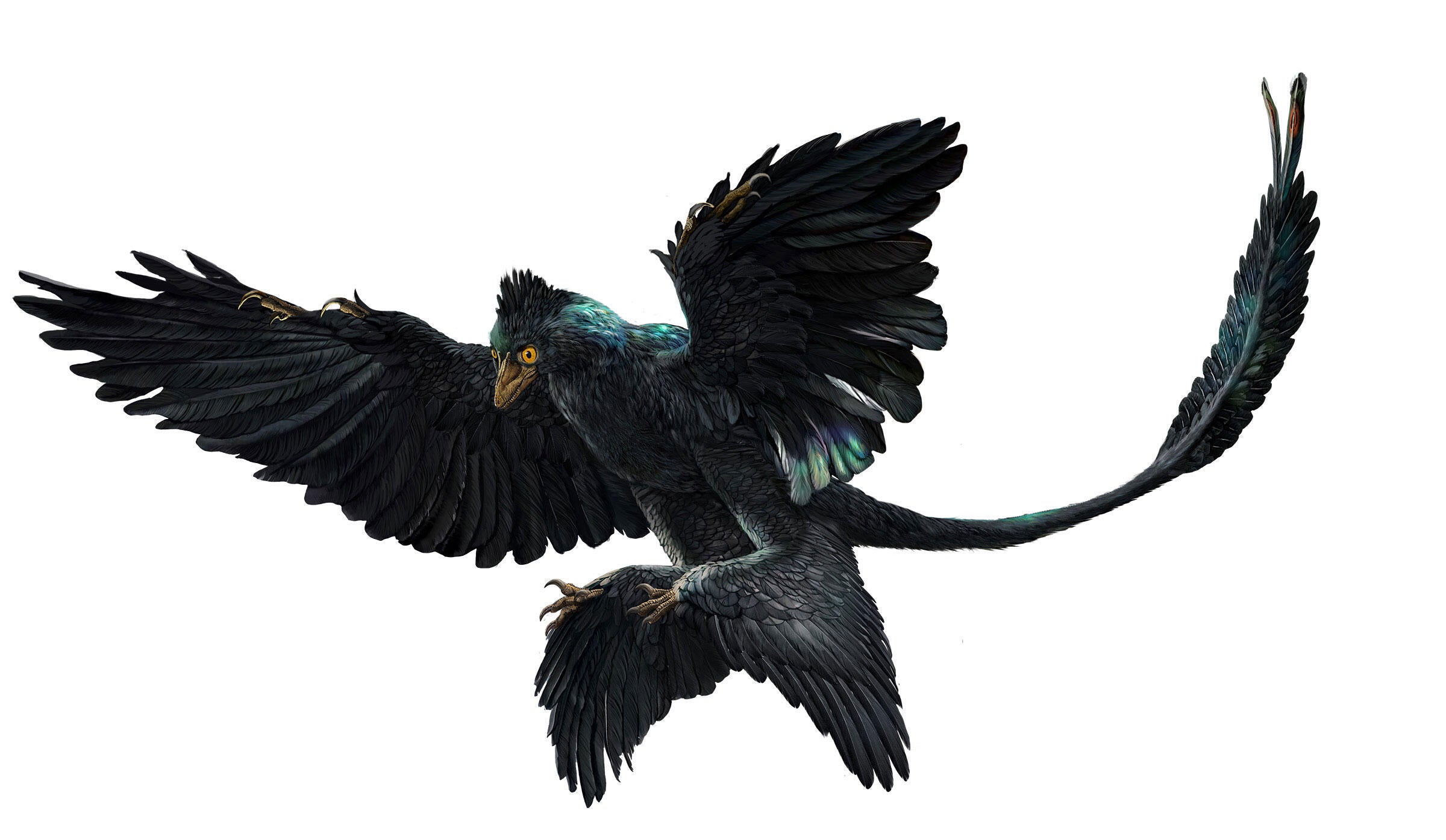 This bizarre, birdlike dinosaur, called Microraptor gui, has feathers on both its front and back limbs. And those rear leg feathers weren’t just decorative; they show adaptations for flight. But could this creature really fly? Probably not far under its own power. But it might have glided down from trees, perhaps even flapping its front limbs. Illustration: Zhao Chuang/Peking Natural Science Organization 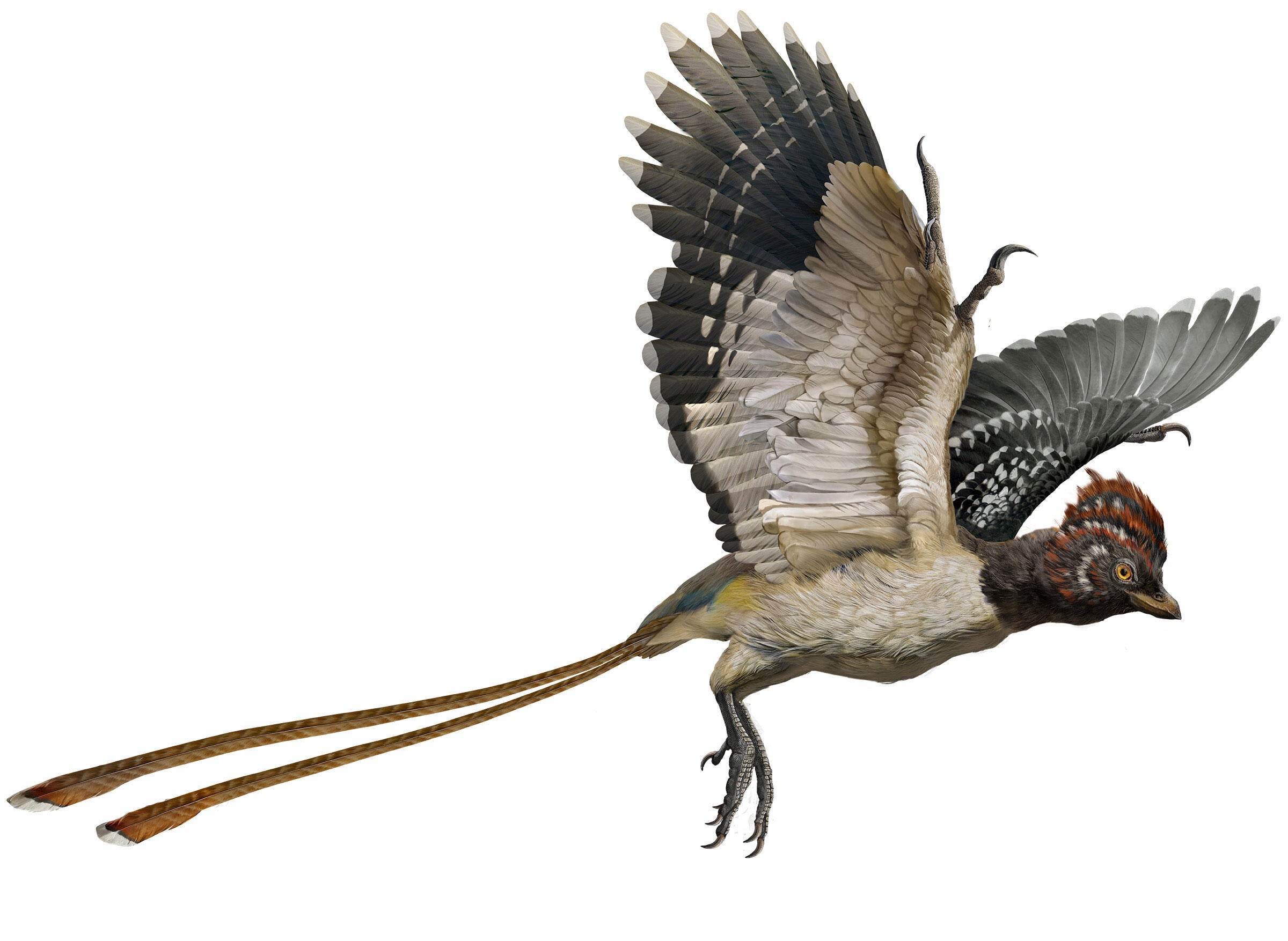 Confuciusornis sanctus is considered a bird, not just a birdlike dinosaur. Instead of dinosaur teeth, it has a beak. And instead of a long, bony tail, it has a short, feathered tail. Yet it probably couldn’t fly as well as modern birds, because its breastbone could not support strong wing muscles. Skeletal features like these continued to evolve after birds first appeared. Illustration: Zhao Chuang/Peking Natural Science Organization 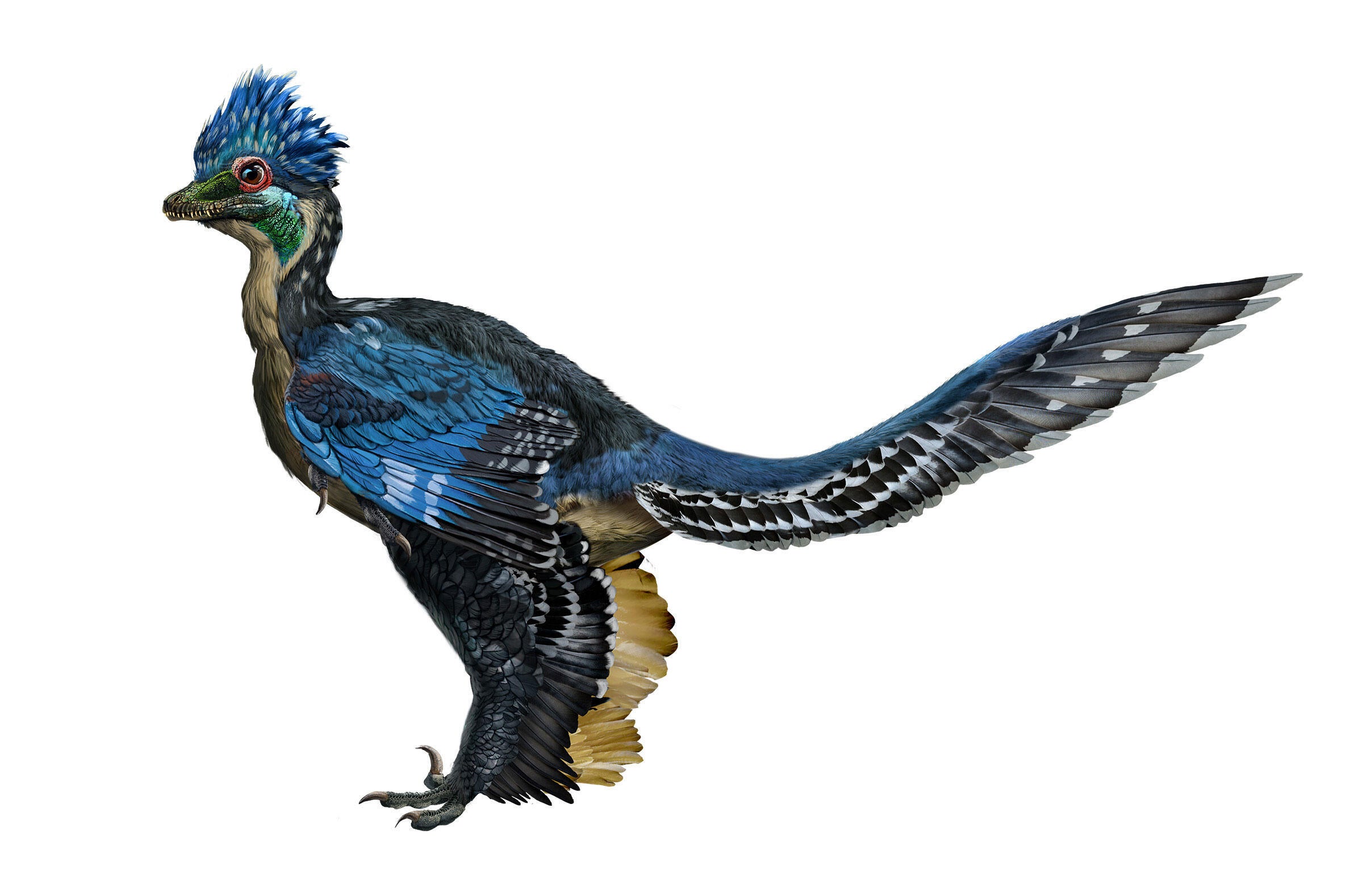 Along with sharp teeth and claws, this small, bird-like dinosaur, called Xiaotingia zhengi, had feathers on all four limbs. It is not known whether its rear limbs had specialized, asymmetrical flight feathers like Microraptor, but it might still have had some aerial ability. Although it didn’t fly like modern birds, it may have used its feathers to slow aerial descents, pounce on prey, leap up to safety, or flap and run up steep slopes. Illustration: Zhao Chuang/Peking Natural Science Organization 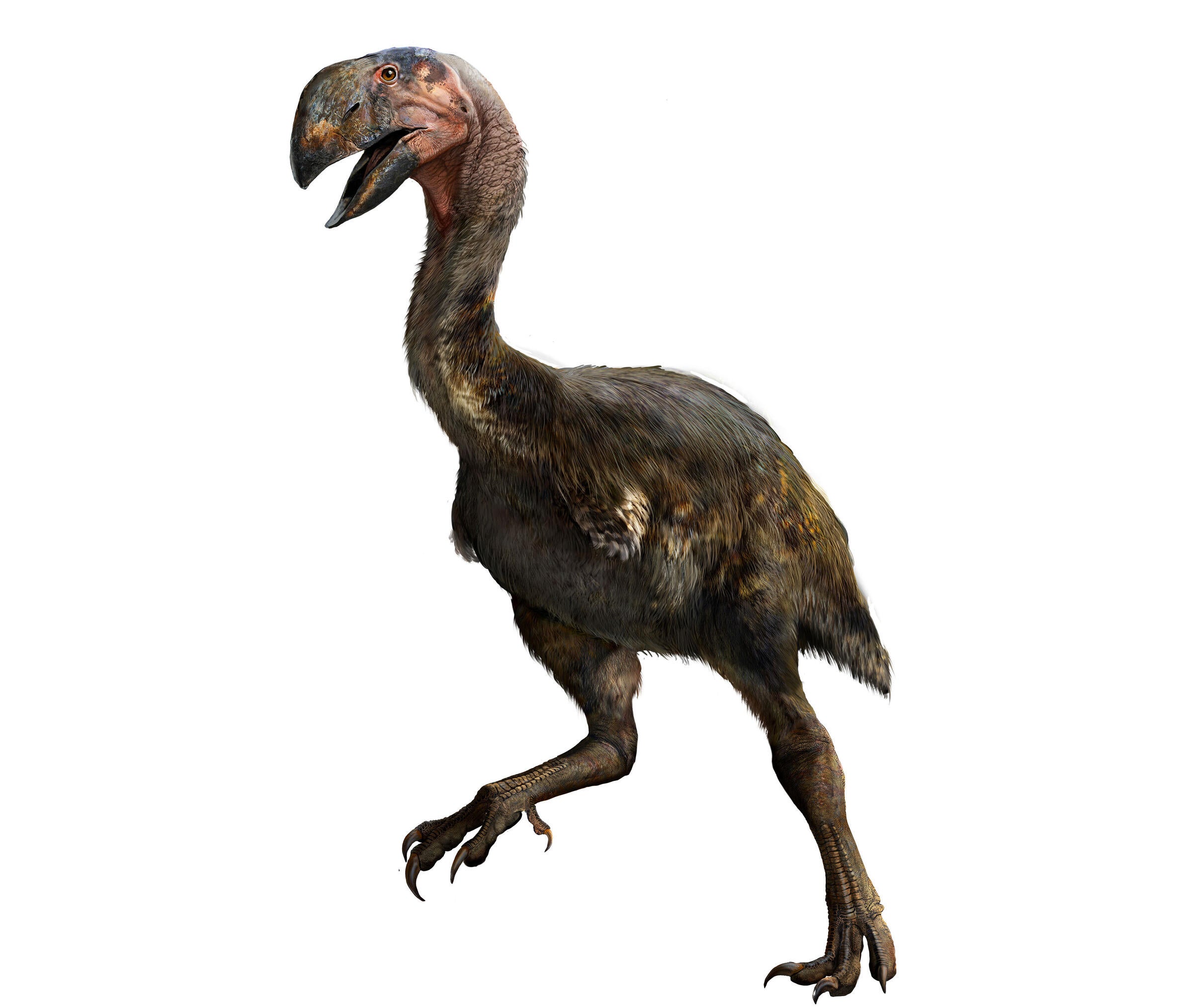 This giant, flightless bird—Gastornis gigantea—would have been an intimidating opponent. It’s even bigger than a Velociraptor, its not-so-distant relative. But while it might have looked frightening, scientists now think this extinct bird was actually a vegetarian related to ducks and geese. Illustration: Zhao Chuang/Peking Natural Science Organization

But what exactly did these ground-bound, alien-looking creatures need feathers for? One of the exhibit’s central themes is that feathers are not just a conduit for flight: Increasing speed and agility, regulating body temperature, and attracting mates are a few of the ways scientists think dinosaurs may have wielded their plumes. Some species shook their dramatic tail feathers to attract members of the opposite sex, just like peacocks and Superb Bird-of-Paradises do today. Others used them to build up a fierce demeanor. One lethal Velociraptor, discovered in South Dakota, sported large quill knobs on it forearms, which could have been used to pin down prey. Meanwhile, the Zhenyuanlong suni—a 6-foot-long Velociraptor described as a "fluffy, feathered poodle from hell"—may have used its giant quills to intimidate other dinosaurs and shelter its chicks. “There's a diversity of [dinosaur] feathers," Gregory Erickson, a professor of Anatomy and Vertebrate Paleobiology at Florida State University, says, "and that's the case of modern birds now."

As more discoveries uncover the evolution of feathers, the difference between birds and dinosaurs becomes more obsolete. "Birds are virtually, in every way, living modern dinosaurs," Michael Novacek, the Senior Vice President of Paleontology at AMNH, said during a preview of the exhibit. Recent findings indicate that distantly related herbivores, like Stegosaurus and Triceratops, sported quill-like structures, too. But it’s the larger carnivorous dinosaurs called theropods (the group that avians evolved from) that first bore the feathery structures scientists believe contributed to modern-day flight.

”I think . . . wings actually evolved as a display structure or an egg-brooding structure, and then these dinosaurs suddenly found themselves with big sheets on their arms that had aerodynamic properties,” says Stephen Brusatte, a paleontologist and evolutionary biologist at the University of Edinburgh who helped describe the demonic Zhenyuanlong sun. “That's probably how flight began—by accident.”