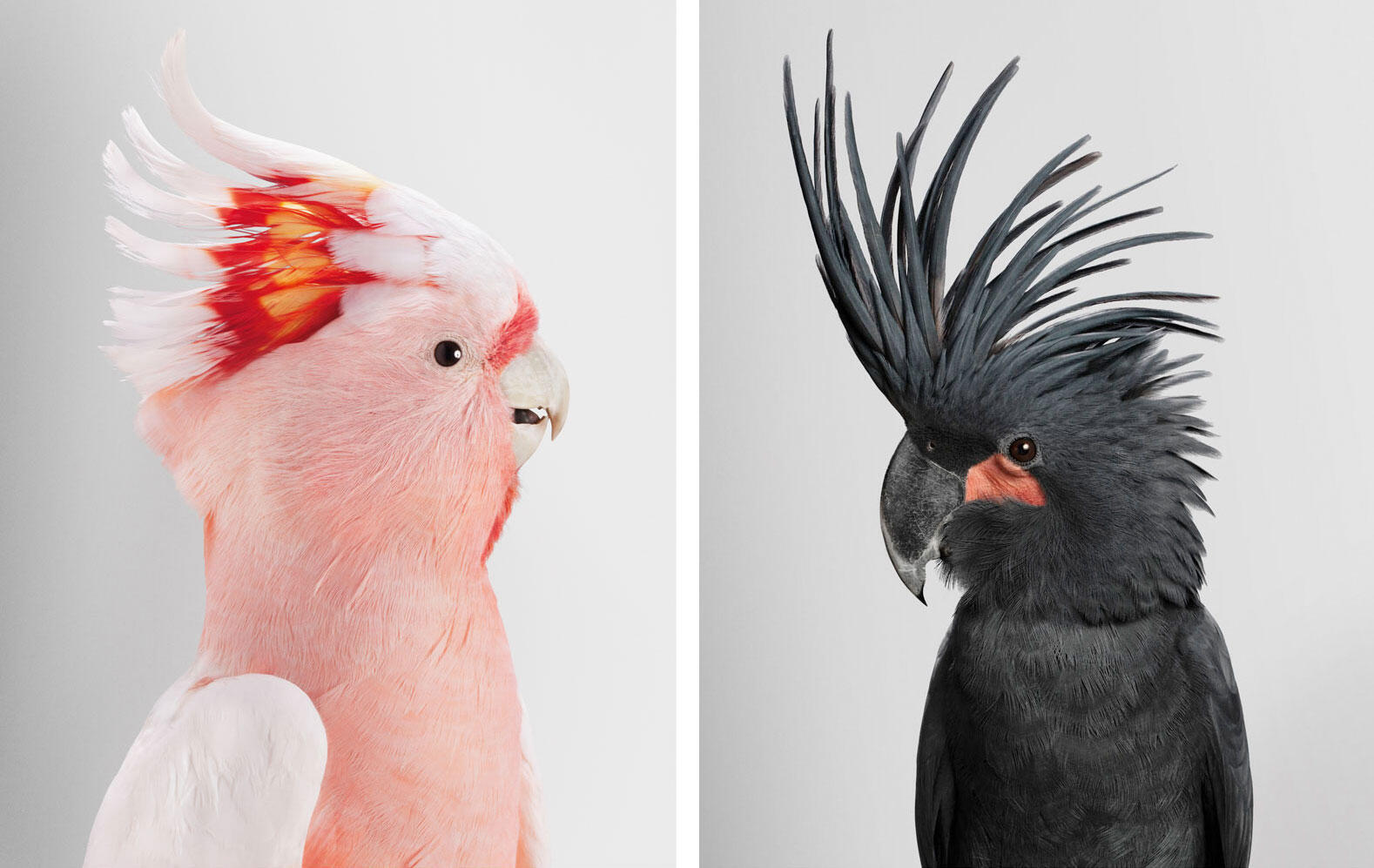 Birds are incredible to look at from any angle. But seeing them up close, with each feather and feature in fine detail—now that’s something special.

That’s the kind of experience that Australian photographer Leila Jeffreys aims for with her close-up portraits of the world’s most beautiful birds. For the past 10 years, Jeffreys has worked with dozens of wildlife care centers, including the Ojai Raptor Center in California, to photograph captive individuals—everything from cockatoos and songbirds, to budgerigars and owls.

Just like a human subject, each bird has its own unique characteristics and personality (and sometimes even a name). Birds of prey are particularly easy to work with, Jeffreys says, because they’re authoritative and aren’t afraid of the camera. The small, quick birds, like finches, are tougher and tend to be more skeptical during shoots. But Jeffreys shows them all off in her photo book Bird Love, which came out last October, and at her new exhibit at the Purdy Hicks Gallery in London.

Jeffreys spoke with Audubon about how she first became fascinated with bird photography, and how she shoots her photos.

Audubon: So how’d you decide to turn birds into models?

Jeffreys: It was one of those weird things that grew very organically. I studied photography and before that I was a birdwatcher. I did a little bit of volunteer work with ornithologists—just tagging, monitoring birds—and I was taking photos while doing that. And it just evolved from there.

A: What’s the process like? How do you prevent the animals from flying around the studio?

J: What I started to do was get to know wildlife carers and go to the places where they were caring for these birds. After a while, the birds became more familiar with me being around them. Then I ended up building a portable miniature studio. Imagine a photographer's studio and shrink it to bird size. There’s a door to walk into, a roll of white paper to be photographed against, a perch to sit on, some catering (seed, depending on species), and water. That is just one setup that I use. It’s not uncommon for me to work in an open room with a bird, too.

Once my equipment was set up, the trainers would get them used to the environment. It worked out well for the birds because it was the equivalent of their rest time. Eventually they’d grow comfortable and start interacting with me.

One thing I learned that’s really important is that you can’t get a good portrait unless the bird is relaxed. So it’s a very slow process and you have to be patient. But it depends on the species of bird because some are more relaxed than others. I’ve worked with some amazing wildlife carers that have an incredible way with wildlife. They have an understanding with the birds that makes my work a lot easier. 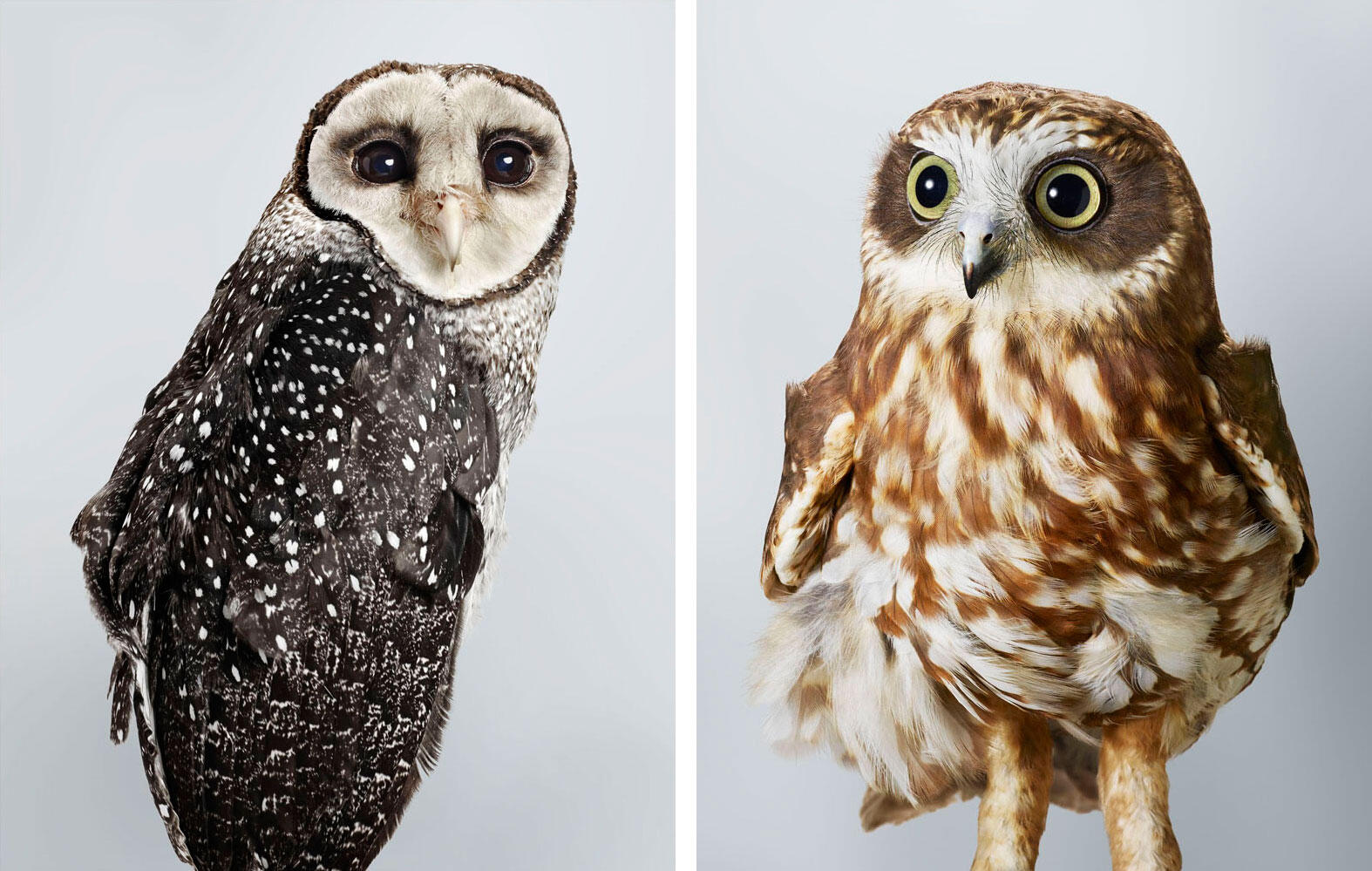 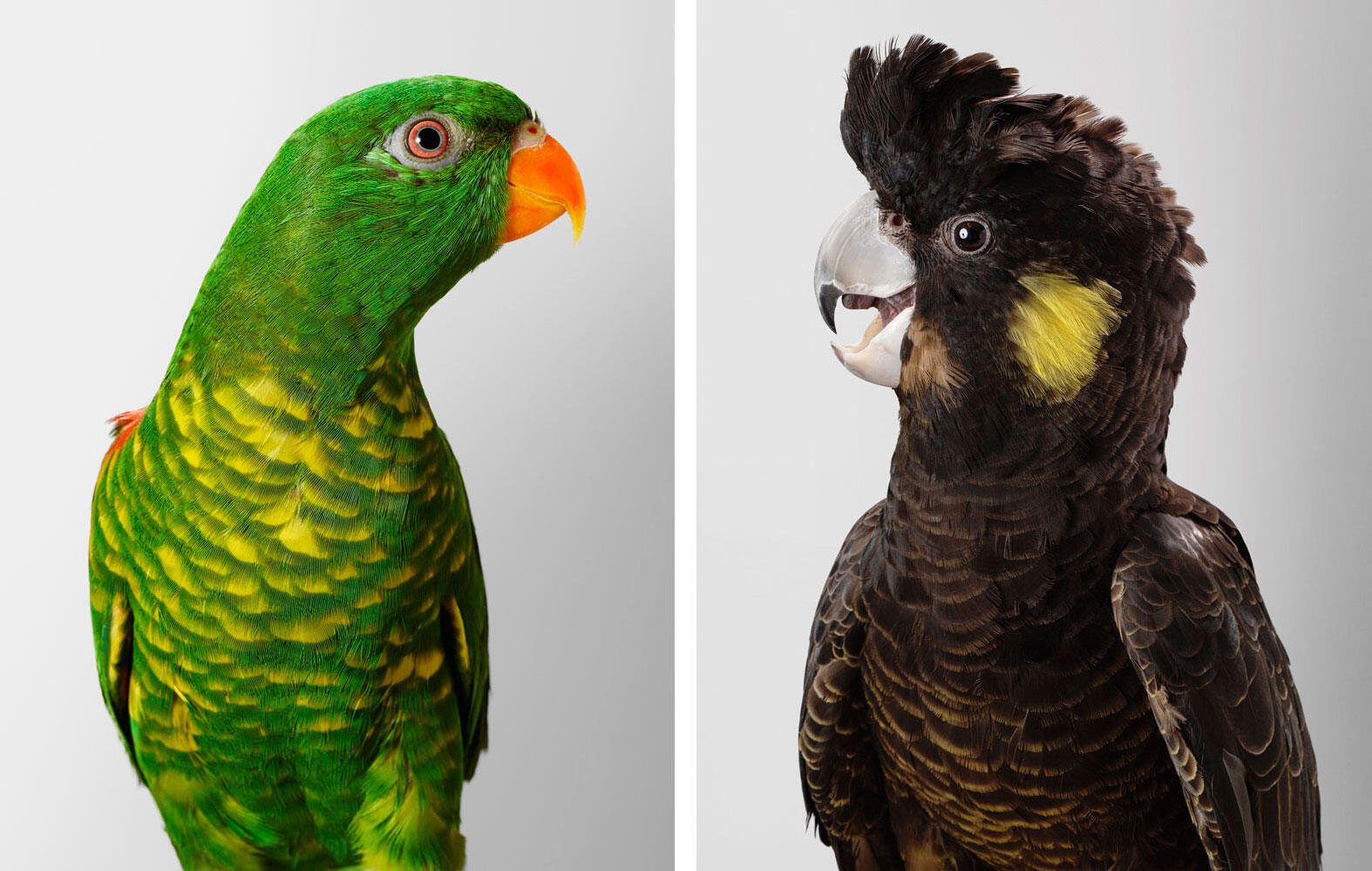 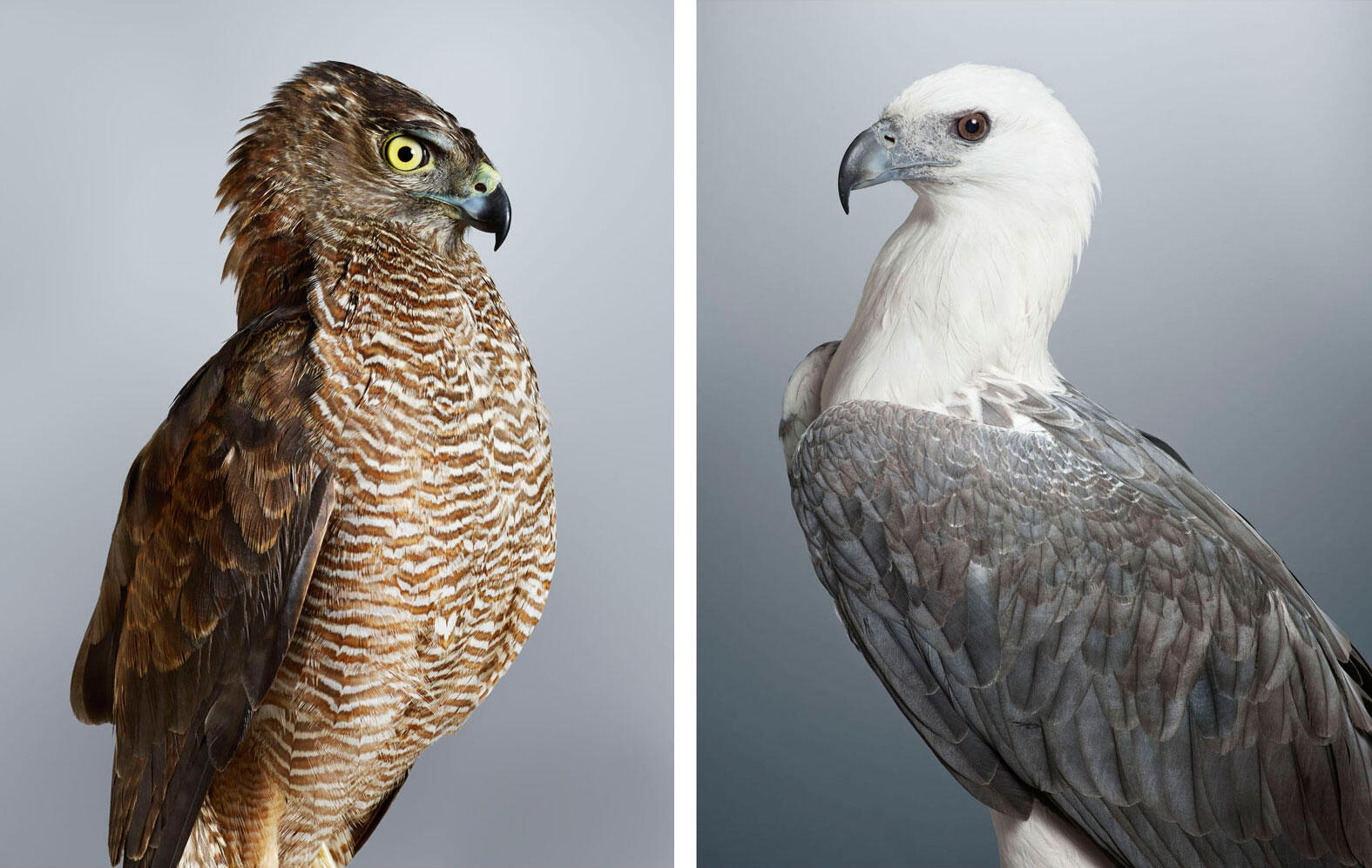 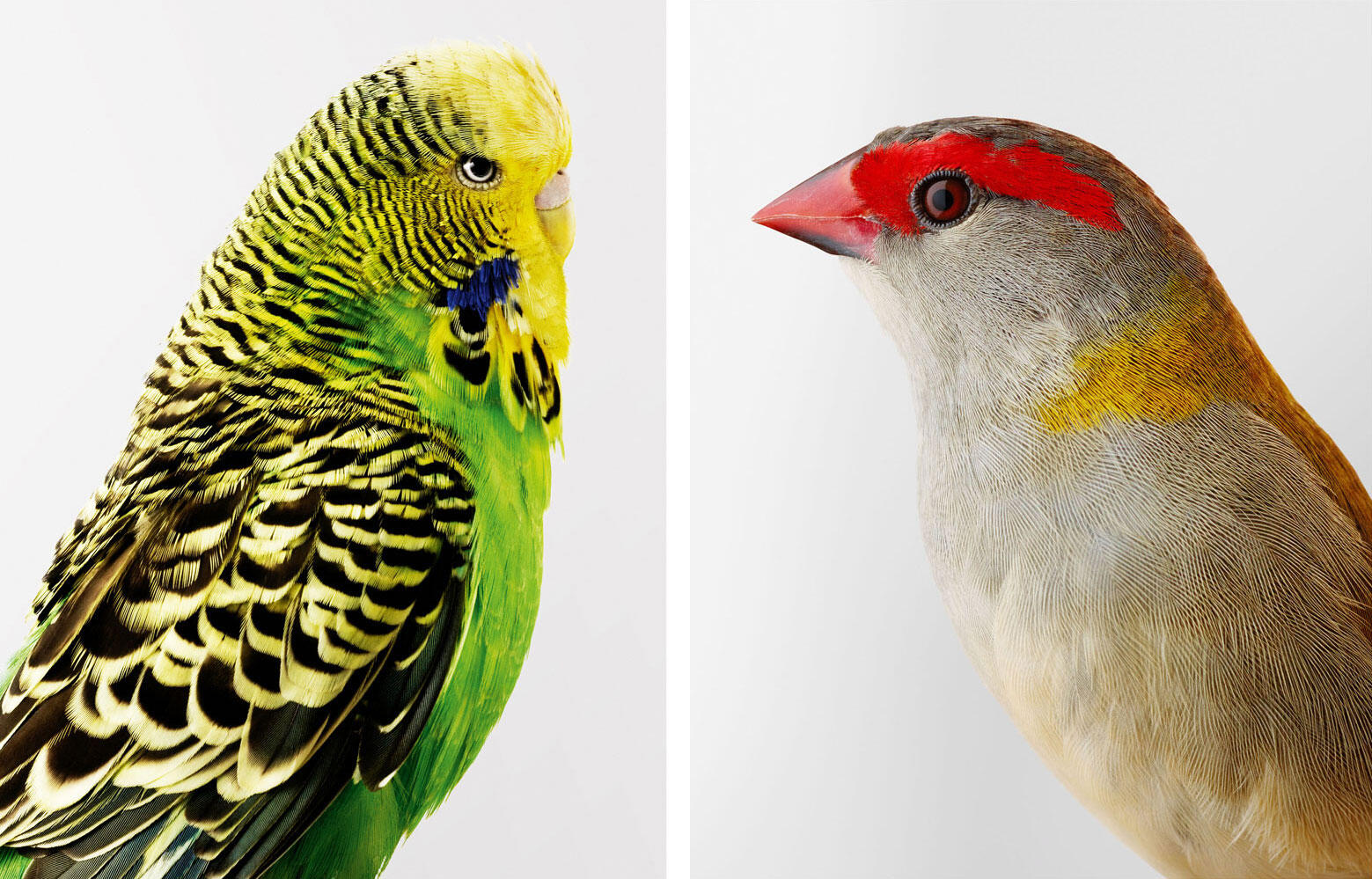 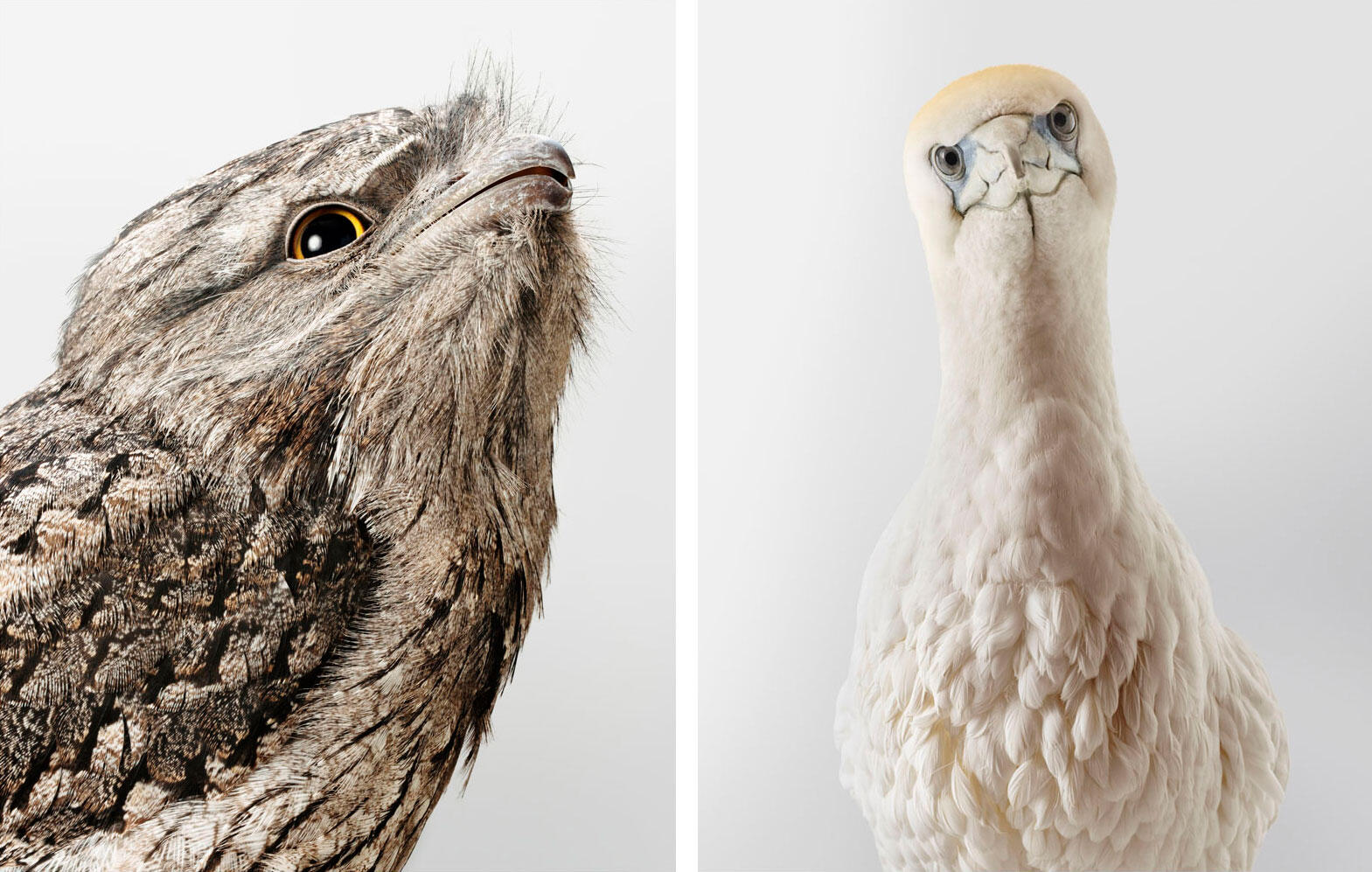 A: How much time did you spend photographing each species?

J: In terms of photographing, I wouldn’t usually spend more than 20 minutes because they tire out. So you have to let them rest—you can’t force it. Sometimes I repeat that process for over a year so I can get all the photos I need. But if it’s a rare bird, I may only have a short period of time to work with it. I photographed a Kakapo in New Zealand—it’s a really rare bird. In that situation, I flew to New Zealand, and I had a specific period of time when I could photograph him. I had to hope he would walk out of his cage. But it all varies. Sometimes I get what I need in an hour. Sometimes it takes me over a year.

A: Is there a bird you’ve always wanted to photograph but haven’t?

J: There are so many. I might be doing this till the day I die. I look at all the species I haven’t photographed and I’m kind of interested in all of them. They exist for a reason and there’s something unique about every one of them.

The hummingbirds in America are one kind of bird I would love to do a project on. We don’t have them in New Zealand, but I once saw them in the States and was so enchanted by them—they look like fairies. That would be a dream.

A: Why do you think it’s important to document birds?

J: The reason why I did this originally was because I was really falling in love with wild places and birdlife. And I was aware that the greater public wasn’t seeing how extraordinary it all is. So I thought maybe what I could do was find a way for people to connect with wildlife. If we don’t seek it out, we don’t know it exists. Humans aren't the only species on this planet—the variety is what’s extraordinary. It’s a way to grab people’s hearts and get them to think about other species, not just our own, and how we can make this planet work.

This interview has been edited and condensed for clarity and conciseness.