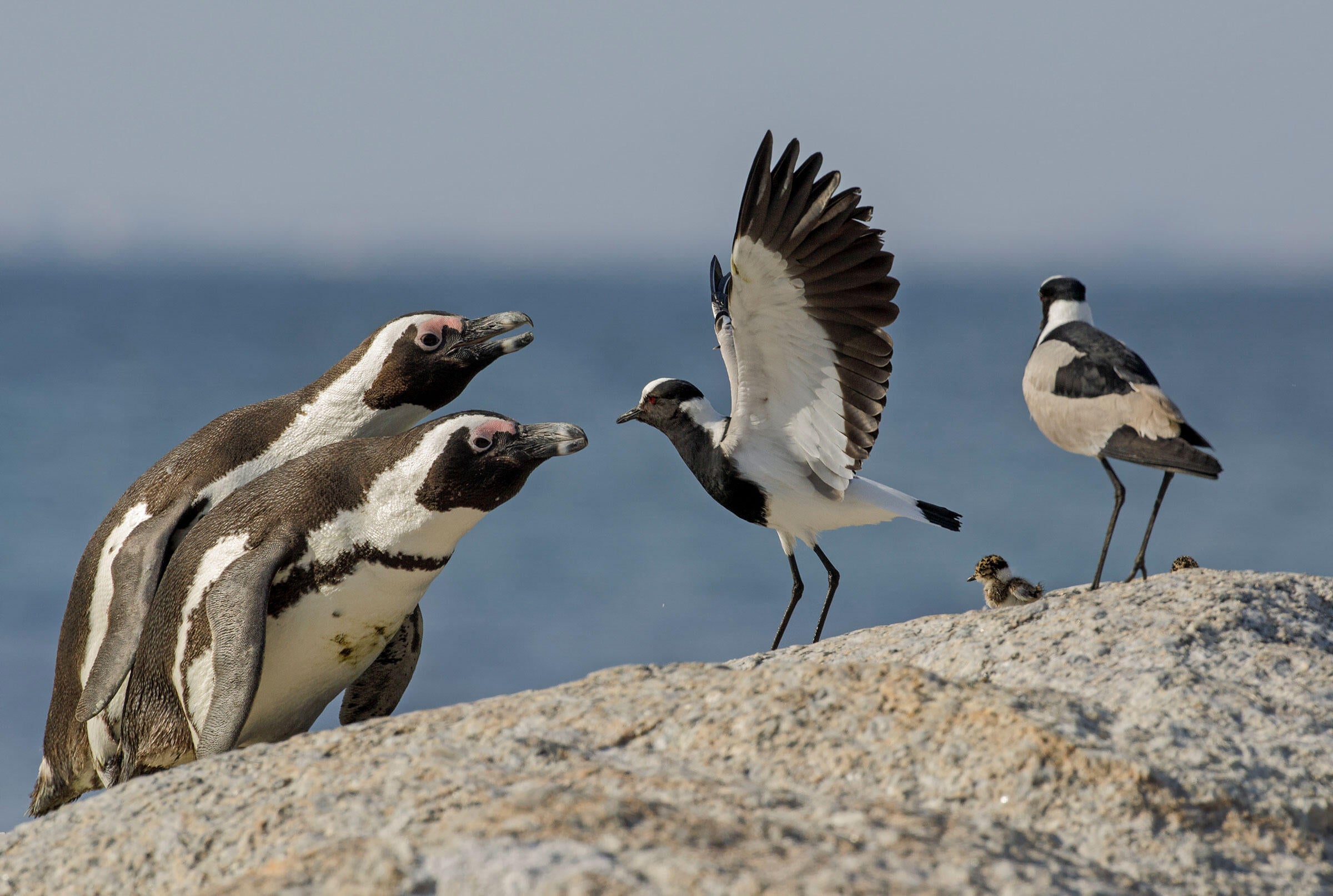 Birds don’t read books. It’s an obvious statement, but it reflects an important point: No matter how much we study and read about bird behavior, these creatures won't always do what they're "supposed to do." They'll do things that take us by surprise. This presents a challenge for bird photographers, especially those who strive for action shots. For the best chance of success, the photographer must try to predict what their avian subjects will do next—while staying alert to the possibility that the birds may do something utterly different and unexpected.

Every year in the Audubon Photography Awards, we look forward to these entries that capture unique moments in the lives of birds. Sometimes they end up as that year's winners, and other times they find their way to our annual top 100 gallery. Inevitably, though, there are always extra shots and behaviors that we want to share with our readers. So enjoy the below, and should these images leave you feeling inspired, remember that the 2020 awards are now open for entry.

When birds defend their space—whether it’s a breeding territory, or just a momentary feeding spot—they mostly focus on defending against other members of their own species or other birds that might compete for the same food source. Sometimes, though, we see skirmishes among birds that aren’t competitors, like this Blacksmith Lapwing (a type of large plover) doing an aggressive display at two African Penguins. The reason for the lapwing’s ire is revealed by the two fuzzy heads sticking up above the rock: Those are its babies. The penguins don’t actually pose a threat to the chicks, but the lapwing parents aren’t going to take any chances. 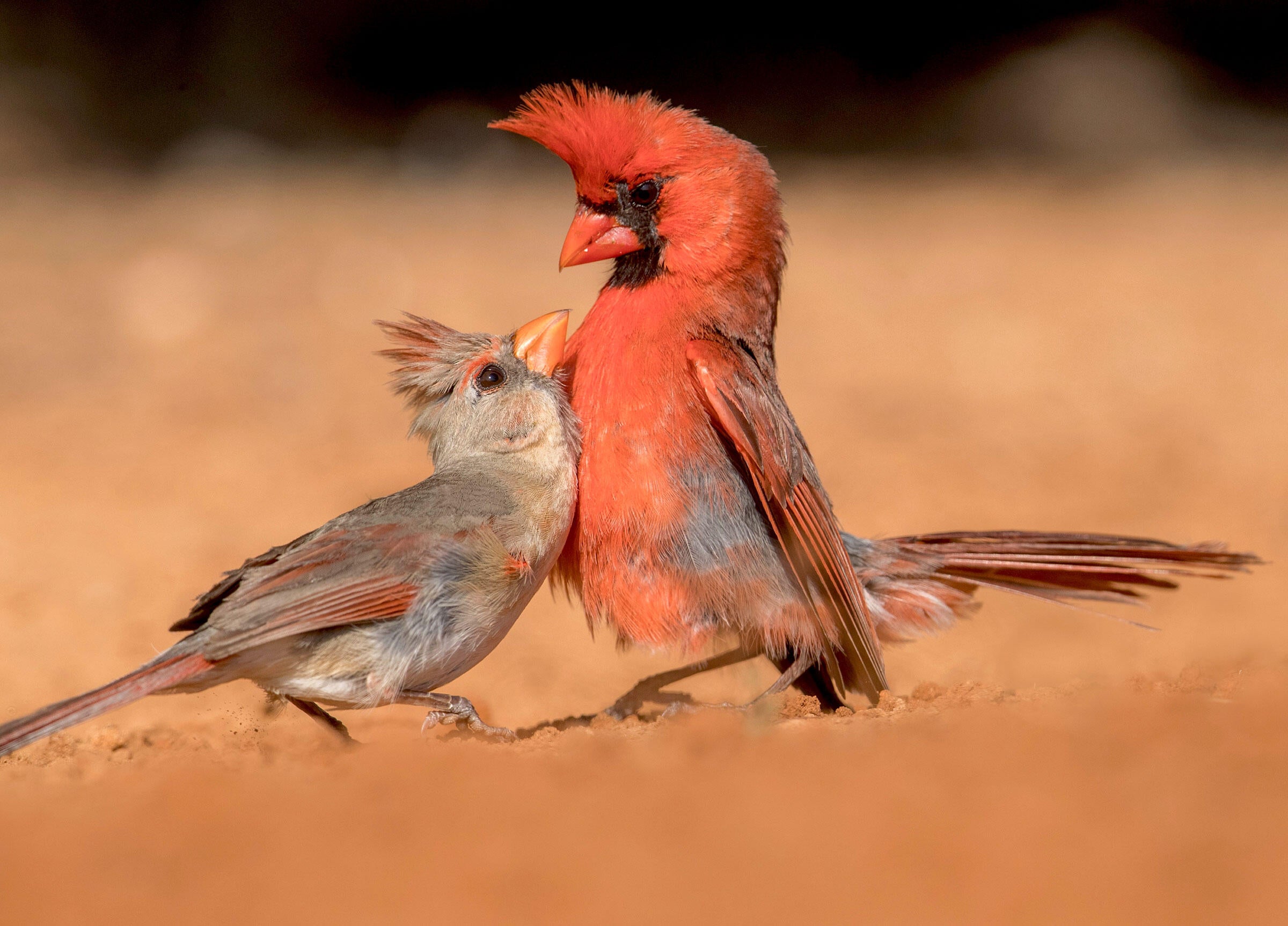 Northern Cardinals have long-lasting pair bonds. Members of a pair typically stay together at all seasons, whether they join roving flocks in winter or stick to their own breeding territories. As if to reaffirm their commitment, they act out a variety of courtship rituals any time from late winter through midsummer, posturing and displaying for each other. The male often feeds the female, offering her choice seeds or juicy insects. It’s not clear what the couple in the photo is doing, but it probably involves some avian version of romance.

Birds interact with spiders in a variety of ways. Most insect-eating birds will also munch on these arachnids when they have the chance, and a few large tropical spiders turn the tables by eating birds. But the unique qualities of spiderwebs open up more possibilities; many small birds will collect bits of webs to add to their nests. Songbirds like this female Yellow Warbler often drape strands of spiderwebs over the outside of the nest and the twigs that support it, helping to secure it in place. In most bird species, males do most of the defense of the breeding territory, and male Red-winged Blackbirds take this behavior to extremes. They will fly up to harass larger birds that venture too near—even things like hawks or herons flying over—and vigorously defend their boundaries against rival males. Territorial neighbors usually face off by singing at each other, but sometimes they come to blows, grappling in the air and continuing to fight after they fall to the ground or into the water.

The popularity of bluebirds has been a bonanza for Tree Swallows, which use nest boxes built to the same dimensions. However, since suitable nest sites are usually in short supply, there can be intense competition. Thoughtful hosts often reduce friction between bluebirds and swallows by setting up two identical nest boxes about 10 feet apart. If bluebirds occupy one box, they’ll drive away all other bluebirds, and if swallows occupy the other, they will drive away all other swallows, leaving one pair of each to nest in peace.

Shorebirds like the avocet perform a lot of stretching movements apparently just for comfort, like stretching one leg back, or stretching one wing at a time out or down. But when an American Avocet stretches both wings up above its back, sometimes it can be an “intention movement,” signaling that it’s about to fly. Avocets often do this two-wing stretch when they’re disturbed, or when they wake up from a nap, or sometimes for no apparent reason at all. 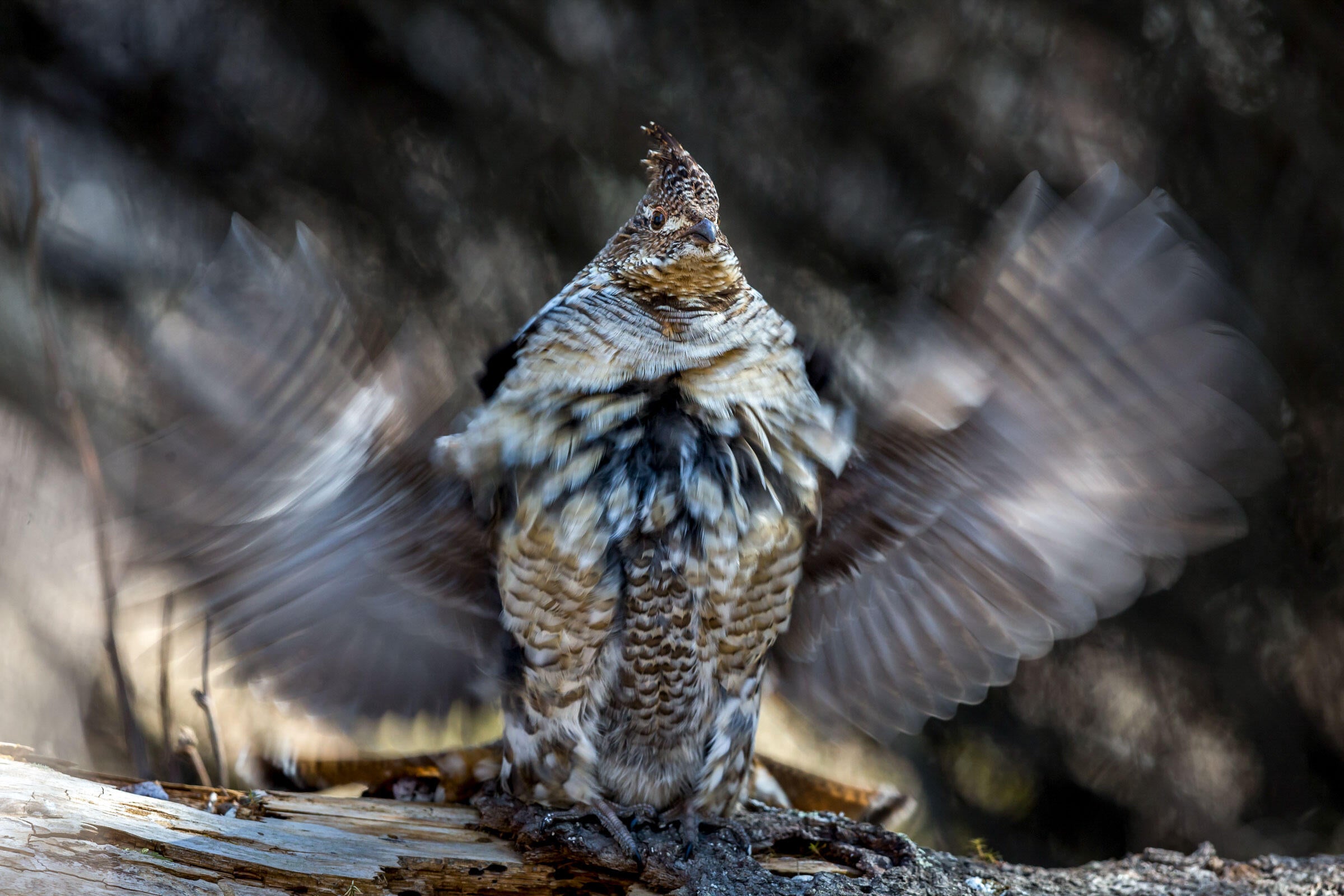 Living in dense forest, and with a relatively weak voice, the male Ruffed Grouse attracts potential mates not by singing, but by drumming. He perches on a log above the forest floor and beats his wings in a quick, snappy movement, starting slowly and speeding up to a fast crescendo. The sound is created not by friction of the wing against the air, but by air rushing into the vacuum left by the incredibly rapid backstroke of the wing. So technically, each quick thump is a small sonic boom. Northern Harrier and Short-eared Owl are not at all related—after all, one’s a hawk and one’s an owl—but they have similar lifestyles. Both favor marshes and open grasslands, and both hunt by flying low, watching and listening for rodents and other small prey. Often they live in the same places. Generally they avoid competition by hunting at different times, with harriers cruising all day and owls coming out in the evening. When they overlap they may interact and harass each other, but they seldom cause any physical harm. In this case, though, one apparently caused the other to drop its prey: that falling rodent near the lower edge of the frame.

Caracaras belong to the falcon family, but instead of plunging from the sky to strike prey, they feed mostly on carrion. While some tropical forest caracaras are incredibly noisy, the Crested Caracara is usually silent. Its most frequent calls are loud rattling and cackling sounds, often given while it throws its head so far back that the top of its head touches its back feathers. This display is usually a response to rivals or predators coming too close to its nest, or too close to a choice carcass. 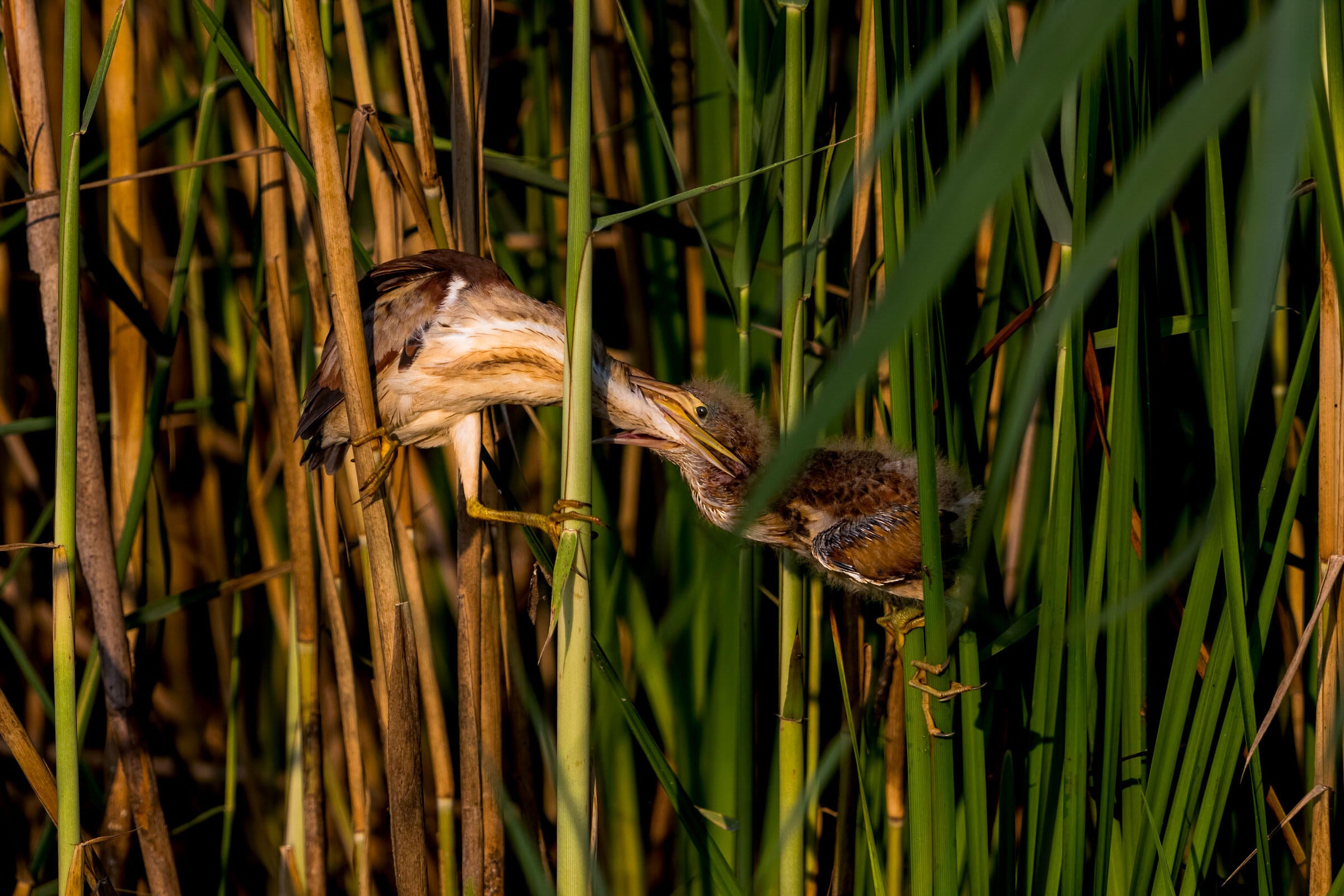 Most members of the heron family hunt aquatic prey by wading in the shallows. The tiny Least Bittern has a different strategy: It uses its long toes to grasp marsh plants, and clambers about on emergent stems above the water. Its nest is firmly attached to stems of cattails, rushes, or other plants, a foot or two above the water, and the young Least Bitterns are able to climb out of the nest into the surrounding vegetation when they are only a few days old. 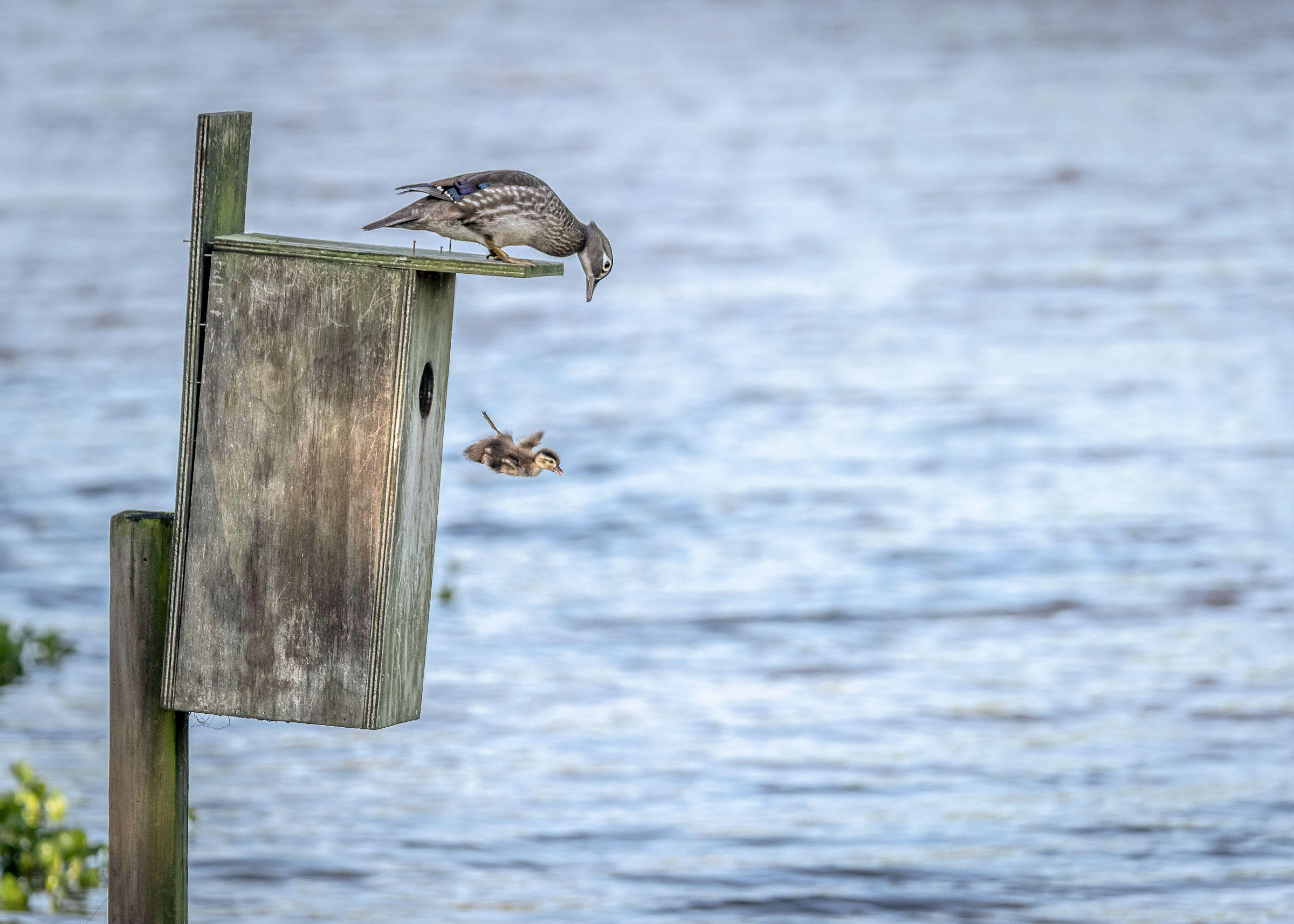 Most ducks nests are on the ground, vulnerable to predators. Wood Duck nests, placed in tree cavities or nest boxes, are much safer—until it’s time for the ducklings to leave the nest, about 24 hours after hatching. Then these little balls of fluff must clamber out of the hole and drop to the water or to the ground. Nest boxes are often just a few feet above the water, allowing for soft landings, but ducklings jumping out of tree nests may drop more than 60 feet to the ground. Fortunately, they have a natural ability to bounce.

Western Grebes are famous for displays in which they race noisily across the surface of the water, but they have other courtship displays that look more sedate. A male and female may face each other some distance apart, staring at each other and making soft trills. Then both dive underwater, coming up with their bills full of weeds. They come together and rise up, paddling with their feet to stay upright, in an aquatic slow dance that may last more than half a minute.