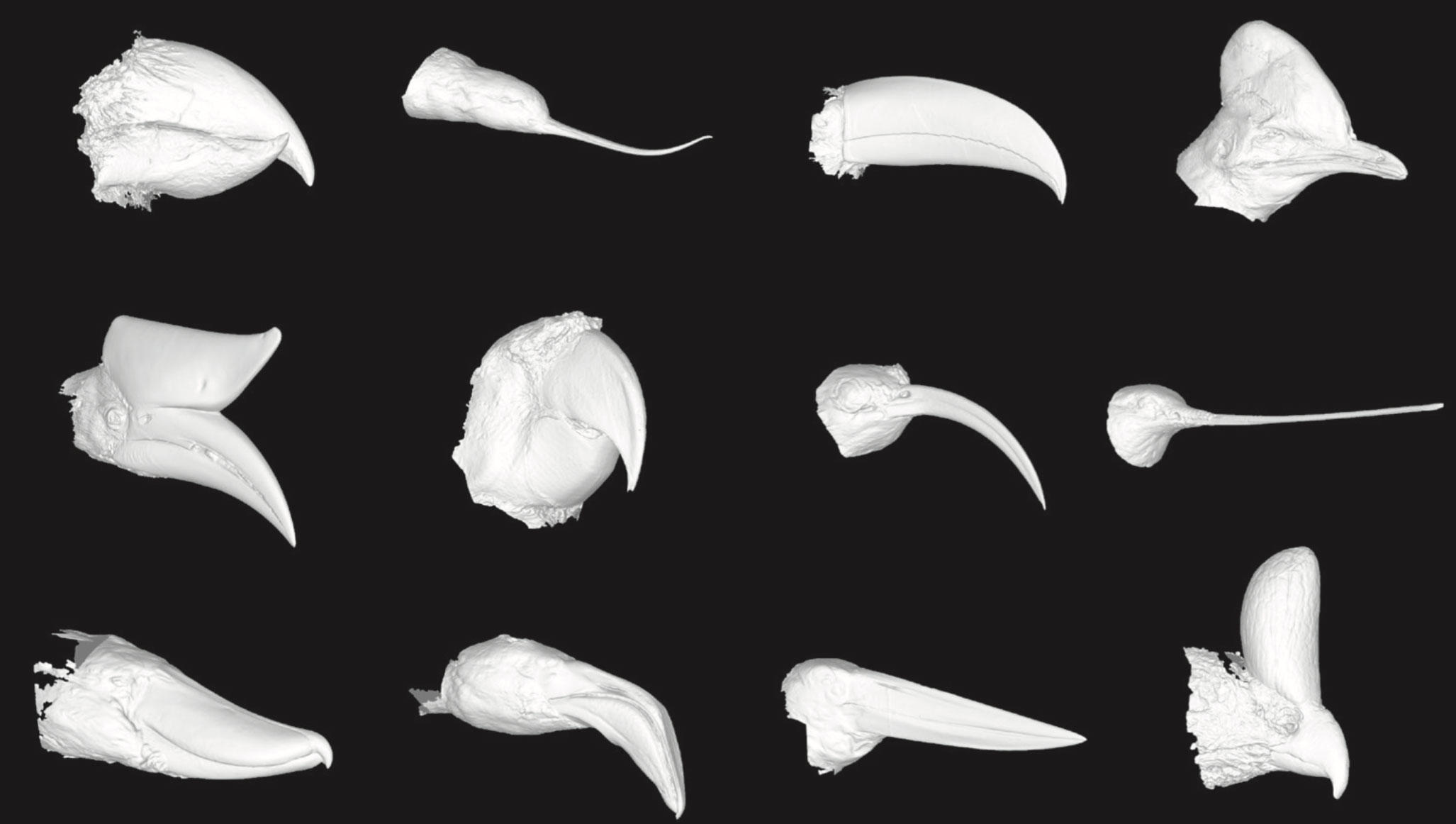 By using 3D scans of modern bird bills, scientists are tracing the evolution of beaks through their physical variations. Photo: Gavin Thomas

The variety of fantastic bill shapes we know today first came about in a sudden burst, and then slowly evolved over the next 65 million years, according to a new study.

Birds sing with them, eat with them, and fight with them: Long, needle-like projections that wrangle worms from the muck, sharp hooks that rip carrion to shreds, or sacks that gulp water and fish. Across the globe, bird bills vary widely in shape, color, and purpose. But while scientists have developed theories on how the vast diversity of beaks evolved, they never had the tools or fossil specimens needed to truly piece together the history of the bird beak.

Now, thanks to an army of citizen scientists and thousands of digitized beaks, researchers are finally beginning to map out the evolution of bills over millions of years—and the results so far have been surprising. Published this week in Nature, a new study out of the University of Sheffield shows two separate waves of bill evolution: an early bang around 65 million years ago, followed by methodical refining since then.

While scientists have long speculated about how the variety of beaks evolved, until now, there was really no way to test hypotheses due to a lackluster fossil record and old technology. For multiple reasons, the fossil record for bird beaks is “awful,” says Jen Bright, an author on the study and a paleobiologist at the University of Sheffield and the University of South Florida. Few small species, like birds, are preserved over time as fossils. Even fewer bird fossils have skulls. And any preserved bird skulls rarely have beaks; keratin, the outer sheath of beaks, doesn’t tend to fossilize in the first place.

Because of these problems, the researchers instead turned to modern bird specimens housed at two natural history museums in the United Kingdom: the Natural History Museum in Tring and the Manchester Museum. Over two years, they used 3D-scanning technology to create digital versions of the collections. Crucially, the digital scans let them examine the bills’ curvature and other three-dimensional features besides their width, length, or height. “The way people measured beaks in the past wasn’t really complete,” Bright says.

After creating the scans, the researchers sat down to mark the major points, or landmarks, on the beaks, which helped them identify similarities and differences among the specimens. Using a computer, they began marking the tip of the bill, places where the beak meets the bird's face, and its curvature, among other landmarks. But it didn't take long before they realized how much elbow grease would be required. “We did some back-of-the-envelope calculations and realized there’s no way we can do this on our own,” Bright says.

So the researchers decided to make a call to the public by creating a citizen science website, Mark My Bird, to use outside help in marking their massive database. On average, three people marked each beak, enough people to avoid major errors. Bright says the biggest contribution came from a group of super users, one of which marked the bills of 1,400 species. The researchers then mapped the beaks onto several different bird phylogenies, or family trees, to trace when new shapes first appeared and how they changed.

Many modern bird beaks first evolved like a fireworks display.

They found that many modern bird beaks first evolved like a fireworks display, Bright says. Out of nowhere, a few bird species evolved into many—as if they “shot off and popped at the end,” she says—creating branches and twigs of the phylogenetic tree. It was a time of intense variety and evolutionary innovation, when new familial groups of birds popped into existence and novel bill types appeared with them.

“It was a similar process to Darwin’s finches,” says paper author Chris Cooney, an evolutionary biologist at the University of Sheffield. “Not just in tens of species, but in tens of thousands of species.”

The researchers then traced the beak family trees backward in time and found that the event likely happened 65 to 80 million years ago. If the event occurred closer to 65 million years ago, the diversification would line up with a Late Cretaceous mass extinction event that killed off three-quarters of the plants and animals on Earth, including the dinosaurs, says Bhart-Anjan Bhullar, a paleontologist and developmental biologist at the Yale Peabody Museum of Natural History, who was not involved with the study. That mass die off could have led to a “free for all,” Bhullar says, when birds were able to access new food sources and habitats once dominated by other species. Such a dramatic change would have hastened bill evolution.

Recognizing this theory as a possibility, the study's researchers are more conservative in their speculation. Bright says that scientists can’t be sure that dinosaurs and ancient birds would have even competed for the same resources.

After the initial big radiation event, the rate and form of beak evolution changed. Instead, species “refined and subdivided,” Cooney says, and in this period, smaller changes were made to bills. The researchers believe this slowdown occurred after different groups of birds established their roles in the environment. This later evolutionary process fits more with the idea that evolution moves slowly over time in relation to environmental pressures.

The results are already fascinating, but the group's research continues. Citizen scientists can continue to mark bills on their website, as only half of all 8,000 uploaded species have been marked so far. (This study looked at more than 2,000 species.) And the researchers have plenty more questions to address when they plunge back into the data. Cooney says avenues of inquiry could include how particular groups of birds evolved their bills, like parrots or pelicans, or how bird bills evolved in particular places, like on an island as opposed to a continent. Who knows—maybe they'll even provide some insight into Darwin's finches, the bill evolution story that started it all.