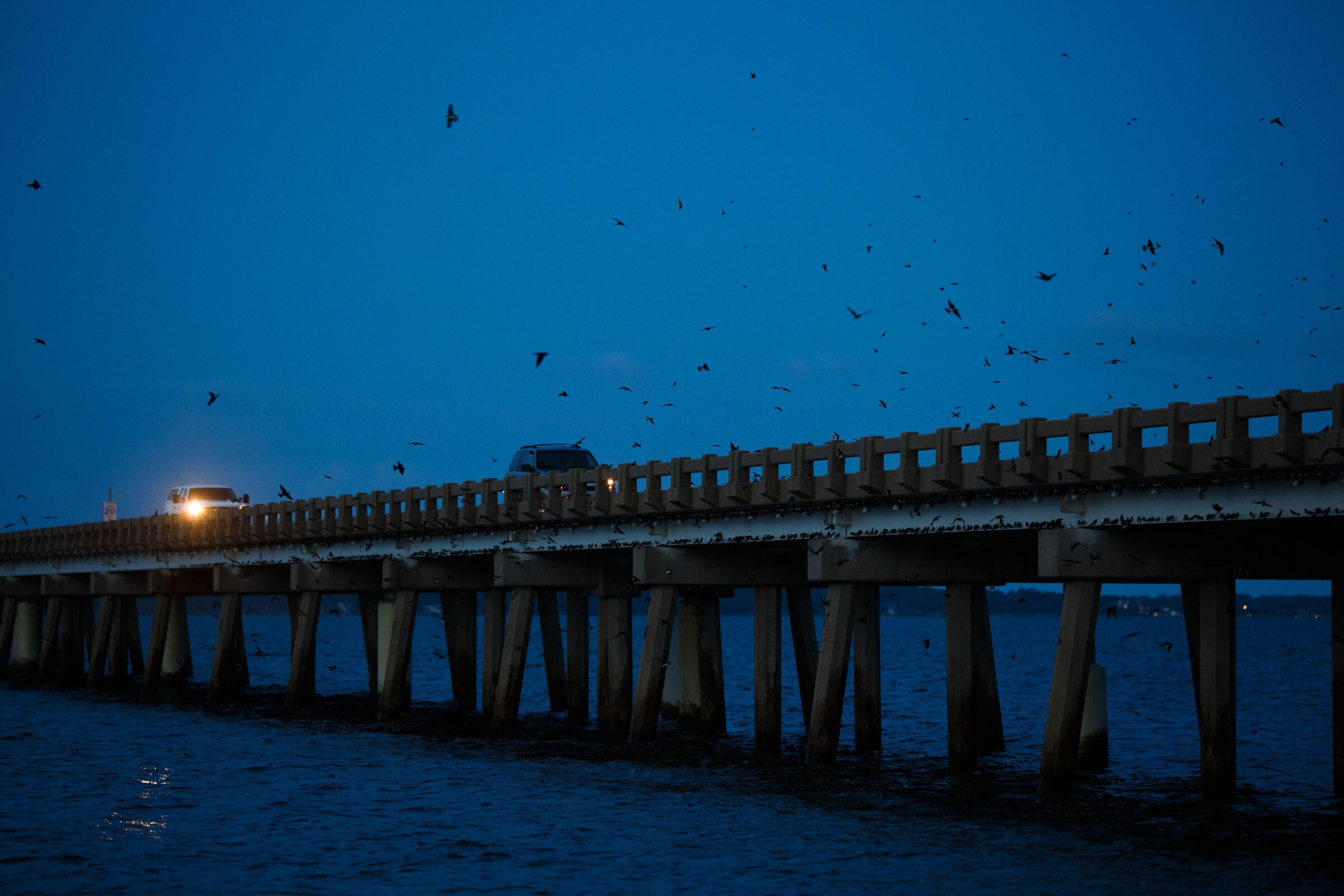 Cars slowly cross the William B. Umstead Memorial Bridge on the Croatan Sound near the Coast of North Carolina as thousands of Purple Martins return to roost for the night. Photo: Eamon Queeney

A Biologist's Bittersweet Return to See the Birds She Helped Save

Alisa Esposito made it her mission to protect Purple Martins from deadly collisions on a North Carolina bridge. When personal tragedy struck, the birds helped her through the ordeal.

As the sun was setting in North Carolina’s Outer Banks one summer evening in 2001, Alisa Esposito and her husband, Christopher Lucash, zipped along with the traffic heading over the William B. Umstead bridge, where the speed limit was 55 mph. Suddenly a mass of birds swarmed over the two-lane span, and the pair watched in horror as a van in front of them drove full speed into the flock.

Esposito and Lucash pulled over to inspect the casualties. “Every set of headlights that would go by would throw more birds at our feet,” she recalls.

Each dead or injured bird they saw was a Purple Martin. Esposito and Lucash, both wildlife biologists who had moved to the area two years earlier, had a soft spot for the birds. When they had moved into their home in Columbia, they’d found a Purple Martin box a previous owner had left in the backyard. Lucash fixed it up, and the indigo-hued birds took up residence in the spring of 2000.

It was possible that some of the broken birds littering the road had come from their backyard. When Purple Martins arrive in the area in spring, they nest primarily in man-made boxes like the one Lucash renovated. Come early July, adults and their young vacate their springtime digs, and tens of thousands relocate to the underside of the William B. Umstead bridge. They sleep there at night for about six weeks, spending their days fattening up before winging it to South American lowlands for the winter.

Locals have observed Purple Martins roosting at the William B. Umstead bridge for at least 40 years. After witnessing the massacre that night in 2001, Esposito vowed to safeguard the birds. It was the beginning of a quest to convince officials to lower the speed limit during the short period when Purple Martins inhabit the bridge. Through the effort Esposito developed a deep appreciation for the graceful aerialists, and helped others see the benefits of protecting them, too. And when personal tragedy struck, the birds, in turn, helped Esposito through her uncertainty and loss.

Purple Martins, our largest swallows, evolved to nest in abandoned woodpecker cavities, crevices in cliffs, and other natural holes. As humans have spread and altered the landscape, the resilient birds have adapted, building their nests made of twigs, mud, and grass in traffic lights, building facades, and birdhouses created especially for them. While they still make use of natural cavities in the western United States, they now almost exclusively depend on human-supplied nest boxes in the East.

Backyard boxes make excellent homes for young families. But they also can make the birds easy targets for predators. “The same human habitats that martins so much prefer have also created really good environments for Cooper's Hawks that prey on the martins,” says Charles Brown, a biologist at the University of Tulsa who has studied Purple Martins.

The ledge under the William B. Umstead bridge provides a safer place for parents and their young to roost—at least when it comes to predators.

Purple Martins fly out from under the bridge at dawn, spend the day feeding on flying insects like wasps, flies, beetles, and dragonflies, and return to their roosts at sunset. In an unfortunate twist, the birds follow the same schedule as humans who use the bridge to commute to work and tourists out on excursions in the Outer Banks. Thick masses of birds and zooming vehicles resulted in the deaths of thousands of birds during peak roost times.

A look at thousands of Purple Martins. Video: Eamon Queeney

Esposito and Lucash turned their anguish into action, teaming up with other concerned community members, like Michael Gery, a dedicated birder, to stem the slaughter. “It didn’t take long for us to get together and say, ‘This is a project we can work on together,’” he says.

In 2006 Esposito, along with others, formed the Coastal Carolina Purple Martins Society (CCPMS), an advocacy group dedicated to protecting the annual roost at the William B. Umstead Bridge. They took their concerns to the North Carolina Department of Transportation. It wasn’t supportive at first.

The group redoubled its efforts to raise awareness about the problem and gather data on how many birds, which are protected under the Migratory Bird Treaty Act, were being hit. Esposito created educational presentations about Purple Martins, and hired an intern to conduct mortality surveys on the bridge at sunrise and dusk. In about a one-month span in 2005 alone, 3,600 birds were killed.

In 2007, the NCDOT took action. It installed a large sign that says: “LOW FLYING BIRDS. SPEED LIMIT 20 WHEN FLASHING. DUSK AND DAWN”. CCPMS monitors when Purple Martins start to amass at the bridge. “When the activity reaches a point where it becomes a safety hazard for traffic and for birds, I notify the NCDOT that it's time to set up the lights,” says Gery. 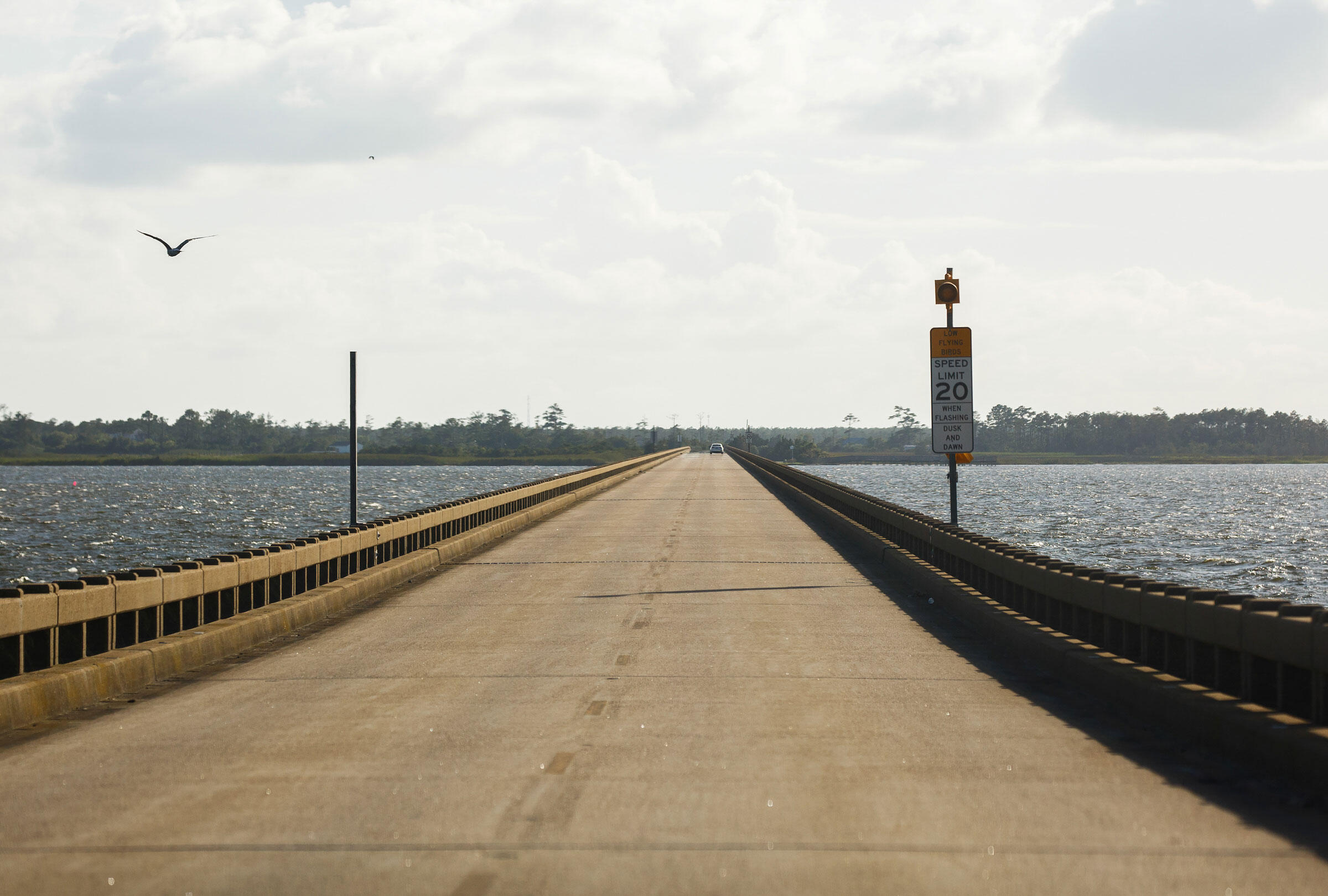 Installing speed-limit signs that flash when Purple Martins are roosting on the William B. Umstead Bridge has significantly reduced the number of birds killed by cars. Photo: Eamon Queeney

The simple solution has dramatically decreased Purple Martin deaths. The group still finds a few injured or dead birds, says Gery, but it’s nothing compared to the daily massacre that used to occur.

CCPMS didn’t stop there. They worked with tourism and government agencies to build an observation pier in 2009 for optimal roost viewing, and installed a kiosk with information about the birds. CCPMS has become the go-to source for Purple Martin information, both regarding the roost site at the bridge and how homeowners can attract and maintain a colony. When the birds are in residence at the bridge, they lead sunset boat tours to which locals and tourists alike flock.

“I've noticed that there seems to be this trend for motorists to drive over to the roosts and watch the activity from their cars,” he says. “People love these birds.”

After the sign victory, Esposito continued leading tours and doing educational outreach, and she and her husband enjoyed the majestic purple birds that made their backyard their home. Their children developed an interest, too—Esposito says she’ll never forget when the entire family helped feed a flock of famished birds that arrived in the middle of a Nor’easter, flinging crickets from spatulas for them to catch in their yard.

“It’s just the most joyful thing to see them and help them and know that otherwise, they were not going to make it,” she says.

In 2013, Esposito noticed that her husband was beginning to limp. Suspecting Lyme disease, they went to a doctor who was unable to diagnose his symptoms. For two years he suffered from pain, had difficulty walking, and underwent back surgery. He continued to decline.

During the uncertainty, Esposito found herself drawn to the bridge at sunset. She thought about her husband, who’d worked on reintroducing the red wolf for 29 years, who was known for his energy and spirit in the field, and who, she says, was her “rock.” She thought about how he might never walk again, how frail his body would become. These thoughts intersected with that of the broken bodies of birds she’d taken off the bridge, their fragile bodies in her hands, and all of the unnecessary death. She meditated on that “brokenness,” as she puts it, and what she’d learned through the experience of taking care of the birds, and resolved that, while she couldn’t heal her husband, she would be strong for him and their children.

In 2015 Lucash was diagnosed with amyotrophic lateral sclerosis, or ALS, a debilitating neurological disease that affects the brain and spinal cord. They family moved three hours west to Pittsboro, North Carolina, a month after his diagnosis, leaving behind their Purple Martin family.

Lucash returned to Columbia with their daughter to gather the Purple Martin houses from their yard, in hopes that they could attract the birds to their new home. But Esposito couldn’t bring herself to return to Columbia. It reminded her too much of her husband’s decline.

“I determined that I would not move east again,” she says. “I was just so angry, I wanted nothing to do with that part of the state.” 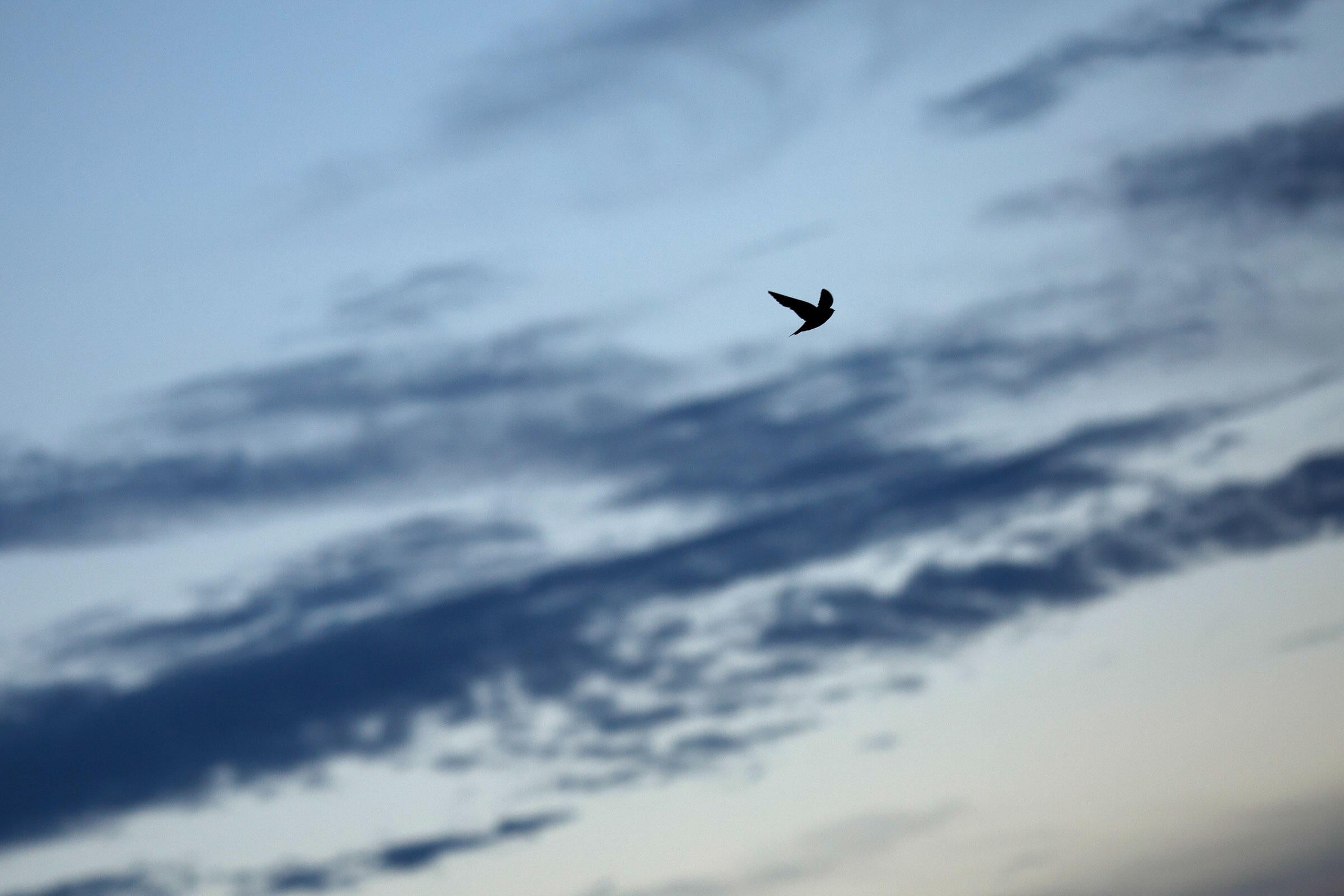 A Purple Martin returning to the roost on an August evening. Photo: Eamon Queeney

Lucash died in 2016. Esposito and her children stayed in Pittsboro, and she began working at Sparkroot, a teaching farm. Esposito thought often about the birds and wondered how they were faring, but she just couldn’t go back. She’d given her last Purple Martin boat tour in 2014 and said goodbye to CCPMS the following year when she moved.

This year, though, Esposito was compelled to return to the bridge and see the birds. “I just want to be with them again,” she said, a few days before returning to Columbia to once again lead a CCPMS Purple Martin boat tour. “There is a strength there.”

On a warm evening in August, Esposito stood on the steps of the Crystal Dawn boat, passing out pamphlets as people climbed aboard. As the boat left the dock, she took her place at the front of the boat to lead one of the four cruises CCPMS hosts during the summer. Of the roughly 90 people on the boat, some were new faces, but many were diehards who had been attending the cruises since they began a decade ago.

As the sun began to set, she began telling her eager audience about the Purple Martins that would soon return to their roosts, their swirling forms against the pink-hued sky creating a scene reminiscent of an impressionist painting. She described the birds’ natural history, and the efforts of the CCPMS to protect them from cars passing overhead.

“It feels good to tell that story,” she says, “and it’s really still going so well.”

The trip, says Esposito, gave her the closure she was hoping for. As for returning to do another tour, she isn’t sure. But she takes comfort in knowing that the Purple Martins she and her husband worked to safeguard will return year after year, raising their young and dazzling human spectators as they perform their elegant acrobatics as dusk falls on summer nights.