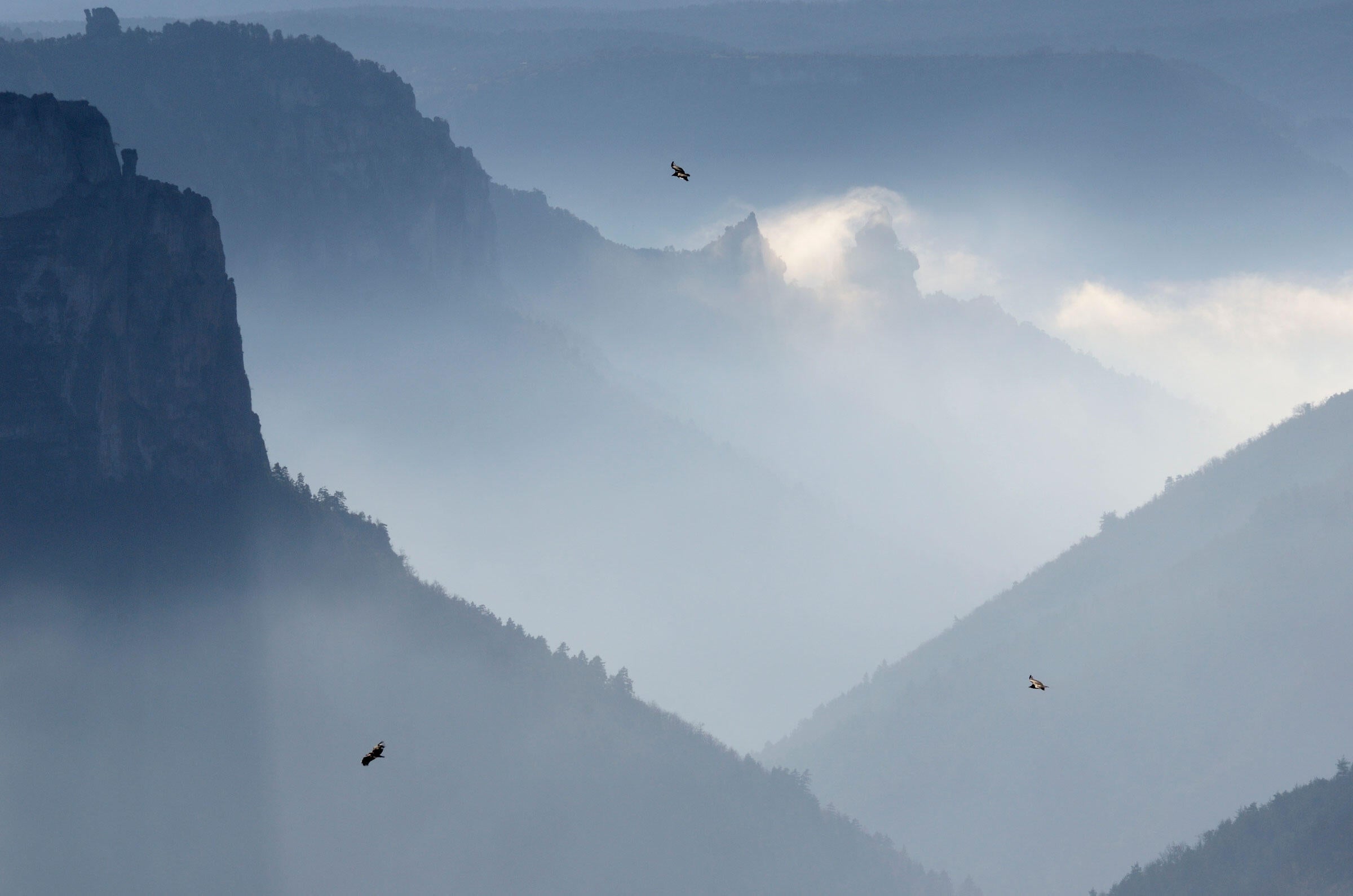 A Closer Look at How Vultures Lazily Circle in the Air

Scientists make a wish every time they fix a tracker to a bird before a long flight. The small devices are the best way to keep tabs on a bird’s flight patterns, but there’s no guarantee that the equipment—or its owner—will weather the journey.

Hannah Williams and her colleagues at Swansea University in Wales don't have this problem. That's because the team tracks captive Griffon Vultures in France for just six hours a day and studies them for short bursts—three and a half minutes to be exact—to learn how the birds maximize their time in the air using thermals, spirals of hot air that waft off land. Before takeoff, they outfit each subject with a tiny “Daily Diaries” backpack. These devices measure the vulture’s orientation and acceleration, along with the surrounding air speed, pressure, and temperature. By logging 40 readings a second, the backpacks send more than 8,000 data points to the team's receiver in a typical thermal ride.

All of this data gives Williams and her crew new insight into how exactly birds navigate the airwaves. Thermal riding requires precise body positioning to stay in the sweet spots that let vultures and all other raptors soar without flapping—a debilitating energy drain. By assembling and interpreting the readings, researchers can map out the bird’s midair choices, down to every last switch in direction. A deeper understanding of how raptors play the currents means even more now that the wind-energy market is expanding. The whirring blades of turbines may alter natural landscapes in ways the research community doesn’t quite yet understand, Williams says. If thermals are disrupted, the already-struggling species that rely on them might be in deeper trouble.

The below graphic made by Williams' team appears in the new book Where the Animals Go, which highlights the creative ways researchers tell data stories pulled from the latest tracking technology. “We were keen to get a good balance of land, sea, and sky,” says James Cheshire of how he and his coauthor Oliver Uberti decided what maps to include. “And sky was a big part of that.” Every other avian pathway the two chose involves long treks and desperate hopes; but the vultures’ spirals stood out to them. To think that technology has come so far that it can paint a complete picture of a bird’s needs with just a few minutes of data—that’s inspiring, Cheshire says.

How to read this graphic: A Griffon Vulture’s ascent, recorded in June 2013, is shown above. Colors track air-temperature changes as the bird sails on a thermal, up to a vantage point of 2,200 feet. This lofty view allows the raptor to scout out carcasses to scavenge. Though the currents the bird is flying on are tornado-shaped, the size of the loops are adjusted here to be the same width, emphasizing directional changes. Typically, thermals are small and weak near the ground, forcing vultures to keep turns tight [1]. As the thermals heat up, they get larger and give the bird more room to move [2]. At the thermal's end, the bird sails off in search of the next ride [3]. Wiggly lines or overlapping circles indicate the vulture is struggling to stay on the thermal and in flight, Williams explains.