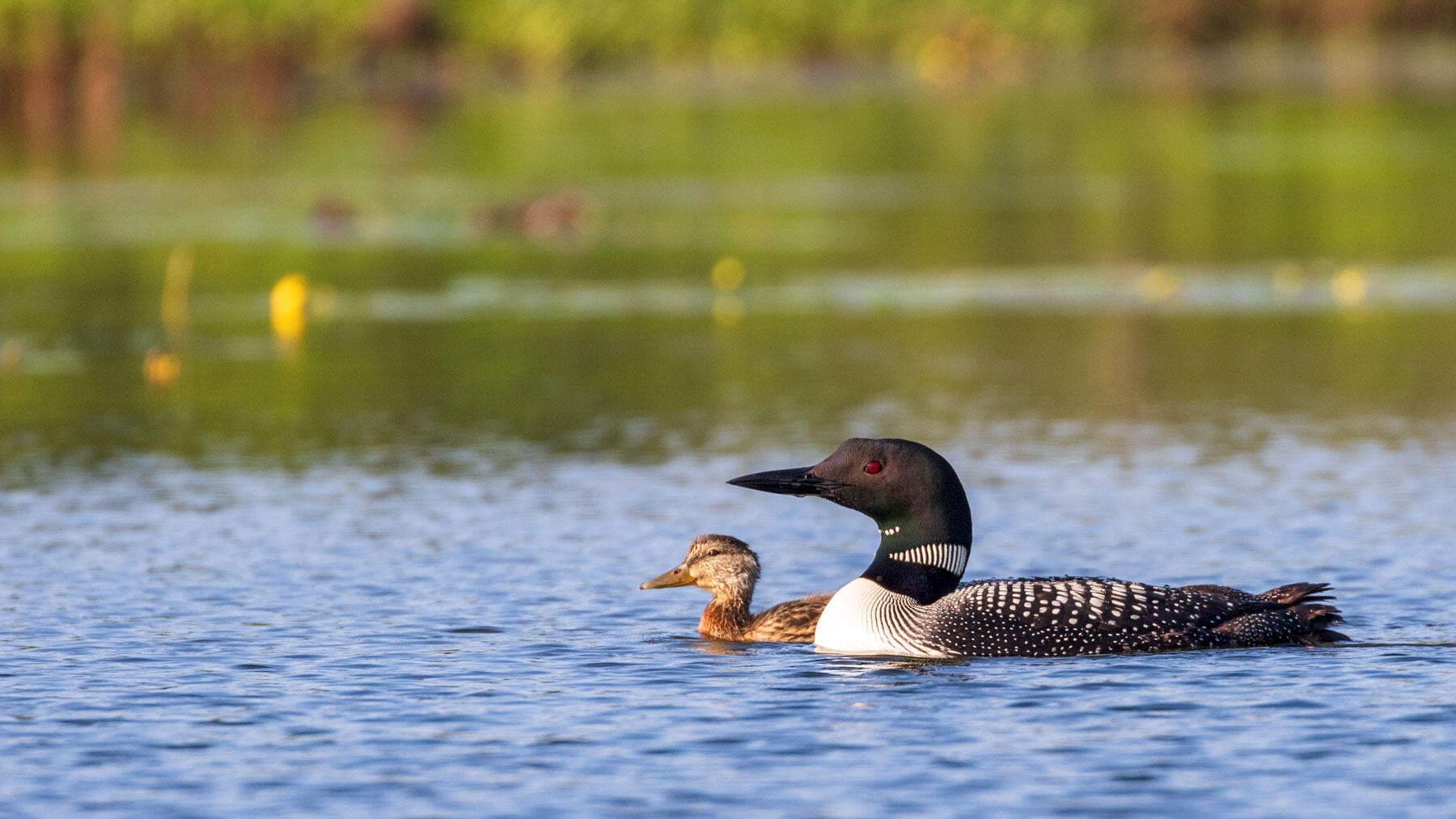 A Common Loon and its mate have taken a lone Mallard duckling under their wing in Wisconsin. Scientists tracking the non-traditional family have uncovered some novel behaviors during the young bird's development. Photo: Linda Grenzer

Scientists discovered the surprising bird family on a Midwestern lake, and so far, all parties seem to be getting along swimmingly.

College student Evelyn Doolittle couldn't wait to see her first Common Loon chick. An empty eggshell sat in the nest she’d been helping to monitor in Northern Wisconsin—and when she looked out on the lake, she spotted a downy baby accompanied by a pair of adults. But something seemed off. This newborn had lighter plumage and not so much of a stubby bill. When Doolittle's colleague Elaina Lomery returned to the site 10 days later, she realized that the little bird was no loon. It was a Mallard.

A month later, that duckling is still clinging to its adoptive parents, getting fed the occasional fish, resting atop their backs as a loon chick would, and even diving. Though Common Loons have been seen tending to other waterfowl, this example is a surprising relationship between rival species with vastly different foraging strategies.

“Loons invariably try and drive off mallards when they see them on the water; they’re kind of enemies,” says Walter Piper, professor of biology at Chapman University in Orange, California, and director of The Loon Project, which studies the species on nearly 200 lakes in Northern Wisconsin. “It’s exciting and bizarre to have a Mallard raised by loons."

When Doolittle visited the nest back in June, she says she only found fragments of a loon egg. That indicates that the pair likely lost its original chick to the forces of nature, and came across a young Mallard that had gotten separated from its parents at the same time. Rather than attack this lost duckling, the adult loons decided to care for it as if it were their own.

The family seems to have found the perfect balance between the loons’ parental instincts and the Mallard’s needs. The duckling rides around on the adults’ backs, despite being close to half their size at this point. The loons, meanwhile, dote on it with fresh fish. While the Mallard-duckling diet doesn’t typically include seafood (they feast on invertebrates and plant matter on the water’s surface), this chick has happily accepted smaller catches from its mother—but turned down larger prizes from its father.

The duckling has even attempted to dive underwater like a loon. “It’s pretty cool—and rare—to see an interspecifically fostered bird appear to learn a foraging mode from the parents . . . one that its own species does not exhibit,” Piper says.

So far, the transferral of behavior is a first among documented loon-duckling pairings. One 1978 report details five young Spectacled Eiders accepting food from their adoptive Arctic Loon parents in Alaska. In 2016, a pair of Common Loons in British Columbia made headlines when they adopted a goldeneye. But both Spectacled Eiders and goldeneyes dive to fish in adulthood, making this latest case more notable.

The leisurely rides, on the other hand, are more true to the Mallards’ nature. “They’ll loaf around on the shore and take a couple of siestas a day where they’re not in the water,” says Steve Cordts, a waterfowl specialist at the Minnesota Department of Natural Resources. The loon’s back “is a perfect loafing platform.”

With only a few weeks left before the Wisconsin duckling molts and fledges, the question remains: Will this chick grow up thinking it’s a Common Loon? Experts say it’s unlikely.

“It will still probably figure out that it’s a duck,” notes Lori Naumann, an information officer for the Nongame Wildlife Program of the Minnesota Department of Natural Resources “It’s going to seek different habitat, and eventually, its food source will change to plant matter.” Plus, Mallards are abundant enough that this one will have no problem finding more of its kind.

Still, there might be some bumps along the way as the bird hits reproductive age, says Piper from the Loon Project. Not only does imprinting determine who the duck thinks its parents are—it can also teach the duck what its mates should look like. “It would be very surprising if this duck were to form a notion that a loon was a suitable mate, but your guess is as good as mine,” Piper adds.

Piper, Lomery, and Doolittle plan to keep tabs on the family through the summer. Aside from turning up curious behaviors, their monitoring efforts also help further Common Loon conservation. The species is already threatened by boaters and lead tackle, development on the shores where they build their nests, and climate change, which is causing their range to shift northward. With all these hurdles, Piper says spending energy raising a Mallard chick isn’t much of a net win.

Regardless, the diving loon-duck from Wisconsin has defied scientists’ expectations. Who knows what baffling new behaviors it might pick up next.