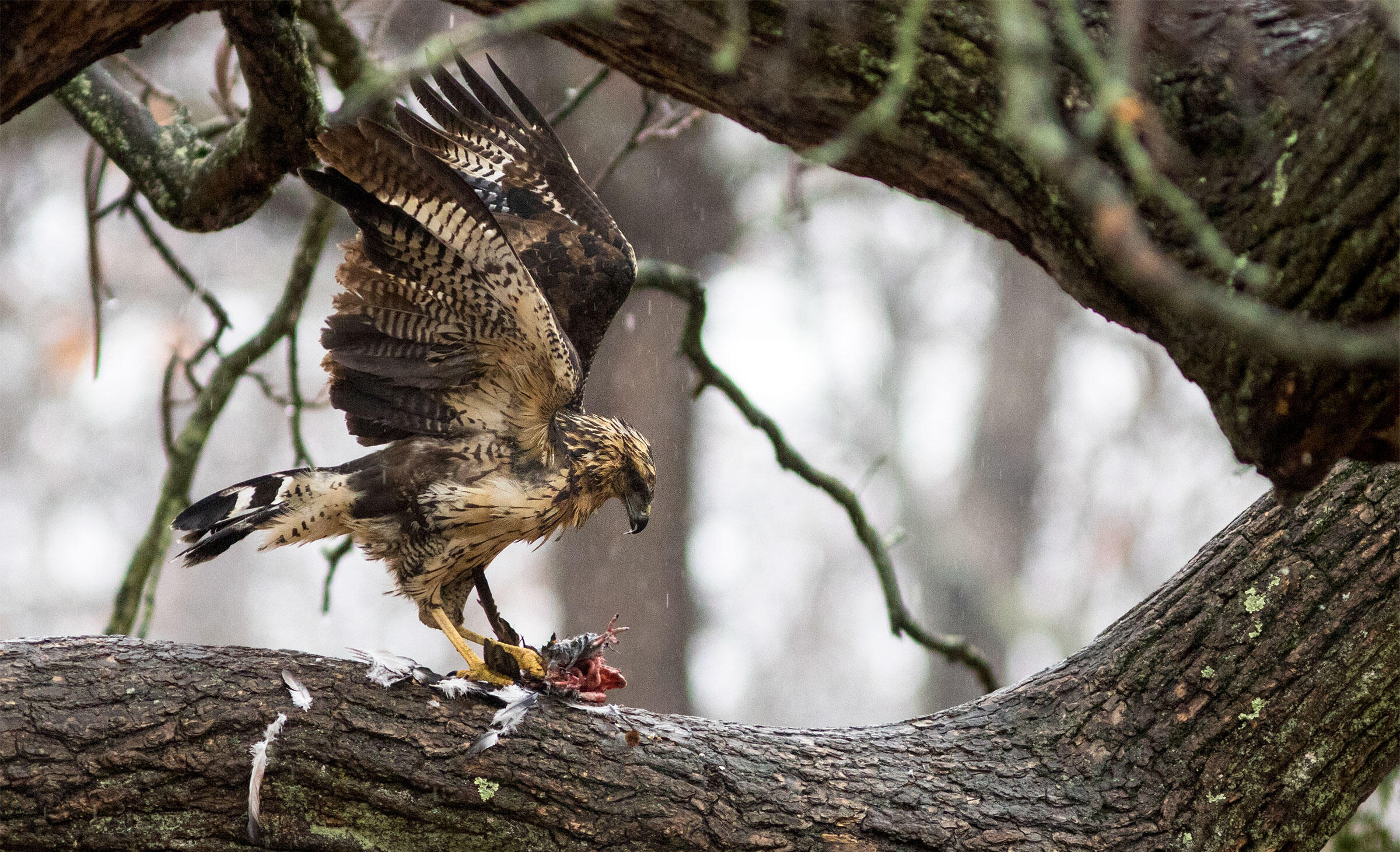 A Mexican Hawk in Maine Has Somehow Survived Two Snowstorms

Hundreds of people have visited the first wild Great Black Hawk to venture into the United States, where it's dining on squirrel instead of lizard.

On a brisk Maine afternoon, amidst dog walkers and families pushing strollers, a semi-circle of people with craned necks congregate in one corner of Deering Oaks Park. Through binoculars pressed to upturned eyes, they earnestly search the crowns of trees, pointing and consulting in hushed tones as more onlookers join the growing crowd of about two dozen.

“Oo, oo, there it is,” says a man from Vermont who is in town for business and currently on his lunch break in this 55-acre park in Portland, Maine. He power-walks to a nearby Norway spruce and looks up.

A newcomer to the clump of people asks, “Have you seen it?” as he whips out his binoculars. There’s no need to explain what “it” is. Everyone is here to see the same thing: A neotropical Great Black Hawk, the first wild individual of its species ever spotted in the United States.

With a home range that spans from South America to Mexico, this long-legged raptor typically spends its days wrangling snakes and lizards in tropical forests and wetlands. Nobody had ever reported a wild one in the United States until last April, when birders found a juvenile perched and then soaring over South Padre Island, Texas, mobbed by Laughing Gulls, according to an eBird report.

The bird had distinct brown flecks on its underwing feathers—markings shared with the Maine bird, indicating that it’s that same individual. But nobody can rationalize why this non-migratory bird would venture more than 2,000 miles from its northernmost range in Mexico to southern Maine. “It’s essentially rewriting what non-migratory raptors can do,” says Doug Hitchcox, a naturalist with Maine Audubon.

The hawk first made its unlikely Maine debut in August when birders spotted it in Biddeford Pool, a coastal town 25 miles south of Portland. It disappeared several days later, denying many disappointed birders a chance to see such a rare vagrant. So when the hawk reappeared in this easily accessible public park on November 29th, birders sprung here from around the country, some from as far away as Georgia and California.

“If Roger Tory Peterson were still alive, this is a bird he would come up to see,” one man says to justify his comparatively short five-and-a-half-hour drive from upstate New York. Beyond a satisfying check off a life list, the opportunity has also sparked unexpected reunions for some birders, including one retired couple from Philadelphia who serendipitously arrived on the same day as a friend they met on past American Birding Association trips. 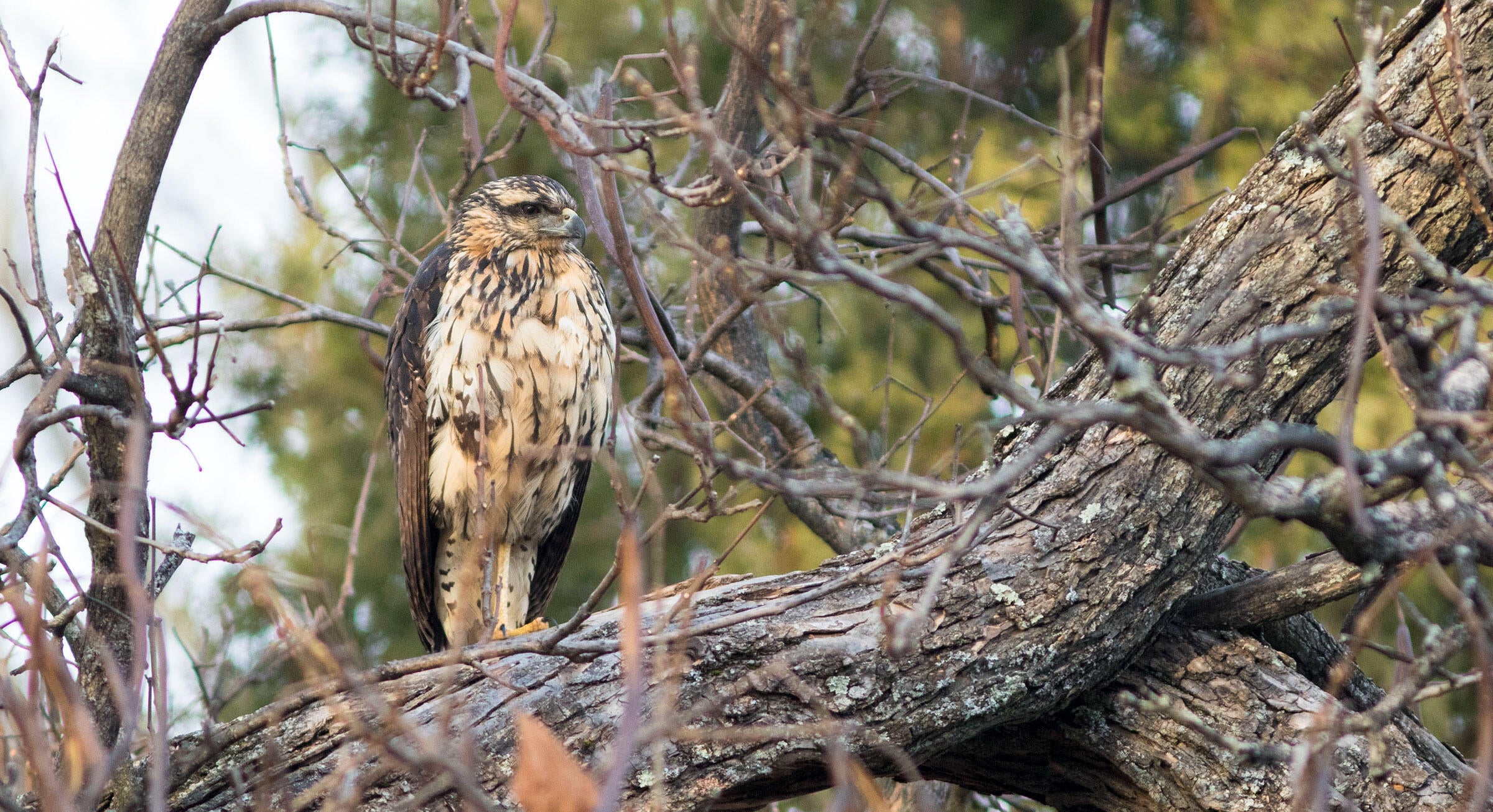 The hawk has since persisted in a seemingly stable condition through frigid temperatures dipping as low as 7°F and two snow storms of up to six inches. Fortunately, this species has a generalist's diet, and so the bird has been feasting on squirrels and Rock Pigeons nearly daily, sometimes taking advantage of frozen roadkill or prey already killed by a local Cooper’s or Red-tailed Hawks. Its feathers seem to keep it adequately warm, and it is even molting—a sign of good health, Hitchcox says.

As birders have flocked to the park—at first in droves of hundreds and now in slow-but-steady trickles that ebb and flow throughout the day—many have wondered how the vagrant will fare through Maine's long winter. “It’s going to come down to food availability, whether the bird survives or not,” Hitchcox says.

To the delight of some lucky birders, the Great Black Hawk has also officially landed on this year’s annual Christmas Bird Count list.

To the delight of some lucky birders, the Great Black Hawk has also officially landed on this year’s annual Christmas Bird Count list, says Hitchcox. But the bird’s journey to Maine has stirred up excitement amongst non-birders, too. Regional newspapers are calling the bird a “Maine celebrity,” and murmurs of “black hawk” arise from conversations between strangers on the street. One non-birder friend has gone to view it six times. “It’s just so special,” she says.

Hitchcox has actively engaged locals in the experience, including students at King Middle School, which is conveniently located across the street from the park. The first day the hawk appeared, he texted teachers to let them know that he would have a viewing scope available for students to use in-between classes. The majority of students have taken him up on the offer, he says. He has also helped residents of The Iris Network, a nearby organization for people with visual impairment, experience the bird non-visually by listening for crows mobbing and gray squirrels fussing as the hawk flies by. “It’s so cool to get such a diverse audience to appreciate this bird,” he says.

The raptor is technically not the first of its species ever to appear in the United States, says Louis Bevier, assistant editor of Birds of North America: A small population thought to have been brought here in captivity has lived in South Florida since the 1970s. But this individual, with feather patterns distinct from those Florida birds, appears to be the first natural vagrant of its species, and its tail patterns suggest it belongs to the Mexico population, Bevier says.

Hitchcox, who has visited the park nearly daily since the hawk arrived last month, says the buzz around the scene is almost as enjoyable as actually seeing the bird itself. “It has now turned into the excitement of being in the park and getting to talk to hundreds of people that have come through,” he says.

But he’ll never forget that feeling of seeing it the first time, the same feeling that lures so many birders from afar. “That’s one of those emotions you wish you could bottle up and take a sip of daily,” he says.