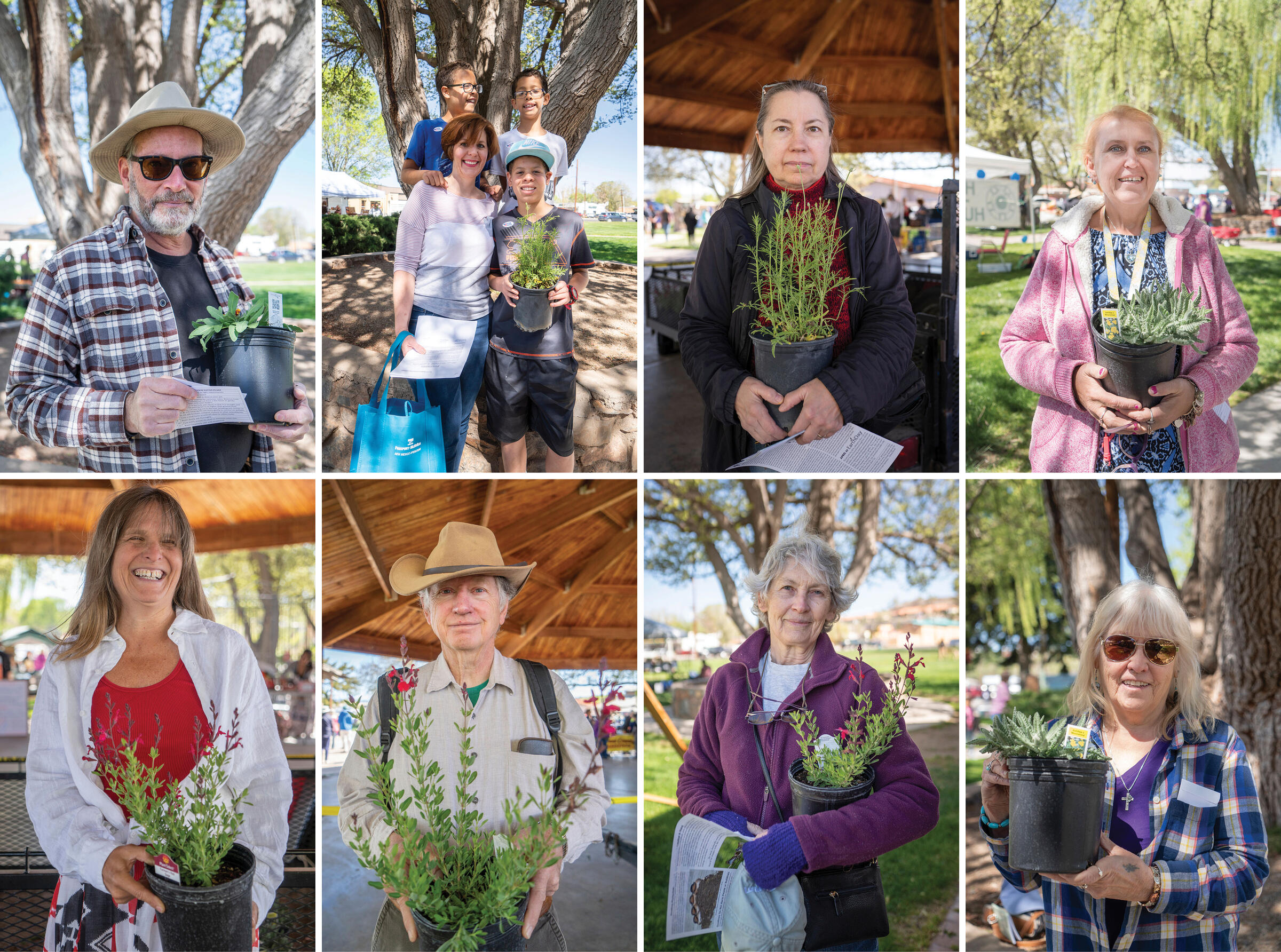 An unusually cool spring breeze was blowing at 10 a.m. on a recent Saturday, right when an event in Silver City, New Mexico’s Gough Park was scheduled to begin. But never mind the hour or the chill in the air—a couple dozen enthusiastic birders and gardeners lined up well before the appointed start time at the display set up by the Southwestern New Mexico Audubon Society (SWNM Audubon).

The reward at the head of the queue: 100 plants native to the region, to be doled out one at a time, no charge. They were gone by 11 a.m.

“It was not just the idea of getting a free plant,” that attracted people, says Terry Timme, SWNM Audubon president. “The community is becoming more and more aware of the value of native plants. People were motivated to do what they can to help the birds and pollinators."

Timme’s chapter acquired the plants from Silver City’s Country Girls Nursery. Funding for the event came from a grant through Audubon’s Coleman and Susan Burke Center for Native Plants, with additional support from the Southwest New Mexico Green Chamber of Commerce. Also given away were 200 packets of mammoth sunflower seeds; the iconic mature flowers provide food for several birds, including migrating and local Lesser Goldfinches.
SWNM Audubon’s plant giveaway was part of its “B3” initiative—birds, butterflies, and bees. According to Sara Boyett, a former SWNM Audubon president and Timme’s wife, New Mexico is home to 542 bird species, in addition to more than 300 butterfly and 500 bee species.

“We’re connecting the dots in the public’s mind among plants and all of those creatures,” Boyett says. “For instance, butterflies need milkweed to lay their eggs and have food for their larvae. Without plants that support bugs, as well as birds, the birds would go hungry.”

Not all of Southwest New Mexico’s birds consider bugs their main meal. The sprawling desert landscape around Silver City counts 11 species of hummers among its residents and migrants. With that in mind, one of the several types of plants that SWNM Audubon distributed was autumn sage, whose abundant flowers during the summer rainy season provide nectar for Rufous Hummingbirds as they return to the desert after migrating as far north as Canada.
“We focused on giving away plants that provide seeds or nectar,” Timme says. In addition to sage, freebies also included yarrow, red Mexican hat, purple coneflower, and black-eyed Susan. (One plant that did not make the list, because of its natural abundance in the area, is the cholla cactus; it’s a favorite nesting and feeding plant for the Curve-billed Thrasher.)
Abbey Carpenter, who lives in a tight-knit community a few miles from downtown Silver City, picked up a purple coneflower to add to the collection of native flowering plants she’s establishing in her yard to replace the grass that once grew there. “I’m doing it for the bees and the birds,” she says.
Video: Paul Ratje
The coneflower will not only provide bee nectar but also seeds for local birds like White-breasted Nuthatches. The cone-shaped seed pod that gives the bloom its name is particularly attractive to birds in the fall, when the flowers dry out and begin to drop their petals.

Timme and Boyett acknowledge that 100 plants and 200 packets of sunflower seeds isn’t going to drastically change the region’s landscape. But that's okay. The enthusiasm of the crowd and peoples’ interest in learning more about the importance of native species proved that their efforts to raise awareness is also working.
Video: Paul Ratje

Carpenter says she’s growing more native plants in her yard for the same reason she lets her vegetable garden wilt as winter approaches. “The birds need to eat, of course, and they love the seeds left behind,” she says.

​“We’ve always been an advocacy-focused group,” Boyett says. “Say what you will about giving away ‘just’ 100 plants. We say it’s a step toward making the world a better place through educating people.”