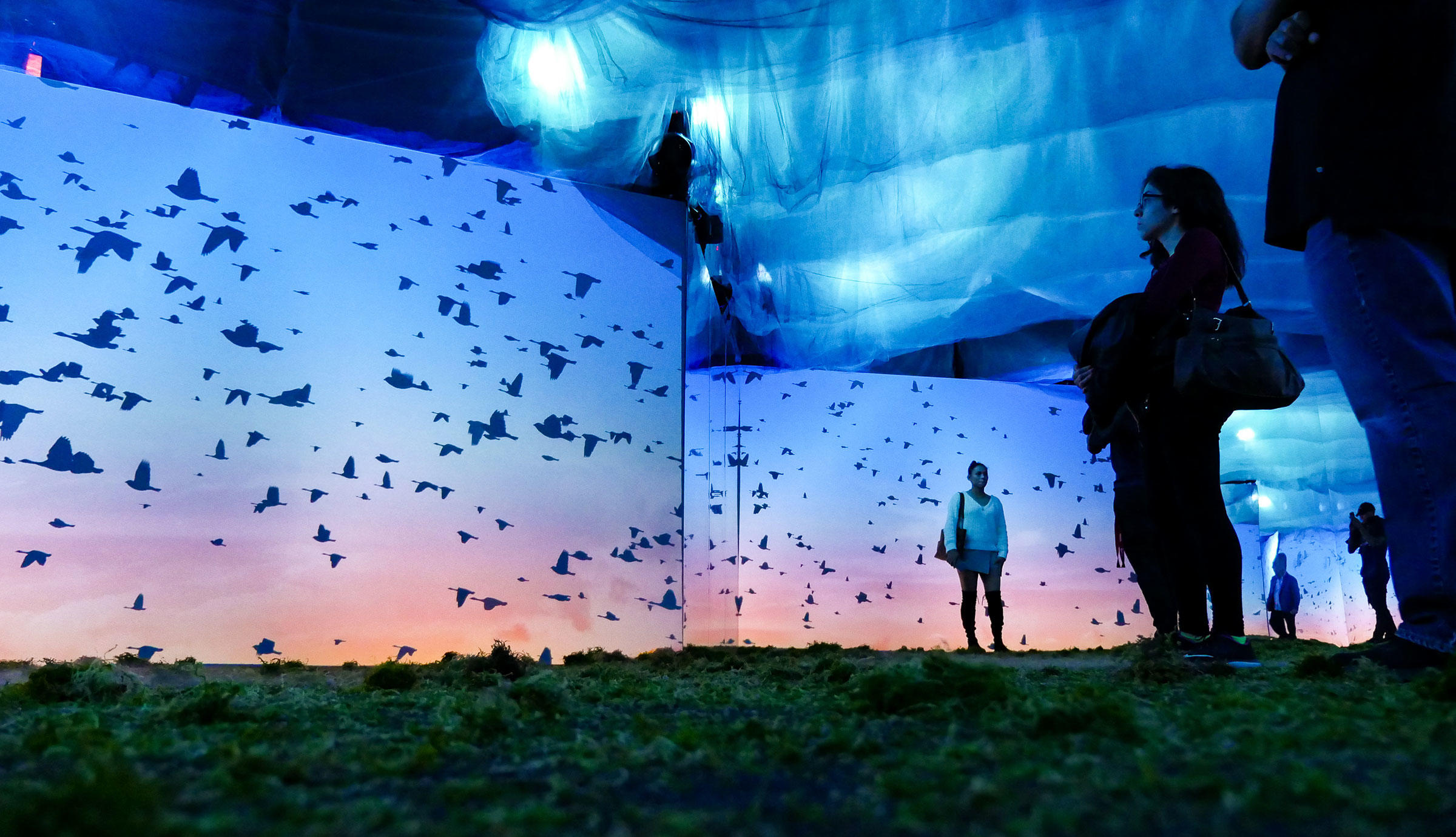 Last week, I found myself surrounded by herds of caribou galloping across vast tundra and trekking down narrow pathways in the snowy landscape of the Arctic National Wildlife Refuge, a pristine swath of wilderness located in northeastern Alaska along the Beaufort Sea. The cost of roundtrip travel—can you believe it?—was only $5.

I didn't actually travel beyond the Arctic Circle, of course: No, instead, I trekked from Audubon's office in Manhattan across the East River to Brooklyn. There, from October 24 to 27, an immersive pop-up installation titled “The Arctic Experience. Step In. Step Up.” transported visitors into the remote wilderness of the refuge, allowing them to witness the wonder of this special place for themselves. But as the name suggests, the experience wasn't just about basking in the refuge's splendor. Raising awareness about the threats this place faces and inspiring action is also the goal of the experience, which was created by the Wilderness Society, the Arctic Refuge Defense Coalition, and the Gwich’in Steering Committee, a group indigenous Gwich’in people that formed in 1988 in response to oil drilling proposals in the refuge. After its stint in New York, the exhibit heads to Washington D.C. and San Francisco in November. (Editor's note: Audubon is not a partner, but it is a project sponsor.)

“Because the Arctic Refuge is so remote, people often don’t even know it’s in the U.S.,” says Edit Ruano, director of regional communications strategy at the Wilderness Society. “And if they are able to place it, they have no idea what’s there. At the same time, you’re seeing oil corporations call it a barren wasteland. Those who come to the experience will see that it’s anything but.”

Since as early as the 1970s, industry-friendly politicians and oil and gas corporations have attempted to open up the refuge for drilling. So far, they've never succeeded. But in December 2017, the Senate passed a tax bill that included a provision to establish a fossil-fuel leasing program in the heart of the refuge: the coastal plain that is home to nearly 200 migratory and resident bird species, including Red-throated Loons, American Golden Plovers, and Snow Buntings. Caribou, bears, wolves, Arctic foxes, wolverine, and musk-oxen also call the plain home. Ruano says the hope is that, once exposed to the beauty and biodiversity of the refuge, visitors will understand why the place must remain protected and untouched.

The exhibition space itself is about the size of a small ice rink and fully enclosed by a mix of wide-panel TV screens and mirrors. As visitors walk through the space, scenery of the refuge’s extraordinary landscape and diversity of wildlife surround them. From a few feet away, I watched Arctic foxes foraging in the snow, and up close I admired a Peregrine Falcon’s spotted stomach as it perched atop a rock. Mist covered my feet as I strolled along a cushioned floor that made it feel as if I was walking on the very soil of the coastal plain. Above me, hues of blue, green, and purple illuminated wispy hanging sheets, creating an ethereal quality reminiscent of the northern lights. Then, from what seemed like off in the distance, my ears picked up a familiar chorus growing louder against the soft background music—the voices of thousands of migratory birds that soon surrounded me, their silhouettes filling up every screen as they soared through a vibrant sunset sky.

The scene is almost overwhelming, but just as visitors are getting lost in the magic of this place and the peace it brings, a deafening boom cuts through the sanctuary and all the screens go black. A sinister rumble and a sharp beeping reverberate throughout the space, mimicking the sounds of construction equipment. Voices of politicians add to the mix as they declare their support for oil drilling and “energy dominance."

Then, as abruptly as it all began, the cacophony fades, and the screens focus on a woman’s face starkly juxtaposed on a black background. Her defiant voice fills the room: “What we’re up against is a mentality that puts money above everything else.” Numerous other faces appear on the screens as their voices chime in, expressing the urgency of the moment and their determination in protecting the refuge.

These people are Gwich’in, natives of northeast Alaska and the northern Yukon and Northwest Territories of Canada, and leaders in the movement against drilling. For them, fighting development of the Arctic Refuge isn't just about protecting the wilderness and its beauty, but also about their livelihood. The coastal plain is essential habitat for migrating caribou, which the Gwich’in rely on for sustenance and also value deeply as a cultural symbol.

“This exhibit does a great job of not only exhibiting the beauty and majesty of the Arctic Refuge, but also communicates the indigenous rights element,” says Ben Greuel, the Arctic Refuge campaign director at the Wilderness Society. “A huge part of this was elevating the Gwich’in voice.”

Through their narrations, the Gwich’in emphasize that now more than ever people must join forces to protect the Arctic Refuge. That's because this September, the U.S. Department of the Interior announced its final plan to develop the 19.3 million-acre sanctuary—the closest an administration has gotten to opening up the refuge to development after half a century of debate. The chosen approach makes eligible the entire coastal plain for leasing, even though the department acknowledges that this plan, in combination with climate change, could result in extinction for some birds.

By concluding with the Gwich'in, the experience effectively puts faces to the cause, and conveys the emotional, spiritual, and historical connections native people have to the wildlife and land. All together, the exhibit leaves visitors feeling inspired and motivated. That's no accident: Upon exiting the immersive experience there is a petition board you can sign, an area where you use thread to visually map out your plan of action, and a wall of phones through which you can record messages directed to ExxonMobil CEO Darren Woods, Chevron CEO Mike Wirthand, and the U.S. Secretary of the Interior David Bernhardt, among others.

The goal is to fill the petition board with signatures as the exhibition travels to Washington D.C. and San Francisco, and then present it to lawmakers on Capitol Hill, says Lulu Gephart, senior director of marketing at the Wilderness Society. As for the “voicemails,” the groups are considering delivering them to the recipients as tweets, as well as projecting through a boombox outside of the headquarters of any oil companies that drill in the refuge should it be allowed.

Selome Brathwaite, an advocate who attended the same exhibition, said the phone wall was her favorite part. “You get to say your piece at the moment, when it’s right in your heart,” she says. Originally from Guyana, where, she points out, ExxonMobil has been pushing for offshore oil production, Brathwaite says she began actively protesting against big oil in the Arctic National Wildlife Refuge when she was a teenager during the Clinton administration. For her, the fact that the experience incorporated a concrete call to action was compelling. “I wish we had something like this sooner,” she says.

The administration is quietly making moves to drill for oil in the vital habitat, putting birds, caribou, and other wildlife in danger.