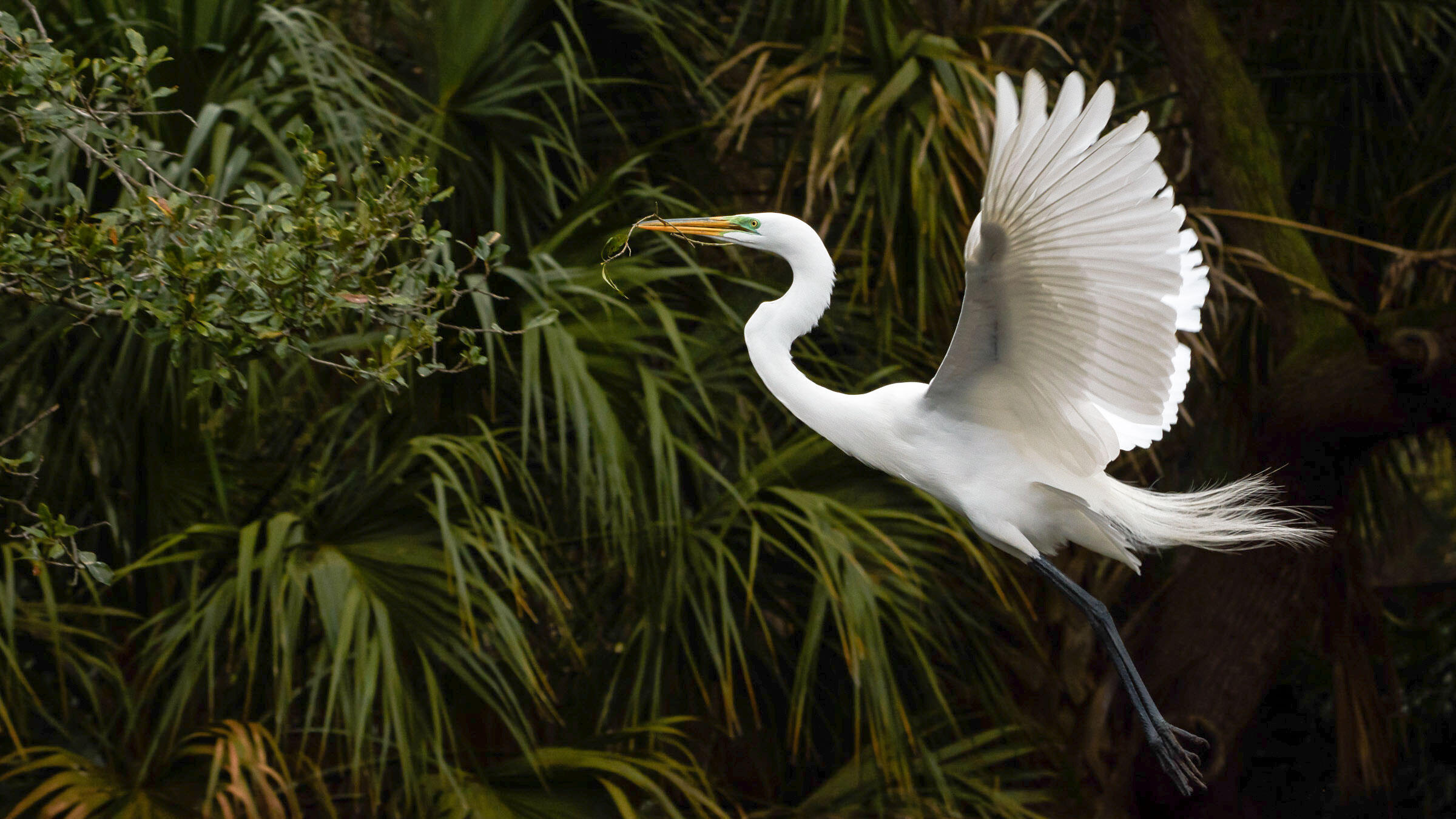 The current administration is interpreting the bird-protection law in a wildly unpopular way. Here's what Audubon is doing about it.

One of the nation’s foundational conservation laws turns 100 today. The Migratory Bird Treaty Act (MBTA), which was passed on July 3, 1918, states that it is unlawful to kill, hunt, sell, or possess most native species of birds in the United States without a permit. In addition to explicitly protecting more than 1,000 species, the MBTA has also provided a critical incentive for industries, whose activities may pose a hazard to birds, to take actions that reduce those risks.

But despite the law's success at protecting dozens of bird species from extirpation or extinction, the MBTA faces two new threats from the federal goverment.

How the Administration Is Trying to Gut the MBTA

Late last year, Rep. Liz Cheney (R-WY) introduced the so-called Cheney Amendment, which includes language that would permanently amend the MBTA to no longer cover incidental takes, or non-deliberate infractions of the MBTA. Since the law is a strict liability statute, violations can occur regardless of whether actions were intended or not.

At the same time, the Department of the Interior stated that it would no longer enforce incidental takes, thereby blocking its application to all industrial hazards, including oil pits, transmission lines, and oil spills.

The reinterpretation of the MBTA under the administration’s new policy—and the Cheney Amendment, should it become law—ends accountability for actions that kill millions of birds.

Sarah Greenberger, Audubon’s vice president for conservation, says that these threats to the MBTA are part of a broader movement to undermine environmental protections.

There is a hundred-year record that proves it is possible to have robust economic activity and environmental laws.

"There have been a number of attempts to weaken the law. And some industries would rather be free of the requirements of the enforcement of it,” she says. “But a vast majority of Americans support the MBTA. There is a hundred-year record that proves it is possible to have robust economic activity and environmental laws."

These efforts to undo a century’s worth of conservation and progress reverse work from both Republican and Democratic administrations. They also happen to be wildly unpopular: People publicly speaking against these moves include long-serving government officials, hundreds of non-governmental organizations representing millions of people, and Audubon’s own membership.

Seventeen former leaders from the U.S. Department of the Interior submitted a letter to Interior Secretary Ryan Zinke that repudiates the reinterpretation of the Migratory Bird Treaty Act.

"We respectfully request that you suspend this ill-conceived opinion and convene a bipartisan group of experts to recommend a consensus and sensible path forward. We would be pleased to work with you, involving the public, toward this end.”

Among those who signed onto the letter were two Deputy Secretaries at the Department of the Interior, five former U.S. Fish and Wildlife directors, and seven former migratory bird management chiefs that served from Nixon through Obama.

In its support of the MBTA, U.S. Senators sent a separate letter to Secretary Zinke that lists a number of the conservation victories that resulted from consistent enforcement of the law, and urged the DOI to follow in the footsteps of every past administration.

This new, unprecedented legal opinion put the lives of countless birds and the economies that rely on them, at risk.

“Working closely with states, conservation groups, and industries has led the way for decades in addressing and reducing these threats. Vital authorities under the MBTA enabled these advances, and this new, unprecedented legal opinion put the lives of countless birds and the economies that rely on them, at risk.”

Sen. Tom Carper (D-DE) and Sen. Corey Booker (D-NJ), who both received Conservation Hero Awards during the recent National Audubon Society’s board meeting, were among the senators who submitted the letter to Secretary Zinke.

Dozens of U.S. Representatives Voice Dissent Over Department of Interior’s Reinterpretation of the MBTA

In their own letter to Secretary Zinke, members from the House of Representatives cited the triumphs both Republican and Democratic administrations shared over the past century because of the successful enforcement of the law.

“We take very seriously the recent letter from seventeen former high-ranking officials in the Department of the Interior, under every Republican and Democratic administration from President Nixon to President Obama, asking that you suspend the legal opinion.”

Rep. Alan Lowenthal (D-CA), who also received a Conservation Hero Award at the recent National Audubon Society board meeting, was one of the 63 representatives who co-signed the letter to Secretary Zinke.

More than 500 organizations from all 50 states signed onto a letter asking Congress to defend the MBTA.

In addition to the groundswell of opposition from federal legislators, more than 500 NGOs from all 50 states signed onto a letter asking Congress to defend the MBTA. The organizations include hundreds of Audubon chapters, the American Bird Conservancy, Sierra Club, Defenders of Wildlife, Natural Resources Defense Council, Cornell Lab of Ornithology, and the American Birding Association.

“On behalf of the more than 500 undersigned organizations from all 50 states, representing millions of members and supporters from across the country, we strongly urge you [senators and representatives] to defend the Migratory Bird Treaty Act (MBTA).”

The letter makes it clear that these NGOs, who are speaking on behalf of their millions of supporters, want to protect the nation’s birdlife.

Audubon Members Voice Their Support of the MBTA

As of June, tens of thousands of Audubon members had sent more than 100,000 letters to members of Congress and Secretary Zinke to voice their support for the MBTA.

Audubon Takes the Fight for the MBTA to the Courts

In response to the administration bucking decades of policy and practice, Audubon recently filed a federal lawsuit, Audubon v. Dept. of the Interior. The coalition joining Audubon in the lawsuit, which includes the American Bird Conservancy, Center for Biological Diversity, Defenders of Wildlife, National Wildlife Federation, and the Natural Resources Defense Council, seeks to block the Trump Administration's efforts to eliminate longstanding protections for raptors, waterfowl, and songbirds.

What Comes Next? An MBTA at the State Level

A concrete effort to sustain and support the MBTA despite the current environment is gaining traction at the state level. Assembly Bill 2627 in California aims to guarantee the same protections as currently outlined in the federal MBTA while providing a path forward for industries. The bill, authored by Assembly member Ash Kalra, has passed out of the assembly floor and the California Senate’s Natural Resources Committee.

According to Mike Lynes, director of public policy for Audubon California, the bill will reduce conflicts by incentivizing the use of well-established management practices. “The Trump Administration’s interpretation and the Cheney Amendment are fundamental threats to migratory birds,” Lynes says. “Assembly Bill 2627 will work similarly to how the MBTA has been administered in California, protecting birds from significant threats while allowing responsible development of renewable energy and other economic activities.”

States Across the Country Declare 2018 "The Year of the Bird"

In honor of the centennial anniversary of the MBTA, states including Maryland, Nebraska, Utah, and Arkansas have declared 2018 as “The Year of the Bird.” They join National Geographic, Cornell Lab of Ornithology, BirdLife International, the National Audubon Society, and more than 100 other organizations celebrating birds and their places in our lives.

Grassroots Power Made the MBTA Possible 100 Years Ago, and It Can Preserve It Today

It is important to ring in the next century with the same grassroots, citizen-based actions that helped save birds from the plume trade more than a century ago.

Though the Trump Administration is trying its level best to cripple the MBTA through a regressive and detrimental reinterpretation of the law, Greenberger says it is important to ring in the next century with the same grassroots, citizen-based actions that helped save birds from the plume trade more than a century ago and made the MBTA possible.

"In our 100th year of leadership it is bittersweet to celebrate with a step backwards," Greenberger says. "But for the National Audubon Society, our members, and sister organizations, it is a call to action to start this century like we did the last."

Nobody yet knows what the final outcome will be on the MBTA or state efforts, but one thing is clear: Protecting birds is wildly popular, and for 100 years, the MBTA has been an effective and bipartisan means to accomplish that. And while the current administration continues its assaults on the MBTA, it's flouting the wills of millions of Americans.

If you care about birds, protect the MBTA. Reducing deaths and saving native species of birds is not hard. Join us in celebrating Audubon’s founding victory by urging members of Congress and the Department of the Interior to protect the MBTA.

We can't defend the Migratory Bird Treaty Act without you! Send a letter to your representative today, and donate to Audubon to support our defensive work.