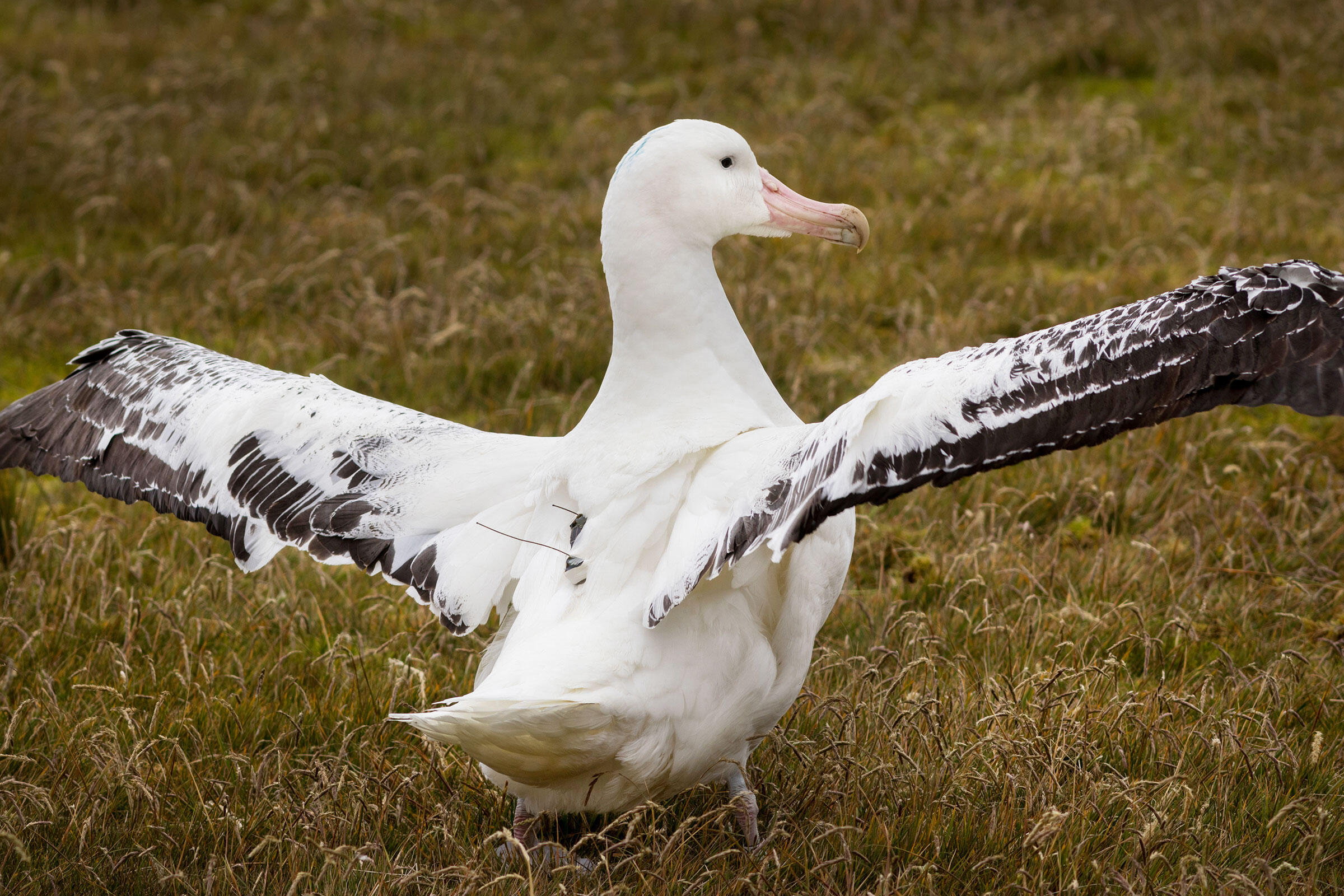 The seabirds' knack for finding fishing vessels could help authorities crack down on crimes on the high seas.

Even among seabirds, albatrosses are exceptionally suited for hunting on the high seas. Soaring on wings that can span 10 feet or more, they save energy by gliding for hundreds of miles without flapping. As they ride the wind, they’re also testing it for fishy odors, which they can smell from 12 miles away. So it’s no surprise that they’re often attracted to fishing boats. The massive birds wait for fishers to lower hooked lines, then drop to the surface to devour the baitfish—sometimes at their peril.

Albatrosses’ attraction to ships doesn’t just make them efficient foragers: It also makes them excellent spies. Or so hypothesized a group of researchers who recently fitted Wandering and Amsterdam Albatrosses with electronic trackers to patrol the seas from the skies and track down illegal fishing operations. The data collected by the birds shows that around one-third of vessels in international waters of the southern Indian Ocean are trying to sail under authorities’ radar by not reporting their locations, meaning they are likely involved with illegal or unreported fishing. The new study, published today in Proceedings of the National Academy of Sciences, suggests that albatrosses’ natural behaviors can help scientists understand illegal fisheries, and could one day even help authorities police them.

“It’s incredibly efficient to use these birds to see where there are fishing vessels on the water,” says David Kroodsma, director of research at Global Fishing Watch, an international non-profit funded by Oceana, SkyTruth, and Google that develops vessel-tracking technology; he was not involved in the albatross study. “They are almost like homing devices for fishing vessels.”

Albatrosses can’t track illegal fishing by themselves—for that, they need extra equipment. To that end, marine ecologist Henri Weimerskirch and his team at the French National Centre for Scientific Research developed a logger that, when attached to an albatross, tracks its location and also picks up short-distance radar signals from boats. Even vessels that are trying to skirt authorities by turning off voluntary tracking devices, used by the International Maritime Organization and countries’ coast guards, keep their short-distance radar on to avoid collisions with icebergs or other ships. However, these transmissions can’t be picked up by distant government centers.

Enter: albatrosses. When an equipped albatross passes a ship, its logger sends the bird’s location along with the locations of nearby short-distance radar transmissions to a central database in real time. The researchers compare the vessel’s position to voluntarily reported ship locations to determine which ones are trying to avoid detection. With their penchant for fishing vessels and far-flying abilities, albatrosses are prime candidates for the job of ocean sentinels.

It’s important to note that a fishing crew that doesn’t report its location isn’t necessarily engaging in illegal behavior; maybe their vessel isn’t equipped with the right technology, or maybe they temporarily flipped off their location signal to protect prime fishing spots from competitors. But the reality is that many of these boats are trying to avoid detection. Some harvest seafood illegally: About 20 percent of the world’s fish, worth up to $23 billion each year, is caught by illegal, unreported, or unregulated fisheries. They may use prohibited gear that destroys marine environments or dangerous practices that save money but kill birds, turtles, sharks, and dolphins. Others fish in protected areas. Some illegal fishers also engage in human rights abuses and crime such as human trafficking, slavery, and money laundering.

Tracking vessels that are trying to hide from authorities is therefore important to protect people and wildlife. “It's a big issue because in fact you have no information on the amount of fishing and the amount of mortality that fishing can induce,” says Weimerskirch, who has studied seabird deaths from fisheries for more than 25 years. Deep-sea fishing vessels are a particular problem because they put out weighted longlines, which carry a series of small baited hooks, that attract albatross and other non-target species. (Non-target catch that must be discarded is known as "bycatch.") When the hooks catch seabirds' bills, bodies, or wings, they’re dragged underwater until they drown. In this way, hundreds of thousands of birds die each year. Illegal operators probably don’t take the extra effort to reduce bycatch, and experts estimate that in some cases illegal operations kill more birds than legal ones by at least one order of magnitude.

To test their seabird-spying scheme, Weimerskirch’s team needed avian participants. They visited Crozet, Kerguelen, and Amsterdam Islands in the southern Indian Ocean and, after capturing individual birds, attached electronic loggers to the backs of 169 Wandering and Amsterdam Albatross. They planned to remove the loggers when the adults returned to the islands after one foraging trip; any tagged juveniles shed theirs through molting.

The albatrosses covered the southwestern Indian Ocean as far east as New Zealand, a region that Kroodsma says is one of the most difficult places to monitor. There, they detected more than 5,000 radar emissions from 353 boats. Overall, 28 percent of vessels did not report their location, and in international waters, where there is no policing, that figure grew to 37 percent.

The albatross approach is promising, Kroodsma says, to help law enforcement find and apprehend illegally operating fishers. Countries could send human patrols to target areas identified by seabirds in real time. They could also analyze bird-collected data in bulk to identify patterns of unreported fishing. “The ocean is extremely big, and it’s hard to know where to go to do law enforcement,” Kroodsma says. “If you can say these areas and these times are interesting to go patrol, you’ve just made it possible to patrol the ocean.” In international waters, fishing conventions can set rules and suggestions based on the information gleaned from the remote surveillance.

The albatross aren’t merely tools of law enforcement; the data helps their species, too. “Bycatch has been at unsustainable levels,” says Richard Phillips, a seabird ecologist at the British Antarctic Survey. In long-lived birds like albatrosses, which can survive more than 60 years but breed only once every year or two, even a small amount of bycatch can affect the population. “The numbers of birds killed in these fisheries is sufficient to be driving these fairly steep population declines,” Phillips says.

Now that the concept has proven viable, researchers are considering diversifying their wildlife patrols to include other species harmed by fishing vessels, including sea turtles. Outfitting threatened species with trackers can determine where in the ocean they are most at risk, and where authorities should focus their surveillance efforts. “It has a very nice elegance to it,” Kroodsma says. “They’re basically using the wildlife to help monitor the oceans.”