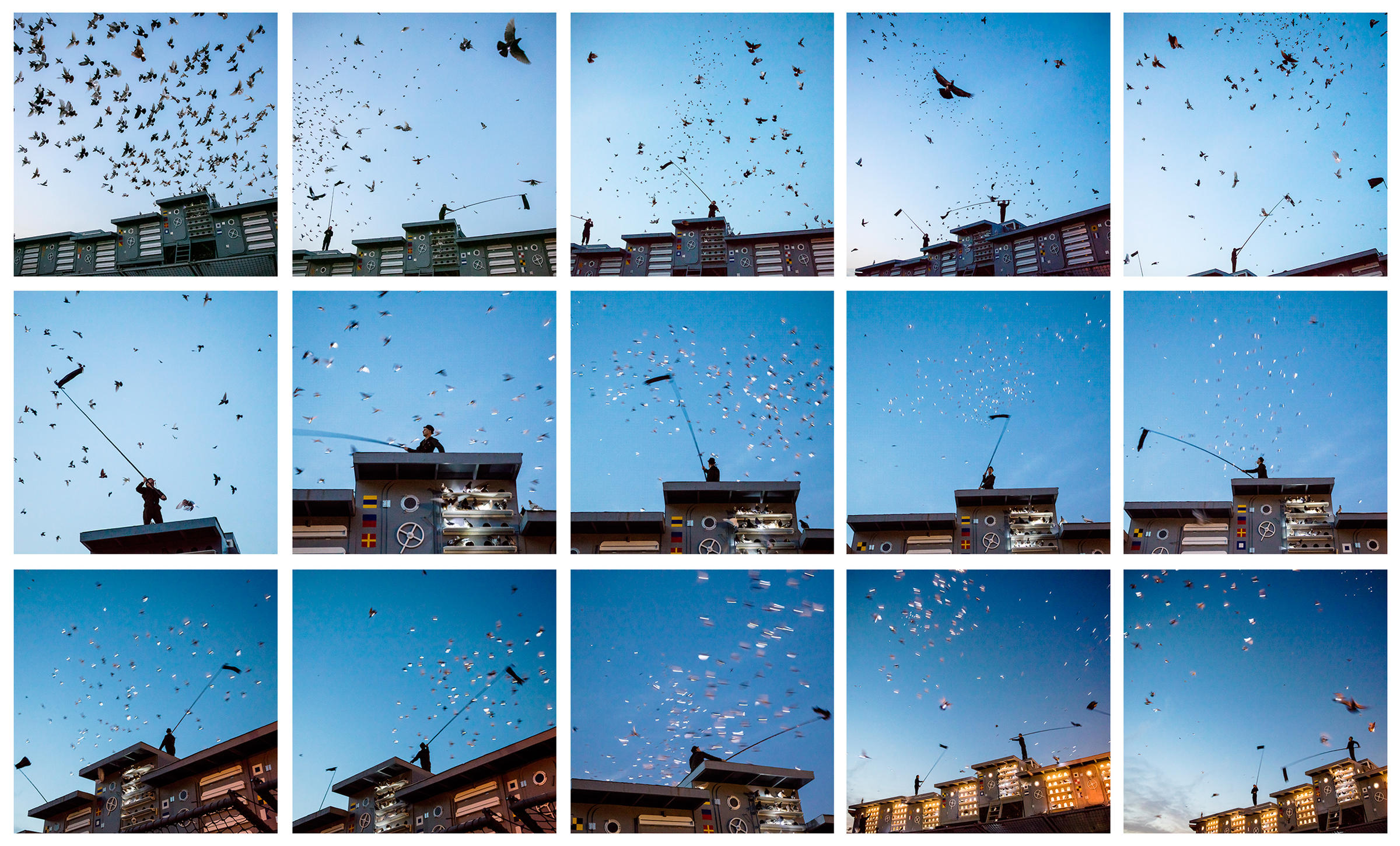 The audience for the aerial pigeon show at the Brooklyn Navy Yard shuffled around the edge of the East River, balancing fish sandwiches and local beer, navigating stadium seating while facing a ship docked in Wallabout Bay. Two thousand Rock Pigeons mirrored the human movement, rearranging themselves in short bursts of flight, settling in to temporary perches on top of their retrofit navy vessel, the Baylander, now crowned with nine freshly constructed coops and a baby pigeon nursery. The pigeons were staring at the humans staring at the pigeons.

About a dozen miles north on Randall’s Island, “the well-to-do were meeting the truly wealthy” at the Frieze art fair; but the fancier art crowd was here, on a Saturday, willing and ready to be pooped on by a flock of pigeons, each with a small LED light banded to one leg. One observer wore a bright red slicker in anticipation of art falling from the sky—a good portion of the crowd came ready with a hat or a skully. Patrons behind me talked about art purchases that topped tens of thousands of dollars while Duke Riley, the mastermind behind the spectacle “Fly by Night” stood in a mechanic’s jumpsuit and a porkpie hat, watching the crowd swell. They murmured over a sad Nick Cave baritone track, perfect to introduce a deliberately anachronistic pigeon show.

At dusk, the music was replaced by audio straight from the coops, a symphony of mic-ed wings flapping and escalating coos that prompted the audience into a hush. The birds sounded noisy and nervous, as if they were backstage anticipating a show. In quiet awe, the crowd was watching the ship, as the sun dipped down. Riley mounted the vessel blowing a whistle and waving a long pole with a black garbage bag tied to the end. The pigeons responded to the call by gliding through a new night, their banded lights streaking the sky with luminescence, dipping and turning, clustered according to the rhythm of Riley’s whooping and hollering.  About half flew low, cresting the crowd; some flew very high becoming small, pin-prick lights circling the fixed points of satellites; and half of the pigeons refused to fly, perched on the boat deck, stable at home. Every now and then the deck pigeons were scattered into flight by Riley or one of his fellow pigeon wranglers. They would reluctantly take to the sky and then plop right back down. Other, more ambitious pigeons traced shapes on the sky, drawing their trajectories, their flight patterns, becoming constellations. Their LEDs were secured where a messenger pigeon would have carried information in bygone years.

The first historical instance of human/pigeon collaboration goes back to ancient times. But as recently as 1896, the U.S. Navy had several pigeon stations, including the largest pigeon coop in the United States. According to a blog post by Andrew Gustafson, Lt. E.W. Eberle wrote about how pigeons were an essential component to naval strategy prior to wireless radio, linking coastal defenses with incoming ships. He wrote fondly of the flock in a United States Naval Institute report: “Our fighting ships are too few in numbers to be divided; we must keep them together in order to be able to strike a powerful, decisive blow, and here is where the scouts, with their swift-winged little messengers, stand out in such importance, because the scouts are the ones that furnish the fleet with the information.” The pigeons were kept on the Brooklyn Navy Yard’s Cob Dock, an artificial island that used to be in the center of Wallabout Bay where Riley’s pigeons were performing an homage to the homing pigeon more than a century later.

The pigeon appreciation society is an eclectic lot, sometimes toeing the line between admiration and unseemly. Researchers have studied pigeon navigation before—how the birds detect low-pitched sounds, and can navigate by the stars. Charles Darwin raised pigeons for a while; he studied how different traits were inherited throughout multiple generations. In the late 1920s, eccentric inventor Nikola Tesla spent his afternoons rehabilitating injured pigeons in his hotel room, famously falling in love with one: “I loved that pigeon as a man loves a woman, and she loved me. As long as I had her, there was a purpose to my life.” Former boxer Mike Tyson credits the birds with saving his life, saving other people’s lives, inspiring his pugilism—he even challenged an Arizona law to keep a flock of 350 on his roof.

But pigeons still get a bad big-city rap, which is why Rita McMahon, director of the Wild Bird Fund, supports Duke Riley’s project. She says that pigeons as art could have a “transformative effect” on how the public responds to the birds—they could see pigeons in a new light. Though Riley has worked with pigeons twice before, flying a flock from Cuba to Florida and through Havana, he’s still subject to criticism regarding the welfare of his pigeon collaborators. Activists have tweeted that the pigeons are disoriented and don’t naturally fly at night. Riley, who rescued many of the birds who performed, says that the show consulted with pigeon clubs, an avian veterinarian, and experts from animal welfare groups. As the flock flew above deep into the sky, three kayakers waited below, there to care for any accidental dives, to administer avian emergency care, if necessary. It wasn’t.

For 45 minutes of dusk, Riley flapped his garbage bag as his birds flapped their wings—pigeons ranging from homers to satinettes to Russian high fliers to German beauties to tipplers to tumblers to Syrian Damascene. And as Riley’s hollers changed into a cooing call to come home, the flock immediately returned to their temporary home on the boat, as quickly as they’d left.

So what was Riley’s fleet communicating? Was the show, in fact, transformative in the moment, or transformative in the long run, changing public perception of the common bird? Would a pigeon performance still be beautiful without bells and whistles and LED lights? It was undeniably breath-taking, to see an improvised and ephemeral drawing of flight. It seemed fair to wonder if Riley’s message was a call to gathering: a human flock sequestered together with their pigeon counterparts, pausing under a uniquely lit night sky to appreciate each other. The invisible made visible; the ordinary made spectacular.