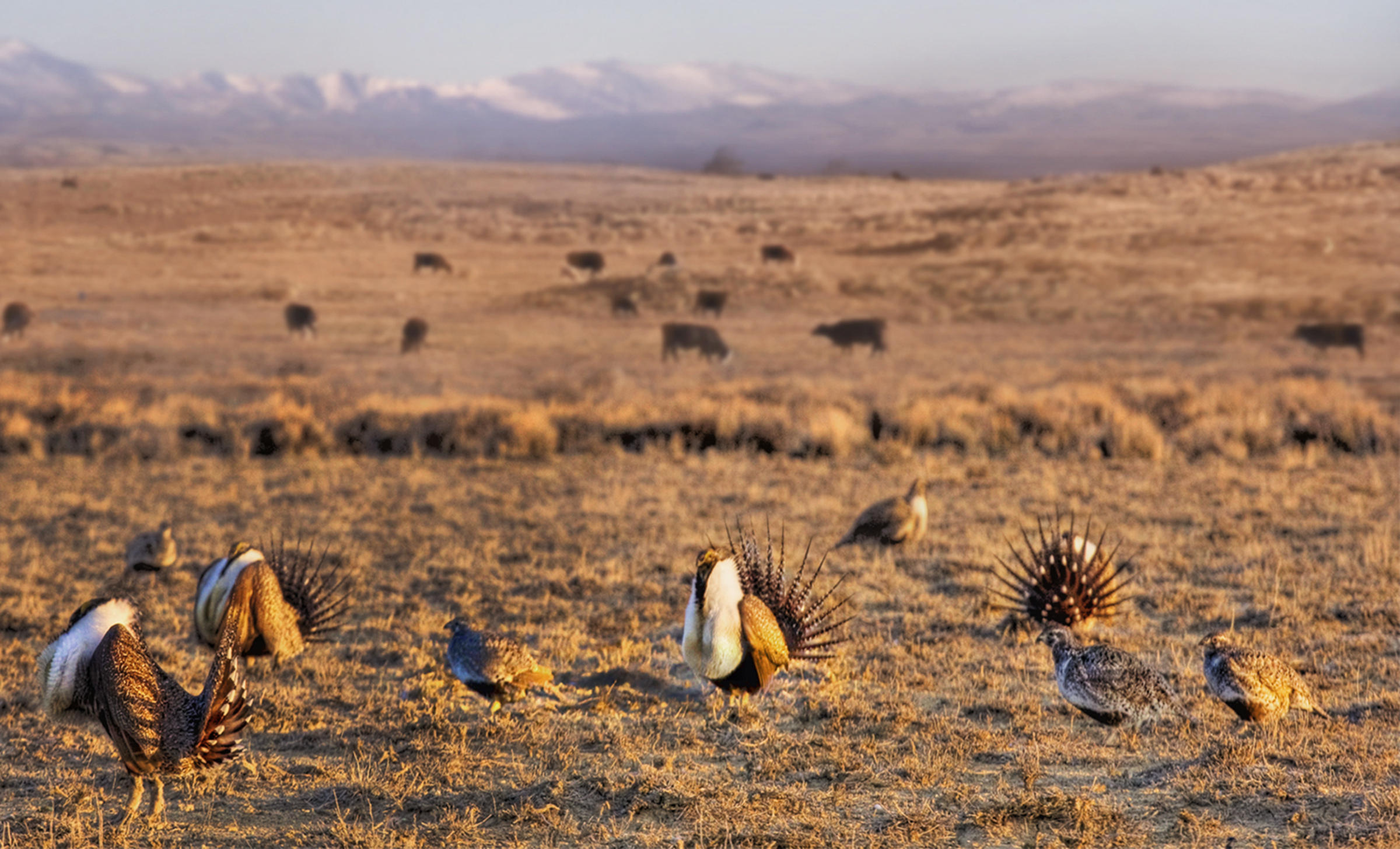 An Offset Program for Sage Grouse

Buy a credit, save a sage-grouse. But some remain skeptical about the emerging market.

Can marketplace incentives bring a bird back from the brink? In the case of the Greater Sage-Grouse, the U.S. government and Audubon hope so, but some scientists aren’t so sure.

A conservation bank will be created for the Greater Sage-Grouse in Central Wyoming, Fish and Wildlife Service Director Dan Ashe and Wyoming Governor Matt Mead announced last month. In exchange for putting acreage into permanent conservation easements, landowners will receive credits allowing them to develop land outside the easements. They can also sell these credits to other individuals and businesses hoping to develop land, similar to how carbon offsets can be purchased as part of the European Union’s cap-and-trade scheme.

Land in conservation easements can still host ranching, farming, or logging, as long as the critical sage-grouse habitat is maintained. Similarly, unprotected land can’t be decimated—developers must improve habitat on the property or otherwise mitigate the potential harms to the bird.

The Fish and Wildlife Service first began approving conservation banks in the 1990s, following disclosures that some landowners were destroying habitat on their property so as to avoid the Endangered Species Act’s land-use restrictions.

Other environmental credit systems have a good track record: A 2001 study by the National Research Council shows that similarly designed wetland mitigation banks have had positive outcomes for the protected ecosystems—keeping water clean and leaving habitat undisturbed—without gouging developers’ bottom lines. There isn’t similar research for conservation banks, so the Greater Sage-Grouse will be an important test case.

More than 100 of these sorts of bird banks already exist, nearly all of them in California, Texas, and Florida. Many are aimed at protecting rare birds like the Red-cockaded Woodpecker, Golden-cheeked Warbler, and California Gnatcatcher, species similarly threatened by housing, highway, and industrial development.

But the sage-grouse bank will be the largest to-date—officials say it could eventually total 700,000 acres. The bank could be particularly helpful because over 70 percent of critical sage-grouse habitat is on private land, not public, says Brian Rutledge, vice president of Audubon Rockies, who was involved in the conservation bank’s negotiations.

The main goal of the program is to prevent the need for the Greater Sage-Grouse to be listed under the Endangered Species Act—the Greater Sage-Grouse’s numbers have declined by nearly 50 percent since 2007.  An endangered species listing could sharply curtail energy and agricultural development in the 11 Western states where the bird lives, so conservation efforts like the Greater Sage-Grouse Initiative have found wide support from locals who have a vested interest in keeping the bird off the list.  "Programs like the conservation bank incentivize private landowners to come to the table," Rutledge says.

“It gives them financial compensation for something that they want to do anyway,” says Jessica Fox, an ecologist with the Electric Power Research Institute, a nonprofit funded by utilities, has been studying conservation banks for the past 15 years.

Rutledge says the bank is remarkable for its pragmatism; it’s a habitat management plan that acknowledges the challenges of making both property owners and ecologists happy in the long term. That makes it a potential model for conservation work in other hotly contested habitat ranges.

“This is the future of conservation,” Rutledge says. “Where we can’t avoid impacts, opportunities like this give us a chance to mitigate the damage.”

Some scientists, however, are skeptical about the bank’s effectiveness. “It’s a political gimmick [with] no value whatsoever,” says Clait E. Braun, a habitat management consultant with decades of experience studying the Greater Sage-Grouse (as well as the closely related Gunnison Sage-Grouse). In March, he and 10 other scientists wrote a letter expressing concern that federal agencies appeared “to be abandoning science-based conservation measures.”

The problem, Braun explains, is that sage grouse already occupy what’s left of all the available habitat in the region—and they’re not crazy about newcomer birds intruding on their turf. If birds outside the protected area are displaced by development, they’re not likely to find refuge alongside grouse living inside the bank. The best thing to do to protect sage-grouse habitat, Braun argues, is to remove the cattle and reclaim habitat. "Do you think that's ever going to happen in the West? Not a chance," he says.

Rutledge says that the program may eventually transform degraded habitat into healthier land that is able to support more birds. At this point, though, he’s focusing on protecting the land from further denigration.

“We are at first base right now,” Audubon’s Rutledge says. “Establishing that we have core habitat and we will protect it is number one.”