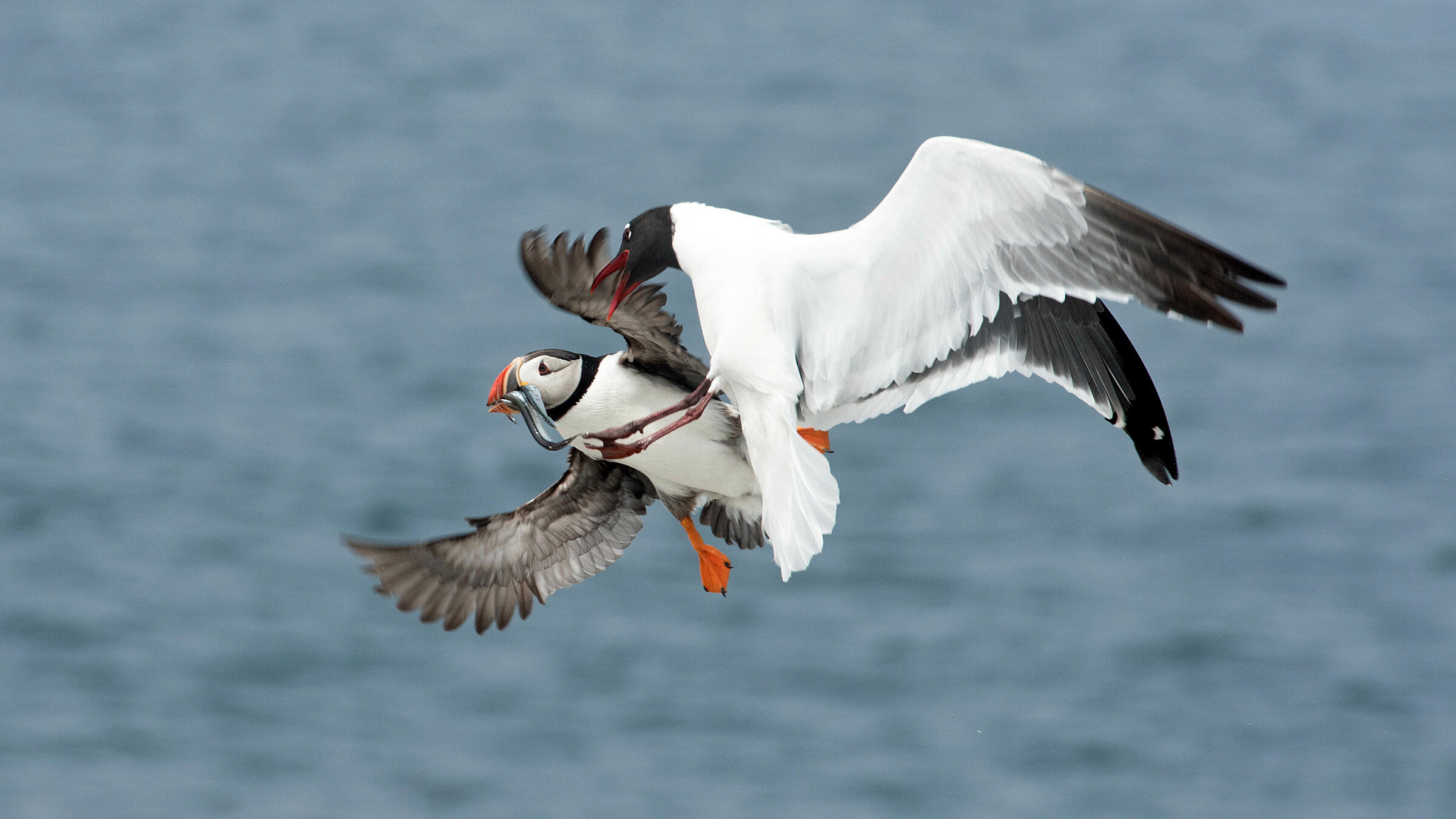 A Laughing Gull steals a fish from an Atlantic Puffin. Photo: Fan Zhongyong

They steal food from other birds (and British teenagers), and eat baby seals alive. Still, some signs point to “no.”

Stare into the eyes of a gull and…you won’t really see all that much staring back. They appear to be simple birds, even vacant, content to spend their days flapping around the beach in search of a few wayward potato chips or a crust of bread.

But gulls, the shorebird family that counts more than 50 species and is found on every continent, from the frozen poles to the balmy tropics, are actually quite devious and tactical—part cunning thief, part crafty ninja. In the United Kingdom, for example, Herring Gulls and Lesser Black-backed Gulls have learned to pilfer French fries directly from the hands of human teenagers. And in the course of infiltrating the entire globe, they’ve developed plenty of other ways of cadging a free meal. Some of them aren’t pretty.

Just ask the ducks of Poland’s Szczecin Lagoon. Tens of thousands of Greater Scaups, Tufted Ducks, and Common Pochards gather there every winter, in the Odra River Estuary near the Polish-German border, and they have learned all too well just how crafty a gull can be. Dominik Marchowski, a biologist from Szczecin University, was on his second winter studying the lagoon’s duck populations when he and his colleagues realized that Herring and Mew Gulls kept popping up among them, showing up for a banquet to which they hadn’t been invited—of zebra mussels, which blanket the bottom of the lagoon. The invasive bivalves make for a tasty meal, but the gulls can’t dive beneath the surface to get them. The ducks can, however, wresting a few at a time off the floor and returning to the surface to gobble them up (the ducks swallow the shellfish whole and their gizzards break the shells into pieces—which then help them digest everything else). While the ducks sloppily drop a mussel here and there, the researchers soon realized that the gulls aren’t passively waiting to scavenge—they’re actively stealing, possibly by scaring the ducks into abandoning their hard-earned meal. Marchowski’s team wasn’t able to get close enough to understand what exact techniques the gulls employ to wrestle the food away (“The recorded films also showed splashes of water, indicating that a duck had escaped under the water, and then, at that very spot, a gull consuming scattered mussels abandoned by the duck,” he says) but whatever it is, it’s working.

Gulls Are Maybe Torturers, Too

Gulls also have less pleasant ways of finding easy calories: Off the coast of Argentina, Kelp Gulls land on the backs of infant southern right whales, then sink their beaks into the flesh, gobbling up chunks of skin and blubber. The gulls’ torment of young whales is so intense that some cetacean biologists fear that they could be having an observable impact on the long-term stability of the southern right whale population.

Namibia’s Kelp Gulls are just as monstrous. Where the country’s deserts meet the South Atlantic, Austin J. Gallagher, a postdoctoral researcher at Carleton University and founder of Beneath the Waves, recently documented gull predation of juvenile cape fur seals, the biggest of which will eventually weigh up to 660 pounds. The birds start by pecking out the baby seals’ eyes; once blinded, the young pinnipeds become completely incapacitated, allowing the gulls to feast at will as they slowly die. “The baby seals are literally helpless,” says Gallagher. So are their parents, who can also be targets: “When the adults come back from foraging, these multi-day feeding forays, they are completely exhausted,” he says. “All of their bodies’ energy is being used to digest all this really cold food, [and] they just sit there,” unable to fend off the flock of marauding gulls.

They also eat baby pigeons (note: that video is not for the faint of heart—baby pigeons are pretty cute).

Getting to the Bottom of Gulls’ Attitude Problem

So are gulls are just jerks, plain and simple? To find out, we asked Steve Kress, vice president for bird conservation at Audubon, and founder of Project Puffin.

Kress has caught gulls preying upon the baby terns he works to protect. He has caught them stealing food from his puffins in mid-air. But still, he says, the Laridae are just doing their job. “Gulls are adaptive generalist birds and that’s the bottom line,” he says. “They’re great survivors, very, very intelligent, and quick to find clever ways to earn a living.” And while our empathetic primate brains might bristle at their seemingly savage ways, they’re just trying to get by.

Plus we aren’t exactly helping. Gulls probably wouldn’t have to be so aggressive if we weren’t mucking up their habitats and food sources. Even our best-intentioned efforts can gum up the system. Gallagher suspects that the extensive protection afforded Namibia’s marine mammals has allowed the fur seal population to expand; local gulls, facing a decline in local fish stocks due primarily to humans’ insatiable appetite for seafood, learned that seals are not only adorable and charismatic, but delicious as well. And in Poland, Marchowski suspects that the gulls learned to steal mussels only recently, following the 2013 closure of a nearby landfill where they previously did their snacking, which forced the gulls offshore in search of food. There, faced with competing for fish with Cormorants, Common Mergansers, Smews, and Great Crested Grebes, the ducks must have seemed a much easier mark.

Kress points out that gulls are pre-adapted for life on the dark side. Their beaks aren’t long and specialized like that of a heron or tern; they’re blunt, and slightly hooked, so they’re useful for snacking on—and stealing—a wide range of foods. Plus, their feet are capable of walking or swimming in a variety of habitats, and their legs are positioned for a quick take-off. In other words, Kress says, “they’ve got the equipment to do this,” and to do it just about anywhere. It’s no accident that those features could describe those brainiest of birds, the corvids, equally well. “Corvids and gulls are right up there among the smartest,” adds Kress. At his field sites, gulls have even learned to recognize individual researchers’ faces, just like ravens and crows do.

So, are gulls jerks? Yeah, but they have to be, says Kress. “People don’t give them the credit they deserve.”