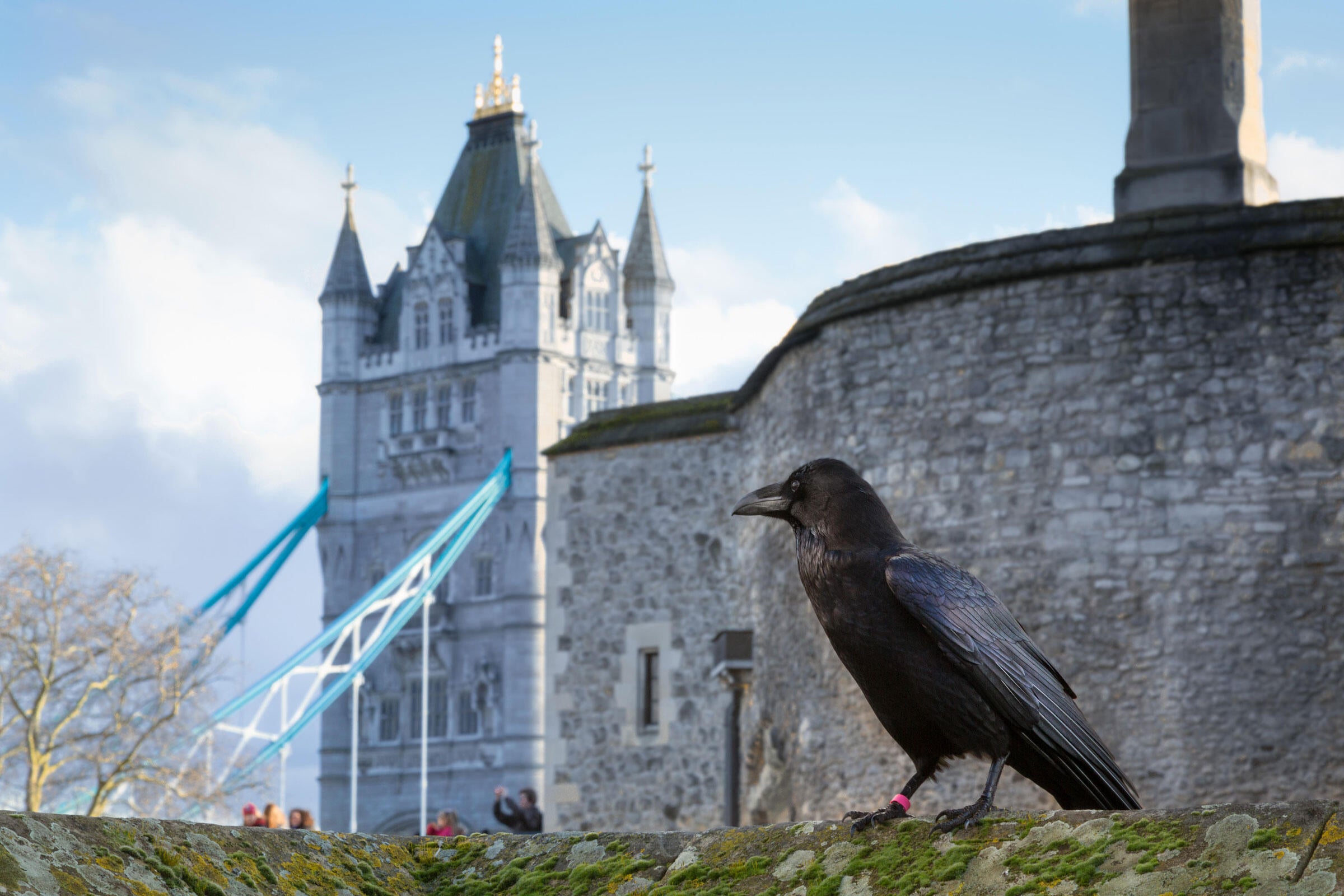 According to legend, ravens act as the Tower's guardians. Photo: Tim Moore/Alamy

At the Tower of London, a Ravenmaster for the Digital Age

An ancient tradition gets a modern update thanks to the social media-savvy caretaker of the Tower's six resident ravens.

One sunny afternoon in the ancient courtyard at the Tower of London, Christopher Skaife stands in full ceremonial regalia: a towering top hat and thick navy tunic, his chest emblazoned with a crown in scarlet fabric. Among the guardians of the thousand-year-old fortress of the murderous King Henry the Eighth, Skaife has a unique position: He’s the official Ravenmaster, in charge of a six-bird flock kept there to fulfil their mythic role as guardians of the tower.

Exactly how Common Ravens came to occupy the fortress centuries ago isn’t known for sure. But their presence is driven by a superstition powerful enough to have survived the ages. “Should the ravens leave the Tower of London, it will crumble into dust and great harm befall the kingdom,” Skaife says solemnly, citing popular legend. “That’s a lot of pressure.”

As part of a long line of Ravenmasters that stretches back to the 1700s, for the past 11 years he’s risen from his apartment on the tower's grounds at five o’clock each morning to nudge the ravens awake, set them loose, and observe their activities. It's not a job for everyone, given the species's reputation. “In most cultures they are seen as harbingers of doom,” Skaife says.

According to legend, ravens used to swoop onto Britain’s medieval battlefields to feast on the carnage, announcing their arrival with a malevolent shriek that “sounds like it’s from hell,” Skaife says. But that hasn’t stopped him from broadcasting it to the world. As modern Ravenmaster, he’s added a new task to the job description: Social Media Master. With more than 20,000 followers on Twitter and Facebook, and almost 50 million loops on Vine, Skaife seems to have cornered the market on raven-related media. On his various accounts, countless clips of these jet-black birds croak and caw away much to the delight of his followers.

“I have the deepest, darkest Goth followers, scientists, bird lovers, historians, artists—you name it,” Skaife says. “They have a general interest in birds and corvids. So that’s brilliant.”

As he speaks, he’s joined by his sidekick, the raven Merlina, who sits on a hedge at his elbow and croaks in approval. She’s one of the Tower’s friendliest birds, but lets few people get as close to her as Skaife does. “Because I can get up close, I can show what a feather looks like. People love it,” he says, whipping out a macro lens for his iPhone, which he uses to film and photograph the Tower’s birds. Along with Merlina, these include Erin, Rocky, Munin, Jubilee, and Gripp. Each bird is a familiar character on Skaife’s social media feeds, and appears to an applause of likes and shares.

Armed with his phone, he sets out each day to entertain the masses with his ravens’ antics—perhaps photographing their ebony feathers gleaming in sunlight, or capturing an eerie, slow-motion clip of a raven’s blink. So far, he’s filmed some unexpected corvid behaviors—Merlina, for instance, regularly rolls across the Tower’s immaculate lawn—and has shared clips of their more unorthodox sounds. For example, the birds ‘purr’ when their beaks and feathers are tickled, though it sounds more like a door creaking open.

The Tower of London’s ominous raven legend is among the main attractions for the 3.5 million tourists that traipse through the fortress's grounds each year. Almost daily, these visitors quiz the Ravenmaster about the birds: Where are they from? How does he keep them at the Tower? What do they eat? Can they get one? To the latter, Skaife always answers with an emphatic no—“unless you’re going to live 40 years, because they take a lot of dedication,” he says.

The ravens aren’t taken from the wild, as some people assume, but are considerately chosen from trusted breeders. To keep them in the grounds, Skaife “gives them a haircut,” which involves carefully (and humanely) trimming their primary and secondary feathers so the birds can still fly, just not too far. Indeed, as we spoke, the pair Munin and Jubilee suddenly swooped up to perch on a turret, from where they cawed dramatically and surveyed their territory.

“I give them as much freedom as I possibly can without my heart palpitating all the time,” Skaife says—though one bird recently took itself on an adventurous outing over the Tower walls and across the Thames, before returning dutifully to his home. Even the most adventurous ravens can't resist feeding time: The birds dine on a meaty diet of raw chicken, mice, and blood-soaked biscuits. Occasionally, a macabre clip of a raven stalking around with a chick’s head or decapitated mouse in its beak makes it onto Twitter to the fascination of followers.

When Skaife first ventured onto social media, he expected only a few shares and little feedback. “I just didn’t realize how popular corvids were until I started looking into it,” he says. He’s since made a point of tapping into younger audiences “to try and get them engaged with looking at birds.” That’s when Vine, popular with the teenage crowd, entered his social media regimen.

Followers are kept entertained by a steady diet of raven antics. Merlina features prominently because she has bonded closely with the Ravenmaster. (She lives in her own special enclosure beside Skaife’s house at the Tower.) Regularly, the two engage in ‘conversations’ with one another, clicking back and forth in greetings that are posted as short, comical clips on Vine. “It’s just me and her acknowledging that the other is there,” Skaife says.

Fans find delight and humor in the birds. “I love how every picture of a raven looks like that raven has just put out a heavy metal album and that’s the cover,” one Twitter user wrote of the Ravenmaster’s characterful corvid close-ups. Others routinely share pictures of their raven-themed tattoos. (Skaife recently broadcasted his own tattoo of a raven jester on Instagram.)

But interactions aren’t always so positive. Many people take issue with Skaife rearing ravens in the confines of the Tower building, lambasting him for keeping them captive when they could be wild and free. Skaife is keen to make people understand that not only is he upholding a centuries-old tradition, but also that the birds are encouraged to be as wild as possible at the Tower—which is why he refrains from teaching them human speech or reining in their predatory instincts. Recently, Merlina spied a sleepy pigeon on the lawn and swiftly killed it, plucking out a shower of bloody feathers before a crowd of shocked onlookers. Children shed tears. But Skaife shrugs. “They’re hunters,” he says.

Skaife hopes to use these platforms to do more than merely entertain. He wants his message of stewardship to influence the way people treat birds beyond the Tower’s walls. This may be especially true for wild ravens, those 'harbingers of doom,' which are up against a history of mistrust and persecution around the world.

“[The ravens] are woven into the fabric of the Tower’s history," Skaife says. "For whatever reason, they’re here, and all the time that they are here, it’s my job to ensure that as many people as possible get to understand how beautiful they are." Scrolling through the Ravenmaster’s esoteric and vibrant feeds, it’s clear he’s onto something.