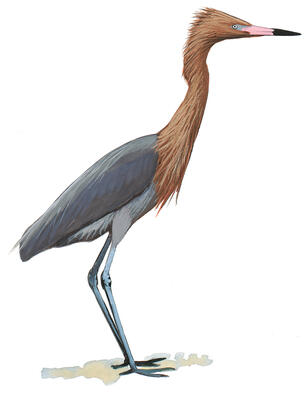 As Hurricane Harvey crept closer to the Texas Coast last August, tensions rose. What would happen to the coastline—and those who lived there—in the face of such a destructive force of nature? Days later, after the storm blasted Corpus Christi and dumped more than 50 inches of rain on Houston, Audubon’s Victoria Vazquez and her team were out in boats to answer that question.

Vazquez, the coastal conservation program manager for Audubon Texas, leads a team of four working to restore and create critical habitat for thousands of migratory birds—including Reddish Egrets, Black Skimmers and Gull-Billed Terns—that pass through the Gulf Coast each year. It was her strong affinity for animals that eventually brought her to Audubon: As a kid growing up in the suburbs of Atlanta, Vazquez regularly asked her family’s veterinarian if she could work for him. She held him to his word when she turned 15. She then went on to study biology, homing in on diseases in amphibians for her doctorate work. A series of conservation projects across the country followed, each targeting different species and habitats. “I really feel very strongly that helping all animals is what I’m meant to do,” Vazquez says.

After Harvey, Vasquez and her team found glimmers of hope amongst all of the destruction. Many of the barrier islands in Galveston Bay made it through unscathed, and they even helped prevent storm-surge damage along that area of the Texas coast.

Other islands didn’t fare so well, though. Harvey tore eight acres off of Chester Island in Matagorda Bay—one of the most important bird nesting sites in the region. Vazquez’s team had worked with the Army Corps of Engineers to add 26 acres of habitat to this island, a project that had just come to completion. “To then quickly lose about eight acres, that just makes our work that much more difficult,” she says.

In addition to surveying habitat, Vazquez and her team worked on a number of rookery islands to unearth vegetation buried by storm-driven sand, remove debris, and plant trees. Over the next few months, she’ll continue boating out to island nesting sites to monitor how bird populations and vegetation swamped by saltwater during Harvey may change in years to come.

To help Texas weather future storms, Vazquez and her team are working with the Army Corps of Engineers once again, this time to build four new islands in Matagorda Bay. Those islands, created with dredge spoils hauled up from a local shipping channel, will provide critical roosting and nesting habitat for thousands of resident and migratory birds. The more islands available for nesting, says Vazquez, the more resilient bird populations will be to future devastation. A feasibility study for this project will be completed by December.

When approaching her work, Vazquez knows she must strike a balance between the needs of people and birds along the busy corridor of the Gulf of Mexico, where shipping and development fuel the economy. But as the ecotourism industry strengthens in the region, those needs increasingly go hand in hand. “There are many people who come to the Texas coast just for birds, so providing habitat for them is critical to the economy,” she says.

Reflecting on her path from veterinary clinic to defender of Texas avifauna, Vazquez says her most formative role models growing up were her hardworking parents, who instilled in her a willingness to keep pushing even when faced with adversity on the level of a hurricane. In particular, she attributes her focus and determination to having a father who never treated her any differently than her brother. “There was never a ‘girls should behave this way’ kind of thing,” she says. “There was never any holding me back in any way.”