The Arctic National Wildlife Refuge is threatened with oil and gas development until Congress permanently protects the vital wildlife habitat once and for all. 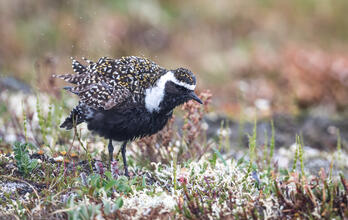 The Biden administration took a major step on Tuesday toward unraveling one of its predecessor’s most significant policy successes, one sought by Republicans for four decades and only achieved in the final moments of the Donald Trump presidency.

On Trump’s last full day in office, the U.S. Department of the Interior issued nine leases that gave three companies rights to drill for oil in Alaska’s Arctic National Wildlife Refuge, a 19.3 million-acre wild expanse that serves as the nesting grounds for migratory birds from every state and six continents. The leased tracts are in the 1.6 million-acre coastal plain between the Brooks Range and the Beaufort Sea, which provides denning habitat for endangered polar bears and calving grounds for the Porcupine caribou herd. The Indigenous Gwich’in, who rely on the herd for their subsistence and traditions, call the coastal plain The Sacred Place Where Life Begins.

But on Tuesday, Interior announced that it is suspending those leases and all oil and gas activities in the refuge until it can complete “a comprehensive environmental analysis” of the leasing program. Interior will use that analysis to determine whether it should reinstate the leases, add new conditions, or cancel them altogether.

The new environmental analysis is needed because an earlier one by the Trump administration was marred by “legal deficiencies,” according to a secretarial order issued Tuesday by Interior Secretary Deb Haaland. That assessment echoed environmental groups, including Audubon, that sued Interior last summer over what they described as a deeply flawed process leading to its decision to allow leasing in the refuge. The Trump administration downplayed the environmental impacts of its leasing plan, they argued, even as it admitted that implementing the plan could cause bird extinctions.

Haaland’s order says the Trump administration failed to seriously consider alternatives to its leasing program and misinterpreted the 2017 tax law that Republicans in Congress used to push the program forward. (An Interior spokesperson did not respond to requests for clarification about the nature of that misinterpretation.) Haaland gave agency leaders 60 days to publish a formal notice of intent to begin the new analysis.

The move was not unexpected—President Joe Biden ordered a temporary halt on energy development in the refuge on his first day in office—but is nonetheless a significant blow to efforts, long supported by Alaska’s political leaders, to drill there.

The head of the Alaska Industrial Development and Export Authority—a state economic development corporation that holds seven leases in the refuge—disputed Interior’s assertion that the leasing program was flawed. “The Department of Interior has yet to provide AIDEA with documentation of any deficiencies that would warrant a suspension of leases,” said Alan Weitzner, the group’s executive director, in a press release. “We’re extremely disappointed in the Biden Administration’s effort to prevent Alaska from lawfully and responsibly developing its natural resources as agreed and provided for under ANILCA”—a federal law that designated most of the refuge as wilderness but authorized oil and gas exploration on the coastal plain.

AIDEA did not say if it would fight the decision in court. Nor did the Alaska Oil and Gas Association, which likewise said it was “disappointed” in the lease suspension. “No one is better equipped to drill safely in Alaska’s Arctic than Alaskans,” said Patrick Bergt, the group’s regulatory and legal affairs manager, in an email. “We hope the Biden Administration will recognize this fact and allow Alaska to chart its own course.”

The refuge remains at risk from development until Congress changes the tax law that required lease sales there.

Environmental groups praised Tuesday’s decision while also emphasizing that the refuge remains at risk from development until Congress changes the tax law that required lease sales there. “Suspending these leases is a step in the right direction and we commend the Biden administration for committing to a new program analysis that prioritizes sound science and adequate tribal consultation,” said Kristen Miller, acting executive director of the Alaska Wilderness League, in a statement. However, Miller added: “Until the leases are canceled, they will remain a threat to one of the wildest places left in America. Now we look to the administration and Congress to prioritize legislatively repealing the oil leasing mandate and restore protections to the Arctic Refuge coastal plain.”

Green groups also argued that Republicans in Congress misled the public when they inserted a provision in the 2017 tax bill that required two lease sales in the refuge by 2024. At the time, Alaska’s congressional delegation touted an anticipated $900 million windfall from leasing over a decade. The sale in January—the first ever in the refuge—brought in less than 1 percent of that revenue, just $14.4 million to be shared evenly by the state and federal governments. “Congress opened the Refuge to drilling on false claims about big money and jobs,” said Kristen Monsell, senior attorney at the Center for Biological Diversity, in a statement. “It has to set things right, end its leasing mandate, and kill these leases outright.”

Tuesday’s press statements were much different from those issued by the same groups last week over a different fossil fuel development on Alaska’s North Slope. On May 26, the Justice Department filed a legal brief defending a massive ConocoPhillips oil project that the Trump administration approved and that environmental groups sued last year to stop. When fully developed, the Willow project could pump 100,000 barrels of oil per day from the National Petroleum Reserve-Alaska, another sprawling tract of federal land in the state’s far north that includes essential habitat for geese, shorebirds, caribou, and other wildlife. Bergt’s group responded to that news with praise for Biden and Interior leaders, while environmental groups blasted the administration for undermining its own goals in fighting climate change.

The contrast suggests that, with only a slim Democratic majority in Congress, the Biden administration will have to walk a fine line in implementing the policies it has touted—including a campaign promise to ban federal oil and gas leasing—as crucial steps to wipe out carbon emissions economy-wide by 2050. Suspending a handful of leases isn’t enough to rein in climate change, the biggest threat to birds. But these particular leases represent the closest the country has come to developing one of its wildest, most bird-rich places, and now, maybe the closest it ever will.