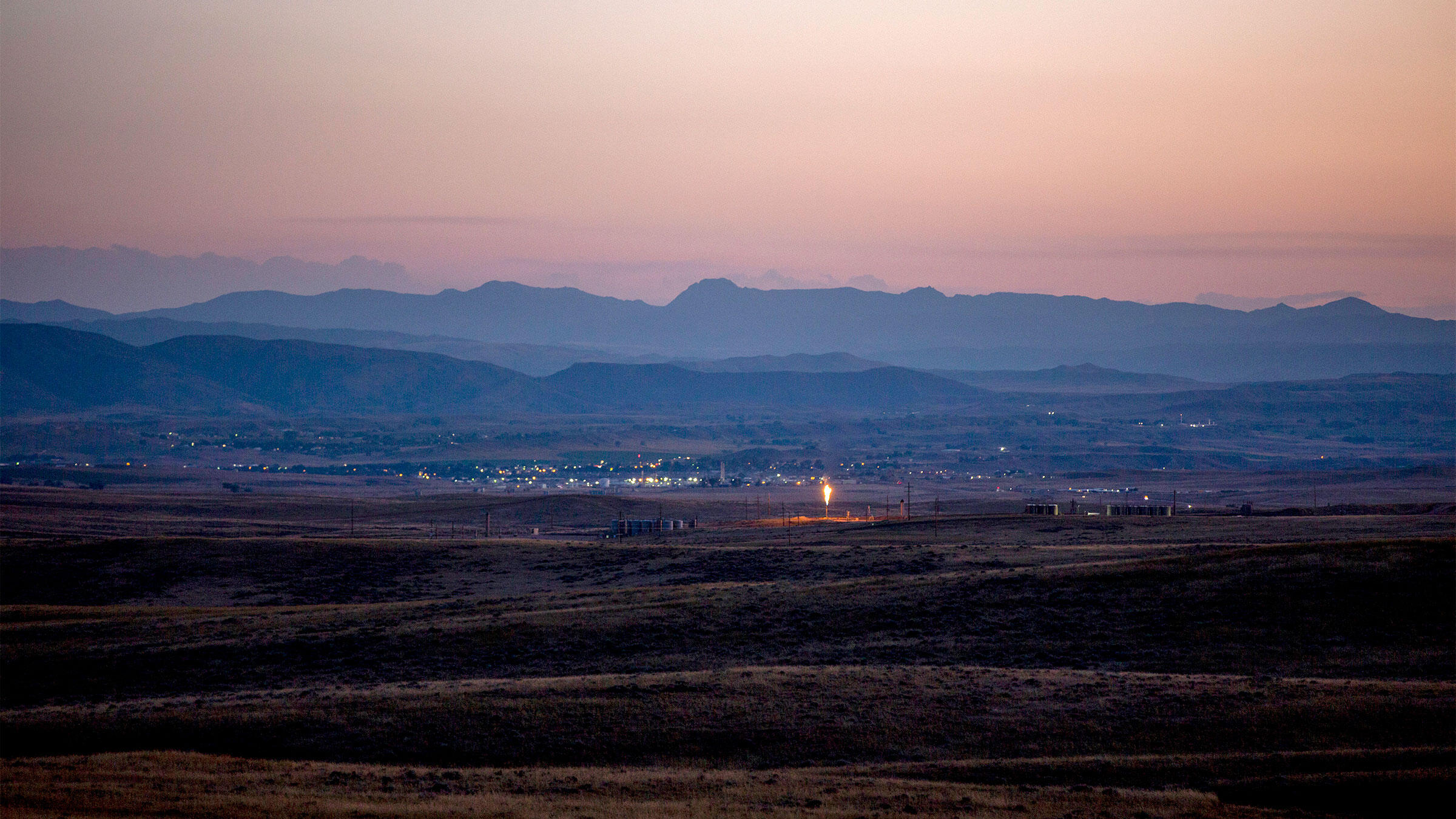 Candidates Are Promising to End Federal Oil and Gas Leasing. But Can They?

The answers aren’t clear, and neither are the politics.

With primary and caucus season impending, Democratic presidential candidates have compelling political and planetary reasons to stake out a climate policy that looks a lot different from President Donald Trump’s. One recent poll found that an overwhelming majority of Americans see climate change as a major problem or crisis, and two-thirds—including nearly one in four Republicans—disapprove of Trump’s approach to the issue. Meanwhile, scientists warn that, to avoid catastrophic consequences, we must rapidly wean ourselves off fossil fuels to keep worldwide warming below 1.5 degrees Celsius above pre-industrial levels. The planet has already warmed by about 1 degree on average.

About a quarter of the nation’s carbon emissions come from coal, oil, and natural gas extracted from federally managed land, so it’s no surprise that a keep-it-in-the-ground thread runs through the plans candidates have laid out for public lands. The top four Democratic hopefuls in national polls have all made similar promises. Elizabeth Warren pledges that, on her first day in the White House, she will “sign an executive order that says no more drilling — a total moratorium on all new fossil fuel leases” offshore and on public lands. Bernie Sanders says he’ll “immediately end all new and existing fossil fuel extraction on federal public lands,” and “ban offshore drilling.” Pete Buttigieg plans to “ban new leases on public lands of fossil production” and halt offshore drilling on day one as president. And Joe Biden pledges an immediate executive order “banning new oil and gas permitting on public lands and waters.”

To many voters deeply worried about rising seas, melting permafrost, ecosystem collapse, and other signs of unraveling natural systems, these commitments are cause for hope. To industry supporters, they’re anathema; in October, William Perry Pendley, the acting director of the BLM who has formally represented energy industry clients, told a gathering of the Society of Environmental Journalists that such policies are “absolutely insane.” But all the controversy might obscure a larger question: Can a president legally do what the candidates are promising?

“The short answer is yes and no,” says Kyle Tisdel, staff attorney and climate and energy program director with the Western Environmental Law Center.

First, the no. An outright ban would require an act of Congress, legal experts say, and could not be accomplished by the president alone. Energy company lawyers would pounce on any effort to stop drilling via executive order. “A ban on leasing is outside of presidential fiat,” says Kathleen Sgamma, president of the Western Energy Alliance, an industry group. “It would be contrary to the Mineral Leasing Act and the Federal Land Policy and Management Act, which identifies oil and natural gas development as a primary use of multiple-use public lands.”

Depending on the makeup of Congress after the election, it's possible lawmakers could step in to end federal leasing. On Tuesday, Chair Raúl Grijalva (D-AZ) and other Democrats on the House Natural Resources Committee introduced legislation that aims to achieve net-zero emissions on federal lands and waters by 2040. The bill would promote renewable energy on public lands, increase the royalties companies pay for extracting fossil fuels, and use those proceeds to help communities whose economies are impacted by the transition to cleaner sources of energy. It also would place a moratorium on new public-land leasing for at least one year while federal agencies produce a plan to reach the 2040 goal. Leasing could only resume if it lined up with the plan to reach net-zero emissions.

Presidents might not be able to execute a ban, but they do have some authority to place a temporary moratorium on new leasing, or to withdraw some areas from lease sales. In 2016, for example, Sally Jewell, then the interior secretary, issued a moratorium on most new federal coal leases while the Obama administration undertook a comprehensive review of the government’s coal-leasing program.

But the fact is, the boundaries of these executive powers are pretty fuzzy. “There’s not a whole lot of real clear, definitive law on some of this,” says Patrick Parenteau, a Vermont Law School professor. For instance, the Trump administration lifted Jewell’s moratorium and ended its review of the coal program in 2017, so there wasn’t a chance to see how a legal challenge, filed by a pair of coal-rich counties in Utah, would play out in the courts. And Parenteau says it may fall to the Supreme Court to sort out the legality of President Obama’s indefinite withdrawal in 2016 of most of the nation’s Arctic waters and much of the Atlantic coast from offshore leasing—a ban, essentially. This past March, a judge ruled that Trump had exceeded his authority in revoking the ban, and reinstated it. The administration has appealed that decision.

The politics involved could also get complicated. Climate may be a major issue for many voters, but addressing the problem through a leasing moratorium could face stiff resistance, including from Democrats, in states where fossil fuels are big business. New Mexico, for example, brought in $2.4 billion from oil and gas leasing in 2018. The recent boom from the state’s slice of the Permian Basin oil field has produced huge budget surpluses and loads of funding for public schools.

As a result, “I don’t see a moratorium happening at all,” Parenteau says. “These extractive resource-dependent states and communities are in a hell of a bind, because they can’t keep doing what they’re doing, and yet, what are they going to do? So any president has got to confront that. The legal issues are almost secondary.”

Ambiguity about how to address the role of public lands in climate change does not dilute the high stakes of inaction, especially for birds. Oil and gas drilling on federal lands is a major threat to the Greater Sage-Grouse and the sagebrush ecosystem it symbolizes, for example, and plans to sell leases in the Arctic National Wildlife Refuge, coupled with the effects of climate change, could lead to bird extinctions, the Trump administration has acknowledged. And as climate change worsens, 389 North American bird species are vulnerable to extinction, a new Audubon science report found. That same climate research shows, however, that if we limit warming to 1.5 degrees, we can improve the outlook for three-quarters of those species.

“As a nation, I don’t think we can address the climate crisis without taking a hard look at the management and development that takes place on our public lands,” says Tisdel, one of several Democrats vying to represent New Mexico’s 3rd District in the U.S. House. “We’re talking about, what would it take to actually end the leasing program altogether? Quite frankly, I think that’s a critical step in the context of the climate crisis that we’re in the midst of."