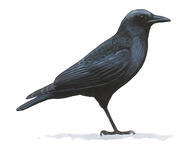 I apologize in advance for this. I know you were just getting comfortable with those pesky IDs—particularly with telling those big honkin’ Common Ravens and crafty little American Crows apart. You know about the bill size. You memorized the vocal difference. You were all set with the tail shape. But now I’m going to go ahead and throw a wrench in things.

Please don’t kill the messenger. It’s my duty as an informative bird guy to tell you that it’s not quite as simple as “crow” or “raven.” There are actually three main crow species in the United States, and they’re a real pain to tell apart. Across the mainland you may find American Crows, Fish Crows, and Northwestern Crows.

(We’ll save the two species of ravens for another day because we’ve got already enough to worry about. Likewise, we won't discuss the Hawaiian Crow, which is extinct in the wild, or the Tamaulipas Crow, which used to be common only at a landfill in Brownsville, Texas, but is seen very rarely now.)

Don’t stop wincing, because here’s the worst part: All of these species look nearly identical to each other. They’re each entirely black, and they’re close to the same size, with the American Crow averaging the largest. In general, if you see a crow but it doesn’t make any noise, you’re not going to be able to make a positive ID. No one can . . . not with 100 percent certainty. Not even the pro birders. Not even me!

Look on the bright side though. Having species that look the same means we only have to worry about one thing: their calls.

But before we get to sounds, there are other clues that can help us narrow things down. Most important is range. American Crows are by far the most widespread of the three species; its year-round range pretty much spans the boundaries of the Lower 48. It’s not exact though—they’re not often seen along the U.S.-Mexico border, and are only found in northern Montana, North Dakota, and Minnesota in summer. But it’s pretty close. Good job, America; you did one thing right.

Northwestern Crows, on the other hand, have a very narrow range, extending from northwestern Washington and hugging the Pacific Coast, up through southern Alaska to about Kodiak Island. There is some overlap between American and Northwestern Crows around Seattle and the British Columbia coast, so be very mindful if you’re birding there.

Meanwhile, Fish Crows live on the opposite side of the country. They can be found along the Atlantic coast from southern Maine to Florida, and up along the Gulf Coast to eastern Texas. They're also found throughout the eastern and southeastern coastal plain, and up the Mississippi River as far as Illinois and Kansas. But the American Crow covers that range, too, so we have to delve a little deeper.

The general understanding is that Fish Crows are typically found around water (after all, that's how they get their name—though they’ll eat close to anything). Almost all the crows I see on my typical dog-walking-and-birding route along the Anacostia River in D.C. are Fish Crows. I do see the occasional American Crow along the river, and sometimes I encounter Fish Crows where there’s no water close by. When I used to live in Maine, for instance, the most reliable local spot for the species was the Wendy’s dumpster. Likewise, Northwestern Crows are most always found near water . . . except when they’re not. So, what I’m saying is that despite what people may tell you, don’t put too much weight on habitat.

What is really comes down to for each of these crows is the voice.

Let’s use the American Crow’s voice as the baseline, given that it's the most common. It has a wide repertoire, but is best know for its classic cawww call. Listen on the right.

You know that call, right? (It sounds like autumn, to me . . . I don’t know why.) Anyway, that’s a classic American Crow talking, with that drawn out awwwwwwww ending. This one is another common one. Notice the series of short caws, some of which also have a drawn-out ending.

In comparison, Fish Crow caws sound much more nasal—as in Fran Drescher nasal. One of their common calls reminds me of a kid holding his nose, refusing to eat his broccoli. Uh huh.

The Fish Crow’s other call, the caw-caw-caw, is sharper than the American Crow’s, and never pulls out the awwwwwwww.

It’s tougher if you’re in Northwestern Crow territory: They have very similar voices to American Crows in places where their ranges overlap. To me, Northwesterns sound closer to someone yelling in fright like “ahhhhhh,” than the more rounded cawww of an American Crow.

Some expert birders from the region don't even think they're a separate species. Chances are, the Northwestern Crow will eventually will be lumped with American Crow, so count it while you can.