On July 10, Emma Rhodes and Andrew Haffenden from Birmingham Audubon’s Coastal Programs puttered out to Sand Island off the coast of Alabama to check for breeding activity. They were astounded by what they saw: a huge Least Tern colony of nearly 600 nests on the two-acre sandy stretch offshore of Dauphin Island in Mobile Bay. Elation quickly turned to concern, however, when closer inspection revealed that tragedy had struck hundreds of eggs in the newly discovered colony—spurring the team to move quickly to safeguard the remaining nests and ensure the surviving eggs had a chance to hatch.

Rhodes and Haffenden found abandoned plastic tent poles, an erected volleyball net, and about 30 Least Tern eggs stacked in small piles and arranged decoratively around wide mounds of sand. Human hands must have plucked the eggs out of their simple sand nests, likely to clear the beach for a volleyball game, says Katie Barnes, coastal senior biologist for Birmingham Audubon. “It’s really hard to imagine how someone could do that to a little egg,” she says.

Around the makeshift volleyball court, Rhodes and Haffenden counted at least 100 abandoned nests—likely an underestimate, as they didn’t want to disturb the colony to get a more precise count. Each nest held one to three dead eggs that had cooked on the sand when the human disturbance forced the parents, whose bodies shield their unhatched young from the hot sun, to flee, Barnes says.

Even just a few hours of exposure to the heat is enough to kill the chicks growing inside eggs, says Roger Clay, a wildlife biologist with the Alabama Department of Conservation and Natural Resources. Some of the eggs Haffenden and Rhodes saw piled together showed signs of pipping, or cracks in the shell made by a chick, and were likely close to hatching before they were moved.

“What was really sad,” Barnes says, “[is] there was a bird that was still trying to incubate her egg in that pile.”

Birmingham Audubon lost no time in protecting the remaining nests. Barnes notified the U.S. Fish and Wildlife Service because Least Terns are federally protected under the Migratory Bird Treaty Act; the agency has since opened an investigation, led by the Department of Justice. She also called the state conservation agency, which added the speck of land to its patrol route to keep an eye on the terns and protect against future human interference.

And the following day, she and her team returned to the colony to erect signs (including federal warning signs provided by USFWS) and fence off the colony with neon yellow rope and metal posts. When they left on July 11, the sandbar was still home to some 1,200 actively nesting Least Terns and a handful of Black Skimmers.

So far, there have been no signs of human activity on the island after they installed the fencing and signs, Barnes says.

Barnes and her team are part of a year-old initiative by Birmingham Audubon to monitor and protect the state’s coastal birds, called the Alabama Coastal Bird Stewardship Program. This year, the program has focused on gathering detailed data about where these birds nest and their success. It has been a “tremendous help,” Clay says, as the state has limited resources to monitor and protect shorebirds.

The data Birmingham Audubon collected this year show that Least Terns are in a tight spot in the state. While the birds return to mainland beaches year after year to breed, many of their eggs and chicks are eaten by mammalian predators like coyotes and foxes. Even on Dauphin Island, a Globally Important Bird Area connected to the mainland by a three-mile bridge, foxes are getting to the terns, says Barnes.

The sandbar where volleyball players disrupted the tern colony, however, is completely disconnected from the mainland and is free of land predators; the birds have to contend only with avian predators like Laughing Gulls. That might be one reason this spot was so popular, Barnes says, drawing some 1,200 adult terns. The birds are still exposed to serious risks, though. Since Birmingham Audubon started monitoring the beach, the shorebirds have been protected from human disturbance, but storm surges and high tides have wiped out an estimated 30 to 40 nests.

When Barnes visited the colony soon after her team discovered it, she was surprised to see many birds still sitting on eggs rather than raising chicks. They were behind schedule, given that Least Terns typically nest in May and June and start raising and fledging chicks in July. She suspects some of the birds nesting on this island initially tried elsewhere on Alabama’s coast; after their first nest failed, they found their way to this colony. Some of these birds may have even started over after volleyball players wrecked their initial nests.

Despite the birds’ efforts, they failed to make up for the losses from the volleyball incident and other stressors. Just 83 birds fledged out of 600 nests this season, as late as August 2. Even fewer may have survived without the extra surveillance and fencing, Barnes says. The Least Terns have since departed the island.

If this little strip of sand is still there next summer—a big if in the hurricane-prone Gulf of Mexico—Barnes says she’s planning on pre-fencing the whole area to head off another beach-day tragedy. Ultimately, she hopes this devastating event will help raise awareness about beach-nesting birds and how to respect their boundaries. Already in the first day after Ben Raines first reported about the colony for AL.com, six new volunteers have signed up to help Birmingham Audubon monitor beaches for nesting shorebirds. Audubon has guides, including Sharing the Shore and the Coastal Bird Stewardship Toolkit, to help other aspiring shorebird stewards. 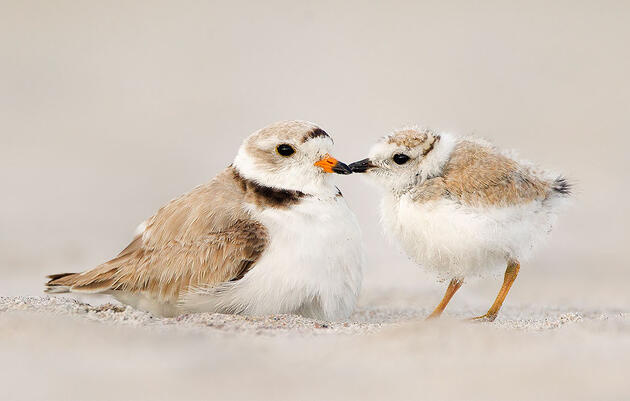 How to Become a Bird-friendly Beachgoer

Going to the beach is great, but people aren’t the only ones who enjoy it. Here’s how you can protect shorebirds while soaking up the sun. 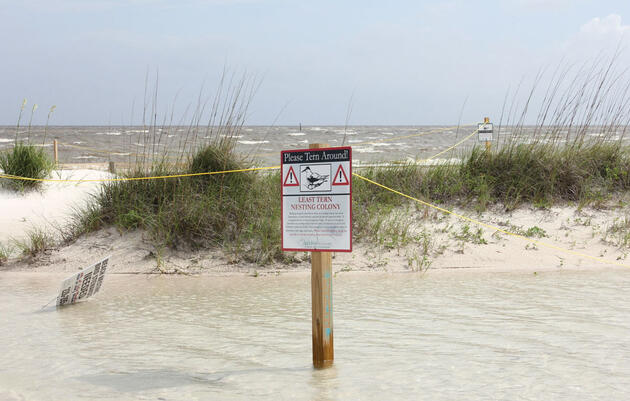 Without coastal restoration that makes beaches less vulnerable to storm surges, climate change will be a threat, and not just from sea level rise. 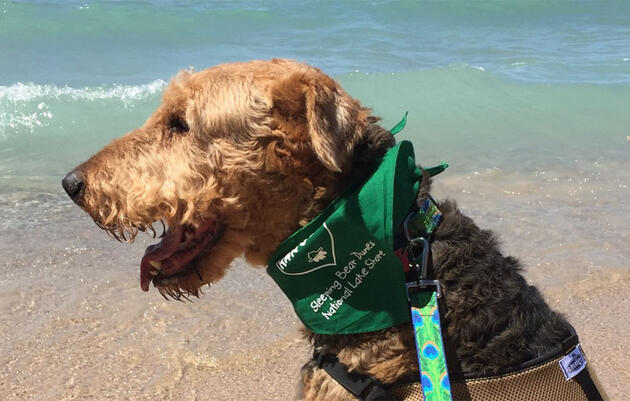 New outreach programs in national and state parks turn canine foes into friends of nesting birds and other wildlife.