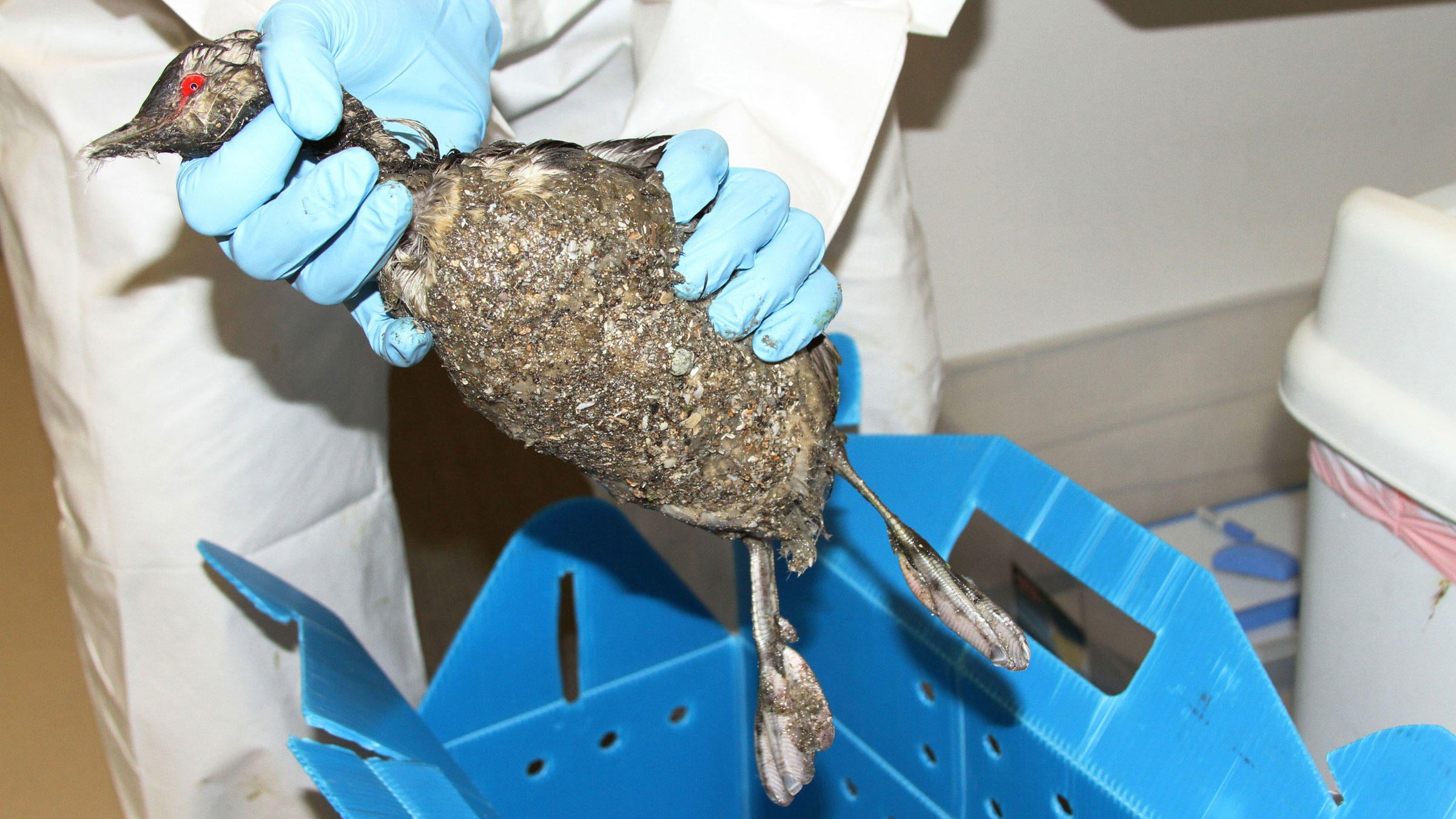 With dead ducks and grebes washing ashore in San Francisco Bay, how do wildlife organizations cope with puzzling toxic spills?

The goo-covered birds began washing up on the eastern shores of San Francisco Bay the night of Friday, January 16. Unsteady on their feet, dozens of waterbirds, mostly fowl, huddled together on the rocky beach. Rescue workers noticed that each one was coated in a strange, waxy substance. “I've never seen anything that looks like this [goo]. It looks very much like rubber cement to me, like if you’d played with it all day—kinda dirty,” says Barbara Callahan, interim executive director at International Bird Rescue, the organization that's leading the rehab efforts.

That first night, workers found 69 birds; the number has since risen to 474. Nearly one-third of the victims, a mix of Surf Scoters, Horned Grebes, Buffleheads, Common Goldeneyes, and scaup, have died. The as-yet unidentified substance strips the birds’ carefully aligned feathers of their insulating power, causing hypothermia. They also preen excessively to remove the coating;  in some cases they become so focused on the endeavor that they stop eating and starve to death.

So far, all of the survivors have been cleaned off with a mixture of dish detergent, baking soda, and vinegar at International Bird Rescue's San Francisco Bay Center. It’s the only combination of ingredients that gets the goo off, says Callahan.

Callahan believes that the mysterious substance is no longer seeping into the bay, because no other birds have washed up since January 22. “It was very localized event,” she says. “There was no product on the beach, and the Coast Guard never saw product from the air.” International Bird Rescue is footing the $10,000-a-day cost of cleaning, feeding, and releasing the birds, because state and federal agencies only allot money to petroleum spills. Audubon California's Jordan Wellwood wrote in the San Francisco Chronicle, "The wildlife agencies have done an admirable job of responding to this crisis, but they have been woefully constrained by lack of funding and protocols for dealing with this type of emergency."

Similarly baffling situations have arisen in the past. This latest incident parallels two separate events in 2013; in each incident, a waxy gunk drifted into British seas, killing more than 4,000 seabirds. “It was a mystery substance for about two or three weeks,” says Alec Taylor, marine policy officer for the Royal Society for the Protection of Birds (RSPB) in the United Kingdom. In both cases, lab tests identified the culprit as polyisobutylene, or PIB, an industrial synthetic rubber that is used to make everything from plastic wrap to lipstick. It’s a colorless and odorless substance that, like whatever covered the California birds, messes with birds’ ability to insulate.

Taylor says that the source of the PIB pollution in Britain was never found. Cargo ships might have flushed it when they cleaned their holding tanks between ports, he says. This was a common, often legal, practice in ships that carry industrial synthetic and chemical products.

But the mass seabird die-off in 2013 changed that. RSPB, with the support of several other conservation organizations and the British government, convinced the International Maritime Organization to reclassify particularly viscous and reactive forms of PIB as harmful products. Now it’s illegal for any ship to flush those products into international waters.

PIB isn’t to blame for the latest die-off; laboratory analysis has ruled it out as the cause of the San Francisco Bay catastrophe. The California Department of Fish and Wildlife is continuing to test samples of the goo, provided by International Bird Rescue, in its Sacramento Laboratory. Mary Fricke, from the Department's Office of Spill Prevention and Response, says she doesn’t know how long it will take to identify the substance. “When we have determined the substance,” she says, “we can look into the source of the goo.”

As they wait for an answer, wildlife rehabbers find themselves charting unknown territory. Unidentified spills require new cleaning techniques, time-consuming detective work, and funds for rehabilitation—all things that the government doesn't supply. While Callahan says she understands the pressures that government and state departments face, ultimately, the lack of institutional support has left conservation groups and their volunteers to tackle this mystery threat alone. “There has got to be some other way to care for these animals.”

The problem isn’t just confined to the United States. Across the globe, conservation groups are trying to get around this problem by identifying potentially harmful products before they cause environmental ruin. The RSPB is pushing for shipped substances like paraffin waxes and palm oils, which can also coat birds in deadly gunk, to be reassessed on an international level like PIBs have been. But that will take time, Taylor says.

In the meantime, the people at International Bird Rescue are focusing on bringing as many birds back to health as they can. On January 28, the group released the first batch of rehabilitated birds. From a launching point near the Golden Gate Bridge, the gang of 23 scoters and a lone scaup waddled into the sea, where they belong.