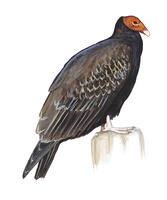 During a normal year, the arrival of spring prompts a continent-scale movement not just of birds, but of birders. With their guided walks, educational programs, and camaraderie, birding festivals in many states draw in droves of nature-loving visitors, some of whom travel almost as far as the birds themselves.

But this is not a normal year. While the birds are still coming, the outbreak of the global COVID-19 pandemic—which government health officials now expect to kill between 100,000 and 240,000 Americans, even with tough stay-at-home orders—means that the birders are not.

In an effort to observe social-distancing rules and contain the spread of the disease, organizers of a growing list of birding festivals from South Texas to Northern Michigan have canceled this year’s festivities or are facing the fact that they’ll likely have to. And that’s having harsh effects on the restaurants, hotels, small businesses and community organizations in their host towns, during a time that already sits uncomfortably between the winter and summer tourism seasons.

Nowhere is that impact more apparent than in Ohio with its many bird festivals. Best known among them is the Biggest Week in American Birding, a 10-day festival celebrated for up-close encounters with some three dozen warbler species, from eye-popping Blackburnian to understated Worm-eating. In its 10-year history, the festival has helped to market northwest Ohio on a global scale, drawing visitors to the area from every state, 52 countries, and six continents, according to Kimberly Kaufman, executive director of the Black Swamp Bird Observatory, which developed the event. Kaufman’s group conducted a 2013 study which found that the 77,000 visitors who attended that year injected $37 million into the local economy. “In a normal year, the area has embraced birding on a level that’s just astonishing,” she says. “And the downside is that when you have a catastrophic event like this, it’s devastating.”

The shortage of visitors will hurt local businesses like hotels and restaurants, some of which Kaufman says didn’t open until summer before the festival began drawing a crowd in spring. “It’s a huge thing for our area,” says Brenda Lowe, owner of Blackberry Corners, a small family restaurant in Martin, Ohio, where Biggest Week attendees often enjoy a slice of Lowe’s famous “Lifer Pie” to celebrate seeing a new species. “It’s a good part of my summer income.” And the loss goes deeper than the bottom line, she adds. “I'm disappointed that I won't be seeing all of my birding friends that I have really grown to love and appreciate.”

The decision to cancel is also dealing a blow to the organizations that host the festivals. Audubon Nebraska typically raises around $300,000 each March, when Sandhill Crane migration draws some 25,000 people to its Rowe Sanctuary. But this year most visitors had to stay home, and the group was forced to cancel its 50th Crane Fest. It's a loss not only for Audubon's budget, but for the tourism economy in and around nearby Kearney, which bills itself as the “Sandhill Crane Capital of the World.” Most springs the community “welcomes visitors from all over the world, which typically generates $15 million each year,” says Kristal Stoner, the group's executive director. “The hotels, restaurants and local museums were eerily silent this year.”

And with the Biggest Week canceled, Kaufman's group, too, is facing a harsh new budgetary reality. “We’re taking a huge financial hit,” Kaufman says. “We have built up enough of a reserve that we can operate on a limited capacity for at least a couple of months. But the future of our organization is pretty uncertain.”

That uncertainty is also gnawing at organizers working on events held later in the year, like the Rio Grande Valley Birding Festival, held for 27 years in Harlingen, Texas and still tentatively slated for November. The festival draws a fairly reliable 600 people, and last year hosted 125 field trips durings its six-day run, along with workshops and a 90-100 vendor trade show. Those numbers have not varied other than during economic downturns like what the coronavirus has triggered, says festival chair Sue Griffin. According to an unofficial study Griffin conducted in 2017, the festival brings in about $300,000 to Harlingen, part of an overall nature tourism economy in the valley that totaled $40 million. “Our festival is the biggest event for bringing in heads to Harlingen,” she says.

For communities where birding festivals have already been canceled, it isn’t just local businesses that are suffering.

For planners of summer and fall birding events that haven’t yet thrown in the towel, what happens now is anybody’s guess. Festival directors have been talking to each other online, Griffin says, with some arguing it’s better to cancel early rather than to risk having to pay out money that can’t be recouped. The uncertainty and mixed messaging from local, state, and federal governments isn’t making planning any easier. “As of midnight tonight, our county is in shelter in place,” Griffin told Audubon magazine on March 23. “I haven’t been able to get into my office for all of last week and Monday, because the Chamber of Commerce where we’re located is closed to the public.” Griffin says she’s reluctant to make further plans until the mayor assures her he won’t cancel things far in advance. (Editor's note: The Rio Grande Valley Birding Festival has since been canceled.)

For communities where birding festivals have already been canceled, it isn’t just local businesses that are suffering: Community programs are taking a hit as well. Buzzard Day—traditionally celebrated in Hinckley, Ohio with the clockwork annual return of Turkey Vultures on March 15—is one of the nation's oldest birding festivals, running for at least 63 years. The celebration draws around 2,000 people annually, according to Melinda Mallari, secretary of the Hinckley Chamber of Commerce and coordinator of a festival planning committee. (Typically among them, Mallari notes, are a couple from Hinckley who now live in Georgia but return each year to commemorate their first date, which was at Buzzard Day.) After expenses are paid, the event usually generates around $5,000 for scholarships and donations to local police, fire, and other nonprofits and causes, Mallari says.

Birders also pump a lot of money into West Virginia’s Fayette County, where the New River Birding and Nature Festival had gone for 18 years without an interruption before this year’s cancellation. The event usually provides its direct revenues—often around $100,000—  toward the Fayette County Education Fund, a nonprofit that provides outdoor-based leadership programs for local students. While the festival has taken a hit from the cancellation, the educational program, at least, will not see a total loss, says Geoff Heeter, one of the event's organizers. When he and the other planners asked those who had registered to consider taking a voucher for next year or consider leaving a portion of their refund as a donation, they were “absolutely overwhelmed by the magnanimous gestures of the guests,” Heeter says. “Some of them were people who’d never even been here. That’s going to make it easier to keep doing the work.”

Despite the financial costs of the pandemic, festival planners are trying to remain optimistic about the future. In northern Michigan, for example, it was a painful decision for organizers to cancel the Mackinaw Raptor Fest planned for April 3-5, says Kathy Bricker, secretary of the Mackinac Straits Raptor Watch. “It’s minor in the big scheme of things, we realize, but it’s definitely going to be an important hit for our restaurants and hotels,” she says. But the area’s geography—where it’s only about a four-mile jump between the state’s two peninsulas across Lakes Huron and Michigan—makes it a raptor migration hotspot in both spring and fall, and Bricker says she hopes to reschedule this year’s event for when hawks and other birds of prey are headed south.

Kaufman’s team is likewise looking ahead. The staff is heartbroken to cancel this year’s Biggest Week, but their planning will pay off in the long run, according to a message on the festival homepage. “With all the work that's been done for this year,” the note says, “we will be so far ahead of the game next year.”

In the meantime, for communities across the country that depend on birding tourism and the money that comes with it, spring's returning blooms and migrants will be a bittersweet reminder of better years, and another distressing sign of this pandemic's widening reach.