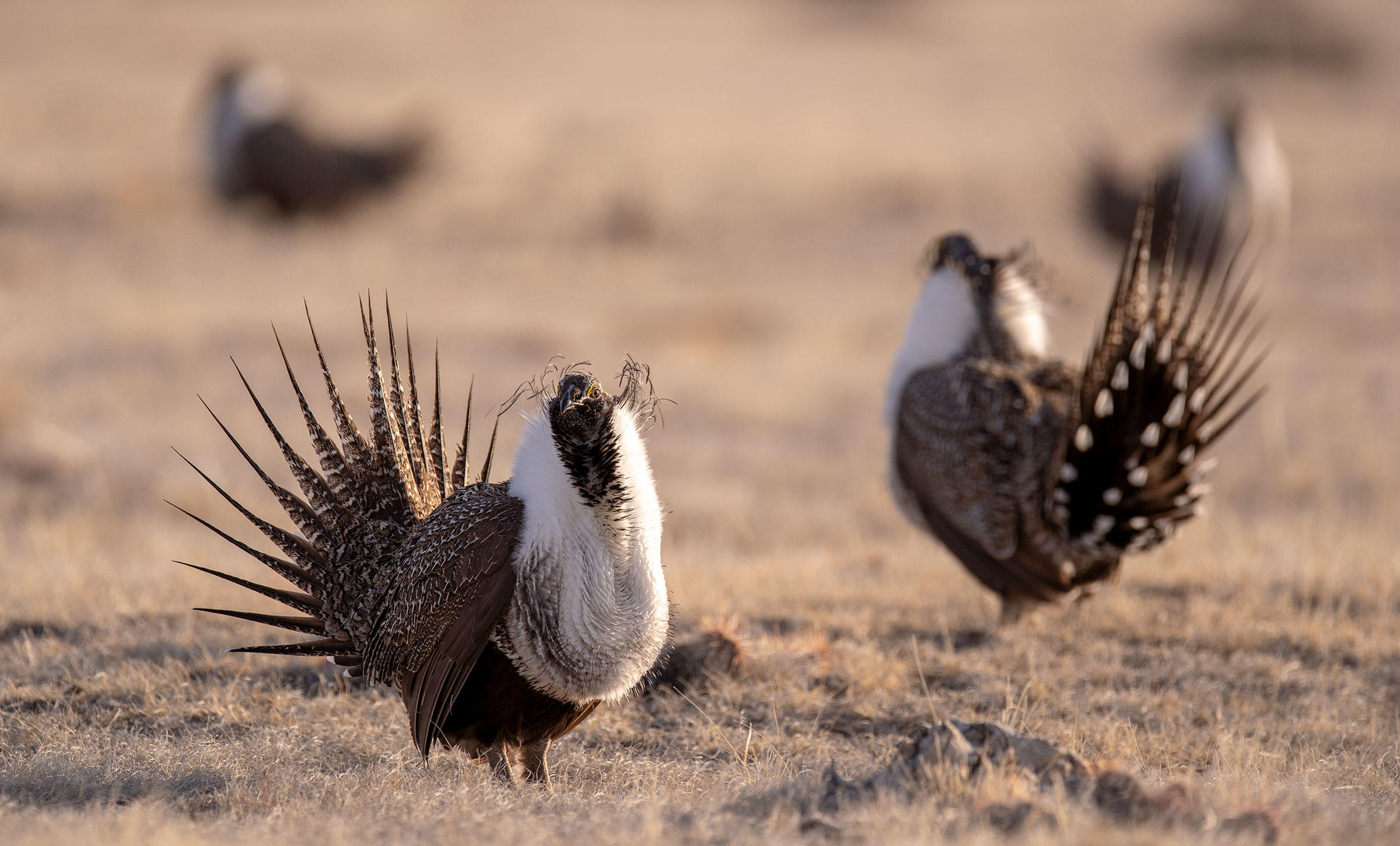 Across the West, Greater Sage-Grouse numbers are plummeting.

So says an August 19 court filing that describes three consecutive years of sharp declines in five states that hold more than 80 percent of the population. Sage-grouse numbers are known to swing widely, but the losses are too big to be explained by those roughly decade-long boom-and-bust cycles, according to the sworn statement by Clait Braun, a retired biologist who studied the birds for the Colorado Division of Wildlife.

Braun’s testimony is part of an ongoing lawsuit by four conservation groups that aims to block sweeping changes announced earlier this year to sage-grouse conservation plans on millions of acres overseen by the federal Bureau of Land Management (BLM). The population figures arrived on the heels of a U.S. Forest Service overhaul of its own sage-grouse plans that conservation groups see as similarly worrisome, and just days after the U.S. Fish and Wildlife Service announced rule changes that could make it harder to protect the imperiled birds under the Endangered Species Act.

Combined with new data showing that the Trump administration is ramping up oil and gas leasing in core sage-grouse habitat, the population loss and recent policy changes deepen worries over the future of the bird and the 350 other plant and animal species that share its sagebrush-steppe habitat.

“What we’re seeing here is a pattern of actions—changes to BLM plans, changes to Forest Service plans, changes to de facto or unwritten oil and gas leasing policy—that all move in one direction,” says Michael Saul, a senior attorney with the Center for Biological Diversity. “It’s a compounding series of multiple threats to the species.”

The new figures, based on spring counts at the Greater Sage-Grouse mating areas known as leks, are “very worrisome,” Braun tells Audubon magazine. “There's no way to sugarcoat it.” The Idaho population, for example, has plunged by 52 percent since 2016, with a 25 percent loss this year alone. Oregon likewise lost a quarter of its sage-grouse in the past year, following two years of more modest declines. In Nevada, the population has shrunk by one-third over the past three years, while Wyoming—which has more of the birds than any other state—lost 28 percent of them since last year. (A news story published after Braun's statement pegged Wyoming’s loss at 21 percent and said the state’s three-year loss totaled 44 percent.) And although the numbers for one of Colorado’s six lek counts aren’t yet final, those with complete data show a 69 percent contraction since 2016.

While the figures are cause for concern, they don't suggest that sage-grouse are as bad off as in the mid-1990s, when numbers hit record lows that triggered new conservation action, said Tom Christiansen, a retired sage-grouse coordinator for the Wyoming Game and Fish Department, in an email. In Wyoming, for example, there were an average of 20.1 males per lek this year, compared to the low of 12.5 in 1996. But the population is edging closer to that territory, he said. “If that does happen in the next year or two, then Katie, bar the door.”

Sage-grouse populations take years to respond to disturbances like oil and gas development, according to Braun's statement, so the decline likely began even before the Trump administration loosened the BLM management plans’ restrictions on development in sage-grouse habitat. The conservation commitments in those plans were the basis for a 2015 decision by federal wildlife officials not to list sage-grouse under the Endangered Species Act. The National Audubon Society and other groups viewed that decision as a win-win that would protect the bird's most vital habitat without the sharp restrictions on development and livestock grazing that a listing under the Act could have triggered. Braun and some others, though, saw it as a missed opportunity to afford the bird more robust protections. Ultimately, there wasn't time to meaningfully implement the 2015 plans before the Trump administration began unraveling what conservationists saw as their key provisions. In March, the BLM lifted restrictions on nearly 9 million acres of habitat zones deemed essential for sage-grouse, leading to legal action.

Conservation groups were similarly outraged by the Forest Service plan amendments published on August 2, which the agency says were designed “to ensure ranchers, permittees, and industry can adapt to their local conditions rather than be forced to conform to a one-size-fits-all, national approach.” Some 200,400 acres of sage-grouse habitat would lose protection under the changes, and other large swaths would be reassigned to categories with less stringent restrictions on development. Another change rewrites a requirement that development projects create a net gain of habitat so they now need only avoid a net loss. After it considers feedback during a 60-day public protest period that ends on October 1, the agency says it will issue a final decision on the changes in the fall.

The Forest Service plans cover a much smaller area than their BLM counterparts—5.2 million acres, compared to about 60 million. But the new changes are nevertheless significant, says Nada Culver, vice president of public lands and senior policy counsel for the National Audubon Society. “These are still important lands,” Culver says. “They connect the BLM lands. They play a very important role and could have provided a backstop.”

Even before changing the rules for development in sage-grouse habitat, the Trump administration aggressively auctioned off leases for oil and gas drilling there, according to a recent analysis commissioned by the National Audubon Society, the National Wildlife Federation, and the Wilderness Society. The report covered seven states with the most sage-grouse habitat on federal land.

And the trend shows no signs of stopping; the BLM is set to offer up another 465,000 acres of sage-grouse habitat for lease this month, according to Culver. Audubon and other plaintiffs sued the Trump administration last year in an effort to halt the sell-off. “It was so egregious that we felt we had to try to stop it,” she says.

Advocates have long warned that continued development in sage-grouse habitat—along with increasingly destructive wildfires that wipe out huge tracts of sagebrush—could eventually trigger a listing under the Endangered Species Act. But now that safety net has some grouse-sized holes. On August 12, the administration finalized new rules for implementing the Act that would, for the first time, allow economic factors to be considered in listing decisions—a change that could have major implications for a bird that does its famous mating dance atop oilfields. The changes, which environmental groups have sued to stop, also end the policy of automatically granting threatened species the same safeguards as endangered ones, so sage-grouse could potentially be listed as threatened but receive little actual protection.

Still, advocates see some reason for hope. On August 21, Wyoming Gov. Mark Gordon signed an executive order reasserting that oil and gas activity should be prioritized outside of the bird’s core habitat, as agreed to in the 2015 federal management plans. Culver says she hopes other governors will follow Gordon’s lead, and that the federal government will respect those state directives. Otherwise, the Greater Sage-Grouse—and the whole sagebrush ecosystem—might find itself in unprecedented trouble. “And that,” she says, “is not something anybody is going to stand for in the West.”

Audubon magazine is a nonprofit that depends on the generosity of our readers. You can support stories like this by making a donation today.