In October, 1961, a local member of an ornithological society delivered to Oscar T. Owre, a biologist at the University of Miami, a gruesome bundle she thought would interest him: a Chuck-will’s-widow found dead in a nearby Florida town.

That find alone was noteworthy; the nocturnal birds are often heard but rarely seen. But what shocked Owre enough to document the specimen in an ornithology journal was what he found when he pulled open the bird’s mouth: Jammed in the esophagus of the Chuck-will’s-widow was a Common Yellowthroat. “Death of both birds would seem to have been by suffocation,” Owre wrote. Lest the discovery be mistaken for some kind of freak collision, Owre also reported what he found next: Inside the larger bird’s stomach was another warbler, this one a Cape May, mostly undigested.

Chuck-will’s-widows typically feed on moths, beetles, and other insects, but there’s solid evidence that, when opportunities arise, they’re game to gulp down much larger winged prey. Owre’s was one of several records in the scientific literature of the birds swallowing whole various warblers, sparrows, flycatchers, and bats. The behavior, roughly analogous to a human housing a Dagwood sandwich in one bite, is just one example of why Chuck-will’s-widows and other members of the nightjar family are some of the strangest, coolest birds around.

“For a long time we just assumed they’re like a bigger songbird, but they’re very much not,” says Elly Knight, a Ph.D. candidate at the University of Alberta whose research has focused on the Common Nighthawk and other nightjar species. “With nightjars you kind of have to throw all your ornithological assumptions out the window.”

No species better embodies the oddness of nightjars than Chuck-will’s-widows. Like some others in the group, the species gets its name from its song. On summer nights in southeastern woodlands, the species can be heard whistling its own name, just like the Eastern Whip-poor-will farther north and the Common Poorwill in dry, open areas of the West.

Chuck-will’s-widows are larger than North America’s other nightjar species but share their general appearance—and it’s a weird one. Squat with short necks and big, flattish heads, they look like someone squished them as you would a hamburger patty. They’ve got little comb-like structures on their middle toes, thought to be useful in grooming. Around their teensy beaks are stiff bristles that scientists think help to funnel food into their mouths. And oh, those mouths. “I often compare them to little Jabba the Hutts,” Knight says. “They have these tiny bills, but then they open their mouths and their head splits open.”

No species better embodies the oddness of nightjars than Chuck-will’s-widows.

It’s that huge mouth—on spine-tingling display in this short video—that allows Chucks, as nightjar fans call them, to scarf the occasional warbler. But that’s just icing on the evolutionary cake—the real need for such a prodigious maw comes from the bird’s nocturnal lifestyle. Unlike owls, which have fine-tuned hearing that allows them to pinpoint prey even in total darkness, nightjars have to hunt by sight. Their big eyes help them see insects in low light, and their gaping cakeholes provide some extra room for error, like playing basketball with a hula hoop for a rim.

Even so, these adaptations go only so far; when there’s not enough moonlight, the birds only forage for an hour or so at dusk, then take the rest of the night off, using their low metabolic rate to make each calorie count. “They have a very, very sedentary lifestyle,” says Ryan O’Connor, a postdoctoral fellow at Université du Québec à Rimouski.

O’Connor wrote his master’s thesis on Chucks and found that their nocturnal behavior isn’t the only reason they’re a tough species to study. Like other nightjars, they are extremely good at blending into their surroundings. “Their camouflage is unbelievable,” O’Connor says. He set out to do a basic study of their breeding behavior—what their nesting sites look like, whether both sexes incubate eggs, how often adults bring food to chicks, and other fundamental data. “Unfortunately,” he says, “since they were so hard to find, we only found six nests.” (Nests is putting it generously. Like other nightjars, Chucks don’t build a structure for nesting. They don’t even make a scrape in the dirt. They just lay their eggs on leaves or bare ground and cover them with their camouflaged bodies.)

Limited as it was, O’Connor’s single paper on a half-dozen nest sites may be some of the best information available on how Chucks breed. “Virtually every aspect of the biology of this species is in need of additional information,” the Cornell Lab of Ornithology reports. “Little is known about its nesting behavior, breeding success, habitat use, and population status, knowledge gaps that are especially troubling.”

Troubling, that is, because nobody really knows if we’re swallowing up the bird’s habitat with urban sprawl or wiping out its main food source with pesticides. Chucks don't appear to be at particularly high risk for now, but their numbers are thought to be declining in some areas. If that's true, it's not only a loss for the ecosystem, but for Southerners who delight in the bird's mysterious, melancholy songs on warm summer nights. 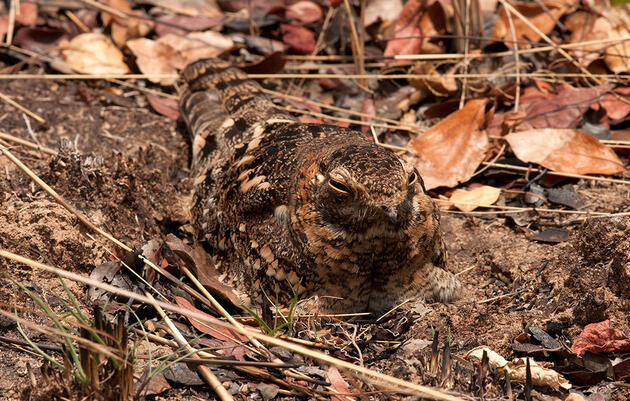 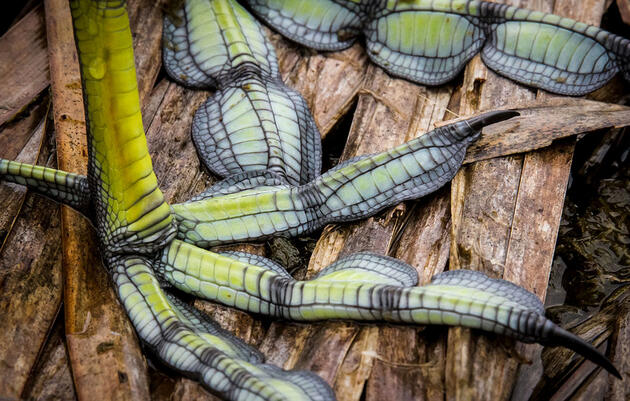 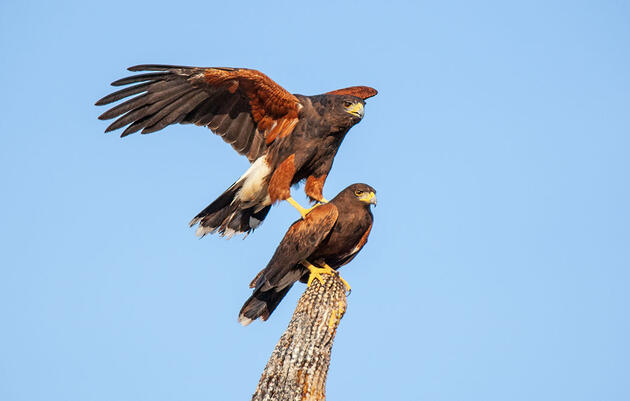 Better Know a Bird: How Harris’s Hawks Hunt Like Wolves to Bring Down Prey

Teaming up helps these agile raptors take on animals twice their size. But we’re still not sure why they stand on each other.