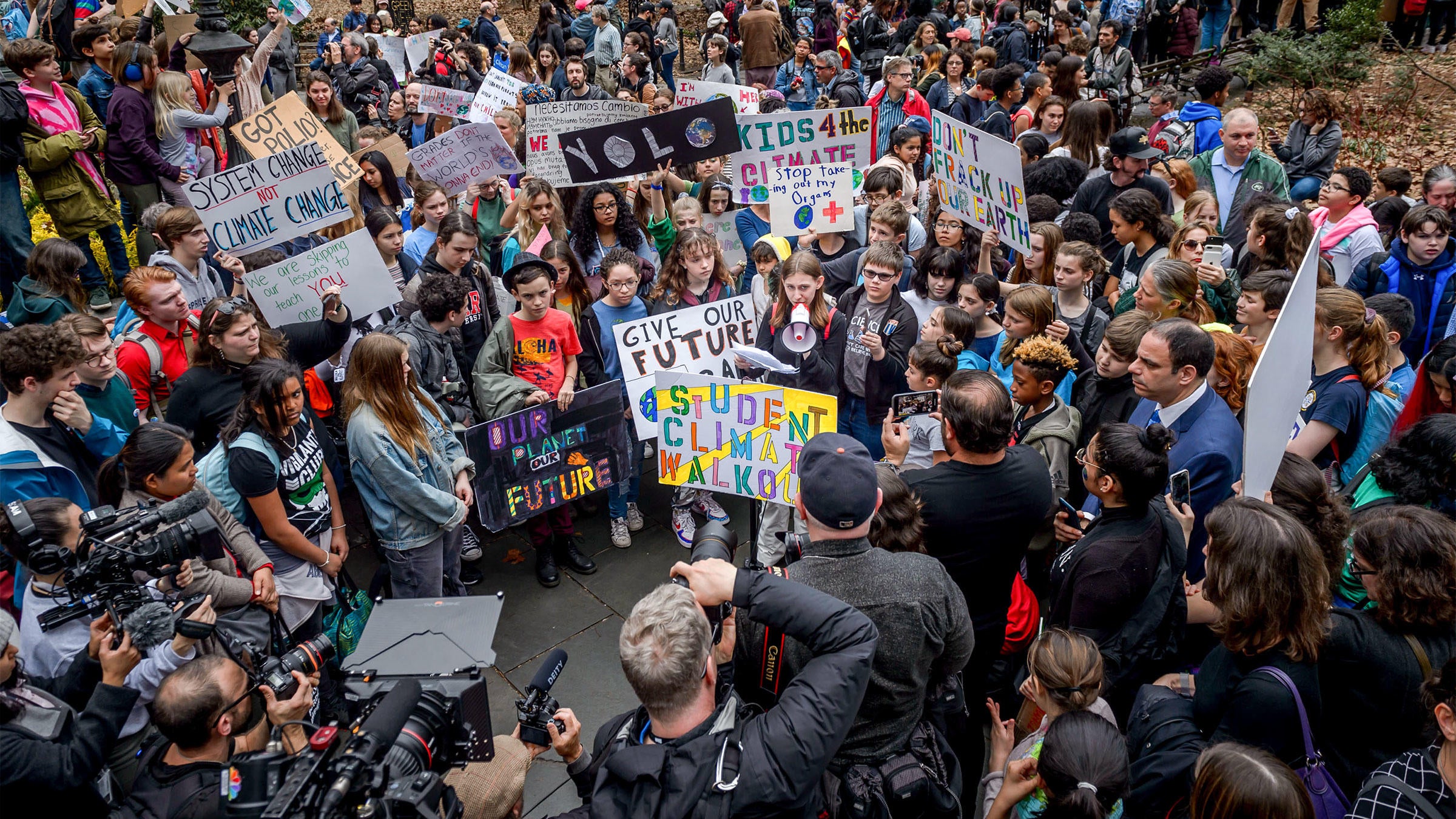 Alexandria Villaseñor, 13, speaks at the climate strike in City Hall Park, New York City, on March 15, 2019. Millions of students across the world walked out of class that day to protest climate change. Photo: Erik McGregor/Pacific Press/Alamy

Jessie Parks is fighting for his survival. The 17-year-old lives in Riverside, California, where he breathes some of the most polluted air in the country. In 2016, researchers estimated that the long-term effects of breathing the region’s foul air sicken 1,416 and kill 808 people a year—a conservative estimate, and one that’s likely to rise given that higher temperatures risk making air quality worse. “I’m not freaked out by climate change in the future,” he says. “I’m freaked out about it right now.”

Parks is one of 1.4 million teenagers from nearly 100 countries across the world who took part in school strikes on March 15 to demand aggressive action on climate change. From California to Kolkata, they marched to protest against elected leaders who they say have betrayed them by not actively working to lower emissions and bowing to the pressure of oil, gas, and coal companies. “It’s common sense that elected officials who are backed by fossil fuels . . . they’re not going to fight for us or our future,” Parks says. “So we have to create change ourselves.”

Today’s teens aren’t being shy about it. Last month Kentucky resident Destine Grigsby, 17, and several others visited the office of Sen. Mitch McConnell (R-KY) in Louisville to ask him what he values more: the fossil fuel industry that has given him nearly $3.1 million since his first election in 1984, or the health and safety of the young people he represents in Congress. McConnell denies the science of climate change, and has stated that “for everybody who thinks it’s warming, I can find somebody who thinks it isn’t.”

McConnell’s staffers told Grigsby that the senator wasn’t available. Undaunted, the following week she traveled to Washington, D.C., where she joined more than 100 members of the Sunrise Movement, a youth-led climate group, to occupy the Senate Majority Leader’s Capitol Hill office. After a series of speeches and chants of “which side are you on,” Capitol Police tried to quell the rowdy crowd by issuing warnings, and then making arrests. Ultimately, 42 people were taken into custody—and their arrests put climate policy in the national spotlight.

Grigsby, who was not arrested, sees demonstrations like these as part of a longer-term political strategy. “We’re focusing on Mitch’s [Senate] election in 2020,” she says. “We’ve got to get him out.” Grigsby typically feels “hopeless” about politics; that day, she felt “unstoppable” instead.

Teens like Grigsby and Parks seem to be everywhere these days. They’re pursuing a novel legal strategy by suing the U.S. government for depriving them of their right to a safe climate. They’re instigating public confrontations that go viral, such as when Sen. Dianne Feinstein (D-CA) dismissed a teen’s pleas for climate action by saying “you didn’t vote for me.” (The backlash to her comments prompted her to clarify that she heard them “loud and clear.”) And in the case of Greta Thunberg, the Swedish 16-year-old who inspired the recent wave of school strikes, they’re being invited to address the United Nations Climate Change Conference and being nominated for the Nobel Peace Prize.

These teens are terrified that climate change is making our world unlivable. They have no patience for denial, inaction, or incremental progress. They want bold, radical solutions. And they’re prepared to fight any fossil fuel executive or politician standing in their way. 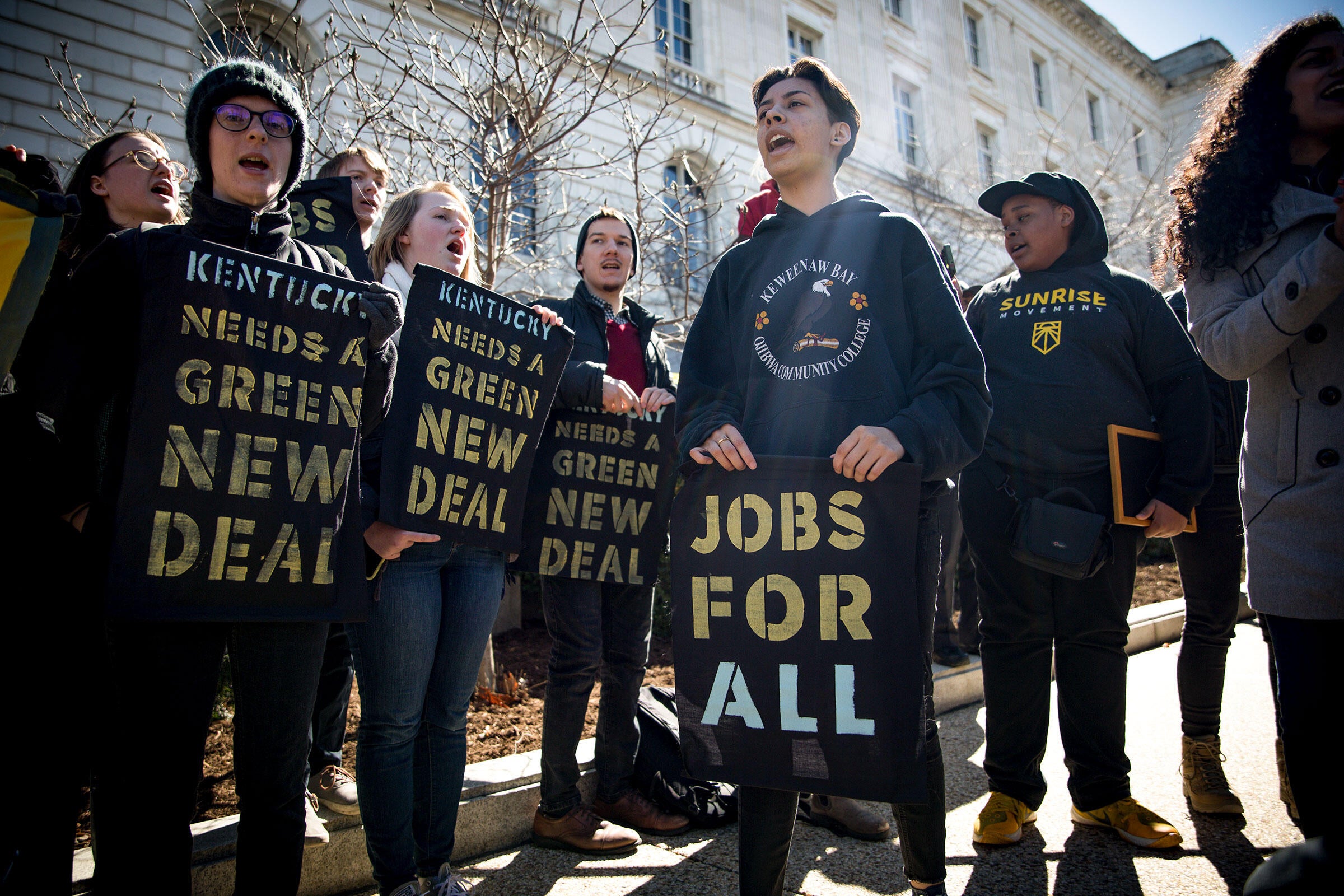 “I think everyone, especially in older generations, thinks that someone else is going to pick this up, someone else is going to deal with it,” says Leah Stokes, a political scientist at University of California, Santa Barbara, who studies climate change and social movements. “And young people just realize that nobody else is picking up the mess, there are no adults in the room.”

Teens feel an urgency around climate change that largely appears lacking among political and economic leaders—most of whom belong to, and are supported by, older generations who won’t experience the worst impacts to come.

Even as rising global temperatures stoke larger hurricanes and more frequent wildfires, these teens know that truly catastrophic damages—such as flooding of all the world’s coastal cities creating tens of millions of climate refugees—could occur within their lifetimes. They’ve grown up with the knowledge that half of all fossil fuel emissions have been released in the last 30 years, and that decades of stalled international negotiations and broken promises have failed to reverse the trend.

“We haven’t known a world where climate change isn’t an issue,” Maxime, an 18-year-old who took part in the school strikes in London, told Climate Home. “We’ve just watched people ignore it.” Alexandria Villaseñor, a 13-year-old who is co-director of the group Youth Climate Strike, which helped organize the U.S. school walkouts, explained to Elle that “We don't have enough time to wait until we're in positions of power. We have to force the world leaders right now to start taking action.”

The Our Children’s Trust lawsuit is attempting to do just that. Oregon lawyer Julia Olson filed the suit in 2015 on behalf of 21 children, teens, and young adults. In their short lives, they’ve already experienced a half-dozen hurricanes superpowered by warming oceans, two years of destructive West Coast wildfires, record sunny day flooding, and many other extreme weather events.

Therefore, the plaintiffs argue, the United States has failed to protect the constitutional rights of its young people.

The case alleges that the federal government has knowingly contributed to climate change by issuing mining permits for coal on federal land, for instance, and granting leases for offshore oil and gas exploration. Therefore, the plaintiffs argue, the United States has failed to protect the constitutional rights of its young people.

Vic Barrett, a 19-year-old plaintiff, argues that by supporting fossil fuel development, federal officials have prioritized the “interests of a few over the future stability of generations of young Americans.” The Trump administration has tried, and failed, five times to get the case dismissed. The lawsuit is currently tied up in legal skirmishes and is considered a long-shot by legal experts. Even if it fails, the case is already causing a high-level debate about how the legal system should respond to climate change. A ruling in favor of Barrett and the other plaintiffs, meanwhile, could result in federal courts forcing the government to take aggressive action on lowering greenhouse gas emissions.

Exactly what this aggressive action would entail is unclear. One possibility is something akin to the Green New Deal, a climate plan pushed by Sunrise youth activists that could, proponents say, invest trillions of dollars into renewable energy and low-carbon infrastructure while creating green jobs.

It’s also currently the only federal policy vision based explicitly on the United Nations’ warning that global emissions must be halved within 12 years to keep warming below 1.5 degrees Celsius—a top demand of the recent U.S. school strikes. “Nationally that’s what we’ve agreed on: We all want to support the backing of a Green New Deal,” Parks, the striker from Riverside, says.

That the Green New Deal is on the political agenda at all is due to the activism of teens and millennials. Sunrise activists gained national attention shortly after the November midterm elections by occupiying the Capitol Hill office of House Democratic Speaker Nancy Pelosi (D-CA). When newly elected Rep. Alexandria Ocasio-Cortez (D-NY) showed up, the protest became a major media event, and with the 29-year-old’s support, the idea of the U.S. government intervening in the economy to rapidly shift energy production away from fossil fuels rocketed onto the national stage. 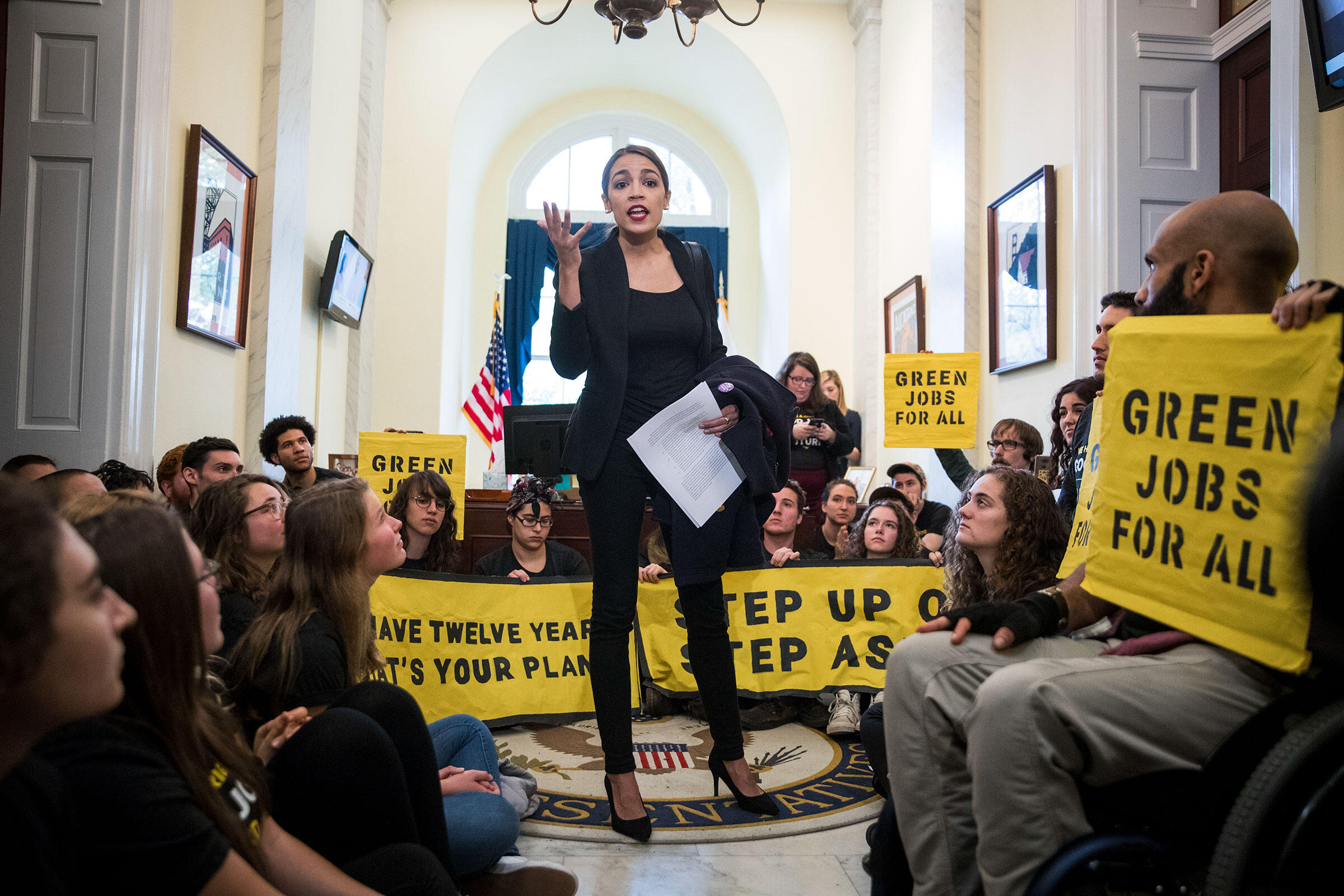 Already, the Green New Deal has inspired a flurry of counter-proposals from both sides of the aisle, all more aggressive than any federal climate policy in a decade. Sen. Lamar Alexander (R-TN) is calling for a “new Manhattan Project for clean energy.” Rep. Matt Gaetz (R-FL) is drafting a “Green Real Deal.” Rep. Paul Tonko (D-NY) is writing his own proposal—and these are just the start. “We should let a thousand climate proposals bloom,” Tonko told the Washington Post.

And that’s been the point all along: to force politicians to grapple with climate change in a meaningful way, whether through a Green New Deal or another similarly ambitious policy. “We’ve shifted the entire terrain,” says Matthew Miles Goodrich, a 25-year-old writer and Sunrise organizer.

The recent explosion of teen climate activism is about more than a single piece of legislation. The movement is bringing stark moral clarity to an issue that has long been defined by the technocratic language of markets, diplomacy, and technology. “For climate in particular, young people have the moral authority to say, ‘we are the ones who are going to have to live with the growing crisis, the worst impacts in our communities,’” says Carina Barnett-Loro, a senior program manager with the Climate Advocacy Lab, a climate advocacy research group founded in 2015.

This moral authority allows young people to call out political and business leaders and be taken seriously. Take Thunberg, the Swedish climate activist, who addressed delegates at the World Economic Forum in Davos, Switzerland in January. “Some people, some companies, some decision-makers, in particular, have known exactly what priceless values they have been sacrificing to continue making unimaginable amounts of money,” she said. “And I think many of you here today belong to that group of people.”

Establishing clear moral principles is only the first step.

Establishing clear moral principles is only the first step. Young activists will need to figure out how to translate their current momentum and visibility into political organizing and policy while staving off attacks from the fossil fuel industry and its allies (which have been relatively muted in the U.S. so far).

Parks acknowledges that the political and economic changes necessary to avoid catastrophic climate change are “not going to just start with one day of action.” That’s why he’s working with the Sierra Club to pass legislation to make the air in his community, and across California, less deadly to breathe. “We have to continue with the same energy,” he says.

Grigsby is looking forward to casting her first vote in the 2020 federal election. With many leading Democratic presidential candidates supporting the Green New Deal, she’ll be working with the Sunrise Movement to “get one of those people elected as president,” she says. She’ll also be helping register Kentucky voters. “It’s making sure we get good turnout so we can get [Senator McConnell] out of office,” she says.

These are daunting goals for anyone, much less for people who haven’t graduated high school; some can’t yet drive. But the University of California’s Stokes believes today’s teenage climate activists could have a long-lasting influence. “There’s a moral authority that they are just unlocking in a really powerful way,” she says.

“I don’t think this a one-off; the problem doesn’t go away tomorrow,” Stokes says. “These kids want to feel like there’s going to be a future for them.”

We’ll be hearing more from them shortly: Teen climate organizers are already planning another massive school walkout for May 3. “We strike again,” their website reads. “Stay tuned.”

Spread the word. It’s the least you can do. <a href="https://www.face