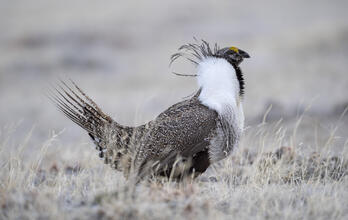 Some environmentalists thought that federal wildlife officials made a serious mistake when they decided, in 2015, not to list the Greater Sage-Grouse as threatened or endangered under the Endangered Species Act (ESA). Given all the habitat the species has lost in its 11-state range since then, plenty of advocates still think the feds should list it.

In reality, however, designating the bird as threatened or endangered wasn’t an option back then, and it still isn’t today. In 2014, Republicans in Congress prohibited the U.S. Fish and Wildlife Service (FWS) from listing sage-grouse under the ESA by tucking a snippet of text to that effect into a sprawling bill to fund the federal government. Supporters of the budget rider, as such provisions are known, described it as a way to respect state and local conservation efforts. Despite environmental groups’ repeated efforts to pry it out of subsequent budgets, the rider has remained stubbornly in place ever since.

But maybe not for long. The rider was nowhere to be found in a bill the House Committee on Appropriations passed earlier this month to fund Department of the Interior programs and agencies in 2022, including FWS. That could change before Congress passes the bill, but for now sage-grouse advocates are optimistic.

“There's really no reason this rider should reappear,” says Steve Holmer, vice president of policy at the American Bird Conservancy, one of 80 green groups that urged congressional leaders to ditch the no-listing language in a May letter. “As far as we’re concerned, it’s dead unless someone goes out of their way to put it back in.”

A handful of House Republicans moved on Wednesday to do just that. Reps. Dan Newhouse of Washington, Doug LaMalfa of California, and Mike Simpson of Idaho offered an amendment to add the rider back into the bill. Rep. Lauren Boebert of Colorado proposed a similar measure. “Congressman Simpson strongly believes the language he has added to the Interior appropriations bill for the last seven years is still necessary to prevent the sage grouse from being listed,” said Nikki Wallace, Simpson’s communications director, in an email to Audubon. “Listing the species will do nothing to increase their numbers, but it will have a major negative impact on our ranchers.”

Those amendments stand very little chance of surviving a vote from the full, Democrat-held House, expected next week. Advocates are also urging the Senate, where Democrats hold the slimmest possible majority, to squash the rider. Lawmakers should get out of the way and let FWS do its job based on the best available science, not politics, they say.

The latest science says that Greater Sage-Grouse, and the 350 other species that depend on sagebrush habitat, are in an increasingly tight spot.

The latest science says that Greater Sage-Grouse, and the 350 other species that depend on sagebrush habitat, are in an increasingly tight spot. A federal study in March revealed that sage-grouse populations have plummeted by 80 percent since 1965, with half of that decline occurring since 2002. Wildfires, oil and gas activity, and other forms of development are still taking big bites out of the sagebrush ecosystem.

“Given the alarming declines in sage-grouse populations and mounting threats to the species and its habitat, the federal government, states and partners should have all options available to conserve and recover grouse—and to prevent its extinction,” said Mark Salvo, program director at the Oregon Natural Desert Association, in an email. “This Congress has an opportunity to ensure federal agencies have the authority, direction and resources to support this goal.”

While scrapping the rider would clear the way for an ESA listing, some conservationists view it primarily as a way to motivate the various stakeholders who live and work in sage-grouse country to conserve and restore more habitat. The threat of a listing, and the new restrictions it would put on a range of land uses, spurred energy companies, ranchers, states, and others to reach a landmark agreement in which they committed to conservation measures in lieu of a listing. Based on the assurances in that deal, the FWS decided in 2015 not to list the bird.

Since then, however, sage-grouse numbers and sagebrush habitat have continued to decline. As part of its effort to invigorate industries like mining and fossil-fuel extraction, the Trump administration dramatically weakened protections that were central to the 2015 agreement and aggressively leased much of the bird’s best habitat. Courts have since intervened, putting the administration’s rollbacks on hold and invalidating many of those controversial leases.

If the no-listing rider returns to the spending bill, states that host sage-grouse will have less incentive to reverse those losses by getting tough on industries important to their economies but threatening to the bird, says Brian Rutledge, recently retired director of Audubon’s Sagebrush Ecosystem Initiative. “The fact that we removed the threat of listing removed a lot of the pressure on the states to do their share,” he says. “If they don’t think the bird can get listed, they don’t think they need to focus on it.”

The Biden administration, meanwhile, is preparing its own approach to managing the species. In a May update on its website, the Bureau of Land Management said it is working with other agencies “to assess the best available science and what actions are needed to conserve sage-grouse and sagebrush.”

Biden’s budget plan for the next fiscal year removes the sage-grouse rider. If Congress follows suit, a listing for the species will once again be a real possibility. How stakeholders across the West respond to that new reality will shape the future for this vulnerable bird and its vanishing sagebrush home.