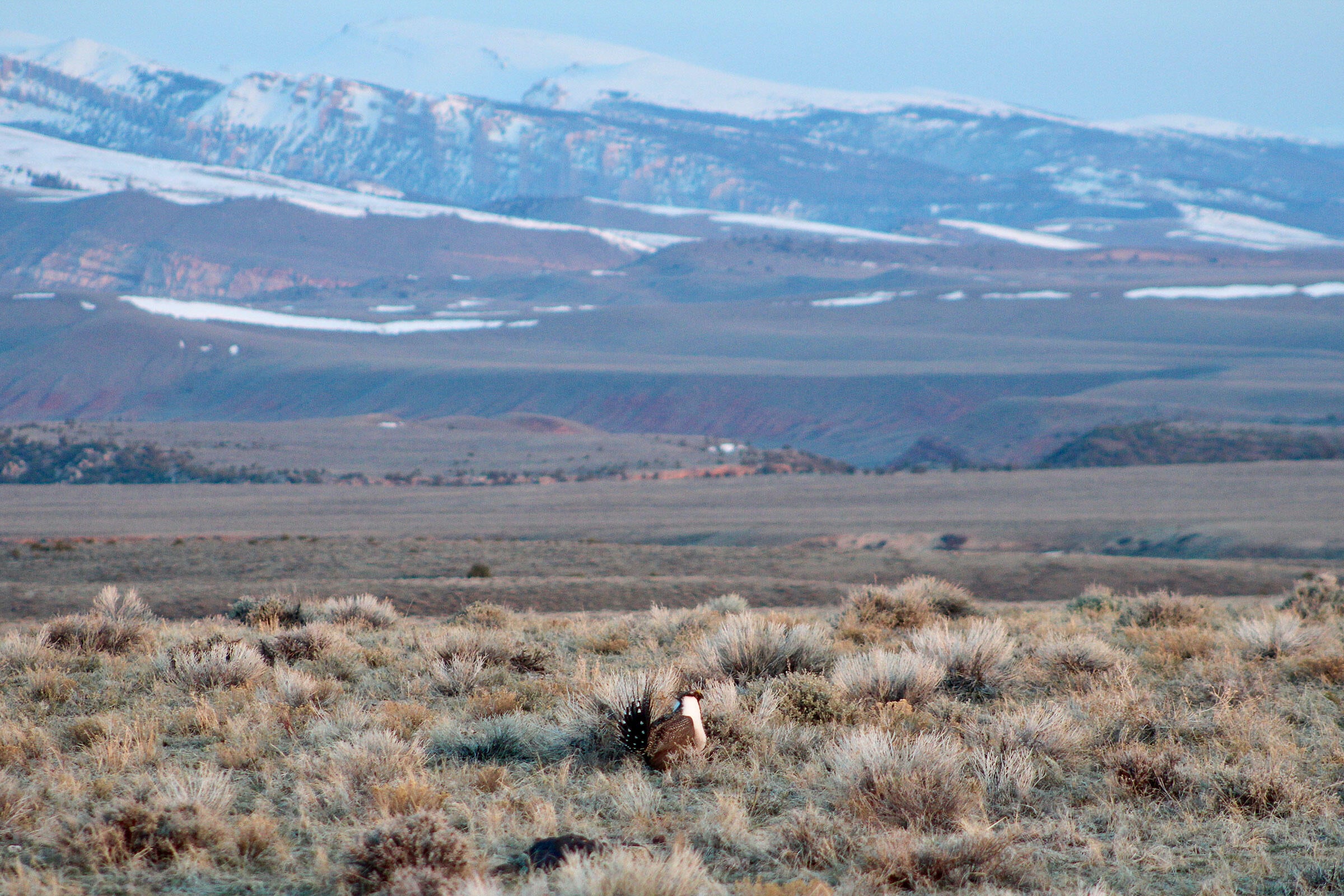 Greater Sage-Grouse have lost half of their original range and more than 90 percent of their historic population. Photo: Angela Burgess/USFWS

The U.S. Department of the Interior this week is offering oil and gas companies drilling rights on 758,198 acres of federal land in Wyoming. Despite a 2015 agreement to steer energy development away from areas where Greater Sage-Grouse dwell, everything on the auction block—each of the 565 parcels on offer—falls within the bird’s habitat. Nearly half of the land up for grabs is in so-called Priority Habitat Management Areas, sites identified by the government as having the highest conservation value for safeguarding the species, according to an assessment by Interior’s Bureau of Land Management (BLM).

The acreage in question is “some of the most important sage-grouse habitat on the planet,” says Brian Rutledge, director of Audubon’s Sagebrush Ecosystem Initiative. He’s especially concerned about parcels near Wyoming’s South Pass, which host the world’s highest density of sage-grouse. “That’s how aggressive they are being about trying to sell off the development rights on critical habitat for sage-grouse. This is a direct attempt to annihilate the conservation efforts that went before.”

Oil and gas drillers welcome the new opportunities. “Many of the leases are finally being offered for sale after being held up for years, so companies will be eager to finally move forward,” Kathleen Sgamma, president of the Western Energy Alliance—an industry group that wields strong influence at Interior—wrote in an email to Audubon. The leases will include certain restrictions on development, she noted, such as minimum distances between wells and the sage-grouse mating areas known as leks. “The Trump Administration is merely moving forward with leasing that does both—develops vital energy sources while protecting the sage-grouse.”

This week’s sale is the latest in a series of Interior actions that opponents say further imperil a species that has lost more than 90 percent of its historic population and nearly half its original range due to road-building, oil and gas development, and other disturbance. In 2015, a hard-won compromise to keep Greater Sage-Grouse off the endangered species list was enshrined in a set of management plans. One of the basic principles of those plans is that, when selling oil and gas rights, the BLM will prioritize areas outside sage-grouse habitat. But in one action after another, the Trump administration has pulled the teeth from that policy. In December, the BLM announced changes that will strip protections from roughly 9 million acres across the West that were designated as crucial sage-grouse habitat in the earlier plans.

Until those changes are finalized, though, the 2015 plans remain the law of the land. Conservationists say Interior is breaking the law by ignoring its commitments in those plans and offering leases in key sage-grouse habitat. They detailed their arguments in a pair of lawsuits against the administration last April, one of which included the National Audubon Society as a plaintiff.

While neither lawsuit has yet been resolved, the suit led by the Center for Biological Diversity and the Western Watersheds Project sparked a preliminary injunction that delayed until this week the Wyoming lease sale, originally scheduled for December. At issue was a January 2018 BLM memo aimed at speeding up lease sales, which let field staff decide whether to invite public participation and shortened the window for the public to file formal opposition documents called protests.

Explaining the injunction, Chief Magistrate Judge Ronald Bush in the U.S. District Court for the District of Idaho wrote that there was “significant evidence indicating that BLM made an intentional decision to limit the opportunity for (and even in some circumstances to preclude entirely) any contemporaneous public involvement in decisions concerning whether to grant oil and gas leases on federal lands.” Bush ordered the BLM to return to Obama-era guidelines for public input in areas with sage-grouse habitat. That led the BLM to pull more than a million acres out of its December offerings in four states to allow for more public input before the auctions. Most of the Wyoming parcels were rescheduled for this week’s special sale, while those in other states were added to regularly scheduled sales in March.

Conservation groups used that public-comment window to submit protests opposing the leases in sage-grouse habitat; these formal documents are separate from the lawsuits but may be incorporated into them. Audubon joined the Wilderness Society, the Wyoming Outdoor Council, and the Wyoming Wilderness Association in filing a protest last month over this week’s sale.

Among other objections, the groups argue that BLM—which oversees about 45 percent of the bird’s remaining range—has failed to prioritize leasing outside sage-grouse habitat and hasn’t taken the legally required hard look at the environmental impacts of the leasing plan. What’s more, it hasn’t considered the cumulative impact of other lease sales and drilling projects. Instead of weighing the environmental impacts of this week’s leases in isolation, they assert, BLM should recognize that more than 1.3 million acres of priority habitat are already under lease in Wyoming, and recent sales have offered up hundreds of thousands more.

Sage-grouse aren’t the only wildlife at risk.

Sage-grouse aren’t the only wildlife at risk, the protests note. The leases also include winter range and migration routes for mule deer and pronghorn. Some 350 plant and animal species, including birds like Brewer’s Sparrow, Loggerhead Shrike, and Sage Thrasher, depend on sagebrush habitat.

Despite those concerns, BLM last week dismissed or denied protests from several groups.

“They didn’t do what we would argue is required under the sage-grouse plans that are still in place, which is to actually take a look at what grouse habitats would be affected and, rather than sacrificing all of them, determine which ones are too important to lease,” says Michael Saul, a senior attorney with the Center for Biological Diversity, which also filed a protest over the leases. “It’s essentially a massive fire sale of sage-grouse habitat to try and get it all leased while such a radically pro-oil-and-gas faction is in charge of the Interior Department.”

Asked for comment, BLM spokesman Brad Purdy said in an email that the bureau was in full compliance with the preliminary injunction. “BLM cannot comment further on matters in litigation,” he said.

For the moment, BLM shows no signs of stopping its sell-off of sage-grouse habitat; lease sales set for March include hundreds of thousands of acres of the bird’s territory in five states. If the administration formally rolls back sage-grouse protections next month as expected, more lawsuits will likely follow, says Audubon’s Rutledge. “That’s when the fighting will really start.”