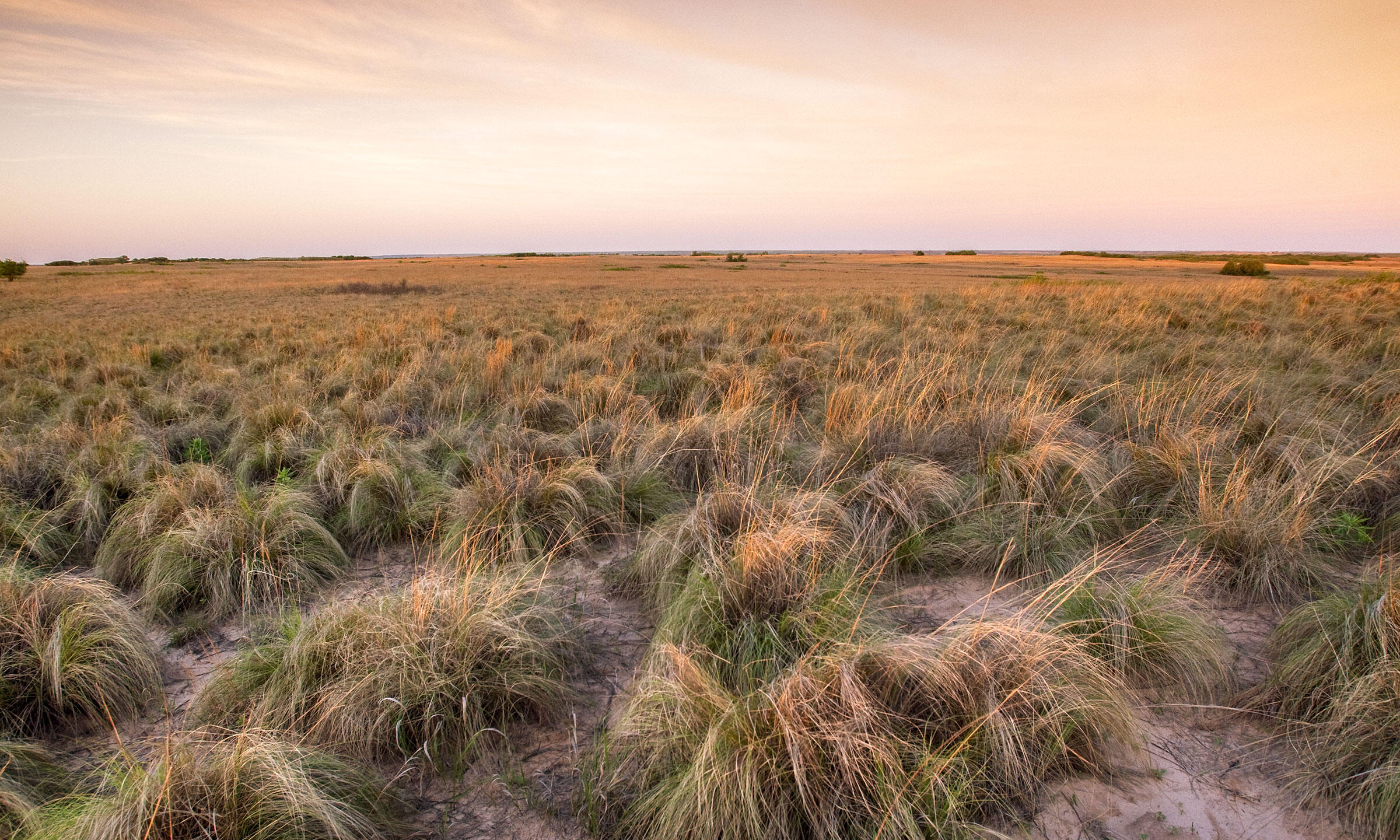 It wouldn’t be much fun to share a seesaw with a copy of the Agriculture Improvement Act of 2018, otherwise known as the farm bill. The 800-plus-page behemoth packs a lot in, including the SNAP food assistance program, crop insurance policy, organic certification, and new-farmer recruitment. It also includes the biggest pot of federal money for conservation on private lands, which make up more than two-thirds of the Lower 48. That makes it a big deal for birds and birders.

Congress agreed last week on the latest version of the legislation—it gets updated about every five years—and it now awaits President Trump’s signature. With $867 billion in spending over 10 years, the bill is too big and complicated to completely satisfy everyone, but reaction has been largely positive. Agriculture groups say it provides welcome certainty at a time when, thanks to trade disputes and low crop prices, “the farm economy stinks,” as the head of the corn lobby put it. Advocates for low-income Americans are glad the final bill ditched a House proposal to add work requirements for SNAP recipients.

Green groups, too, have praised the deal. “This Farm Bill will not only benefit America’s hardworking farmers and ranchers, but it also will help address America’s wildlife crisis by improving key conservation programs and increasing investments in wildlife habitat on working lands,” Collin O’Mara, president and CEO of the National Wildlife Federation (NWF), said in a statement. Nature Conservancy CEO Mark Tercek called it "a bill that will help farmers, ranchers and forest owners become more sustainable and productive, while protecting lands and waters for the benefit of all Americans and wildlife."

Perhaps the biggest win for environmentalists is what’s not in the bill. An earlier House version would have cut conservation programs by $795 million, repealed the Obama-era Clean Water Rule, and lifted some Endangered Species Act requirements. But those controversial measures were cut from the final version, and it maintains conservation funding at around $60 billion over 10 years.

“This bill, especially from a conservation perspective, was always about holding the line,” says Julie Grogan-Brown, policy manager for working lands at the National Audubon Society. The goal for Audubon and partners, she says, was to stop the proposed rollbacks and tweak some programs to help wildlife. “And really, we succeeded hugely in both of those things.”

Another piece of the bill earning plaudits from the green contingent is an expansion of the Conservation Reserve Program. CRP pays farmers to take sensitive land out of crop production temporarily, and instead plant grasses or other vegetation that’s good for wildlife and water quality. The program now has an enrollment cap of 24 million acres, but the new farm bill ramps that up to 27 million acres by 2023. That’s a lot of extra habitat for birds like Henslow’s Sparrow, which would be on the endangered species list without CRP, according to Jim Herkert, executive director of the Illinois Audubon Society.

A change to the Regional Conservation Partnership Program likewise drew cheers. The program pairs producers with conservation experts to find solutions to environmental problems. Audubon California has partnered with rice growers to create much-needed wetland habitat for Black-necked Stilts and other water birds, for example, and helped dairy farmers plan their wheat harvests to avoid disturbing Tricolored Blackbirds when they nest. Until now, RCPP has drawn funding from other farm bill programs. But the new legislation instead provides a dedicated $300 million per year and cuts red tape for would-be participants. “It means there are fewer roadblocks for creative partnerships, and it means farmers can more easily and flexibly make the improvements that are needed on their lands,” Grogan-Brown says.

Birds also get a boost in the Environmental Quality Incentives Program, or EQIP. The program provides funding and on-the-ground help for farmers and ranchers to adopt a variety of environmentally friendly practices on working lands—growing monarch butterfly habitat, planting cover crops, or installing solar-powered electric fencing for managed grazing, for example. The previous farm bill required that at least 5 percent of EQIP funding be dedicated to projects designed to help wildlife; the new bill doubles that minimum requirement to 10 percent. “This will dramatically increase the amount of money available for farmers and ranchers to create wildlife habitat for species such as the greater sage grouse and monarch butterfly on working lands,” according to NWF.

On top of those changes, the bill bumps up funding for an easement program that helps preserve wetlands; dedicates $50 million a year for landscape-scale conservation efforts to promote sustainable water use in drought-prone areas; and expands a partnership between federal farm and wildlife agencies that funds targeted habitat improvements for Greater Sage-Grouse, Lesser Prairie-Chicken, Golden-winged Warbler, and other species.

Although a deal has been reached, the work isn’t done. The bill outlines farm policy for the next five years, but a push-and-pull among conservation groups, the agriculture industry, and others will fill in the details and determine how these programs actually get implemented on the ground. It’s complex stuff, but one thing is clear: The latest farm bill is a rare piece of good news for wildlife. 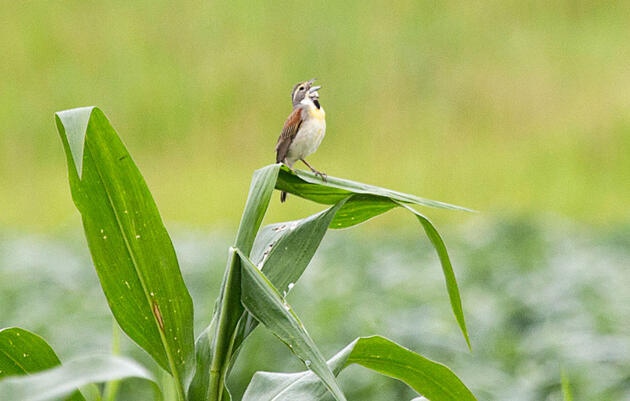 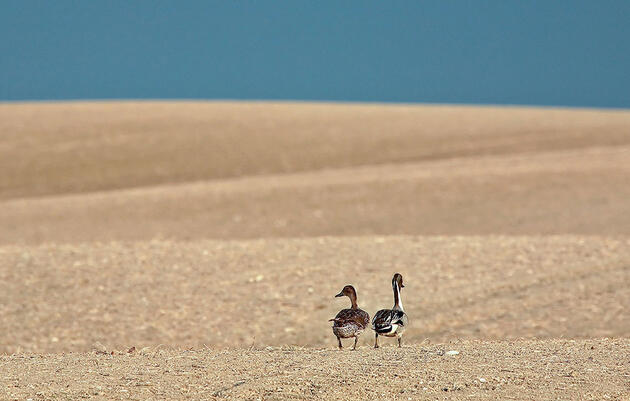 Meet Eight Birds That Depend on the Farm Bill

From North Carolina forests to California rice fields, the farm bill is a powerful tool for protecting and restoring avian habitat. As Congress begins rewriting the legislation, birders should pay close attention. 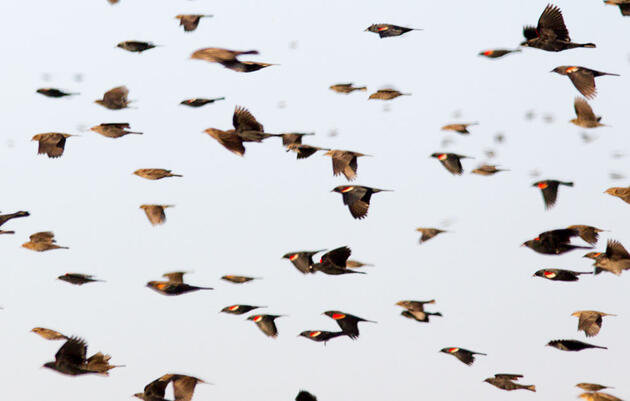 Data collected from a triennial spring survey has helped gain the birds state-wide protections. Now they're being considered for a federal listing.