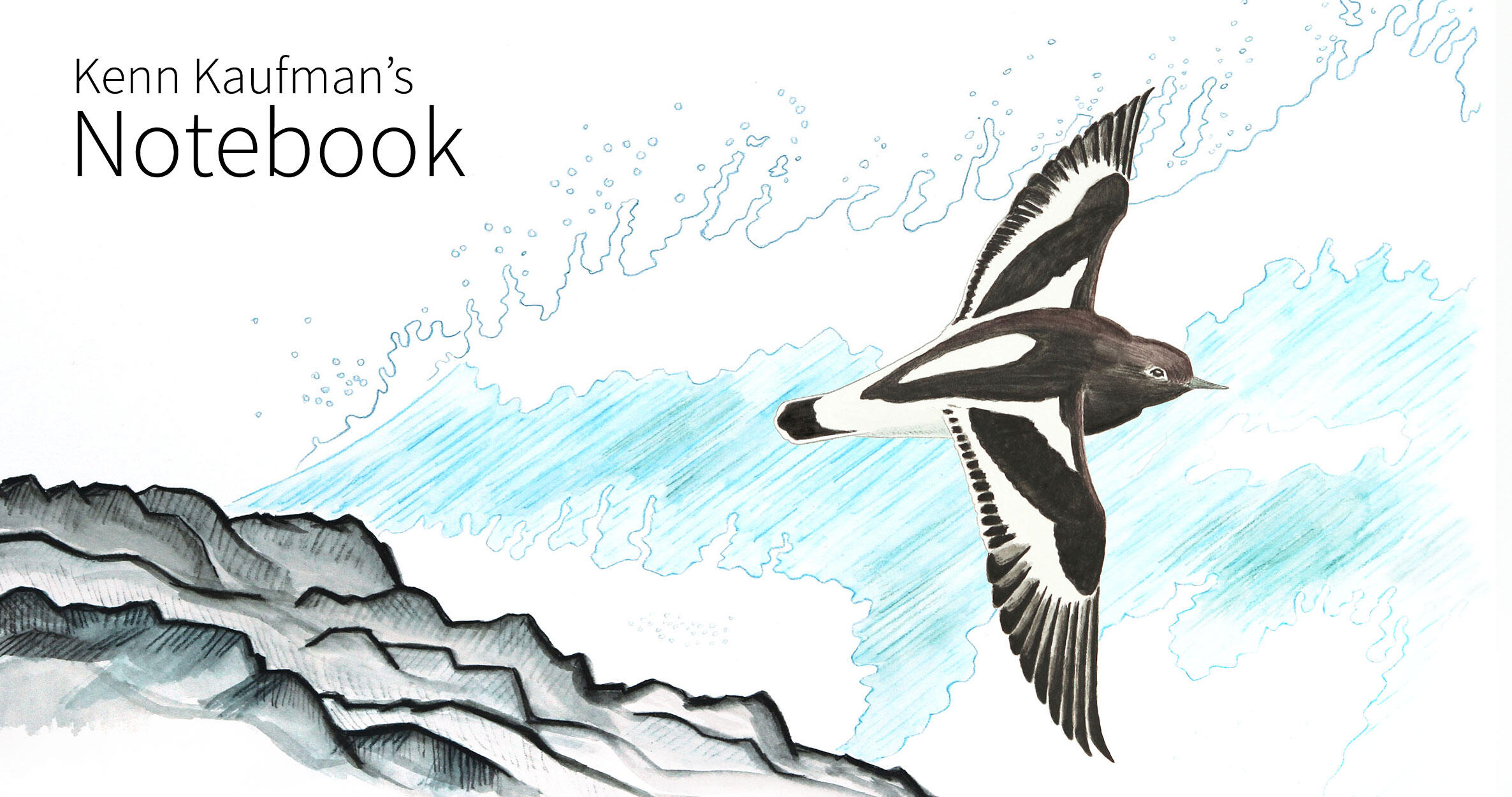 One of the most interesting things about the Black Turnstone is the fact that it’s not a Ruddy Turnstone. That might sound like a slam, but it’s not. It’s just interesting.

Ruddy Turnstones are found worldwide. They tend to be scarce inland, but they’re omnipresent in coastal regions: stout little sandpipers, puttering along on short orange legs and using their wedge-shaped beaks to flip small rocks, the action that earned the “turnstone” name. As a traveling birder, I’ve seen Ruddy Turnstones on Cape Cod, on the Florida Keys, on the beach in San Diego. I’ve seen them with other shorebirds on the coast of South Africa, and along the waterfront south of Sydney on my first morning in Australia. It was no surprise to see them on the islands of Jamaica, New Zealand, and the Galapagos, as well as on the shores of Portugal, China, and Peru. Everywhere I went in coastal zones, it seemed, Ruddy Turnstones were there too.

So the Ruddy Turnstone is a familiar sight on six continents and many oceanic islands. And then there’s the Black Turnstone. It lives only in a very narrow strip along the Pacific Coast of North America. These are the only two turnstone species in the world. The contrast in their range maps is stunning and largely unexplained. But if we look at Black Turnstones in the context of their winter habitat, we see one obvious adaptation to this zone: It’s all about camo.

First, a word about their total range. Unlike most things we call “shorebirds,” Black Turnstones really are limited to the shore. Most other shorebird species may migrate through the interior, or may fly to nesting territories hundreds of miles inland from the coast. Black Turnstones nest only along the western shoreline of Alaska and nowhere else. When I led birding tours to Alaska every summer, we made a point of looking for these birds along the immediate coast near Nome, at rocky river mouths or on rocks at the inlet to Safety Sound. Ruddy Turnstones might be anywhere on the tundra, but we saw Black Turnstones only within a mile of the sea.

And Black Turnstones continue to hug the coastline at all seasons. In fall and winter, they spread out, a scattered sprinkling of birds, from southern Alaska down the shoreline to western Mexico. Along the way, they seldom stray inland; it’s a big deal for birders to find one even a few miles inland from the ocean. The exception is at Salton Sea, in the deserts of southern California, where birders turn up a few almost every year, suggesting that some turnstones take an overland route to the Gulf of California rather than flying all the way around the Baja peninsula.

The idea of “limitations” may have a negative vibe for humans, but for Black Turnstones, a limited range means that they match their usual surroundings. They get out on open mudflats at times, especially among lines of seaweed on shore; but 90 percent of the time that I see them, they’re on black coastal rocks where they blend in perfectly. They clamber about on short, stocky legs, poking and prodding at limpets and barnacles. They share these dark, rocky places with other specialized shorebirds, including Black Oystercatchers, Surfbirds, Wandering Tattlers, and (in the north) Rock Sandpipers. All of these are blackish to gray and relatively plain, at least in non-breeding plumage. Coincidence? I doubt it. Predators like Peregrine Falcons range these coastlines also, watching for prey, and good camouflage can make a life-or-death difference for a small, plump bird.

One of my favorite places to watch all these shorebirds of rocky coasts is at Point Pinos, at the edge of California’s famed Monterey Bay. Point Pinos is a fantastic birding spot every day of the year, a vantage point for watching a constant parade of birds along the water's edge and offshore. Pelicans, gulls, cormorants, loons, grebes, egrets, terns, murres, guillemots, auklets, even seabirds like shearwaters and jaegers, all pass in review. In this busy scene, the hardest birds to see are the Black Turnstones. They may be here 10 months of the year, from late July to early May, but they’re incredibly easy to overlook. Scan carefully among the boulders near the breaking surf, all around the point, and eventually you’ll find them: chunky little blobs, small dark birds, almost invisible among the huge dark rocks.

But then . . . the bird takes off, revealing a snazzy, stunning pattern of black and white. It is a stark contrast from the bird's drabber plumage, so perfectly suited to disguise it among the rocks, and isolated on the page in a bird guide, the wings scream for attention. But the last time I watched the turnstones at Point Pinos, I realized that the flight pattern carries its own form of concealment. As waves pounded on the black boulders and sent white spray flying, everything in the air just above the rocks was a jumbled, moving maze of dark and light. Small black-and-white turnstones, flying through the splatter and spray, seemed to disappear before my eyes, masters of camouflage after all.