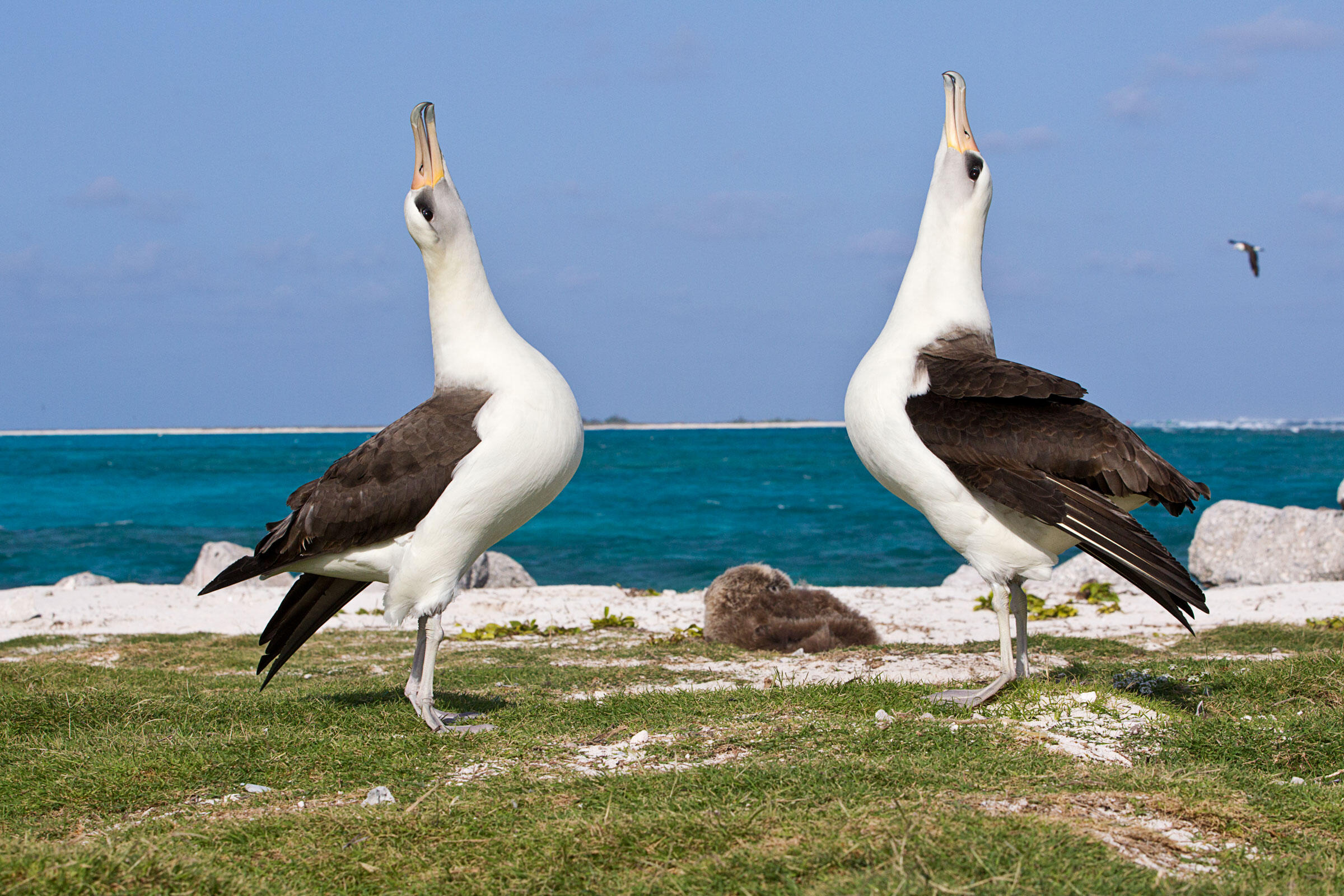 During the nesting season, Laysan Albatross seeking mates perform complex courtship dances to attract other birds. Because they mate for life, the albatross are understandably selective and try out several dance partners over the breeding season. For photographers, capturing the entirety of these courtship dances can result in a compelling series of images. Photo: Roberta Olenick

Romantic avian rituals are as alluring for photographers as they are for birds. Here's what to watch for so that you can capture the moment.

Spring is here and love is in the air—not just for human romantics but also for birds of all kinds. Images of avian courtship and mating are among the most compelling, unique, and challenging to capture. Some behaviors last only a split second, so it’s important to know what to look for and be primed to photograph it. While not every feathered pair will perform all (or even any) of the following behaviors, if you do see any start to happen get that shutter finger ready.

Birds will often preen, or be preened by, their mate, especially on the head and neck—areas that are hard for a bird to reach on itself. Albatrosses, crows, doves, finches, gannets, gulls, owls, terns, vultures, and many other birds allopreen. Take lots of shots of this tender behavior to ensure you get at least some with the eyes of both birds visible.

Some birds perform daring feats of flight to impress their mates. A male Anna’s Hummingbird will fly as high as 130 feet, and then plummet straight down past the watching female. At the lowest point of his dive, he rapidly spreads and closes his tail feathers to create a high-pitched sound, then makes an upward U-turn to hover and sing before his intended. Because hummers are small and fast, you might want to try video for capturing this behavior. Many raptors also perform aerial displays, such as the “spiral of death” seen in Bald Eagles. Here male and female lock talons at high altitude and then cartwheel downward, letting go of each other before hitting the ground.

These theatrical courtship displays involve complex sequences of movement. As part of their synchronized aquatic ballet, pairs of Western and Clark’s Grebes “rush” side by side over the surface of the water with their bodies upright, wings back, necks gracefully arched, and lobed feet paddling. Have your camera ready and set at a fast shutter speed; “rushing” grebes can cover 65 feet in just seven seconds.

Albatross dances, among the most complex courtship behaviors of any species on Earth, involve a diversity of moves. In Laysan and Black-footed Albatrosses, these include head bobbing, head shaking, bill jousting, bill clapping, coy bill tucks into half-spread wings, and sky pointing while standing up on webbed tippy toes. Try to get photos of each of these different moves in sequence, or take video which will not only record the frantic pace of these seabirds’ choreography but also the high-pitched whistles and moans that accompany it.

The males of lekking species assemble at traditional mating grounds, or leks, where they display communally to attract and compete for females. In North America, lek mating occurs in five prairie-dwelling grouse species. Male Greater Sage-Grouse fan their tapered tail feathers, droop their wings, puff out their chests, inflate two large yellow chest sacs, then tilt their heads back and rapidly deflate the air sacs to produce popping sounds audible nearly two miles away. Females assess the displays, select a male, mate, and then leave without any further contact with him.

Photographing lekking grouse is an experience not to be missed, but you must take proper precautions because these birds are easily flushed. For the morning display, arrive at the lek more than an hour before dawn and do not leave until after the last bird has gone. Be sure to also keep your distance; always shoot from inside your vehicle or from a blind; stay quiet; and move slowly. For more on photographing leks, check out these expert tips.

<<You can help! The Greater Sage-grouse is just one of the many species that benefit from Audubon's conservation efforts across the country. Support birds, our work, and the work of others by telling your congressperson to support conservation programs today.>>

During breeding season, watch not only for adults feeding chicks but also for adults feeding adults. In almost all cases, the male does the feeding; this not only cements the pair bond, it also provides his mate with extra nutrition needed for egg laying. When photographing this behavior, keeping your camera parallel to the two birds will increase the chances that both will be sharply in focus.

Feeding is part of courtship in virtually all gulls and terns. Female finches may invite male feeding by fluttering their wings the way food-begging chicks do. Female Greater Roadrunners typically spurn the copulatory advances of their mate if he offers a mere insect but usually accept his invitation when his gift is a nice hearty reptile or rodent.

Singing and other vocalizations play a role in courtship for many birds. Sounds can help photographers locate courting birds that are relatively cryptic—for example, those with subtle, easily overlooked physical displays such as songbirds, as well as birds that are crepuscular or nocturnal such as owls. Courting Barred Owls fill the night with a duet of cackles, hoots, caws, and gurgles.

But not all sounds used to attract mates are vocal. From a log or other platform, male Ruffed Grouse generate alluring thrumming sounds by rapidly flapping their wings in front of their bodies. Common Nighthawks, Wilson’s Snipes, and Anna’s Hummingbirds (see above) generate sounds through air movement over feathers during display flights.

The actual moment of copulation lasts a few seconds or less in many bird species—an easy shot to miss. In some species, specific behaviors indicate that the brief “cloacal kiss” is imminent, so if you see those signs start motor driving to capture the peak of the action. Mourning Dove courtship includes the male walking a circle around the female, both birds puffing up breast feathers, and allopreening, all lovely behaviours to photograph. But if you are after an image of doves actually doing it, watch closely for the brief moment when the two lock beaks; mating usually follows right after.

American Avocets are one of a variety of species where females signal their readiness to mate by adopting a “solicitation posture” with head lowered and neck extended forward. Wading beside her in the shallow water, the male avocet responds with a frenzy of preening and splashing with his long beak before hopping up to balance on her back to copulate. But the best photo op comes immediately afterward: That’s when the two take a few steps together with their beaks crossed and one of his wings spread over her back.

In the avian world, there are as many forms of feathered flirtation as there are species. The best preparation for photographing these behaviours is to research the bird you are after before heading out to the field. Read, study photos, and watch online videos. Useful places to start include: The Birder’s Handbook by Paul Ehrlich, David Dobkin and Darryl Wheye; the Cornell Lab of Ornithology website, and of course, the online Audubon Guide to North American Birds.

One last critical point. Avian courtship and mating rituals are truly enticing to watch and photograph, but those rituals must not be disturbed. Breeding season is a particularly vulnerable time for birds. So keep your distance, remain unobtrusive, and back off if your presence is impacting them in any way. The needs of the birds should always take precedence over the wants of photographers and other voyeurs.

Roberta Olenick is a zoologist and photographer in Vancouver, British Columbia.

​Audubon is a nonprofit, and stories like this are made possible by readers like you. Donate or subscribe today to help fund our journalism and conservation work.

Why You Need to Start Digiscoping

Add a camera or a cellphone to a scope and discover a whole new way of documenting nature. Here are some tips to get started.

Migrant traps aren't just a boon to birds—they put photographers in a sweet spot too.